Only three to poddle today, Jane, aka the slowest rider in Wheeleasy, Rachel and Barbara both recently retired and still getting used to having time to themselves. Off we went to Boroughbridge through Knaresborough, Ferrensby and on to Marton cum Grafton before reaching the Bean coffee stop. The cheese scones were just perfect and over the coffee chat Barbara and Rachel found they were practically related, both having daughters who attended the same school at the same time. A quick text, one to Brussels and one to London established the girls had sat next to each other for A level French! Christmas meetings were mentioned before we had to make tracks for home.
We parted company at the lane leading down from the Ferrensby road towards Knaresborough. I continued straight on heading for Scotton and home whilst Rachel and Barbara returned through Knaresborough. The weather was perfect if a little windy and we had a lovely time! Jane K 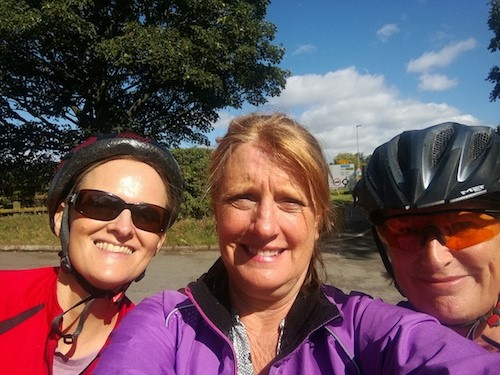 A good gathering of riders at Hornbeam this morning, a few Poddlers, Wednesday riders and nineteen Wanderers ready to set off.
Once again, a faster group of eight riders were organised setting of first (this seemed to work well) and picking up another rider on route. The rest set off towards Crimple, Spofforth and Little Ribston, Dennis left here to go back through Knaresborough. Then taking the A168 cycle path to Walshford on through Cattle, Whixley then stopping for coffee at Tancred where we met up with the faster group. Back through Great Ouseburn, Arkendale and Ferrensby in a slight head wind but it was warm, the sun was out and looking up at the trees they were starting to turn into the Autumn colours.
At Knaresborough we took the Abbey Road, Waterside route to the bottom of Knaresborough Hill, a couple of riders went the Beryl Burton way while the rest went up the hill then at the golf club split up to go different ways home. Thanks to Joe for back marking and Karen for her stint from Arkendale. 33miles. ChrisR 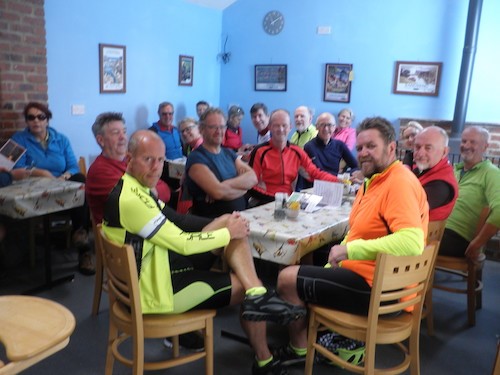 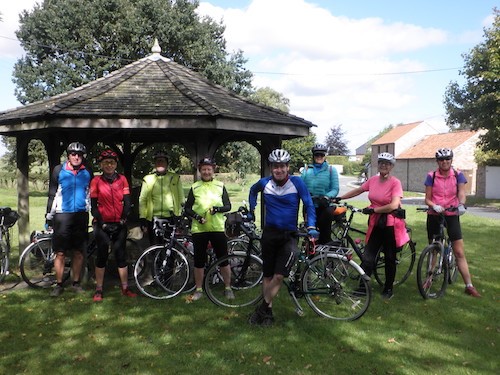 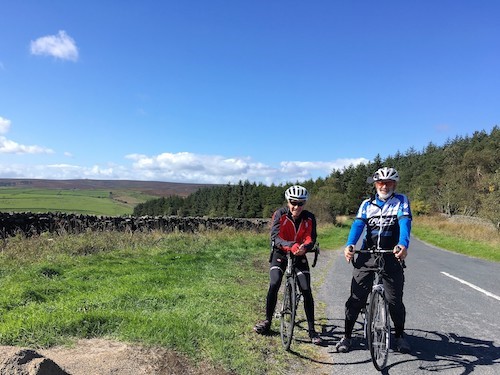 It was an excellent weather forecast, however a rider from Harlow Hill was sorely tempted not to range far, but to ride up and down Beckwith Road to get the miles in on a surface that was the best its been in 50 years. Temptation resisted it was down to Low Bridge where despite a few notable absentees we had a fair turnout.
It had been suggested Tadcaster for our first coffee stop, a few riders thought they might not make that destination but might head for Wetherby, however the good old British compromise prevailed and we headed for Thorpe Arch Cafe.
On Waterside we were joined by Dave Watson (good to see you Dave) and away we went splitting up in groups to suit our needs. Dave Watson left us at the B1224 to return home.
A magnificent seven, comprising Colin, Chris (team captain), Dave P, Marvin, Nick, Peter and Tim entered the cafe via Rudgate and a Good Hand comprising thee, Bob S, Norman and Theo via Wetherby.
The ride had been good but the chat was even better, the subjects ranged from Red and Yellow Cards for Tennis players, the shape of sails, and carbon fibres to molecular chains (must get one on my bike). We enjoyed ourselves so much that Marvin suggested we stay for lunch, but all good things have to end.
The “A” team with Chris in control headed somewhere, the three became a four with DP and headed to Wetherby via the cycle track.The four then became a three heading for Spofforth with DP on to the ridge and Kirkby Overblow.
Excellent weather, ride and company with both the A & B teams taking refreshment together. Dave P

It was 10.07am when the nine-strong A team set out from Slaidburn, after scoffing bacon butties and coffee, and after the full group photo. I assume the VIP group set off at their appointed time eight minutes behind us, and we managed to keep this time buffer throughout the day.
The weather was a bit nippy and damp to start with, so the roads were wet and muddy in places, but the weather improved as the day progressed, and we removed some jackets later on. We have to admit – through gritted teeth – the scenery was wonderful despite being on the wrong side of the Pennines, and several times we stopped to admire the wide panorama stretching from Blackpool Tower, through Poulton-le Fylde, Cleveleys, Fleetwood, M6 Forton Services, Heysham Power Station, Morecambe and the full expanse of Morecambe Bay round to Barrow-in-Furness on the horizon.
The return ride through the Trough of Bowland was a delight – see photo – not only to admire the wonderful Trough of Bowland scenery, but also the formidable A Team lead-out train for Liz F! Oh yes – we certainly took the Trough of Bowland by storm!
The company was excellent, and discussions were wide ranging covering Serena’s seismic outburst at
Flushing Meadow; the sexing of moths, butterflies, wasps and bees; La Vuelta; the Tour of Britain; 2019 World Cycling World Championship in Harrogate; and Maris’s earlier ‘protesting phase’ – we could all see the concrete evidence that her protests against the building of Heysham Nuclear Power Station had failed, but she seems to have had great success in stopping fracking on The Oval, Harrogate – at least for the time being!
Lunch stop at Beacon Fell Country Park was good, and the Slaidburn café was a delight both before and after the ride. So it was another great Awayday ride, and many thanks from all of the A Team to
Keith and Helen for their route, and to Trevor and Colin for their organisation: your efforts were much appreciated by us all. 42 miles and 4,300′ climbing. Eric W

I first cycled in the Forest of Bowland and Trough of Bowland over 20 years ago, in pre Wheel Easy days and my impression then was that it was too arduous. It’s amazing what over ten years with Wheel Easy can do because today I would describe it as wild and beautiful, with pleasingly challenging hills and we had the sort of glorious September day that you just did not want to end!
Kevin’s organisation was excellent, as usual, and he had already placed us into two groups, imaginatively called Group A and Group B. This can’t be a simple task and is no doubt fraught with all the complexities of doing the seating plan of a high profile society wedding. We suspect the way he does it is to undertake a detailed psycho-analysis of all the participants, then just randomly stick them into two equal groups. This works brilliantly and cuts out all that silly democracy and dithering at the start. Slaidburn is a good place to start as it had a nice cheap car park with toilets and a pleasant little cafe right next door. They had obligingly opened at 09.00 a.m. for our early arrivals and it was nice enough to sit outside.
We had been warned that the first ten miles were hilly (actually, so were the other 31) and within the first ten yards we were heading vertically upwards out of Slaidburn. We continued south in a similar vein to Easington and Cow Ark (only in Lancashire could you find somewhere called Cow Ark!) and after crossing the River Hodder we began to track west, up a few more hills, to Chipping. The views were stunning, the sun was shining and morale was high and our tummies were beginning to rumble. The lunchtime destination was the cafe in Beacon Fell Country Park but there were a few more short, sharp hills before we got our reward. The A Group had got there shortly before us so we just slotted in behind them in the queue and soon enjoyed a nice, not too expensive lunch. After lunch, we gave the A Team a bit of a head start, which gave us time to find Colin. He had disappeared and found a damsel in distress and we found him, patiently coaching her in the proper way to sharpen her scythe (see picture)! Bit of a risky chat up strategy that one!!
The sun continued to shine and we found more hills, soon heading north through Oakenclough and then skirted round the fells, enjoying a bit of respite from the hills, plus a view of Blackpool Tower and then Morecambe Bay (scene of a recent Wheel Easy Ladies’ tour). Then followed the best part of the ride, eastwards and gently upwards along open moorland and the breathtaking descent into the Trough of Bowland. We encountered very little traffic on the whole route but did stop and chat to a couple of young men who were out in a very nice MG car. It is the latest model and they were doing some promotional photographs. I did offer the services of our ladies to drape themselves over the bonnet to enhance their pictures but they just laughed nervously and changed the subject – rapidly. Anyway, we still took a picture and, if you want to know, the colour is “Hello Yellow”. “Custard” I call it. The only other traffic about was a small tsunami of sheep and the odd tractor and trailer which, on the very narrow roads, did cause us to breathe in sharply on occasions.
Once back in Slaidburn we all felt distinctly depleted on the calorie front, so nipped back into the cafe for afternoon tea and cakes – disgraceful, and one of our leaders had TWO cakes but he had designed a rather good route. We all agreed the Away Day had been yet another triumph with the customary fine weather and good company, namely Kevin, Colin, Malcolm, Gia, Charlie, Sarah R, James, Sue C, Keith and Me. Bring on the next one! Helen T 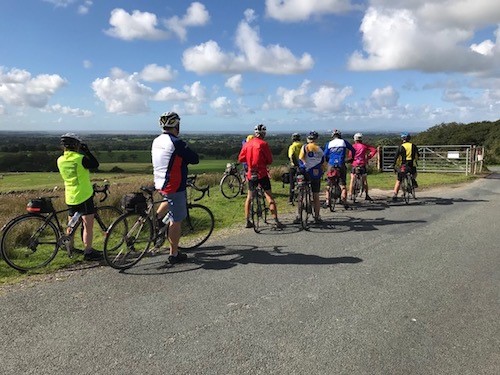 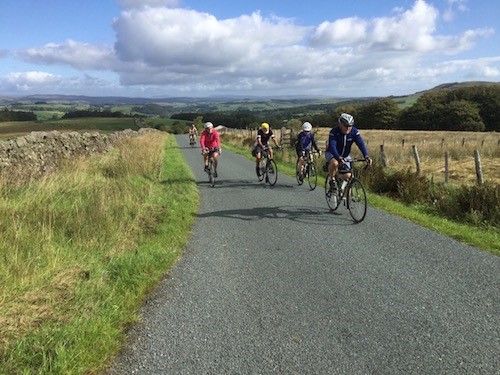 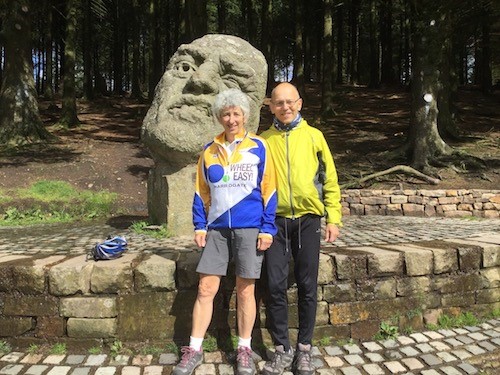 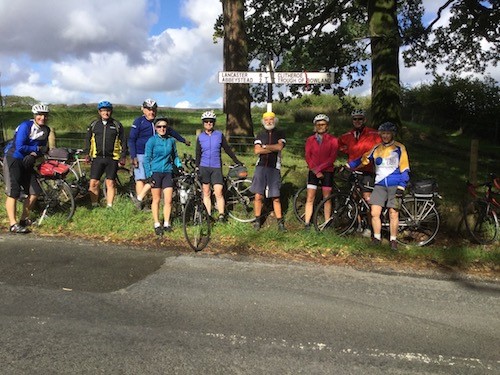 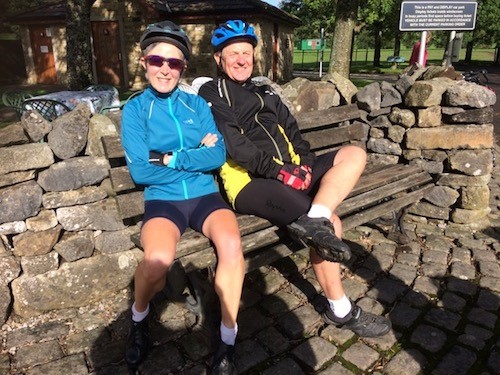 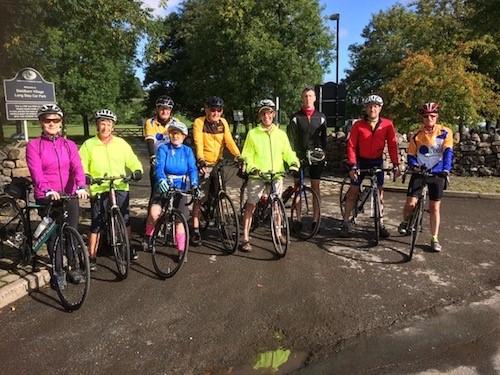 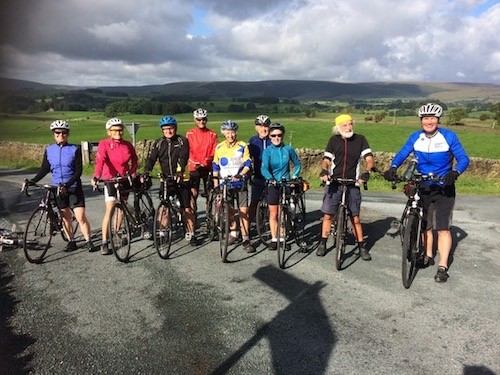 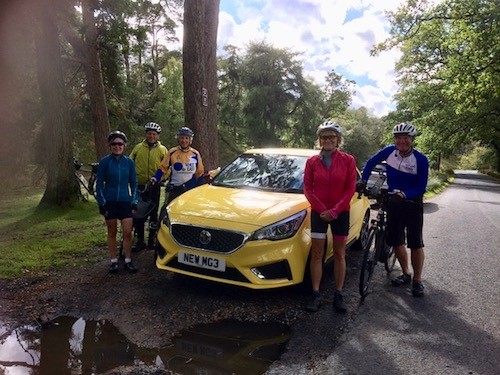 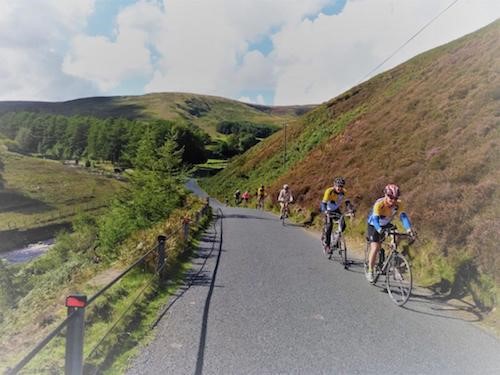 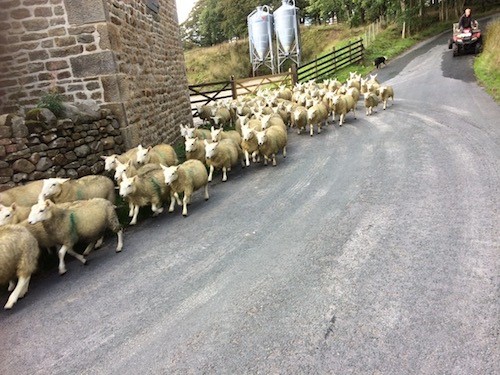