Nine riders today for the short ride. We welcomed back Tall John from his extended stay in New Zealand. An easy paced ride along the Greenway to Ripley and across to Knaresborough via Brearton, Scotton and Scriven to finish along Abbey Road to Waterside. Around 20 miles. Dennis B.

Thirteen of us split in to two groups meeting up along the way to clarify the route which was a shortened version of the advertised ride. The day turned out to be much better than forecast and the ride out to Bramham, the best part of the ride. Paul and Martin left us there for coffee in Wetherby, Mike left to go on holiday and the remaining 10 guided by James took a quiet route in to Tadcaster. Here the ever-efficient Lemon Tree staff cleared space for us and after a good break set off for home after Charlie had communed with Helen and Yvonne who had just completed the Tadcaster 10 mile race. Route back, Wighill, Cowthorpe, Little Ribston and to give James and Nick company included Knaresborough. A good ride, weather pretty good, warm and sunny, some strong winds but mostly at our side and 44 miles in good company. Gia 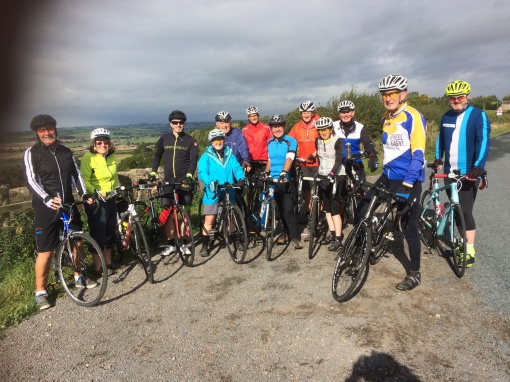 Despite a rather dodgy forecast, we were treated with yet another sunny cycling day, but the wind could have done with being turned down a notch or two. Ten set off for Cawood and we said an early farewell to John H, who left us part way round, leaving the rest of the group to head on east. We ditched Mrs B’s in favour of an al fresco, scenic, waterside lunch at Naburn Marina which was a new venue for most of the group. Dave S ordered the default biking fare which arrived in a curious stacked fashion. Oh, how to serve baked beans, let me count the ways…. After a couple of less than perfect navigation incidents on my behalf and making route deviations on the hoof (or should that be on the wheel) we arrived back in town with the usual showground hill sting in the tail. 60 very enjoyable miles with Janet, Justin, Dennis, John, Debbie, Mark, Dave, Debbie, Katharine and Peter. Thanks everyone, it’s been a great day. Helen B 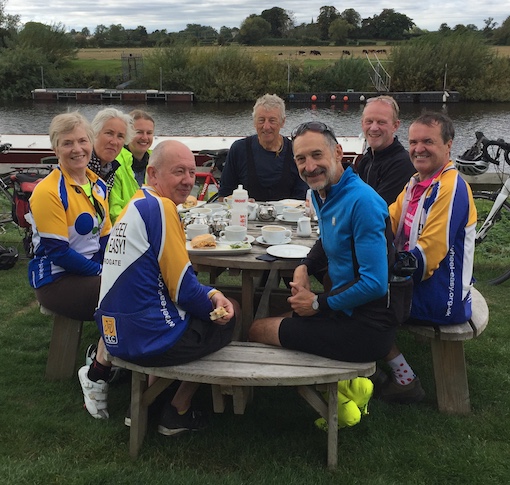 With the weather not knowing what to do six of us set off on five bikes, bob and partner on their bright green tandem for a day out in the flat lands we breezed through Kirby Overblow, no cheery wave from Eddie Gray like last time. We passed the old Scott’s Arms in Sicklinghall and on to Linton and Collingham…I still can’t believe the old star there is now a Tesco’s. Then up Jewett lane and it’s two cheeky hills and heading crossing Bramham Park with the Grade 1 listed 18th century house and its grounds now restored to their glory after the Leeds fest we reached the village and up the back way on to the Taddy road all the time getting a nice push along from the stiff breeze, I that is bound change.

We hung a right on to Garnet Lane and into Sutton on the strangely named Weedling Ln to avoid Tadcaster we reached Ulleskelf with its population of under a 1000 (the Kelf bit means calf in Icelandic) and an episode of Frost was filmed there 10 yrs. ago. leaving the village on Boggart Ln the wind started to become a factor as it cut across the wide open flat countryside we eventually reached Cawood which was badly affected by flooding last winter although there were no water-skiers on the river today. Grumbling tummies were telling us a cafe stop was going to be needed but as we reached the Solar way at Riccall it was apparent that we would have to wait a bit longer!……….somewhat limited options around these parts, there was a small refreshment place on the Old railway path but the loud running generator was not appealing.

On Bob’s suggestion we all decided that the cafe at Copmanthorpe was a good move sadly it was closed, but lady luck was on our side as a band of enterprising local people had hired the village hall around the corner and started up a Sunday cafe called Piece of Cake so we stopped there and were treated to fresh bacon butties and coffee and cakes.  Fully restored we all set of for home via Askham and Tockwith and an ever increasing battle with the wind tired legs were having to dig deep. The group split at Little Ribston with the tandem crew heading for Knaresborough and the rest for Harrogate via Spofforth.

A great ride guys enjoyed it

As always no mamil’s were harmed in this production..no photo either sorry!

With no published route for the Long Ride today, three takers left Hornbeam with only a vague inkling of what the day might bring.  However, one thing was clear – having spent three days climbing in the Peak District last week none of three riders fancied anything hilly.  So, despite the forecast wind direction (SW) our destination was the Vale of York, specifically Easingwold, for a cuppa and a think.  Having heard bad news about Bond End we skirted round it via Low Bridge and Abbey Road, waving a cheery hello to Bill and Norman who were waiting for company at Low Bridge.  With a tail wind, progress out through Farnham, Arkendale and Gt Ouseburn was swift.  Unfortunately, in Ouseburn Richard L did battle with a bee which got itself caught in his buff and tried to sting its way out, leaving Richard with a stung cheek.  Luckily (for Richard but not the bee, sadly) the barb and venom sack were easily removed without undue discomfort for Richard.  Over Aldwark Bridge, the river seemed to be moving pretty quickly – enough to keep the Scouts at the activity centre off the water, it seemed.  In Easingwold, the Curious Table was crammed with cyclists so TeaHee became the cuppa venue.  So relaxed were we that an hour passed in conversation ranging from ways to increase credit card security, Santander’s lack of security and care, reflections on the Peaks Tour and the way back home.  We agreed that a trek south towards York would give the opportunity for a side wind back to HG rather than a block headwind via Boroughbridge.  Taking turns on the front into the wind to York proved very effective in getting us to Clifton Moor in rather good time, whereupon the navigation got a bit erratic.  Eventually we got to Clifton Green and the river path, crossing to take the west bank past Rowntree Park and Knavesmire, enjoying the shelter.  With HMP Askham Richard in mind for a second stop, we battled the head wind to arrive at the cafe two minutes before the scheduled 2:30 closing time (note this for Sundays). Obliging as ever we were served our tea and cake before subtle hints were dropped that it was time to go.  Turns on the front took us quickly through Marston Moor and Cowthorpe to the Kboro to Wetherby road and Richard’s farewell leaving Peter J and myself to benefit from the three-quarter wind up to Abbey Road.  Negotiating the strolling pedestrians along Waterside gave a chance to linger and see just how nice the weather was turning out to be. As last week, the late afternoon and early evenings provided the warmth and sun to light up landscape and townscape and give an uplift to a 65 mile plus ride that was rain-free.  Highly enjoyable – in the end!  Terry S 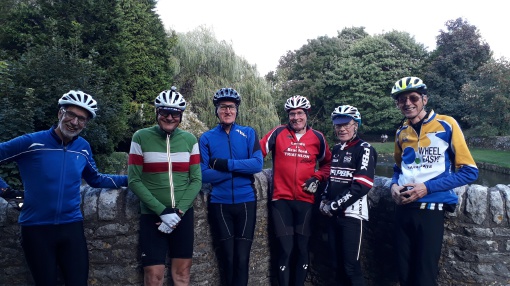 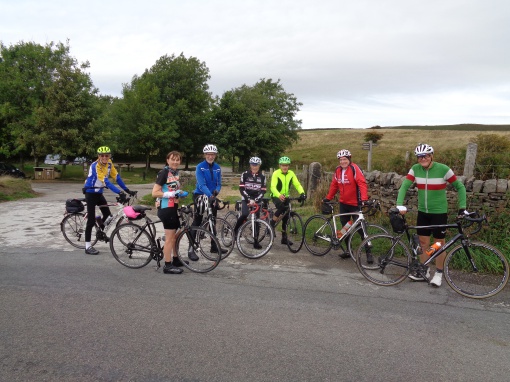 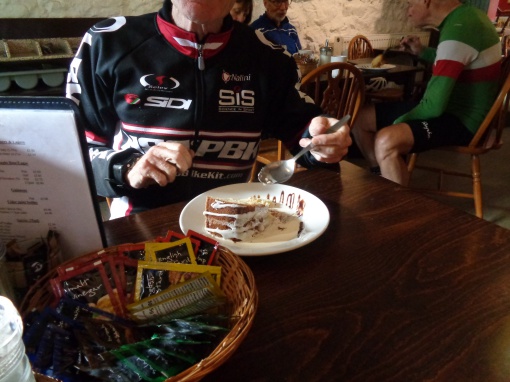 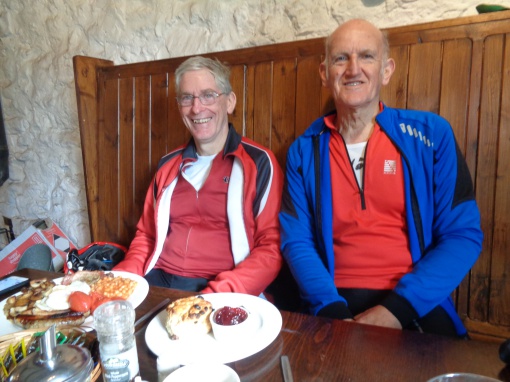 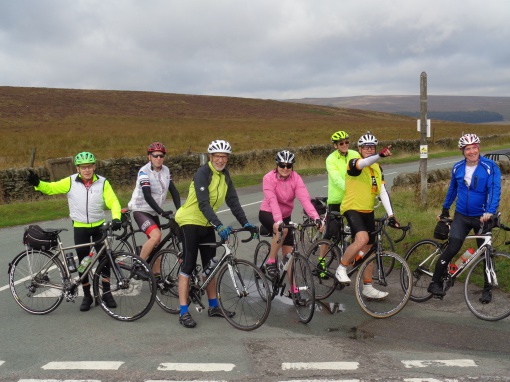 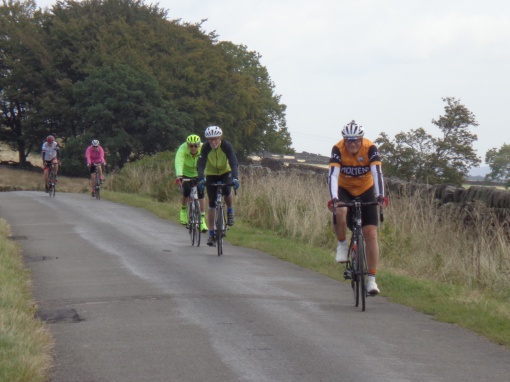 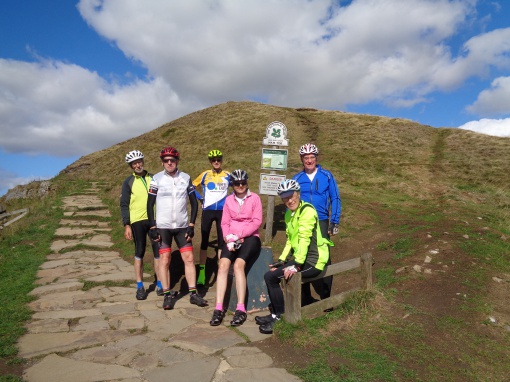 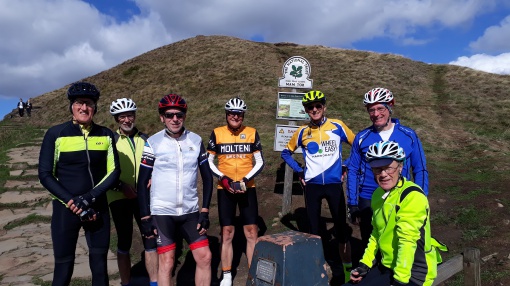 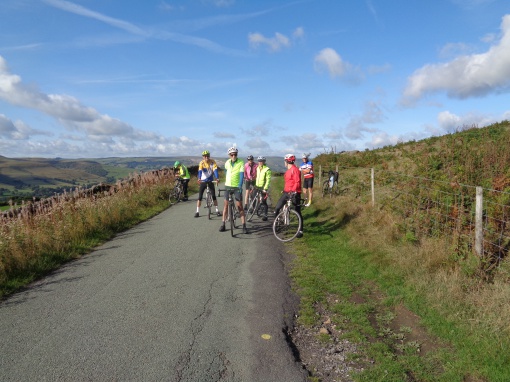 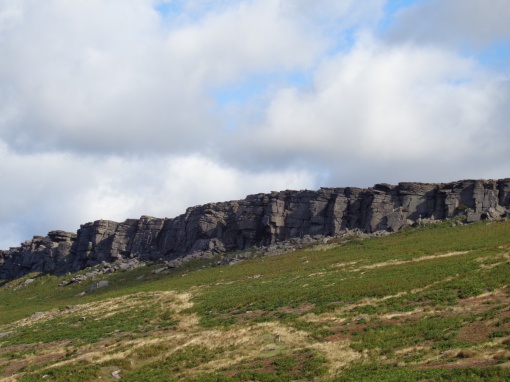