There was a large turnout at Hornbeam on an overcast, coolish day, with moderate winds from the south-west. A surprisingly large number of people (at least 25, I reckon) opted for the short ride to Scotton. Caroline G kindly agreed to lead a sub-group, which included Helen, new to Wheel Easy. Paul B agreed to back mark Geraldine’s and my group of about 12, which included several of the usual suspects and some relative newcomers. Through town past the cinema and on to the ASDA cycle path, then right along Bilton Lane and down into Knaresborough along the Beryl Burton. Waterside and Abbey Road took us towards Scriven, past the newly-opened Lidl.  Group photo at Old Scriven, with discussions on the meaning and etymology of the word ‘sepulchre’ (thanks to Paul B). We went through Lingerfield towards Scotton, but Dennis and Paul B were missing. Following a brief regrouping, Max and I retraced our steps (wheel marks?) to look for them, but we encountered them coming towards us shortly after setting off back. Dennis had had a problem with his mudguard, but nothing serious. On to the Guy Fawkes Arms, where we stopped briefly to sing the praises of the pub, and then towards Brearton and Nidd, where we turned right to join the A61 to Ripley. Dennis, Geraldine and I needed to be back by noon, but the rest of the group stopped at the café for refreshments.  About 20 miles. Joe 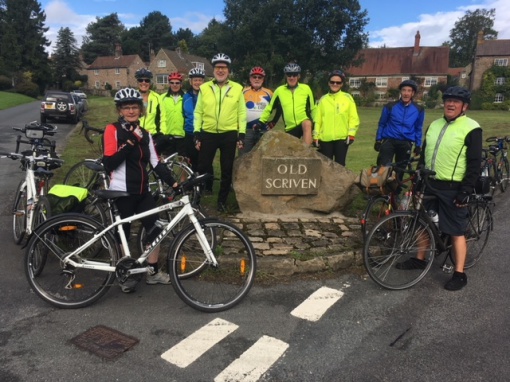 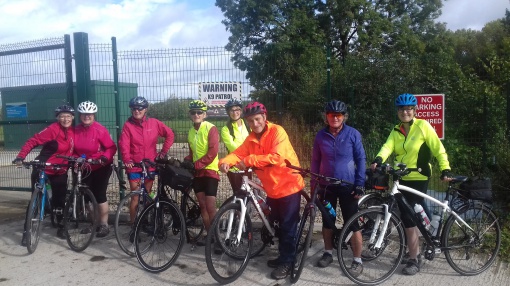 As it was suggested we hadn’t been to Toft Gate Farm Cafe for a while and as I was in need of more hills after Monica’s hilly ride on Wednesday Gia and myself offered an extra ride to Greenhow. Nine of us headed down the Greenway and on to Birstwith, Darley, Thornthwaite, Padside and along Braithwaite Lane to Duck Street. It’s a lovely route along quiet hilly lanes. Toft Gate Farm Cafe was busy but we managed to get a table and were quickly served. Unfortunately, while in the cafe it started to rain. After refreshments, with the wind behind us, we continued down Peat Lane to Glasshouses and along the main road to the Toll Bridge and onto Birstwith and home. It was a great 40 mile route with stunning views and as always, good company. Paul T 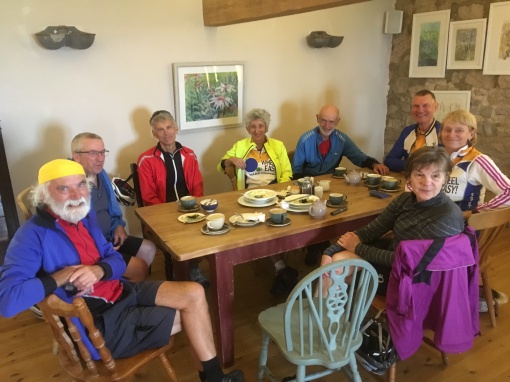 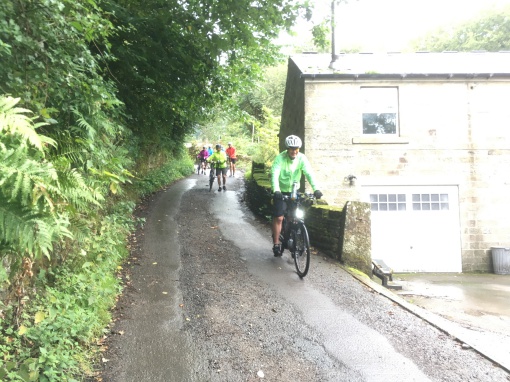 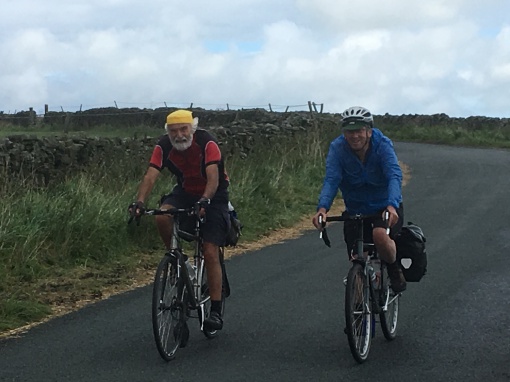 The weather forecast was for a damp start, but apart from a slight breeze it was a nice autumn morning. Riders gathered for the medium plus ride and it was decided to split into 2 groups, Helen suggested a ‘brisk’ riding group and off they went.  That left 5 others to set off, picking up 2 more at Low Bridge, 1 rider was coming with us to Great Ouseburn then going back via Boroughbridge. The breeze was kind and on our backs. After crossing Aldwark Bridge Justin had a puncture and a new tube was put in very quickly. Setting off again towards Alne and Easingwold stopping to decide if the coffee stop was at Easingwold or Coxwold and it was agreed on Coxwold. John left us here for his coffee and bacon sandwich in Easingwold and would make his own way back. At Coxwold we met up with the ‘brisk’ riders just as they and another cycle group were leaving, lots of room for us! After refuelling it was then into the head wind which seemed to be stronger now, out of Coxwold on to Hutton Sessey where the rain started, so waterproofs on, it stopped by the time we got to Boroughbridge but still a head wind back to Harrogate.  A nice steady ride with lots of chatting. 54 miles. Chris R. 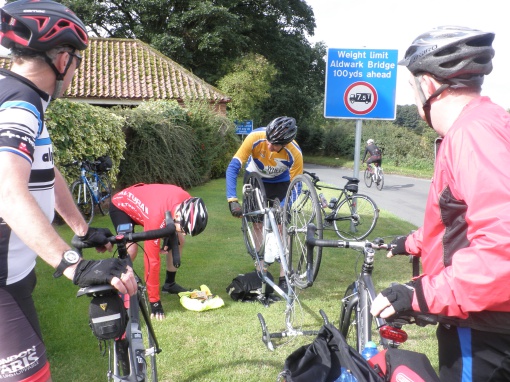 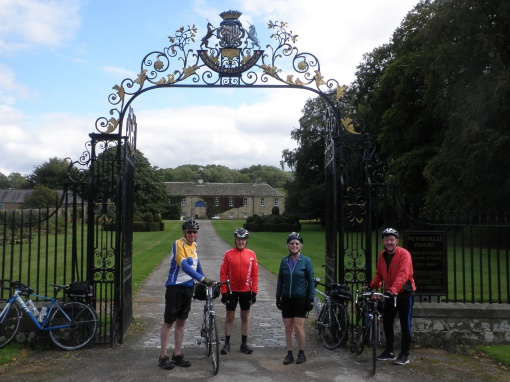 Nine riders formed a ‘break away’ from Chris Rodger’s group (due to pressure of numbers) heading towards Easingwold. We avoided Low Bridge and somehow got in front of the fast boys (plus Julie). Some of them passed us just before Tim took us down a ‘magical mystery’ lane, where we popped out just before Aldwark bridge. By this time the fast boys (and girl) had leap frogged us and were gone. We decided to bypass Easingwold and carry on to Coxwold. We thought that we were the only group with that idea – how wrong can you be as all three groups had decided to do the very same thing. To speed up the service (think we might still be there) we had lovely scones and toasted tea cakes with home-made strawberry jam – delicious. The owner was very pleasant and it was lovely sitting outside in the sunshine. I have to say that the return journey to Hornbeam was tough – due mainly to the wind which had ‘got up’ whilst we were in the cafe garden. In fact, Knaresborough Hill felt even more of a slog than it usually does. Despite that we had a great ride – 52 miles (sorry Tim – you were promised 58) at a respectable 14.7 average (it was 15.1 before k.. hill) with 2,500ish feet of climbing. Thanks to Helen, Debbie, Bob, Mark, Tim, Tim and Tim- please see photo of ‘The Tim’s’ for identification purposes. 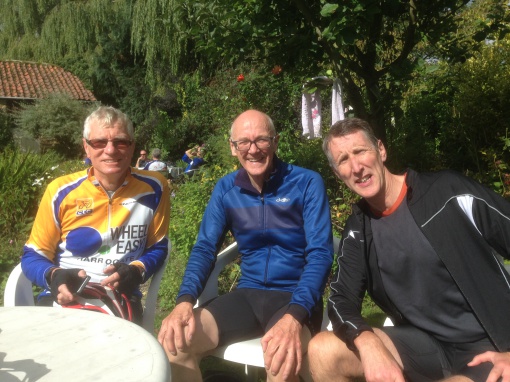 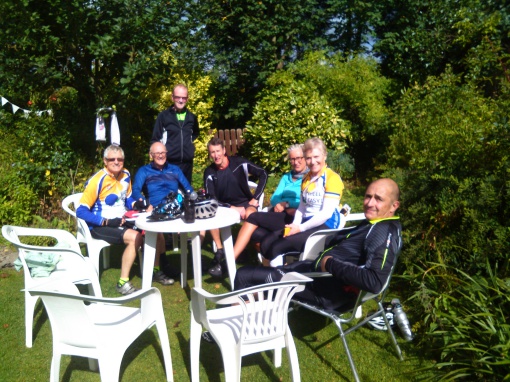 The 14 faster riders arrived at the Cafe stop in Coxwold after 30 uneventful miles along the prescribed route with a brisk tail-wind. Martyn was already there, having spent the morning trying to find us. We ordered a combination of the usual cyclists’ fare, with coffees and teas arriving after about 10 minutes and everything else in dribs and drabs over the next hour.! They asked if we would phone ahead in future so they could be better prepared.

We set off up the hill with cafe- legs and into the wind. It was a bit of a grind back to Boroughbridge where Martyn peeled off and Dave and Andy dropped back. We got a bit wet approaching Knaresborough but pressed on up the hill and back into Harrogate.

Lovely view of the White Horse as we approached Cotswold, tasty food but slow service. Thanks everyone for a good ride and good company. 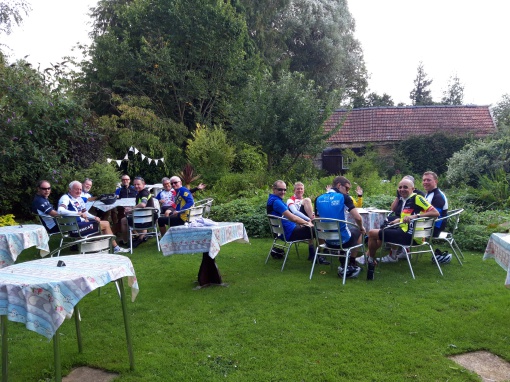 Four set off on the long ride today, and somewhat unusually four remained when we parted ways at Menwith Hill.  Having been warned of copious hedge trimmings on Walton Head Lane, we departed from the advertised route within 2 miles and headed for North Rigton and Huby.  That meant ascending Old Pool Bank to get back on course, always a bit of a leg warmer.  Then across the Chevin, back down to Otley and through to Cockpit Farm for refuelling.  The pit stop was hardly F1 speed, but entertaining as various views were aired on what different cyclists complain about.
Onwards along the Wharfe Valley a steady drizzle set in by Bolton Abbey, and we were happy to arrive at the tea room at Parceval Hall and take some shelter.  We hadn’t been there before, but it’s a pleasant spot and made a nice change from regular haunts.  (NB it closes on 30 Sept, reopening 1 Apr).  Suitably fortified, and having sorted out tennis and motor sport, we cruised up to Greenhow aided by a stiff SW wind.
We decided to stick to the usual Duck Street route back, once again ditching the original route, having had sufficient hills.
Thanks to Peter, Martin and Chris for an enjoyable 60ish miles. 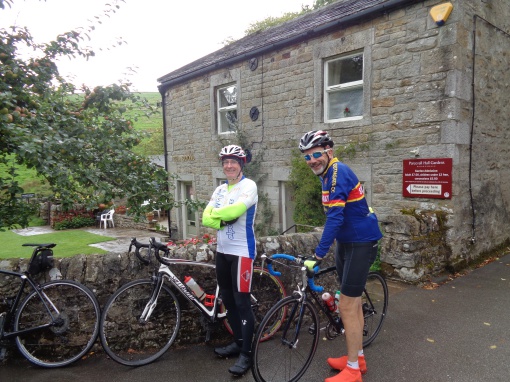 We finished the Bayway ride in style! Well done to Caroline, Jill, Sue, Jane, Monica and me (Jen). 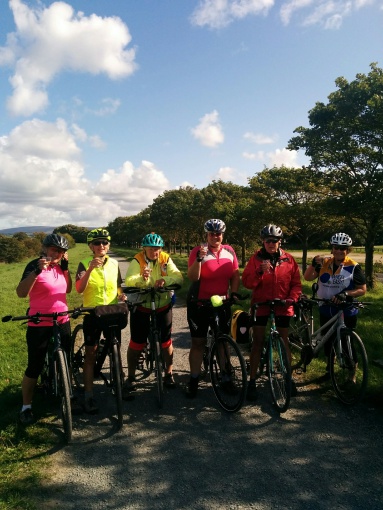