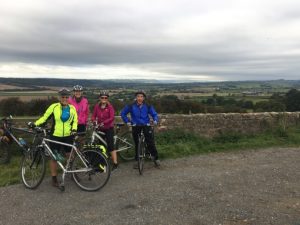 along the way.  Dennis lead the way through to Burnbridge, Kirkby Overblow, Sicklinghall and then on to Wetherby. John and Dennis returned home which left the 3 ladies (Karen, Liz and Rachel) to find the route Karen had cycled in her second week after joining wheel-easy.  The route took us through Thorp Arch village, Boston Spa on to Clifford and Bramham with only one wrong turn and a few stops to check progress on the trusty iPhone. A well-earned toasted fruit loaf plus coffee, tea and hot water were very welcome from the cafe on the shambles in Wetherby.

The route home took us along the Harland Way and then on to Follifoot, Rudding Park, picking up the permissive route through the show ground and back to Hornbeam Park. The wind was against us on the way home and typically blew stronger to test the weary cyclists.

Not sure how many miles but I am sure it must have been lots!!!

Thanks for the wonderful company, John for the photo of the Wharfe valley and Dennis for getting us all to Wetherby.  Karen

It all worked out very well. There were 7 in the “slightly faster group” and 9 in the group which I led with Monica as back marker. We weren’t far behind the others though and we did meet them briefly at the lunch stop in the park in Otley. 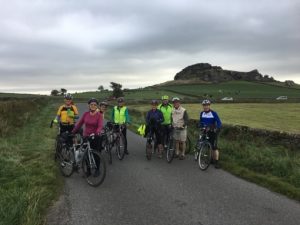 Almscliffe and all the way to Otley. There were some sneaky gusts blowing through gateways which tried to dislodge us from our bikes. The small spots of rain were not forecast and thank goodness they didn’t amount to much more than a few drops.

The route included Little Almscliffe, Timble, Askwith and back via Almscliffe Crag. There were some great downhills and one or 2 little ups – nothing we couldn’t manage.

We started with 9 and finished with 9. Is that a record? And we all enjoyed the ride.  Steve W

Masham was the destination and ten riders set off for the Greenway, Scarah 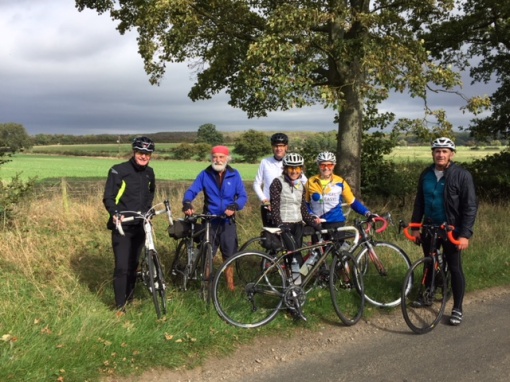 Bank, Watergate Lane and Fountains Abbey, including Bob who couldn’t decide which ride he was doing. Paul, John H and Martin peeled off, making their way to Oliver’s Pantry in Ripon. I hope that you three had a good ride. Turning left at Aldfield church we made our way towards Laverton and Kirby Malzeard. This is where the real climbing started and it was a shame that the views were a bit misty. There are a couple of sharp turns- first right then left and I have to admit I missed the sharp left and was heading down a track! Apologies to Jonathan who was quite close to me as I shouted ‘Stop’. I had a bit of a back wheel skid and Jonathan’s rear wheel locked up. However, no damage done. The same cannot be said for Bob who skidded on a damp patch of road at the same point and crashed, buckling his rear wheel and ripping his cycling top. Thankfully he was unharmed. We all regrouped and ‘swooped’ down to Masham, Colin guarding the massive pot hole in the road (thanks Colin) Lovely food at Johnny Bagdad’s and I remembered to pay this time-Yeah. Whilst discussing Bob’s incident someone mentioned that things happen in three’s – not a problem as Bob had also cracked his helmet! Not to worry as he’s going to the bike show so he can but new helmet, new cycling top, new bike?? We returned to Harrogate through West Tanfield, Ripon, Knaresborough and Hornbeam. It was a lovely ride, thank you Colin, Jonathan, Jill James, Alan and Bob for a great route! Oh – Jill and I had a race up Knaresborough Hill – Jill won. 52 miles at 12.5 mph with a fair bit of climbing. Janet G

This week, we had a plan: take the shelter of Nidderdale all the way up to How Stean and the Gorge cafe and then, if the conditions were right “hop” over to Masham and then back via a suitable well-worn route.  Seven set off, mingling with other groups on the way until we headed away to Beckwithshaw and Hampsthwaite.  Even as early in the ride as Birstwith, we began to wonder when the forecast  fine weather was going to arrive.  It felt rather chilly in the valley especially on the descents with a hint of dampness.  Darley man Andy directed us to the Thornthwaite road where the chevron climb up to Padside brought cries of anguish along the lines of “I’d forgotten about this one!”  Emerging into the strong westerly wind over Heyshaw Moor we could feel some distinct signs of drizzle.  We were passed at the top of the Thornthwaite climb by a 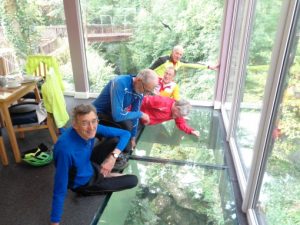 rider going at a great rate of knots.  We met him again coming towards us at Dike Lane.  Stopping for a brief chat, it emerged that he had gone down Yorke’s Folly and come back up again all within about 10 minutes.  We guessed he was training for something. Feeling chilly and slapped by the now-hefty side winds into Bewerley we made an unscheduled cafe stop at Teacups, admiring the new phone mast in the car park and the still-present marquees on the showground, left over from Monday’s show.  Martin departed for home after elevenses while the rest of us headed swiftly up to Lofthouse where two of the group had already cast their lunch venue vote by continuing direct to How Stean. Here the group refuelled well amid typical discussions for folk of our age: how to keep blood glucose under control; why does the NHS get the drugs the companies want us to have, while others in need don’t get promoted.  Lunch was rounded off with our attempt to photo the group hanging over the Gorge below the tearoom.  It really needed someone to go below but that will have to wait.  Back to the Lofthouse junction where glances up the valley towards Scar House pointed to low cloud and rain, whereupon our two climbing whippets opted for home rather than Trapping Hill.  Down to four, we headed slowly up the big hill as the cloud got lower and the air damper;  no views from the top, no surprise.   All safely over the top it was downhill (mostly) towards Masham, stopping to photo the sight of the bare banks of Leighton Reservoir; a bit of a shock.  Taking a right turn at Fearby Cross tow 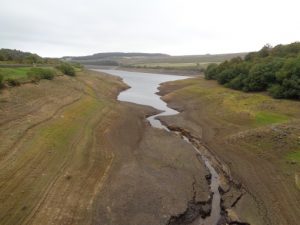 ards Swinton Park, pausing briefly to admire the grand entrance to the spa complex and speculate on the clientele it would need to keep going, Masham was by-passed.  The question then was whether we wanted or could justify a third stop, in Ripon.  Still on the chilly side, the matter was quickly settled once we’d got to Ripon – supporting our favourite cafe is a matter of duty and so Spa Gardens it was for a closing-time cuppa. With Peter R leaving early for an evening appointment, just three of the original seven took the lowland option to Knaresborough and home.  It was only then that the weather remembered the forecast and began to turn on some sun and gives us a bit of warmth.  We seemed to have dragged our own personal dark cloud bank around with us all day, made all the more galling by clearly defined sharp edges to clouds away to both east and west, beyond which were blue skies and sun.  Then it dawned on me – we’d started in the wrong place. Easingwold was the place to start today.  Nevertheless, we arrived back in HG in good spirits with 65 miles and over 4500 ft in the legs and lungs, plus renewed acquaintance with Thornthwaite’s and Trapping Hill’s gradients. Terry S

Eleven EGs started from Low Bridge and split in to the fairly traditional two groups, heading for Spa Gardens at Ripon, via Bishop Monkton.  An extra EG joined them there.  The usual discussion before inertia set in resulted in the decision for the ‘A’ Team to aim for Thorp Perrow Arboretum.  The mainly northerly trajectory was an attempt to counter the stiff westerly breeze chilling our left cheeks.  Swiftly swung through and waved goodbye were Hutton Conyers, Wath, Kirklington, and Carthorpe.  The next section turned straight in to that breeze and Tollerton Tim (Roubaix) took a strong turn on the front which burnt off two of the seven riders in our group. Back together for Snape we managed t 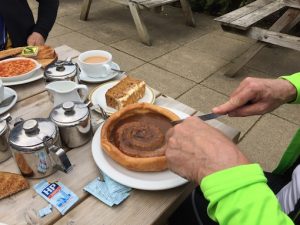 o stay more or less together to the Arboretum.  Lunch was taken outside and did include some ‘Beans on Brown’.  Unfortunately the breeze cooled the toast off quickly, before we could apply the beans.  This, and the bread itself, resulted in a beans score of initially 3.5 but dropping to only 2, upon reflection.  Whereas Marvin declared his Cumberland Sausage and Yorkshire Pudding (in Gravy) almost as delicious as the Menu implied.  A kindly stranger with a cracking Springer Spaniel obliged with the Team Photo.

The return journey started with another tussle with the blinking breeze to Masham, then some respite from that but the gruel that is the climb towards Grewelthorpe.  Colin and Chris soon zoomed upwards and out of sight of many.  Allegedly, Chris ‘Beanie’ (Omega Pharma Lotto Quickstep) took the intermediary imaginary line at Nut 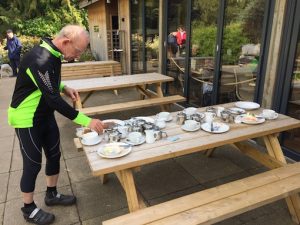 with Common, and Colin was King of the Mountains at Hill Top, Hackfall (576 feet).  Once again, the two of us slacking slightly at sixth and seventh wheel, were considering whether to be known as the ‘A – Minus’.  Your new reporter also missed the sprint for the Ripon sign being won by Chris ‘Beanie’.  In Ripon, Colin and Eric ‘Chatterbox’ (Garmin) opted for more hills in the direction of Fountains (‘A – Plus’?).  The five remainers began to take a more leisurely approach to the last quarter of the ride.  Graham diverted off at Bishop Monkton for more caffeine and excellent carrot cake at Boroughbridge (Bowe Deli).  Dave ‘RadioShack’ S, Chris ‘Beanie’, Tollerton Tim and Marvin heading back to Knaresborough.