Short Ride Report – It was a good turnout for quite a chilly day and so nine of us set off up past Ashville and the Squinting cat heading for Beckwithshaw and Little Almscliffe Crag. The wind over the moors was quite chill and we were pleased to turn away from the wind direction by crossing the A59 and dropping down 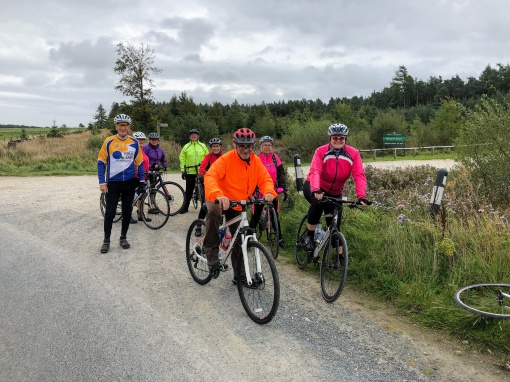 to Kettlesing. As Jean pointed out even before I announced it she knew we were heading for Sophie’s because apparently every time I lead a Short Ride we end up there. So, we swooped down to Hampsthwaite and Sophie’s only to find Paul T had beaten us to it. Paul is another Sophie’s aficionado all based around his love of their excellent flat whites. The majority of us then returned to Harrogate via Hollybank Woods, Ripley and the Greenway. 25 rather cool but dry miles and some sunshine peeping through to finish which showed off Jill’s sparkly bike beautifully! Martin W.
Medium Ride
Much cooler today, cloudy and a bit chilly, but moderate winds and no rain forecast. 11 takers for the medium ride. It would have been 12 at Hornbeam, but Dave had a broken spoke, and had gone home to fix it, intending to meet us at Ripley (rather impressive, I thought.) We went through 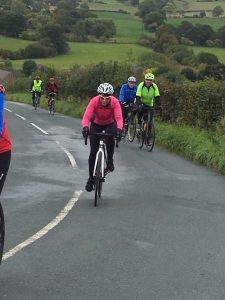 town and along the ASDA cycle path, over Dragon Bridge and along the Greenway, but before we reached Bilton Lane Richard had had two punctures (one front, one rear) and Brian one. Richard called it a day and went home, whilst Brian fixed his rear-wheel puncture. On to Ripley, where Dave was indeed waiting for us, making 11 again. He had (wisely) changed bikes rather than attempt to fix the broken spoke in record time. On through Hollybank Woods and then right up Clint Bank and across the Pateley Bridge Road and down into Shaw Mills, followed by the inevitable steep up to Cut Throat Lane. Group photo, kindly taken by Tim, and then through Bishop Thornton and left towards Fountains and then right down Watergate Road. Brief re-grouping by How Hill chapel, and then to the visitor centre at Fountains for coffee (free for cyclists if you bought a snack at the same time.) Down the Deer Park and into Ripon, Littlethorpe and Bishop Monkton. Most of us turned right towards the Mountgarret estate, but, having crossed the bridge/ford at the old lime kilns, the two Chris’s and Dave were missing. Tim kindly rode back and up the gravelly bit, but could find no sign of anyone, so we concluded they had not turned right but had gone on to Knaresborough (I hope we were right). Brian and Al were keen to get home, so they pressed on separately from the rest of the group, meaning that there were just six of us by the time we reached Ripley via Nidd. Back along the Greenway. Joe

There were again plenty of takers for this ride, perhaps due its billing of “gentle”.
The groups were slimmed down a bit and I set off with a little band of around a dozen riders.
Our gentle pace meant that some riders with more Summery attire were feeling the cold but a quick sprint up Farnham Hill seemed to rectify matters, and we rode on easily through Ouseburn and over the new speed bumps on Aldwark Bridge.
Jill punctured at Tollerton crossroads, but it was soon dealt with.
Everyone seemed to be in deep conversation with their neighbour as we continued, which is how club riding should be done, and Easingwold was reached in no time.
The Coxwold Café had been pre-warned of our intention to visit and we had a very pleasant stop, eating great wedges of toast in the garden. The weather obliged with a quick shower as we paid our bills, and we were soon on our way again.
A bit of over eager riding at the front up to Boroughbridge meant that our group became a bit spread out, but order was restored until Occaney, when we realized that the supposed comfort stop by Mark was taking rather a long time. Turned out it was a puncture stop.
Fortunately, I was able to pull the group back together and we completed a very pleasant ride back to Harrogate for about 3-00pm.
Thanks to Zoe, Julie (who disappeared off our radar), Jill, Janet, Mike, Martin, Mark, Maris, Helen, Dennis, and Debbie (who turned back for home at Tollerton) for another lovey day out.
DaveS.

The medium plus group set off as a single large group until just after Knaresborough when Mark T, Pete, Paul B and Julie broke away at a slightly faster pace. The group decided against a coffee stop in Easingwold (too soon) and Coxwold (too slow) and continued to Spilman’s farm shop at Sessay which has an excellent cafe if you can cope with the arctic conditions inside. Luckily there were cosy blankets draped over the seats which Julie, already feeling under- dressed in shorts and slightly hypothermic, took advantage of.
Post cafe, the group set off into a sharp head-wind, all the way to Boroughbridge where Pete continued on the prescribed route and Mark and the others put in a diversion to Markington via Bishop Monkton to avoid Knaresborough Hill. (!??) From the Drovers we enjoyed the descent to Ripley and a gentle approach into Harrogate along the Greenway.
Time to put the shorts away and get out the winter gloves!
63 miles, 14.9 mph, 2300 feet ascent. Julie E

Just 3 riders (Phil, Tim and Eric) set off on today’s long ride – what has happened to the long ride over the past 2 years? We were due to pick up a fourth member (Peter R) on the outskirts of Knaresborough, but the rendezvous didn’t go quite as planned, and as I as was telephoning Peter, we were overtaken by the Medium Plus Ride fast boys on their way
to Easingwold and Coxwold, or so we thought. Eventually Peter joined us and we were on our way to Boroughbridge, Sessay, and Kilburn where Phil left us – his left knee grateful for missing the climb of White Horse Bank. A few minutes later the three of us were on the climb. I was a little sceptical of the ride route saying the climb is 25% gradient, so paid more attention to my Garmin than usual. For much of the climb the tree canopy prevents Garmin getting any satellite reception (which is demoralising when you are straining at the limit to be told you are at 0.0mph and on a 0% gradient!), but on the rare occasions when the sky was visible overhead I checked the gradient and did see 24%, so I totally withdraw my scepticism. The 12 minutes of exertion on the climb are always worthwhile for the visit to the Yorkshire Gliding Club at the summit. For those who haven’t been there, this is an iconic café amongst cyclists: good food, good prices, very cheerful service, and the best view from any face in North Yorkshire with the wide expanse of the Vale of York and the Dales laid out in front of you. What a panorama! As usual there were other bikes parked outside the clubhouse, but the surprise was that these all belonged to the Medium Plus Ride fast boys, who preferring our route had morphed into the Long Ride fast boys! The highlight of the return was the adrenalin rush of the descent of Sutton Bank, followed by the more sedate route via Topcliffe, to Boroughbridge, where we found three cafés closed before finally finding Gilchrest’s open, and very pleasant it was too. Last week Tim completed his first 60 mile ride; today on his first long ride, he notched up 65 miles and 3,700′ climbing. Well done Tim! Eric W.

10 Wanderers in Wales for 2 days cycling and 1 day mountaineering up Tryfan. First day set off to do some of the Brailsford Way. A very steep climb directly up out of Llanberis brought us out on a high ridge overlooking the sea and Anglesey. The sun was shining and the views were spectacular out to the coast. Keith’s chain snapped, lucky the three wise men had a ‘magic link’ to fix it. Dropping down into Caernarvon the wind began to pick up and the group headed along the coast towards Dinas Dinlle for lunch. The seaside village was deserted, we had a quick look at the beach, it was decided too cold to swim or paddle. The view of the Lleyn Peninsula were spectacular. After lunch the wind was really gusting and the group decided to ride back to Llanberis alongside the Welsh Highland railway track. A good ride of 40 miles and some of the Brailsford Way completed.
Second day Andrew led a ride following the Brailsford Way to Beddgelert, up over Pen Y Pass and down back to Llanberis. The first part of the route followed yesterday’s and then along to Beddgelert where we had an early lunch in an excellent café. The group set off up the steep winding road up the Pen Y Pass. The drizzle started and as we climbed higher the mist came down and views were in between cloud breaks. It was still a lovely cycle up despite the weather. Tim in front, stopped to ask a chap to take a photo of himself in one of the spots where he had a view, and was photo bombed by Maggie and Liz. The cloud came down and it was a case of keeping two or three close together with lights and Hi Vis to help make us visible in the mist from the cars going by on the winding bends. Though there was little visibility you could see over the edge of the road the steep drops below, with not much edging, but we all reached the top safely. Richard made sure we all went to look at the 3D map so we could see where we had climbed up from. A stop at the top in the warm YHA for hot drinks and cake were very welcome. Back on the bikes for a fantastic sweeping ride down Pen Y Pass, the sun came out and the views were spectacular a great end to the days ride of 30 miles and 2400 feet of climbing.
Third Day Charlie, Maggie, Liz F, Pete, Tim, Helen and Keith went to climb Tryfan, Andrew went up Snowdon via the train to the summit. Liz and Richard went windsurfing at the new Lake centre and cycled up the Conwy Valley. The weather was brilliant, sunny and warm with fantastic views of the mountains. The scramble up Tryfan was a challenge, scrambling over large rock boulders and traversing across narrow ridges. On reaching the Heather Terrace it was a rocky scramble up to the col before we tackled the climb to the summit. A herd of very large wild goats blocked our climb to the col, as we nervously edged our way round them. They were magnificent with very large horns!! On the summit, Tim was debating if he could jump from the Adam to the Eve rock but decided he had tested his nerve coming up and needed his lunch. A picnic on the summit was the best place to be in the world with the sun shining at that time. Reluctantly we turned to descend to the col and down to the lake below where we stopped for a drink, Liz and Pete had a paddle.
A fantastic short break and well recommended area to visit with plenty of cycling routes and climbs up challenging mountains or easier walking trails, plenty of activities for all abilities to do. Liz F.