Eight regulars for the short ride today. Nice to see John and Judith back again. Judith showing off (her words) on her new e-bike. We took the route as advertised and at Farnham Paul and myself with things to do headed back to Knaresborough leaving Caroline to take the remaining six to Ripley for a cafe stop.  Distance of about 20 miles. Jean

We (Caroline’s group) went back via Farnham where Dennis left at Lingerfield, Scotton to Ripley where we had scones, coffees and a lemon and honey.  Did a total of 27 miles.  Enjoy your entertaining. Caroline. 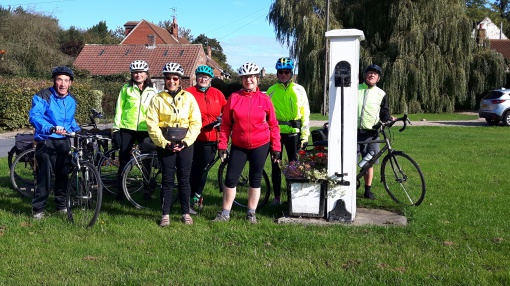 The weather forecast for Sunday had been grim earlier in the week. So, it was a real surprise when it turned out to be a wonderful Autumn day- perfect for a tour of the Vale of York. 18 of us met at Hornbeam. We decided to make a quick exit and meet up at Low Bridge. Here, we found 2 ‘old members’, Allison and Gordon, waiting for us. A group of 9 faster riders were happy to go to Boroughbridge at their own speed. The rest of us ambled along at a comfortable pace. At Burton Leonard, Allison and Gordon decided to make their way back. Dave P and Max had not made the ‘rendezvous’ either. Once we reached Boroughbridge, there was Dave sitting comfortably outside the café. He explained that Max was fine and also making his way back. [It’s a good idea for the back marker and leader to exchange numbers- we have now!] The speedy 9 were also basking in the sunshine, but soon set off again. We enjoyed a wide-ranging conversation, bee- keeping, G.M. foods, selective breeding and much more. You learn such a lot at a café stop! The second half of the ride was just as enjoyable. We ‘dropped’ even more people- Peter turned to return to Tockwith at Great Ouseburn, Dave P left us on the edge of Knaresborough and then Colin. By the time we got to Harrogate Golf Course, there were just 5! A great route for Autumn with the usual cheery company. Many thanks to Dave P for ‘sweeping up’ at the back. Alison N 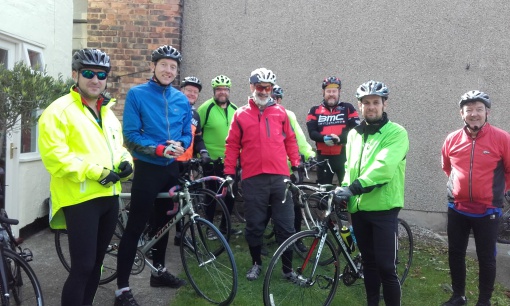 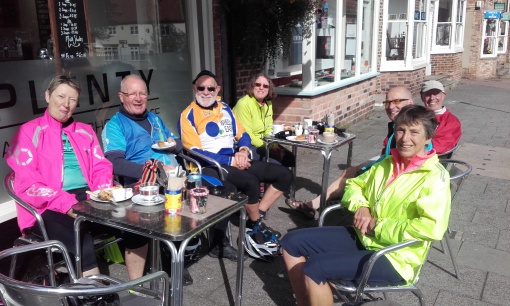 As often nowadays, the M+ Ride split asunder even before leaving the car park.   We saw the fast group later in the cafe at Grassington, but of the Gia Rescue group we never saw a sign – perhaps the puncture proved troublesome.

The Middle group – hereinafter called M+M, was thus 8 riders, including Tim who had ‘never ridden 60 miles before’ – well he has now, and some.   The Ride Description gave the Leader (who had not read it thoroughly anyway), discretion on the actual route to follow, so we went via Little Almscliffe and Swinsty Reservoir to cross the A59 near the Farm Shop and head along Meagill Lane to join Greenhow Hill Road before the Menwith Hill Road junction and thence up to Duck Street.   Most of this journey was thus into a 100% headwind – not unusual along here though.  Having re-assembled under the glare of the house-owner (Dave tried a cheery ‘good Morning’ – no response), we turned left towards Stump Cross, Hebden and then Grassington for the Cobblestones Cafe.  The service was a little chaotic – but then I wouldn’t want to do it either, but the food is always good.

On leaving Grassington to head for Burnsall, we were pleased that the road was CLOSED to traffic all the way to the Devonshire Arms. It made a more pleasant trundle in the sunshine with the wind now behind us. We crossed the bridge at Burnsall for Appletreewick where we lost Tim briefly and then to the Cavendish Pavilion, Bolton Abbey, Beamsley, Ilkley, Otley.  My revolting followers had declined the offer of a short cut via Farnley and Brackenthwaite so after Phil had left at Askwith, we headed along the new cycle short cut to Pool where Dave and Janet departed to Leeds and 5 of us home via Castley.  Stephen had a puncture while standing still and eventually the clouds caught us again near Kirby Overblow.  Mike, Helen and Tim disappeared in front while Stephen and I sheltered from the worst and then home via the shortest route – up Almsford Bank.

Apart from the last few miles in the rain, it was a great ride in good weather.  Thank you, team, for being led. My Strava showed 64 miles and 4,400′ climbing – well done all. Peter L 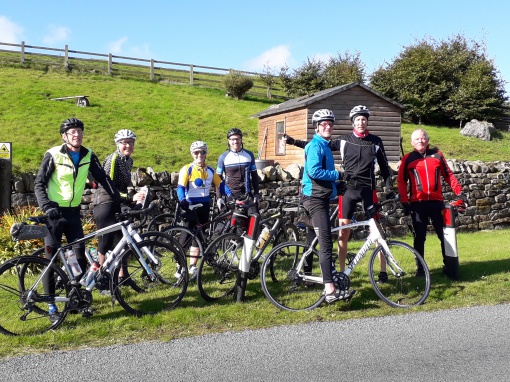 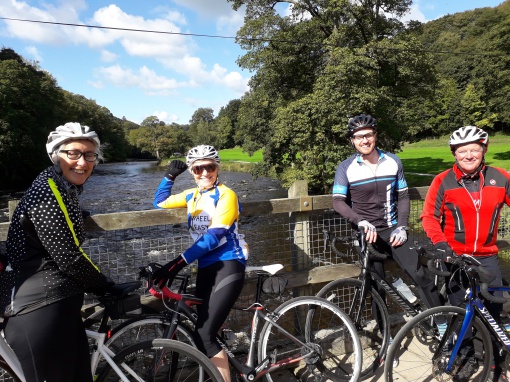 Those Medium Plusers looking for an early bath today, forsook Peter’s trip to Grassington and opted for something shorter, but still quite hilly. Thus Paul, Jill, Colin, Kevin and myself left Hornbeam to collect Gia who was repairing a puncture and although a bit on the thin side the sun came out and it was dry! We made our way to Menwith and then started on Duck Street against a troublesome wind. At the Stonehouse Inn Paul and Gia decided they needed to head for the early bath and the remainder made relatively slow but steady progress against the wind to Greenhow and Toft Gate Barn for a well-earned coffee and in some cases bacon sandwich and cake break. After admiring the long-distance views from the farmyard we returned down Duck Street in somewhat quicker time the we came up and branched of for Thornthwaite where we came across Richard and Lesley heading for Pateley.  Having passed the time of day with them we headed down the dale through Darley Birstwith and back into Harrogate on a quite busy Greenway. I got home with almost 50 miles on the clock, although that included a few extra ones from Knaresborough and my legs told me we had done a bit of climbing. A lovely ride on a much better day than forecast with some fabulous views and great company, for which thanks to you all.    James G. 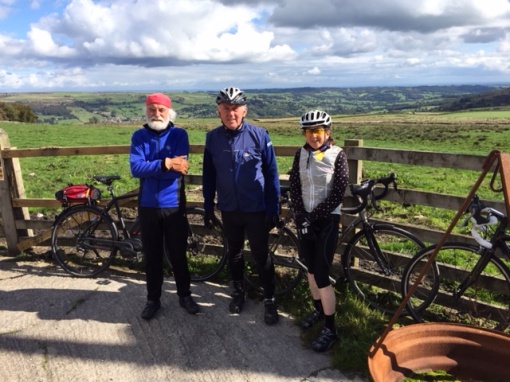 What brilliant weather compared to Friday’s forecast for a wet Sunday.  Dave’s S and W, Eric, PJ and myself had a great ride and averaged over 15mph (thanks to DS driving us on generally, but on the front and doing 25mph as we approached Cawood).
Some highlights:
– an early cafe stop at Askham Richard, sitting outside in the warm sunshine after time lost with a comfort break and Dave W’s puncture. Great service and prices, as usual.
– a formation of 10 RAF Tucanos flying near Wetherby for a show at York.
– some new roads for all of us. And, apart from the A19, quiet roads generally.
– good banter, particularly at the cafe stop at Morrisons in Wetherby.  Most of this has to stay on the ride……
– one of our number telling us HE was taking his other half on holiday……
– Dave S and Eric producing long-stored snacks at Lotherton Hall.
Some lowlights:
– A black 4×4 driven by b….e woman who just continued without slowing and without any brains into a compression point with us already in it. The wing mirror was about 6″ from my shoulder and comments were made…….   And oh for a helmet cam.
– The cafe at Lotherton which was heaving, so we went on to Wetherby. Our last cafe stop had been long ago, about 40 miles previously at Askham Richard, so stomachs were ready for a boost!  John H. 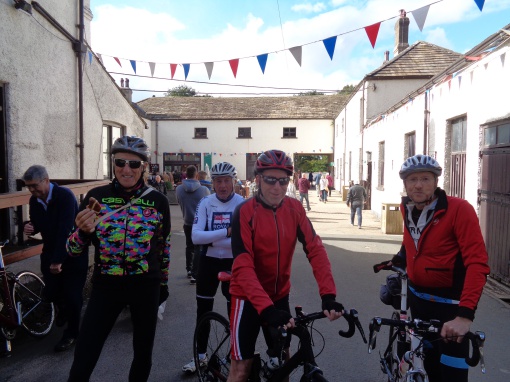