Two ladies were about this morning wanting to take a very slow gentle approach to the day. We d have loved Surjon s company but felt he d be fed up with our pace before we d done a couple of miles…thus directing him to a group of gentlemen set on not to much hill climbing at speed. Jane and I decided  a coffee and scone with the ladies of Ripley Church was what we needed, so went speedily to Knaresborough, Lingerfield, Scotton and round to Ripley. En route we discovered a garden full of house building,  a field full of young lady pheasants, a hedge full of sloes, a sky full of red kites, a church full of people scoffing coffee and cake, (they will be open for coffee etc til 1 every Wednesday until 11th November), and a couple of very spoilt Rolls Royce chauffeured dogs and their besotted owner.
Back along the Greenway meeting a variety of dogs taking owners for walks.  A pleasant morning out with not too many miles covered. CG

A less-than-cheerful weather forecast did not prevent 19 of us in total opting for the ride; (there was also an ‘additional’ Wanderers’ ride going somewhere far away…). We split into 2 groups, with Michael Smith leading the first, faster group. We agreed to regroup at Little Almscliffe. Leadhall Lane, Rossett, Squinting Cat to Beckwithshaw. My main concern was the potential headwind when climbing Norwood Lane to Stainburn Woods, but it turned out not to be too bad. The rain held off for the group photo, and we set off towards the Sun Inn, but it started raining before we got there. A plan B had been formulated which involved calling in at Fewston Farm Shop, but by the time we got there it had stopped raining, so we carried on across the A59 and then right on Meagill Lane towards the ‘barriered’ road. Sheep were being herded into a trailer which blocked our way, but gave us a break. Right at the end of the barriered road along Menwith Hill Ridge towards Swarcliffe and the Pink Cottage, where one must turn right to avoid the steep down into Birstwith followed by the steep up. Paul B missed the turn, but only got a short way down the hill before he realised his mistake. It had started raining fairly heavily by this point, and we made full speed through Clapham Green to Sophie’s, which was heaving. Alison was not feeling well and went straight home, but the rest of us partook of refreshment. Back up Clint Bank Lane to Hollybank Woods and Ripley and the Greenway.     About 26 miles.     Joe 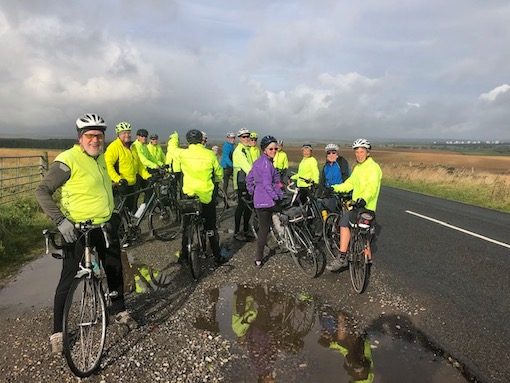 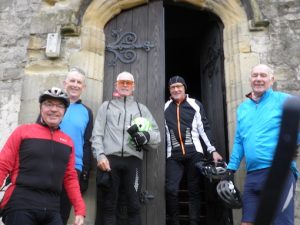 Myself, Mike and Colin set off towards the Greenway and Ripley picking up Liz F, Allen and Mike P. We made our way up Scarah Bank leaving plenty of room so cars could pull in to avoid the holes in the road, some did not and hit them at high speed. Liz reminded everyone, after her experience a few days earlier, of the puddles, mud and debris on Watergate lane, so we took it easy. Then through Studley, Ripon and on to 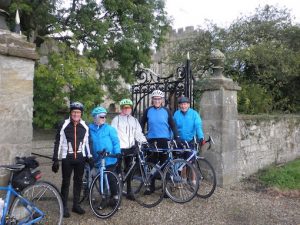 Masham, we had a couple of short, light showers. Just outside Masham we came across the ‘road closed’ signs on the road with cones, so we carried on slowly only to see an empty JCB at the side of the road and no signs of anyone working! In Masham it was decided to carry on and stop at Thirsk for coffee. At Snape the small chapel was open, so we stopped for a look inside and learn some of the history. We made our way to the A61 and on to Thirsk, another short, light shower. We stopped at the café and as we walked in the assistant looked at us and said “ you are all dry, have you not been in the rain?” our answer was “we have just had a light shower a few miles back” she then told us of the very heavy deluge of rain that had gone over Thirsk, so that’s why the A61 was very wet with lots of puddles, we missed it! After coffee and food, we then set off to Dalton, Topcliffe, Cundall, Boroughbridge and home. A very good Autumnal ride. 68miles. Chris R

The weather forecast was a bit changeable ? however it was still a good turnout at Low Bridge, consultations were held with our weather experts and Wetherby was chosen as our first stop.

Today we were joined by Gill Fellerman (a pleasure to see you Gill), amongst the EG`s Gill is well known for her hill climbing abilities but today we could only offer her the flat lands of Yorkshire and assure her that the coffee in Morrisions was of a reasonable standard.

Away we went, as usual forming into small groups for safety, desired speed and required distance with the aim to arrive at roughly the same time, and we were not far out.

Here Bill and Norman cut left at North Deighton to look for a previously lost pump (good luck) with Dave P and Theo heading for the comfort of Knaresborough and home.

A good ride in reasonable weather though at times it threatened to be a CoCo day , an old CTC name for Capes on, Capes off, Capes on Capes off.         Dave P.

With five at the roll-out plus a returning Graham W, joining us at Beckwithshaw, the Long Ride headed west into the wind, bound for How Stean and optionally some derring do on the return leg via Yorke’ Folly.  The forecast was for blustery showers for much of the day and its promise was duly kept as we passed Menwith.  Turning our backs to the weather we descended Stumps Lane (excellent surface) to Dacre and thence to the toll bridge. The ascent of Stripe Lane came next, followed by a coffee stop at Brimham Rocks Adventure Farm.  A first time for all, I think, this venue proved more than acceptable, with a good scone rating from Lesley.  It also allowed us to thaw and dry a little.  Over coffee Graham shared some of his recent cycle camping tour in Georgia (Black Sea).  Look out for a very interesting “Traveller’s Tale” in January.  After coffee, Andy and Dave R turned towards Brimham Rocks and an early finish, while the remaining four descended towards Pateley and another cold squally shower, then taking the road to Wath past the Sportman’s Arms and on to Gouthwaite.  It’s been a long time since this reservoir has been as full as it is now – trees at the edge of the water were standing with two thirds of their trunks submerged and the usual muddy flats at the Ramsgill end were not to be seen.  Another shower before the lunch stop set us up nicely for some cyclists’ grub – well-filled bacon sarnies for Lesley, Richard and Graham with a week’s supply of beans for yours truly.  Having battled a headwind outwards to lunch, we were rewarded with assistance on the return to Pateley.  Pausing at the Bewerley turn to scan the skies, the ascent of Yorke’s Folly was banked for another day, in favour of a climb up through Glasshouses to the Ripley road and a real blast down the valley.  Reaching the crossroads at Burnt Yates, we realised that we hadn’t had any more showers since leaving the turn at Bewerley.  Maybe we missed out on Yorke’s Folly? Graham peeled off at Clint to head for home via Hampsthwaite, while the steady three ambled along Hollybank Lane and the Greenway to Bilton where farewells were exchanged for another week.  After a week in the sun, it was certainly a shock to my system to be cycling in cold showers and temperatures roughly half the number of degrees.  Cycling life’s rich pattern, of course.  Nevertheless a good day out was had with sun, rain and wind playing their part but only proving minor detractions in the end.  Thanks to all.  Terry Smith

Ride Report France – Yvonne and Martin have been staying at the HPB Village de Constant near Bergerac in the Dordogne region.  They were unexpectedly joined by Di and Eric so what do Wheel Easy members do? Go for a bike ride of course!  Also joining us were Hillary and Andrew cyclists from The Cotswolds area. Particularly noteworthy was Andrew’s classic vintage Dawes Galaxy having been recently restored.  On a warm sunny morning our ride took us along quiet lanes in the most scenic of countryside with the first stop at St Alvere for coffee. Then after a climb out of the village we were on a long swoop down following a valley with goat herds, sunflower crops, and fields of millet to the village of Tremolat by the River Dordogne for lunch at a bistro.  Well fuelled we climbed up the Cingle de Tremolat, pausing to take in the views over the river then we followed a deserted lane along a ridge with magnificent views that eventually dropped us down to St Foy and then back to Constant for cool drinks in the late afternoon sunshine. 30 sunny hilly delightful miles.   MartinW. 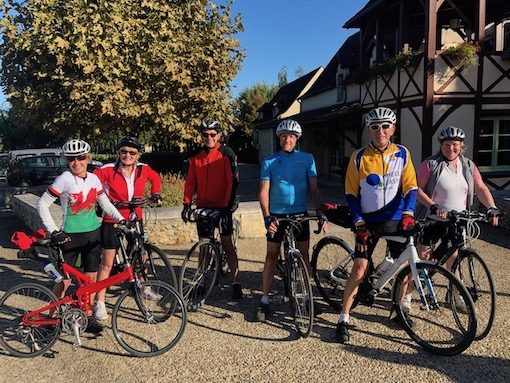 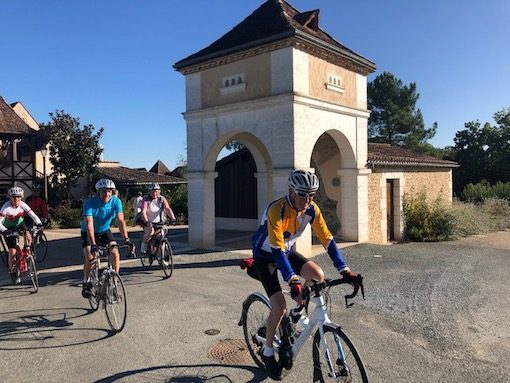 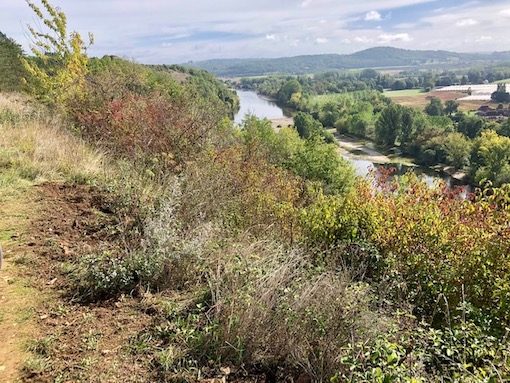