It was a pleasant day for our first programmed short ride since those long forgotten pre-Covid days!
Our group comprised Barbara, Diane, Paula, Fiona, Peter and Mike, with this being Diane’s first club ride. We set off from Hornbeam on a ride which was fully planned as far as coffee in Ripley, flexibility being the order of the day from there. Peter, Barbara and Diane continued on towards Fountains Abbey, whilst the others returned homewards.
It is good to note the interest in this group, although the impression from today is that the interest is in moderate pace, rather than short distance.
Apologies for forgetting a group photo!

Another week and another treat for the Medium Brisk Group, that once again being oversubscribed in the eyes of her Majesty’s government was required to split into two. Heading off on the well ridden Fountains / Ripon route after a detour to collect a forgotten water bottle and an involuntary dismount on the Greenway, thanks to an aimlessly wandering hound, we soon settled into a very sociable pace. Despite the regularity of covering this circuit there is always something new to see, and today was no exception, with a majestic herd of young stags meandering across our path as we transited the deer park, seemingly oblivious to our presence they appeared as almost curious spectators, but for us a real delight to see these magnificent creatures close up. Onwards to Ripon square and a standing alfresco coffee and snack, before heading back through the lanes to Knaresborough and home. An enjoyable morning out , and thanks to Vince, Tim and Jeremy for their usual fine company. 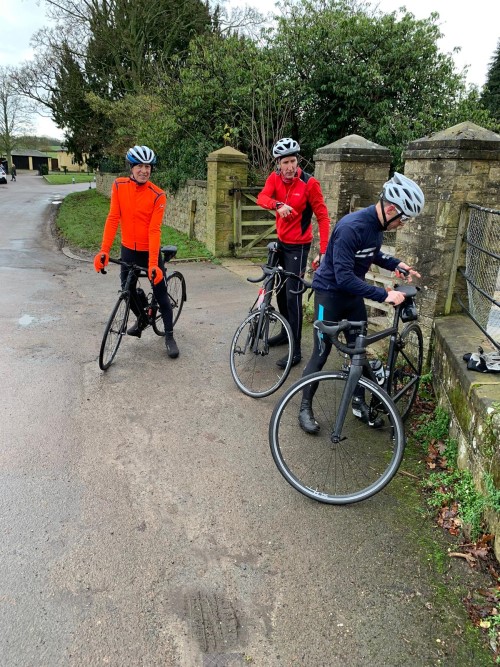 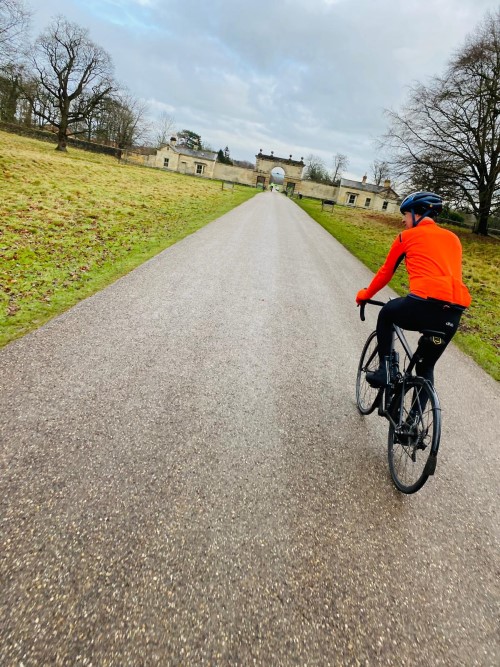 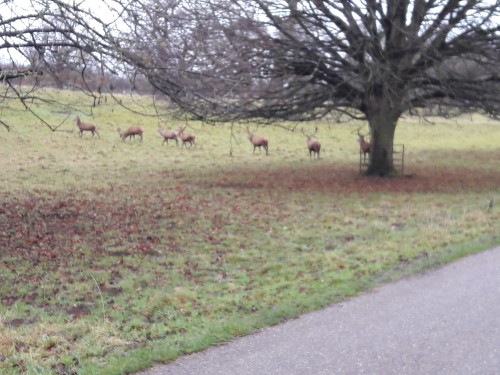 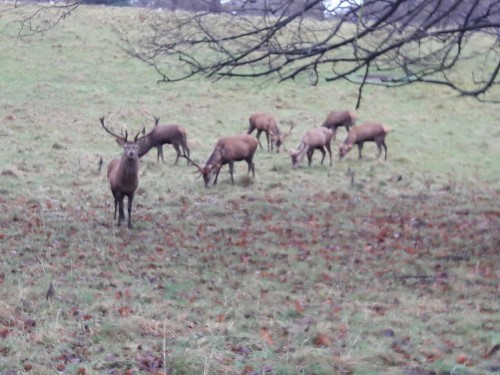 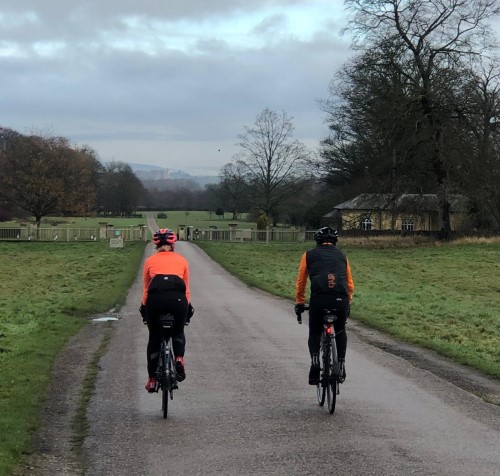 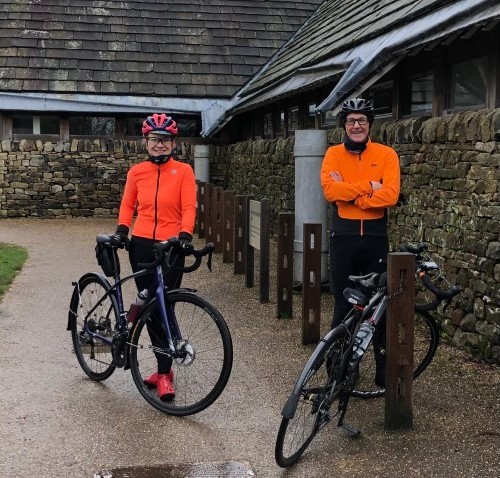 The EG’s have continued to get out on two wheels and to meet whenever serendipity or the guidance has allowed but on an unofficial/informal basis and not part of the Wheel Easy ride programme. I thought it was about time we reported back on an excursion from Low Bridge. Seven assembled at Low Bridge but Bill was there to see us off, so we said good morning and farewell leaving a guidance compliant six to head for Ripon under the leadership of Dave W. Dave W’s rides are a great experience, they usually involve roads that I haven’t been on or roads joined up in a totally unexpected way. Spa Garden for lunch said Dave and we headed off on the usual route out towards Farnham. After the cross roads and road works we regrouped heading for Bishop Monkton.

At Bishop Monkton we turned left, clearly Dave W was in an adventurous mood, by the time we arrived at the A61 comfort breaks had begun and Dave P2 had to answer a different call via his mobile. In spite of the interruptions we were soon together in Markington where Geoff, Marvin, John and Dave W were waiting for the stragglers pointing down the now infamous Western’s Lane. We shared concerns and agreed to take it carefully, we knew where the danger point was. Water had been sitting on the road and as a result the surface had become like ice due to algae. Dave W led and we followed, the roads had been pretty mucky and this was no exception. An e bike rider on his way to Fountains recounted me with stories of air ambulances just what I needed!

All of us made it, using the dry side of the road; I didn’t dismount and walk past the spot although it would have been interesting to test the road surface while off the bike. I get more cautious the older I get, not sure why, perhaps it is because I don’t bounce like I used to?

We emerged on the Fountains road and completed the drop past the lovely Abbey views. What had caught our eye from the high points was the mist/low cloud in the Vale of York and along the A1 corridor, with the North York Moors rising above. We passed Fountains heading north and not towards Ripon, Dave W clearly had different plans and the casual mentions of a coffee would be good were put to one side and we headed northwards along more very mucky roads through Low Grantley, Winxsley and Kirkby Malzeard.

One of the benefits of not only not knowing the route or being able to guess it is that the group stays together, get too far ahead and missing a turn is likely. John likes to sit at the back but it’s probably a good idea for him not to let the gap grow too big just in case, we always wait but just for peace of mind! The net effect is the group stays reasonably compact; individuals can communicate more easily and negotiate hazards. We don’t have to wait until a coffee (other beverages are available) stop to chat or share a joke. It is easy to announce a stop, instruct the rest to ‘carry on I’ll catch up’ or spot that someone is missing and wait.

However, when we emerged onto the Grewelthorpe/Ripon road and the route seemed obvious those with the inclination took advantage of the general downhill run and simultaneously pushed on and turned the clock back. Marvin and I took the long way round in Ripon so we all managed to arrive at a similar time after about 30 miles. We had a socially distanced take away in the fortunately not too cold air at the Spa Gardens, watching York CTC wrestle with a Rohloff rear wheel. Having persuaded John that he could turn off the ping on individual WhatsApp groups we pondered on the meaning of life, the pros and cons of tubeless tyres and disc brakes, the merits of hybrid and electric cars.

The direct route back was never going to happen; Dave W found a different to usual route (for me) through Sharrow, Marton le Moor and on to Boroughbridge where we regrouped. The air was noticeably cooler; see earlier reference to mist and low cloud but we kept up a decent pace to keep warm as much as anything. We did split and reform for a variety of reasons but we all found our way back to Farnham cross roads, except John who had pushed on. We started to go our separate ways as I headed for Ripley while Marvin, Daves P2 and W and Geoff split up in Knaresborough and were spotted by Dave P1. All home safely after a great ride 50+ miles and nearly 3000 feet of climbing.