Even the cold and rain couldn’t put off a decent number at Hornbeam, five of whom opted for the medium + route or a variation of it. Mike, Richard, Karen, Barbara and I (Chris) set off towards Forest Moor and Knaresborough.

Our group highlighted what an open church Wheel Easy is with a range of cycling experience and backgrounds; people who might be lost to the cycling community without the accepting Wheel Easy philosophy. It was good to chat once we were clear of the busier roads which seemed unusually quiet.

The rain seemed to intensify and extra waterproofs were donned by Farnham cross roads where the traffic lights are still in place, unlike the Manse and Chain Lane ones where it is now clear. The road layout is modified but no extra thought for cyclists as far as I could see. Richard was the first to spot a rainbow; we could see the full cheerful arc in what was a rather grey sky. At Copgrove we took the gated and rough in places route emerging on the Roecliffe Bishop Monkton road; a first for me.

The cold was beginning to tell, pedalling at a high cadence didn’t seem to work, nor did pushing a bigger gear! So when asked if we should stop at Boroughbridge for a coffee there was quick and unanimous agreement.

I like to think it was my low body fat but much more likely not putting on an extra layer that made me look cold to the point where Karen (I think, might have been Barbara) suggested I take advantage of the blankets on offer as we waited for and then consumed various warming options outside Plenty. At least 11 cyclists including us called in. The café proprietors I have spoken to certainly value the contribution cyclists make to their businesses especially during lockdown.

Much debate about the route and Mike describing a good way home for B, K and R. When it came to it we all decided to head for home via the Dunsforths, a bit further than Richard had wanted but he impressed with his pace on his ‘vintage’ steel 5 speed, completing his longest ride by the time he arrived home!

I parted company at the Farnham cross roads where I headed off towards Ripley while the rest went towards Knaresborough and the Beryl Burton Way; an amazing woman who overcame sexism and bias during her racing career and told me off for swearing about 50 years ago!

Completed about 35 flat miles on a day when, without the knowledge that there would be others waiting at Hornbeam Park, it would have been easy to get another hour in bed without the satisfaction of getting the best sort of exercise in excellent company with people I hadn’t met before. Chris Bishop

A good many riders at Hornbeam this morning with the weather being better than promised in the forecast. 7 opted for route 198 and split into 2 groups – the 2nd group being Tim No. 1, Mark O and Julie. Ahead of them Vince, Mark, Tall Tim and David wound their way up in spitting rain to Nought Moor and down Yorke’s Folly before taking tea at Wildings where the service was as good as ever. Off back up to Glasshouses, up to Smelthouses and along to Brimham. Despite mudguards, all 4 riders were right mucky by the time we landed back in Harrogate. 36 miles in all. 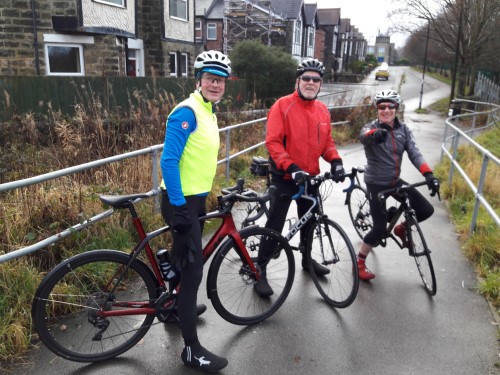