After much deliberaton and debate, we set off, on not the best of birthday days, towards Spofforth, with the main intention of finding a cafe for a good cup of coffee and a snack by 11.30 to enable us to celebrate a big birthday in a fitting style.
Even with a head wind we made excellent time greeting the EGs appropriately at Low Bridge and by 10.45 we were already at the planned but rejected turn off to Spofforth, and by 11, we were in Wetherby and onto a glowing golden Harland Way….. by 11.30 we were sitting in the Castle Pub with a good coffee, smarties and an interesting snack menu in front of us, having been joined by Jill taking a quick break from paying our pensions, to give birthday lady greetings and joy.
After an hour or so of putting the world to rights….what on earth is the matter with all these Americans, we set off in glorious sunshine and home. The glorious sunshine was obviously hiding a large black cloud or two and within 10 minutes we had found Glyn and become soaked right though….except perhaps birthday lady who was dressed from to toe in flashy flashy new birthday cycling gear. So a quick sprint home and for one at least straight into a boiling hot shower. Not many miles 21…but a lot more laughs. Caroline G 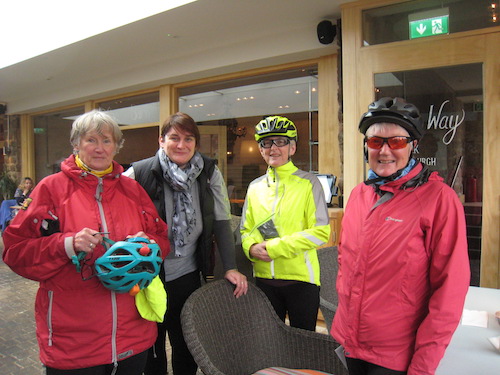 Weather forecast for this morning was brisk wind, wet and rain at times, but there were still sixteen riders keen to join the wanderers. However it did turn out to be far better with no rain, nearly dry roads and no noticeable wind (I must have read the wrong forecast).
The route today was Burn Bridge, Kirkby Overblow, Sicklinghall, Wetherby, Cycleway to Thorp Arch Trading Estate, (coffee stop), Cowthorpe, Little Ribston, Spofforth, Follifoot and back to Hornbean via Show Ground.
We picked another cyclist up in Burn Bridge but also lost one to mechanical problems who decided it was best he went home to fix it. Liz had agreed to back mark and was doing an excellent job.
A quicker (fitter) group agreed to go on ahead up Walton Head Lane and regroup in Wetherby. All then progressed through Wetherby and to welcome coffee stop at Thorpe Arch. Alison agreed to take over as back marker for return journey.
Mike, Collin and myself left the group in Ribston to make our way back to Knaresborough arriving home just before heavy rain started I hope all the rest also managed this.
Thanks to the two back markers for their support and a very enjoyable 33miles. Steven P 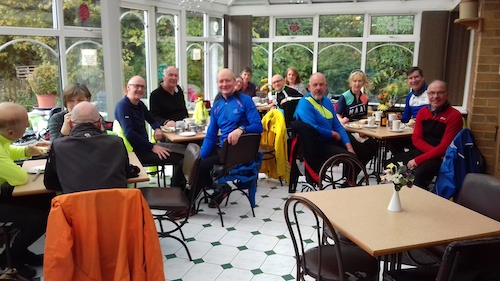 In spite of the poor forecast four of us, Gia, Paul, Alan and myself, rocked up at Hornbeam and left, heading for Little Almscliffe, in relatively benign conditions.
Our optimism was proved right, although with damp roads and soggy leaves discretion dictated we leave Jack Lane for another day and instead headed to Menwith Hill and a photo opportunity which regrettably does not show the lovely view behind the we had across the dale. Sophie’s was the next objective so we turned down Old Cote Lane (?) and then left down towards Kettlesing at which point our luck ran out and a short sharp shower pursued us down towards Clapham Green, but soon blew through.
After some “Conservatory” envy over a beautiful new Conservatory on a house just outside Tang we flew down to Hampsthwaite drying off as we went.Coffee and scones ensued and Gia managed to talk the management into a side order of cream cheese and pickle which was happily accommodated and a possible addition to the menu may be the result. A full “Agenda” of discussion items was successfully completed and thereafter we returned home via Holly Bank and the Greenway, just before the worst of the early afternoon rained arrived! 30ish miles give or take. James G 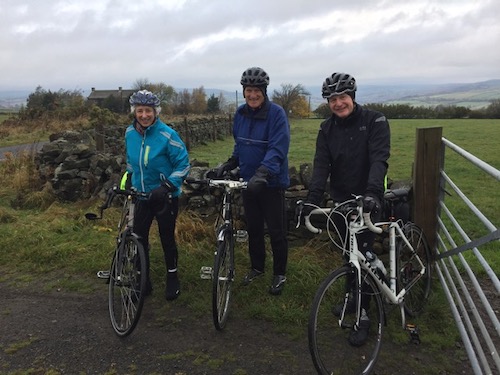 Today’s Long Ride was long on ambition but, due to the weather, short on delivery and takers (just three). Devised as a sort of North Circular, the planned 60 mile route took in Almscliffe Crag, Leathley, Norwood Bottom and Fewston Farm shop as the first leg to a cafe stop. It proved to be somewhat hilly, packing in over 2000 ft of climbing in 19 miles.
Conditions were reasonable and mild for the time of year but fortunes changed on reaching the open moor when drizzle turned to a heavy rain shower which quickened our pace to the cafe. The cafe’s fire was certainly welcoming and restored morale, as did the glimpses of sun seen across towards HG.
A brief route conference soon decided to lop off the intended detour to Brimham, heading instead for Drovers and a further decision. Here, faced with the options of Fountains to the left, Bishop M and ultimately Boroughbridge straight ahead and Ripley to the right, we called in a day and opted for Ripley and the Greenway.
Unfortunately, the weather hadn’t called it a day, giving us a thorough soaking from Bilton car park onwards. This was clearly not the “light rain” that the forecasters had predicted and the sunny intervals proved to be mere shafts of sun in a continuing downpour – but the rainbow was nice! At just 40 miles it couldn’t truly be described as a long ride but it was enough given the day. My thanks to John S and Graham W for their company and brisk pacing. Terry S 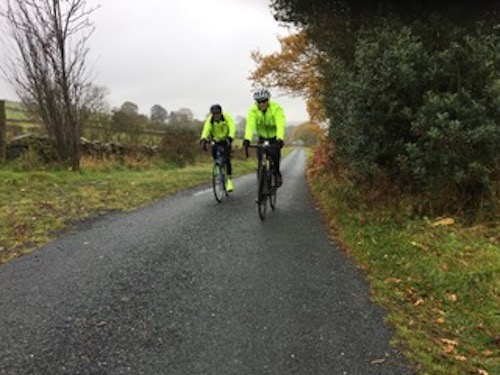 Considering the forecast, the turnout this morning at Low bridge was pretty good with about a dozen riders ready for the off. As a matter of respect to the stiff Southerly blowing, it was unanimously agreed to breakfast in Wetherby at our customary watering hole. The wind made the ride down there quite an effort and it was with some relief that we arrived at good old Morries, where a toasted teacake and a pot of good tea can be bought for a little over two quid; quite remarkable value.
As ever a faster group was forming but we were pleased to be joined by Chris, and Dave W who had managed to get his pass signed for a full five hours today.
The prison cafe at Askham Richard was chosen as the lunch stop, and navigational duties delegated to the said Dave W we were pleased to venture on one of his mystery trips. I don’t know how he does it but even when you would believe that we had covered every conceivable road in the area North and East of Tadcaster, he still finds us routes we have never seen before. Well done Dave, and thanks.
Chris dived off in Walton for a dentist appointment, and the remaining six navigated the said lanes eventually arriving, still dry, at our venue.
Lunch was partaken, with some cold beans having to be returned for reheating, and with our deadline of a 3.00pm return to Knareshborough in mind, we were about to set off when the heavens opened.
This was the promised downpour which had kept a lot of our usual crew in bed. Suffice it to say that we all got soaked. Fortunately the wind had abated somewhat and it was not too cold,and so we eventually arrived back on time.
Thanks again Dave W, Richard, Phil, Geoff, Dave R, and Chris for a good day out. DaveS.