Unfortunately several El Butler fans were either celebrating birthdays or hospital visiting or going to weddings or had read the weather forecast and believed it. Three stalwarts joined El Butler as he lead us through glorious colours and not unpleasant autumnal damp on a roundabout route towards Ferrensby.
We arrived at Arkendale ten minutes too early for our two minutes silence, so we sped on to Staveley where we did the silence and heard the story of El Butler s brother in law, who was blown up aged seventeen on a merchant navy tanker in the Atlantic.
Seven minutes after this we were drenched to the skin the weather forecast was remarkably accurate today. A downpour for the next hour or so. People needed to return home as quickly as possible. Only bribery would encourage El Butler to zoom on as quickly as possible and not wait for the one straggler who was in fact quite happy to return home at her own speed. So at Sandy Bank Lane we went our own ways home….content to have our coffee, scones and bacon sandwiches at home. Thank you El B as ever a super ride despite the yet another drenching. 12 glowing miles, 10 soggy miles. Caroline G.

Geraldine did the ride announcements this morning, as the usual suspects were on the other, earlier, Remembrance Day rides. Ten chose to come with Geraldine and me out eastwards towards Wetherby and Walton, and we knew that Paul B and Max were due to join us after crossing the ring road at Rudding on our way to Follifoot.
It wasn’t raining at Hornbeam, but the forecast was for rain in the morning. The route on the website said Harland Way, but this was considered likely to be very muddy, so at Spofforth we detoured to Little Ribston and North Deighton on our way to Wetherby. We wound our way through the side streets past Aldi and All Terrain Bikes and picked up the cycle path under the A1 towards Thorp Arch. There was some concern expressed in the group that the leader had gone wrong at this stage, but the expression ‘ye of little faith’ was applicable. We think Charlie called in at Aldi, and we didn’t see him again.
At the point at which the new cycle path joins the one which continues to Thorp Arch, we stopped to observe the minute’s silence. Through Walton and along a road we rarely cycle to the old Roman road Rudgate Lane, where we turned north towards Cattal. We passed the Tockwith Driving Centre, where there was some event going on, and turned left towards Cowthorpe. The rain was becoming more persistent and unpleasant by this time. At Little Ribston we turned right towards Knaresborough. The two Chrises had stopped for an energy bar, but we regrouped outside the Plymouth Bretheren Church, having lost Brian, Dave and Alun. Brian reappeared at this point, having gone on ahead. The general state of wetness led most of the group to decline a coffee stop in Knaresborough, but Paul B and the two Chrises did choose to stop at the Riverside Café. About 32 miles. Joe S 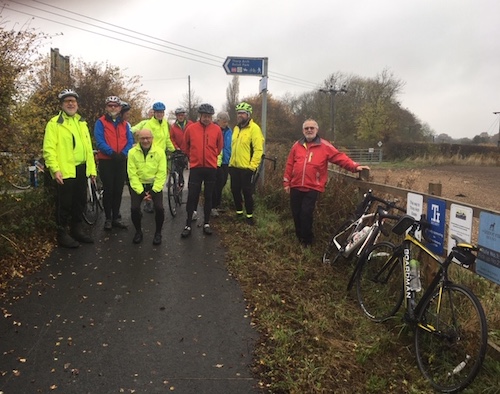 The weather threatened to rain as the seven slightly faster riders set off from Hornbeam. Despite the gloomy weather the autumn colours were still magnificent.
At Pool the group decided to climb Black Hill just as the rain started, but by the time we got to Bramhope it was pouring. We arrived at the church around the same time as Janet’s group, just in time for the remembrance day service,which had such a fantastic turn- out, that there were crowds of people (under umbrellas) taking part in the service outside and completely blocking the road. We respectfully stood for around fifteen minutes listening to the service but it was raining very hard and we were very wet and very cold (we did reflect on those who endured the trenches in far worse conditions).
Eventually we retraced our tyre treads back to the main Otley road where two of the group decided to head for home at the top of Pool Bank, while the rest of us peddled furiously to a coffee stop in Otley. After hot drinks, soup and sausage sandwiches, we headed back to Pool and through the newly named “Castelli”, at which point we crossed the main road to Gravelly Hill Lane and then skirted around Great Almscliffe to North Rigton.
The sun came out and we returned home on a beautiful autumn day, catching up with Janet’s group near Burnbridge. A few memorable hills, a miserable cold bit in the middle but ended in the sunshine so overall a good ride! 40 miles, 2600 feet ascent. Julie E.

Ten riders set off on a damp and cold Sunday morning -destination Yeadon Tarn. There was rain in the air and as we crested Creskeld Lane and into Bramhope village, the rain came down. Perfect timing though for us to join the local Remembrance Service.
Soggy and cold I suggested we ‘ditch’ Yeadon Tarn in favour of the ‘Cheerful Chilli’ coffee house. Unsurprisingly there were no objections and we were soon in the warm with hot drinks and snacks.The intention was to try out Bloomfield Square but ten riders might have been a bit of a stretch.
Carefully negotiating the steep East Chevin road we turned right over the river and climbed up towards Farnley. Onwards and upwards to Leathley and Almscliffe cragg the sun came out and we had to have another photo. North Rigton next and then the lovely descent down into Burnbridge and home.
No mishaps, lost no one and I was back home in Bramhope for 2.30- marvellous. Tim – I hope you found your helmet. 32 miles, 12.5 average speed and 2900 feet of climbing. Perfect – thank you for being a great group. Janet G 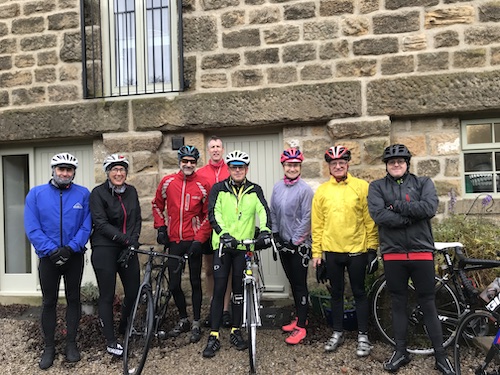 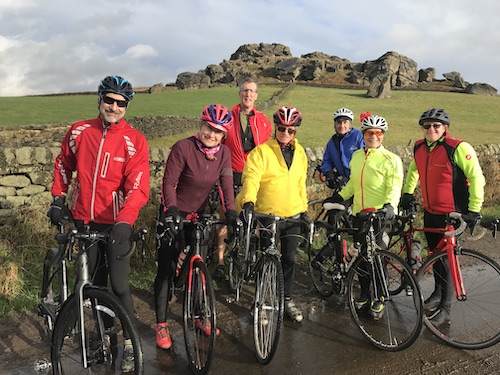 Seven riders set off from Hornbeam on a rather damp and misty morning – I’d had my cycle lights on from home to Hornbeam Park. After 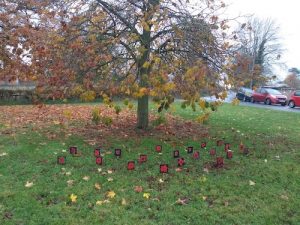 Thornton Bridge we were joined by Julie W, who would cycle with us for some of the route, helping her get her cycling legs back after illness (7+1=8).
At Little Sessay, Phil (still with knee problems) left the ride heading for Dalton and Topcliffe and an early return home (8-1=7). We stopped at Little Sessay shortly before 11.00am to commemorate the 100th Anniversary of the 1918 Armistice – on the village green opposite the church and primary school where painted wooden poppies had been planted around the tree (see photos). Two other groups of cyclists then arrived from opposite directions, and we all paid our silent respects for two minutes.
We resumed our journey through Kilburn and Oldstead, where Julie left the ride to take make her way home (7-1=6). As we had concerns about the capacity of Ampleforth Abbey tea rooms if extra people were there for Remembrance Day, we changed the plan and stopped at the Byland Abbey tea rooms instead, which we have passed many times before, but never visited. Unfortunately there was only one member of staff, and the arrival of six cyclists put her into a severe state of café shock. However the arrival of an assistant a few minutes later improved the situation, and our view was that the tea rooms justified another visit.
Whilst in the café, the intermittent drizzle was replaced by very heavy rain, and so the route was reduced by eight miles by omitting the loop via Ampleforth, Gilling East and Yearsley, instead taking the direct route to Easingwold. The rain then stopped and the sun finally emerged to give us a lovely afternoon of Autumn colours.
At Great Alne Dave S turned off for home in Roecliffe (6-1=5). Shortly before Martin cum Grafton four of us stopped to fix a loose saddle; Dave W was ahead and unaware of the problem, so was never seen again (5-1=4). When we paused for drinks at the top of Sandy Bank Andy A continued (4-1=3). At the bottom of Sandy Bank I collected a puncture; being so close to home, I urged Peter R and Mike to continue on, and not wait for the repair (3-2=1). One rider had set off from the Harlow Hills, and one Harlow Hillbilly eventually arrived home. So all riders had been accounted for, books balanced, accounting bliss! 63 miles, cycling bliss! Eric W

Seven of us cycled to Ripon Spa Gardens to listen to the remembrance day service commemorating the 100th anniversary of the Armistice.
It was a moving service, well attended by the community. It was also an opportunity to see the extensive displays of knitted poppies.
We returned in the pouring rain but arrived at Sophie’s in the sunshine. Thank you to James, Paul, Mike, Martin, Yvonne and Malcolm for joining this ride. 37 miles. Gia M

A ride of two halves; we left Pateley in the mist, and the higher we got the thicker and wetter the mist became. A vintage motorcycle club passed us twice before the memorial; but we knew where the turn-off is.
At the memorial, there were cars and motorcycles parked all over the grass verges, and we left before they all wanted to get under way. There must have been a hundred or more people there, lots of motorcyclists, lots of walkers, lots of cars…..and a few damp cyclists.
It rained properly as we dropped down into Masham, where the cafes were full. We got into the pub just before the church turned out, except Chris who went to the café in the Black Sheep brewery….worth remembering!
It was brightening by the time we had eaten, and when we reached the moor top above Pateley we were treated to views of the factories on Teeside one way, and Emley moor TV mast the other way….and a few bits and pieces in between. Dropping down into Pateley was brightened up by a herd of sheep being driven along the road as well as views up and down Nidderdale. Colin T 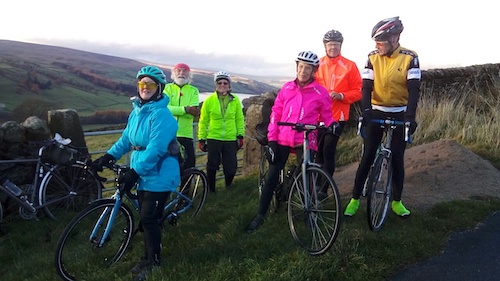 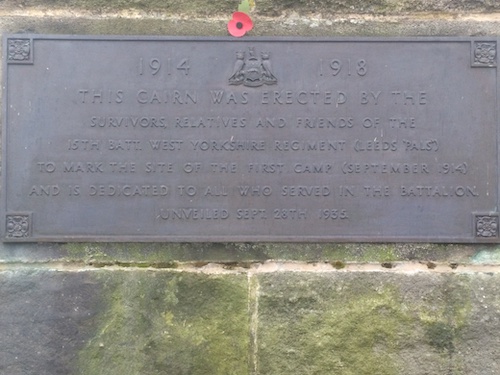 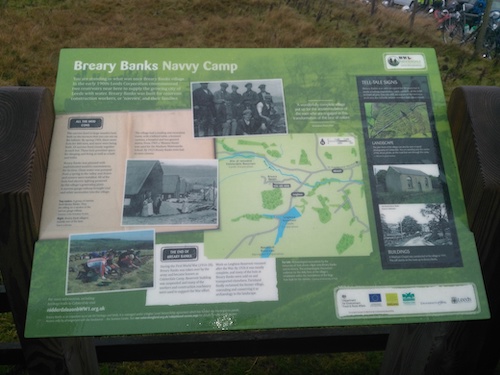 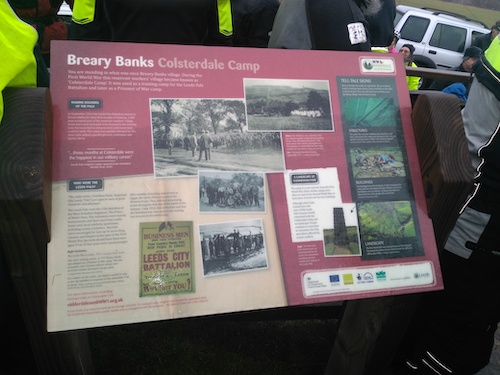 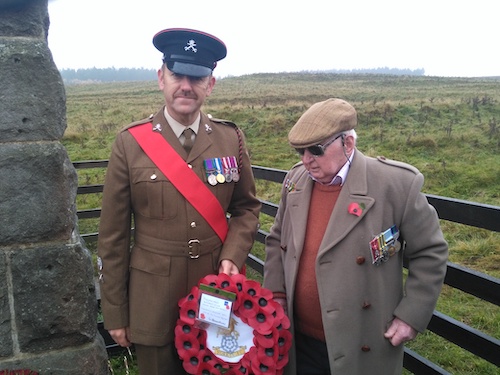