Short ride is as short ride does. About 18-19 miles on an almost balmy Autumn day. Sixteen of us were reduced to twelve when a puncture (Max was the cavalry – thanks), saw off the tail end, only to be reunited at Indulge.
We wriggled past the Squinting Cat, back down to Burn Bridge then up to Kirkby Overblow for the first time. The quiet roads of Kearby and Netherby, which were new to many, led us back to KO and across the by-pass and via a short cut full of schnauzers (yes, I did check the spelling), to Rudding and the showground hill.
New gel Tracey had her first (of many?) rides today. A couple more months and familiarity with her new bike will have her up to athlete standards. Like the rest of us (yeah, right). Thanks to Charlie for the back marking (having lost our original marker, Mrs Graham). Paul B 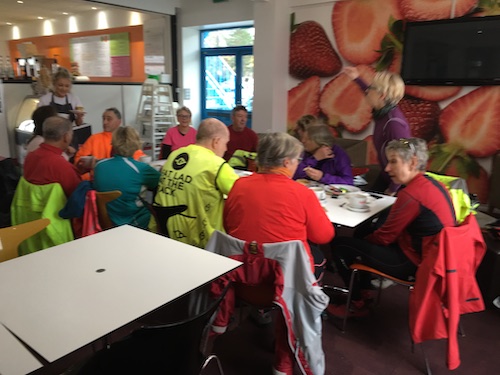 A “leaderless” four medium riders set off from Hornbeam – Allen, Richard, Colin and Peter. A early couple of off-route diversions were taken:
From Leadhall Lane; Leadhall Drive, Rhodes Drive, Bowes Park through to Rosset drive and the intended route past the nature reserve.
Harlow Ave, Beckwith Ave, back onto the published toute, but then another diversion down Nursery Lane onto Harlow Moor Rd.
Onwards to Penny Pot Lane and Burley Bank Rd through to Hampsthwaite. Much to Peter’s disappointment (I think ) we rode straight past Sophie’s and up Clint Bank heading for Shaw Mills. When we reached Markington (note roadworks with traffic lights at the moment) Peter peeleed off for a more direct route back while the remaining three of us headed for Bishop Monkton. Unfortunately, as we headed down Moor Rd, Richard made an involuntary inspection of the tarmac from about 12mph and Colin – Tour De France style – ploughed into the back of him. So it was a 20 minute puncture repair and check for injury/damage before we continued.
I suggested another route deviation, so we agreed to head through the lovely Bishop Monkton toward Roecliff and then right down the track to Copgrove. At Sandy Bank, we agreed to part ways when we reached Knaresborough, and from there made our own way home. So no coffeee stop and no photo (I thought a pile of bikes and bodies would be in bad taste). About 30 miles, average 11.4mph, 430m climb. I hope the bruises aren’t too bad team.

There was a medium plus fast group, a newly named brisk group, then there were ten of us. Well we refuse to be called the slow group because we certainly got a shift on, especially on the homeward stretch.
Justin mentioned something about us being the centre of gravity, which Debbie demonstrated by almost coming off her bike but was gallantly rescued by Kevin.
Dramatics over we sped on in the warming sun and arrived at Curious Table where Jill showing her leadership skills secured two tables for us. The brisk group were almost finished and as always nice to catch up with them for a brief chat.
Thank you to a great group to share a perfect route for a November, autumn day, lots of sunshine, very little wind and home in good time for tea. 49 miles. Gia M 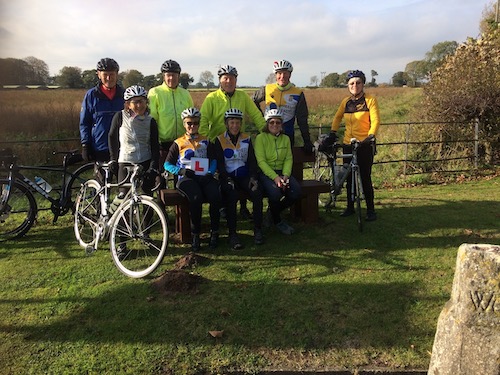 Another fine Sunday for a fairly flat ride to Easingwold. Eight riders set off for Low Bridge, picking up Mike on the way, making us nine. The clouds threatened but we were soon shedding layers in the mild temperatures.
We decided not to take the left towards Aldwark Manor after the bridge but went straight on and we were soon at our coffee stop in Easingwold – The Curious Table. Isn’t it amazing what a variety of job roles there are – Jamie is a coffee taster (please see photo) I think that this was some sort of Ethiopian blend. As you can see it did require a fair amount of strength to get at the coffee.
We were just congratulating ourselves that we hadn’t lost Tim (the tall one) when someone said – ‘he’s not here’. When he did arrive he told us he had gone back to find Collette – she was actually sat at the table tucking into her half portion of French Toast! A big well done to Collette who cycled really well, despite having a bit of a ‘wobble’ at the start. She thought that she wouldn’t be able to keep up – think again Collette- you did great.
Usual route back through Boroughbridge and the dreaded Knaresborough Hill. 46 miles at 15.5 average with 1900 feet of ‘climbing’. Perfect – thanks for the great ride everyone Janet G 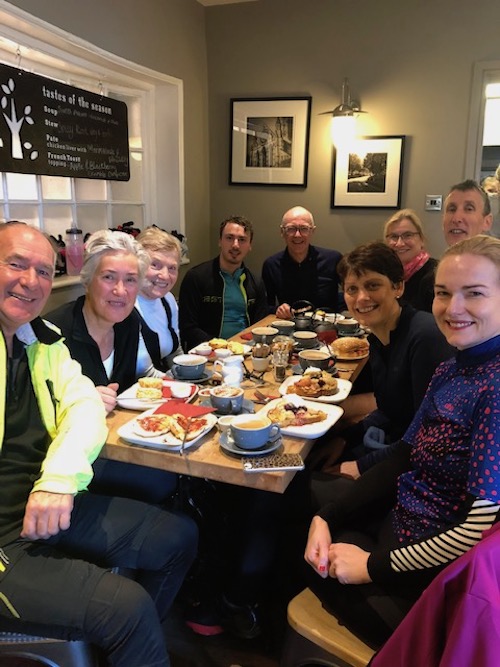 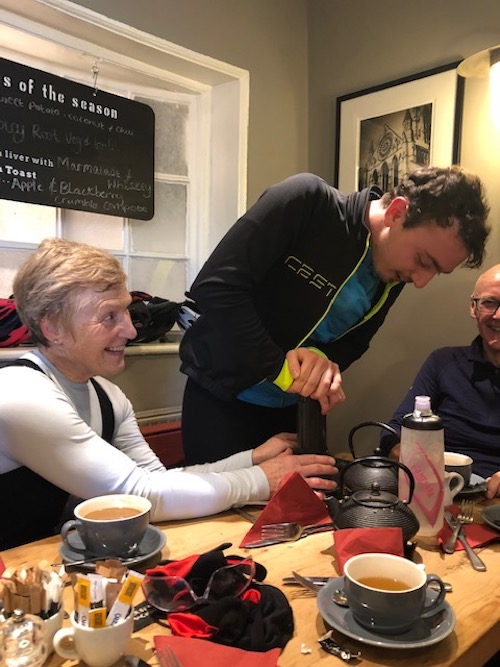 Not much of note to say about the ride today. It was a pleasant affair as 12ish of us (I’m not sure we did have an accurate count!) followed the planned route to Aldwark Bridge and then added an extra loop via Shipton by Beningbrough and Huby to come into Easingwold from the Sout East. We managed to squeeze into TeeHee! cafe before cruising home by 1400. Looks like we did about 58 miles at an average speed of just over 16mph. A good ride today in surprisingly good weather. Michael I.

Once the various Medium Plus factions had sorted themselves out it left a rump of four riders to be led by yours truly. It was an uneventful ride to Easingwold in the bright autumnal sunshine with a tail wind to help us on our journey. The Sugar Mouse was the chosen tearoom for refreshments. Given the pace of the return journey it was decided to extend the ride and return to Harrogate via Roecliffe, Bishop Monkton and Ripley. PCJ 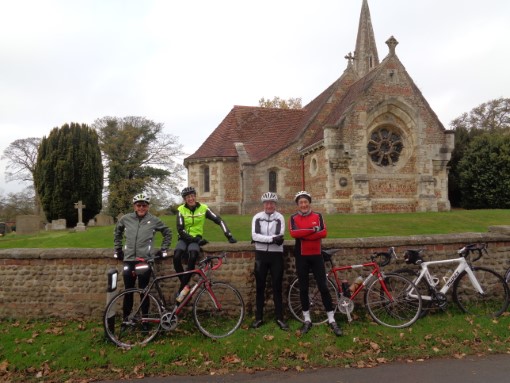 Eight riders set off expecting rain, but were pleasantly surprised by its complete absence. We even had a fair bit of sunshine.
The outward route via Kirkby Overblow, Collingham, Bramham and Stutton was into the wind, but we made good progress. Grimston Park showed off its autumn colours and before long we arrived at Mrs B’s Kitchen at the caravan park just before Cawood. Unfortunately, Mrs B was between breakfast and lunch and there wasn’t a great deal on offer. We should have gone to the garden centre cafe in Cawood instead; next time I expect we will.
The bridge in Cawood is closed to traffic for four weeks, but still available for pedestrians and cyclists, so onwards through Stillingfleet, Naburn and Copmanthorpe to the prison cafe at Askham Richard, where rations were, as ever, substantial.
Peter R casually mentioned getting back to Hornbeam in an hour, so we rattled along at a fair clip, led by Alistair, fresh from 16 days of altitude training at 4000m. Peter then remarked that it was one of his more regrettable comments!
Overall around 60 miles on largely flat terrain at a good pace. Richard L