Two new riders today, welcome Rachel and Colin. Myself Liz and Geraldine made a nice little group of 5. It was a bit of a let’s see how we go ride and resulted this route. The Stray, Claro Road, Greenway, Beryl Burton, Knaresborough Waterside, Abbey Road, Chain Lane, Hay-a-Park, Farnham, Scotton, Nidd and A61 to Ripley for a cafe stop with the nice ladies in the Church. Back to Harrogate via the Greenway. Approximately 23ish miles on cycle tracks and quiet roads. Jean 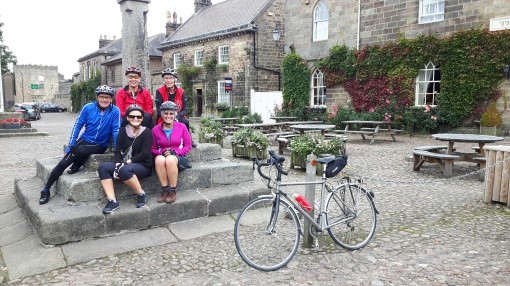 The goal of today’s ride was to visit G&T’s at Risplith. So, how to get there? Knaresborough, Bishop Monkton, Markington, Sawley was the chosen route. 4 whizzy Wanderers set off, agreeing to wait at Markington. The rest of us proceeded at a more sedate pace to Low Bridge and Abbey Road. There was a buzz of excitement as we passed the new Lidl on Chain Lane, but everyone stayed on course. Charlie instigated the freewheeling challenge at Occaney. Some of us clearly need more practice! The whizzy riders had added 2 more to their number when we met up at Markington. All of us, except for Dennis and Peter, headed off towards Fountains. They took themselves back to Harrogate in time for lunch. The whizzy group sped off again to alert G&T’s of the approaching peloton. Here the refreshments were as good as ever. Conversation was wide ranging, potent cocktails, the number of bikes you have/need, criteria for a tasty scone and more. We spilt up again to enable the faster riders to go at their pace. The rest of us stopped for a play at Sawley playground. There was almost a safety crisis as Mike the Vet ‘scaled’ the climbing net. Fortunately, he managed to hang on and settle himself. After a climb up to the edge of Brimham, it was a lovely ride down to Rabbit Hill Farm and then to Ripley. We used the Greenway to get back to Harrogate before we went our separate ways. A great ride with the usual cheery companionship. Thanks to Chris R for backmarking. Stats [queries to –arblasterstats.com] – 35 miles, 1750 feet of climbing, 1270 calories used. Alison N 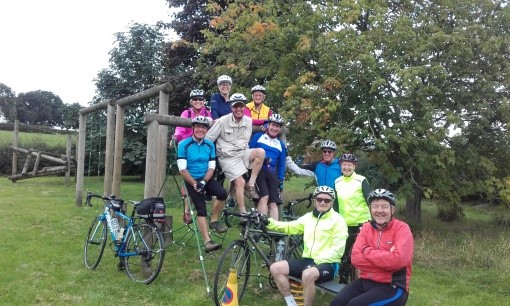 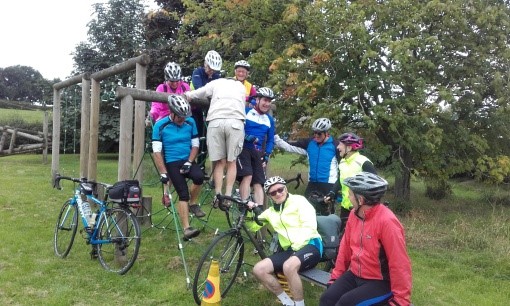 My suggestion of a hilly ride in the West End direction was taken up with some jovial comments about the challenges ahead, but 10 riders were up for it. Our route to Fewston rang some changes going via Pot Bank, along Penny Pot Lane and then up the main road in the direction of Timble. Everyone made the steep descent safely to Blubberhouses and once across the main road we were on a lovely, quiet, winding lane that led to some great views along the top. After the first steep hill was completed, we had a group photo by the Reservoir Road and there was some banter about the next imminent steep hill and other route options. At that point a taxi came by and we had to curb some from taking that opportunity! It wasn’t long before the grind up the next hill was achieved and we had some downhill respite before the final climb up to Duck Street. Gia and Paul decided to take a quicker route to Sophies, and the rest of the group made their way there via Thornthwaite, Darley and that Birstwith B…. hill. Janet did a great job as traffic warden directing Bob into Sophies, ensuring that he couldn’t repeat his sorry tale of the one time the group had deserted him and he missed the coffee stop (or was it that he shot off in the lead on a fast descent…) Not far to go home now – we enjoyed relaxing and chatting in the garden with some well-deserved refreshments after the exertions of our ride. About 34 miles. Monica W 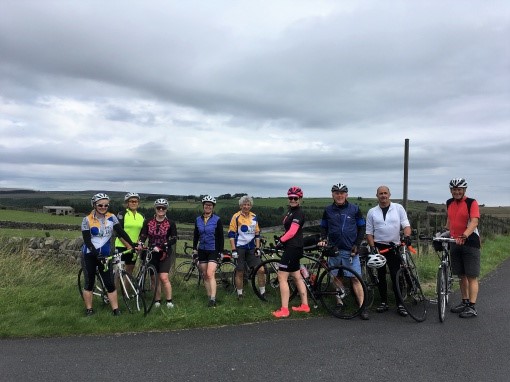 Great indecision at the start of the Long Ride but eventually it was decided to go to Tadcaster. Leaving Hornbeam via the Show Ground, carefully avoiding a trench, we made steady progress to Spofforth. It was then onward to Little Ribston, Cowthorpe, Rudgate, Wighill and finally Tadcaster. Horror of horrors, The Lemon Tree café was closed (for this week only). Good news we found another café, bad news it only sold squares of very gooey chocolate squares, but four hungry cyclists were up to the challenge. With four riders deciding to return to Harrogate it left yours truly and Trefor to set off from Tadcaster and head for Cawood. After Cawood it was a case of following the well ridden route of Stillingfleet, Naburn, Planets Cycle Way, Askam Richard for soup and scones, Long Marston, Cowthorpe, Knaresborough and home. PCJ 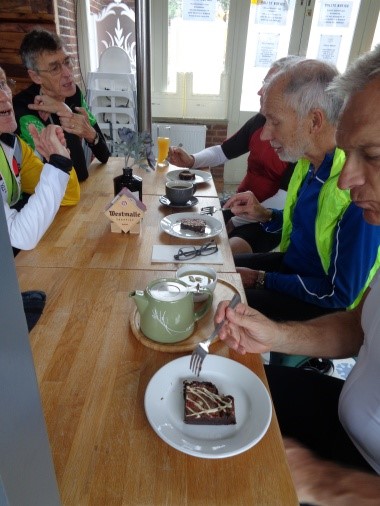 We had a large turnout at Low Bridge, 16 plus? riders.
The ”A” team suggesting North, and as we had to inform some riders where we were meeting, Boroughbridge was chosen for our first stop, and of course our numbers meant that only Morrisions` cafe could cope with us.
Away went the “A” team, some of the riders in the “B” team (a magnificent seven) had a second cuppa before we headed out.
We headed south on the old A1 then a left towards Aldborough, a trio took a right towards Marton and Grafton with its hills (hope they were not a problem Theo).
The quartet entered Aldborough on to the Dunsforth`s and Great Ouseburn, Peter B turned left for Aldwark bridge and into the wilds, probably to meet up with Bear Grylls!
Then on to Thorpe Underwood and into Whixley Village (to avoid the climb to the old Hospital), crossing the A59 and the level crossing, back on to the old A1 and on to Walshford and the cycle track to the minor road to the B6164, then Little Ribston, Spofforth, taking a pleasant break on a bench alongside the A658, then Nick headed for Starbeck (great performance) with Bob S and Dave P heading for the heights of Harlow Hill.
We had been lucky with the weather, no wind or rain, Dave P had 41 miles in, but Bob would have done at least 45 miles, using only 25% of his potential.
All three riders chuffed with their efforts. Dave P.

The Bay Cycle Way hugs the coast for 80 miles from Barrow-in-Furness, through Morecambe and Lancaster, to the sleepy canal port of Glasson Dock. There are just ten hills on the whole route, and the only difficult one has sticky toffee pudding at the top. (Really.) 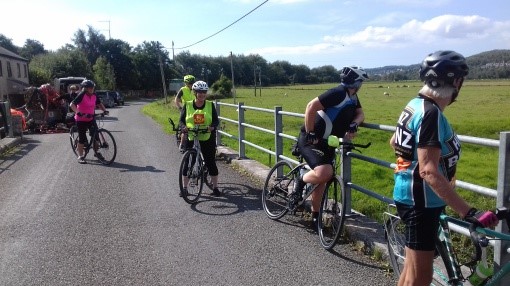 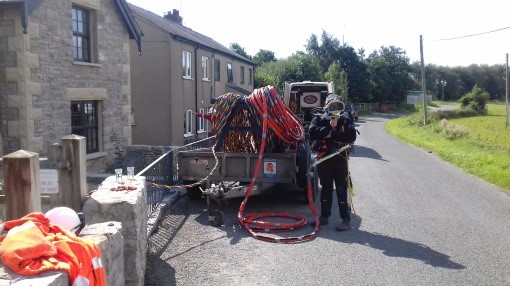 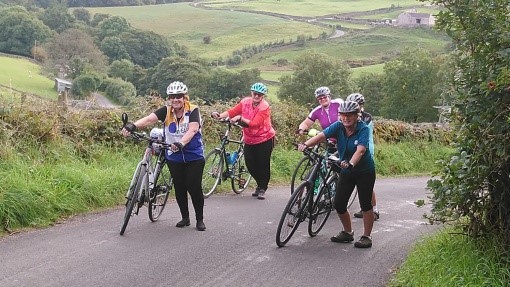 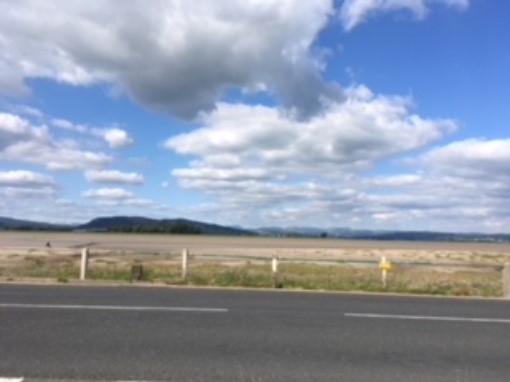 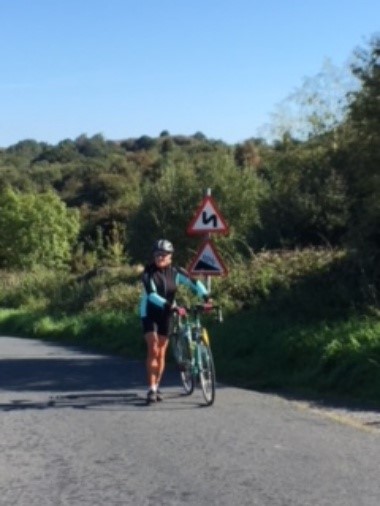 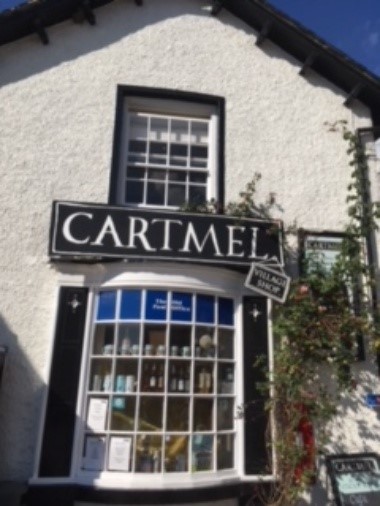