A leisurely 22 miles.
Paul B 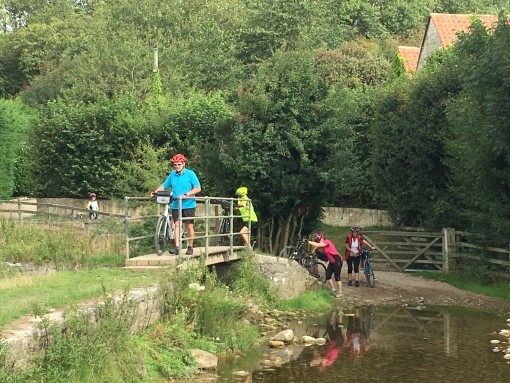 Most people seemed to find the prospect of Brimham Rocks and Dallow Moor too tempting, so it was a small and select group of six who set off for Tadcaster. We were very lucky to have much better weather than forecast, so it was sunshine all the way. We headed first for Collingham via Burn Bridge, Kirkby Overblow and Sicklinghall, then it was up Jewitt Lane and down to Bramham. There were lots of cyclists on the road and we met a huge bunch in Tadcaster. We decided on coffee at Thorpe Arch. After refuelling, Geraldine discovered she had a puncture and we were all in awe of Joe who promptly put on a natty apron to change the inner tube. Well prepared or what? We went up the cycleway to Wetherby and then took the Harland Way to Spofforth where the group split up to head home. Geraldine unfortunately had yet another puncture meaning a lift home was needed.
About 40 miles in excellent company. Al D. 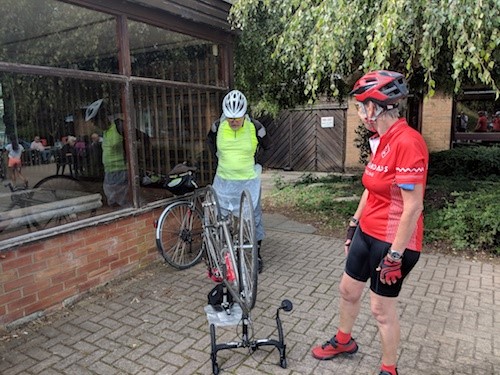 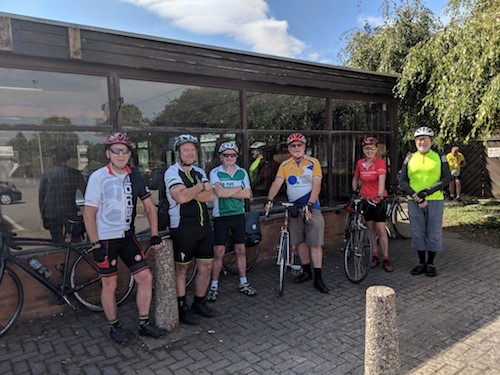 Janet/Helen’s Group
The sun came out and so did the cyclists -loads of them. It was lovely to see a 50/50 split of girls and boys in our group. The Greenway wasn’t too busy on the way out and we were soon climbing up towards Brimham Rocks. Eric had a quick strip off – the girls averting their eyes as he bared his chest! I tried to take a sneaky picture but the light was too bad. It was like riding through a hairdryer it was so warm. Over Dallowgill moor and down through Studley Royal we spotted a lone deer in the distance. The majority decided to have a coffee stop at Ripon Spa gardens – where the picture was taken and where the fast boys joined us- they had added an extra 5 miles via Greygarth. We chose the published route back and formed a bit of a peloton with the fast boys, introducing Zoe to Occaney – blink and you miss it. Lovely ride and thanks to Helen, Zoe, Debbie, Julie, Eric, Justin Tim, Tim and Mark. 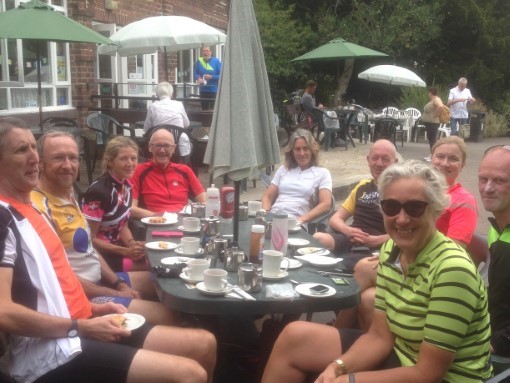 Monica’s Group
A lovely sunny morning at Hornbeam and loads of riders interested in the Medium Plus route to Dallowgill Moor. A large group of very fast boys departed and Helen and Janet offered to lead another sizable medium fast group. That left 11 riders with me and we set off down the Greenway to Ripley where Colin, Paul and Kevin joined us. On to Brimham via Hollybank Woods, Clint and Burnt Yates. At the junction – decision time – the track or road up to Dallowgill Moor. No hesitation for Colin who led the way up the track with Sally, James and Kevin on his wheel. The less intrepid of us opted for the road and we regrouped at the end of the trail. The peace was suddenly broken when an entourage of noisy trail bikes turned past us and blasted along the path creating clouds of dust. Luckily for both the track riders and our group photo we missed this just by a few minutes. Not long after James, Kevin and Colin left us to extend the route to Greygarth, while the rest of us carried onto to Fountains via Grantley and Aldfield. Everyone was more than ready for some welcome refreshments after all the hills. Paul, Sue, Charlie and Liz decided to go home via Watergate Road. Only 50% of the group left now – is that a judgement on the ride leader! Our cosy group of 7 steadily followed the published route home via Studley, Littlethorpe and Farnham. A really enjoyable day out with a very scenic route and good company and conversation. About 44 miles. Monica 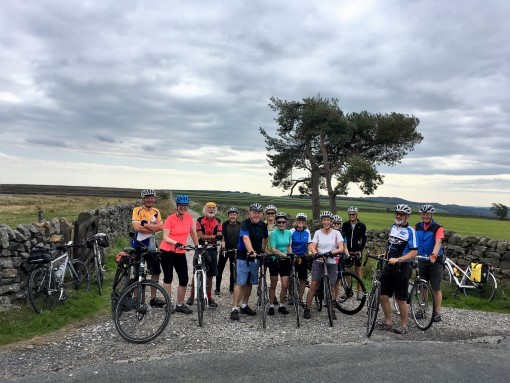 Fast Group
The sunshine and the return of holiday-makers were the probable reasons for a massive turnout for the medium plus rides this morning. It was not until we reached Ripley that a head count was possible for the faster group and at that stage it seemed that we were 19, although this rose to 21 by Burnt Yates, when 2 early victims of traffic setbacks caught up.
As the Greenway is about as popular as the Wheel Easy jersey with most of the faster riders, there was some resistance to using it, but, having heard rumours of a Sustrans headcount of cyclists taking place there, I managed to prevail and some later admitted that they had quite enjoyed the experience in the sunshine! There was no sign of Sustrans, but there is always the hope that our use of the route might have been registered in the form of complaints to the council about the large number of “⁎⁎⁎⁎⁎y cyclists” by some of the disgruntled walking tribe!
By Brimham we had naturally split into two groups and on Dallowgill Moor there was a decision by some to go on to Masham, while the remaining 11 did a shorter deviation to Greygarth, before heading on to Ripon. As usual, the pace was brisk and might have been even brisker had a slow tractor and trailer not managed to get in front of us in Risplith.
On the way into Spa Gardens we, mostly inadvertently, rubbed shoulders with some very high-ranking members of the Audax hierarchy, before occupying a large table outside from which a riveting game of bowls could be observed. The cheap and cheerful fare was good, as always, and set us up for the final leg, where, for various reasons, we shed riders so rapidly that by Knaresborough Hill there were only 3 of us remaining. D.W. 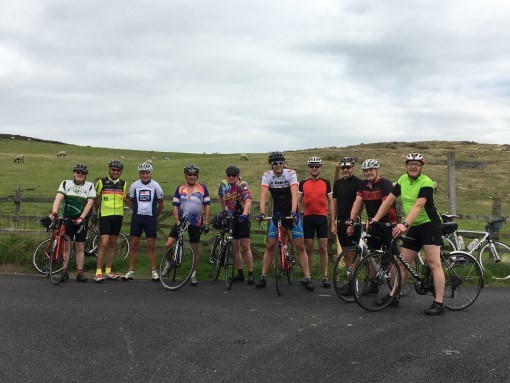 A phone call on Saturday to a yacht in the Baltic Ocean established that our nominated Sunday Leader could not make it. Later in the day a route was posted thanks to Malcolm’s alertness but unfortunately some may have missed it. Nevertheless, four met on Penny Pot Lane at 9am and cycled briskly to coffee in Grassington and onward to Buckden, over Cote de Cray and down beautiful Bishopdale.
Someone recommended a cafe at Swinithwaite where they ordered a full roast beef lunch (see photo) and consumed it whilst others waited enviously for their more modest choices to arrive. They never did, and a flapjack was the only compensation for 45 mins waiting.
After a fast dash on the main road we reached Masham and after Kirby Malzeard our team broke up progressively as we took direct routes back home.
I clocked 78 miles at 13.4 mph but those coming from Harrogate will have well exceeded that.
Temperature and conditions were perfect, views fantastic and I enjoyed riding in such elite & patient company. Peter R 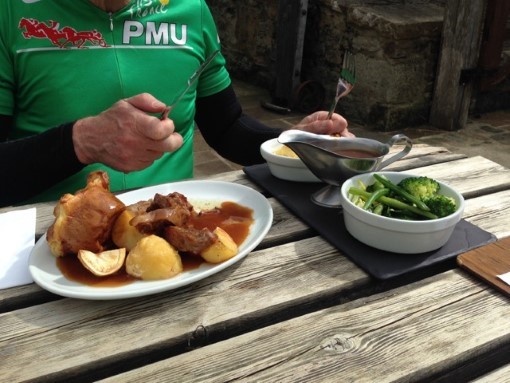 The Other Long Ride