Vile weather today – misty, cold, rainy, windy – meant that nobody apart from us and our stalwart chairman James (on the train and bus) turned up at Hornbeam this morning. Not quite true; a chap called John (?) did arrive a little late, but very decently said he would head off to join the EGs, who were rumored to be going out (well done, Old Chaps). Geraldine and I gratefully headed home. I still needed to clean the bikes, though.
0 miles, 0 metres of climb, average speed either 0 or infinity miles and hour (depending on what 0 divided by 0 is…). And no photo. Joe

The weather was most inconsiderate being one of persistent precipitations.
If it had been 5th November instead of 5th of December then bonfire night would have been a washout.
On passing Hornbeam Car Park it seemed rather quiet. A few years ago, when we all were somewhat younger, on a similar day as today I rode in to Hornbeam Car Park and said to Malcolm M, “there`s mad, very mad and Wheel Easy riders” so we had a laugh, but in those days we often waded knee deep on flooded roads, something we no longer do.
At Low Bridge the (EG RIDERS) were joined by John and Terry S down from Hornbeam. Then away we went, all kitted out in wet weather gear looking like fluorescent lemons with lights.
At Occaney (Dave Wonder-Wheels already having taken the men`s downhill cup), Dave P and Dave W turned left and across the ford which was rideable, in the past the only way across was pushing your bike while hanging on to the rail to prevent being swept away, so once again we can see that our drainage system has improved generally.
Dave`s P &W were there early at the cafe so we had our first coffee there and a chat with the supporters of our transport system, the rest of the EG`s headed to Boroughbridge to take their first coffee there. I believe we had 14 diners, 7 riders (all mad) and 7 (less mad but still qualified to be an EG).
The meal was good and the atmosphere /chat even better. All good things must come to an end and the less mad grinned as the mad set off in the persistent precipitations a constant downpour, however if it pours up, report sick.
We all made it in good order to Knaresborough where a kind Dave S gave a Dave P with an iffy front mech, a lift up to Harlow Hill (against the water flow), on the way we met Eric (we are not telling you where Eric) as it could be embarrassing for us, our excuse heavy traffic.
The friendship and humour seemed even better in such weather.
Best wishes to us all for Christmas and the New Year. Dave P 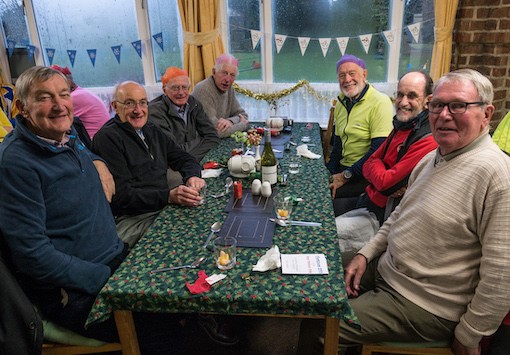 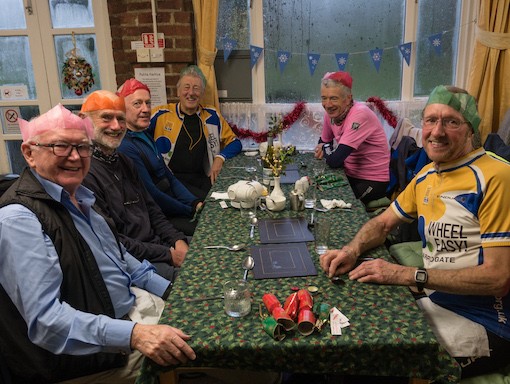 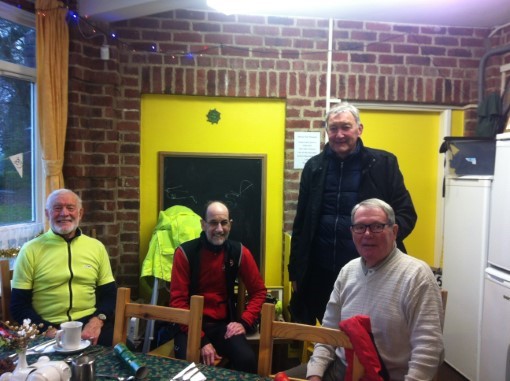 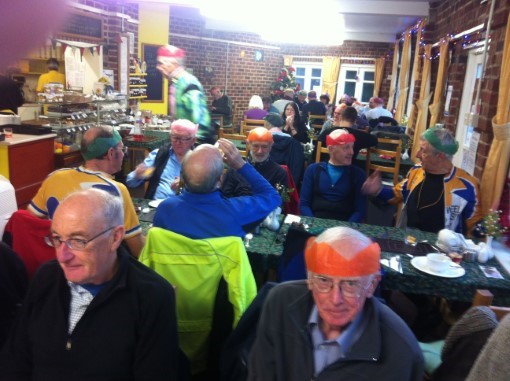