Well, what a beautiful morning! All doubts dispelled, eleven riders assembled in the top carpark ready to set off to Ripley via Follifoot, Little Ribston, Knaresborough, Scriven, Lingerfield, and Scotton BUT new rider, Fiona, had a problem. This was so sad because, despite the valiant attempts of David S and Dennis, the damage to the inner tube could not be repaired and Mr Fiona was contacted to retrieve his wife. All was well – thank you for your text confirming that you were not abandoned, Fiona. Good progress was made with occasional stops to take photos – clear skies made the countryside look quite stunning. Monica spotted a field full of seagulls – a gullery, perchance? Spofforth Castle made for a very attractive backdrop (not stop). We did split the group at Knaresborough and Dennis and David led the first team to Ripley, closely followed by the rest. The Ripley Cafe fare was much appreciated and enabled us to complete the ride.
25 miles of glorious winter sunshine and excellent company – thank you to everyone for agreeing to the extended version Sue D 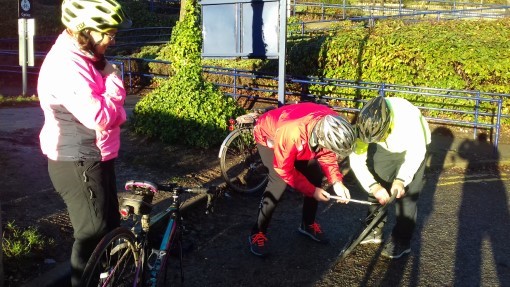 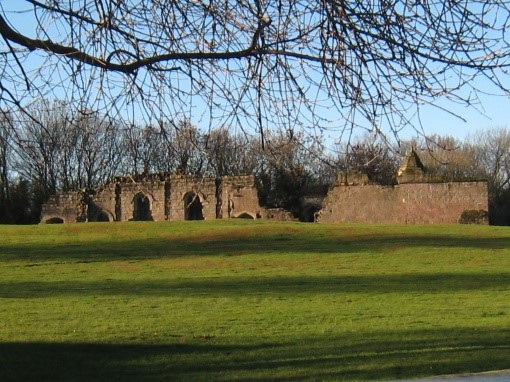 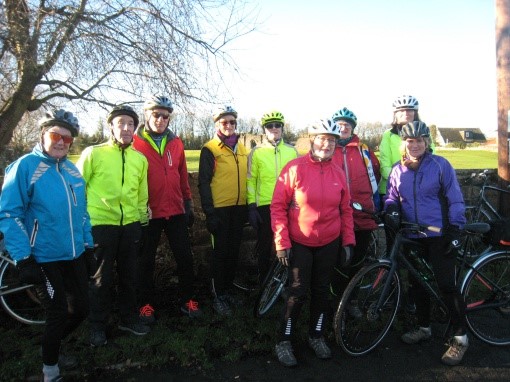 After the high winds and heavy rain of Saturday, an enthusiastic group of15 were keen to enjoy the sunshine. We set off in small groups, agreeing to meet up at Little Almscliffe. On the way we picked up Paul B, also keen to take advantage of the day. Chatting along the way, I was interested to find out that a number of people were keen to do this route for the challenge of the hills. Straightaway, we had to cope with a head on ‘breeze’ going up to Little Almscliffe. At this point, Martin and Fiona decided to head straight to Fewston Farm shop, omitting the Timble challenge. We chatted at Fewston car park, unaware that Paul B had stolen a march on us and kept going.! So, there he was waiting at the top! Here we were hailed by a cheery man offering us coffee and mince-pies. After a quick discussion 7 decided the lure of more sustenance at the Farm shop was too great. The remainder of us went into the village hall [really an early 20century library] and found ourselves surrounded by second hand books! It was fascinating. Most of us just had to buy something. It was agreed that the most pleasant route home was along the Menwith ridge via the listening station. This allowed us to reconvene with the rest of the group at the Farm Shop. Steve Wright, out for the first time for a while, was keen to do a longer ride. So, he, Helen, Liz F and Brian left us to do the Stripe Lane, Brimham circuit. The rest of us had a beautiful ride, wind assisted along Menwith ridge before dropping down towards Birstwith- where Dave peeled off. Still in sunshine, we continued through Birstwith to Hollybank Woods, Ripley and the Greenway. It was a perfect ride for a winter’s day. Thanks to all for their friendly company. Alison N 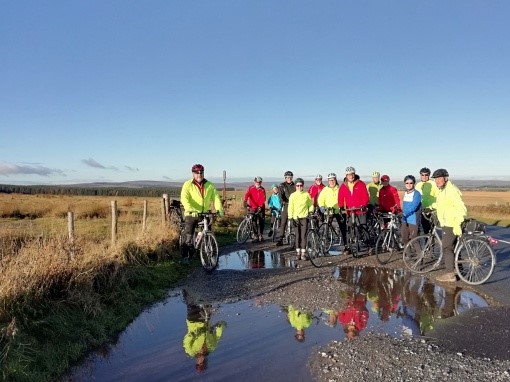 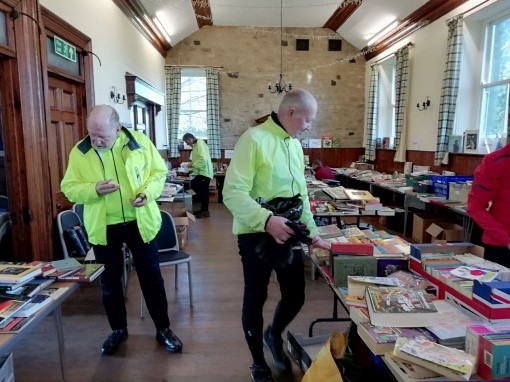 Medium Ride – Plus a Bit

After about two lovely hours with Alison and others on the Medium ride, 4 of us formed a breakaway group to get even more hills in. Liz F, Helen, Brian and I left the others after the listening station and headed down Day Lane for Darley. Yorkshire was looking its best today – sunny and clear as forecast. Another great day if you’re a photographer. You may see the White Horse in the background of the photo.
From there we went over the toll bridge and up Stripe Lane past Brimham Rocks for everyone’s favourite run down past Warren Forest to Careless House Farm, then to Ripley and home via the Greenway which was full of hikers, most of them friendly. Back by 2.30 having done 38.5 miles and climbed 876 metres. This was my first ride in 4 weeks and well worth coming out of retirement for. Thanks to all.
Steve W 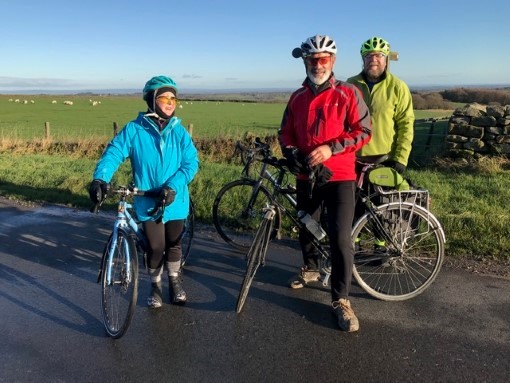 There was a good turn out this morning, blue sky, sunshine and a little chilly. The medium plus brisk group set off leaving a group of 8 riders ready to go. I had found out the café at the garden centre in Askern Richard was open until 2.30pm and suggested that we stopped there because there was a Dickensian Christmas Market in Wetherby and the cafes may be full. A nice steady ride out to Spofforth, Cowthorpe, Marston Moor enjoying the winter sun and on to the café stop, they do serve a good portion of cake here! The return was through Bilbrough, I overshot the turn off, so a quick turn around and map check before cycling on to Healaugh and Wighill, the farmer had been hedge trimming, so lots of debris on the road. Mike stopped off at Healaugh to look at a tomb stone of a family descendant in the Church and said he would catch the rest of the group up. At Wighill I got a front wheel puncture, looked like a thorn was the problem and Mike then caught us up, he had also seen another cyclist with a puncture who had also been on the same road. Through Wetherby to Sicklinghall and Kirkby Overblow with the clouds now rolling in and a slight chill in the air and back to Harrogate. A good ride in some good weather for a change! 45miles.
Chris R. 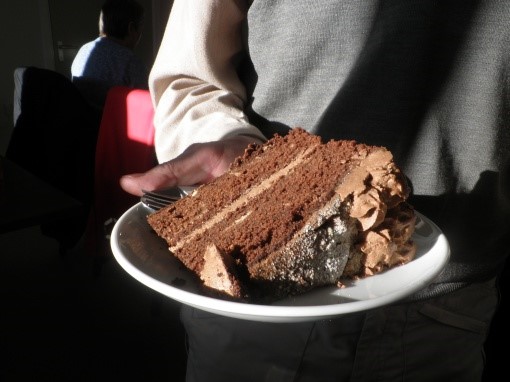 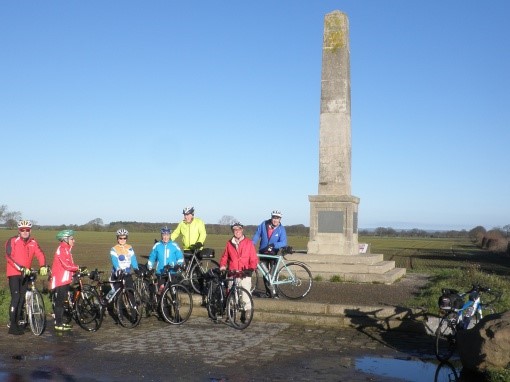 A wonderful 45 miles in glorious winter sunshine. Season’s greetings from the brisk group. Helen B 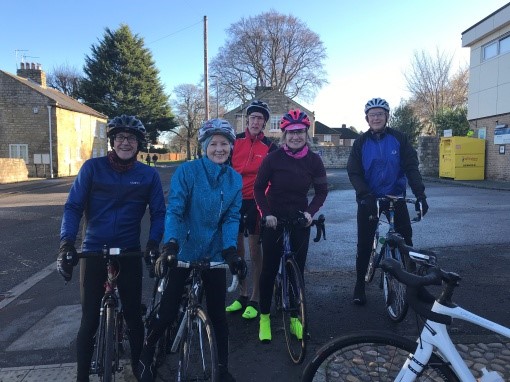 On a Sunny morning people gather in Hornbeam Park all in wonderfully bright tops a sea of colour quite a dazzling spectacle for the unsuspecting overnighters in the Premier Inn. Everyone departing in different directions for a day’s cycling with the faster group leaving via Rudding Park looking to put an added bit into York soon past Spofforth and its ancient castle nestling up to the old railway, Grant left us at Little Ribston for family stuff involving a pub!
Picking up the pace on Ox close lane (as a visit to cycling heaven was on the cards) we were soon past Cowthorpe once home to the enormous Cowthorpe Oak tree which became so well known that J M W Turner painted it…the tree finally dying in the 1950s. On we went with Tockwith and Marston Moor soon passed reaching Askham Richard we turned left and headed along York Road to Askham Bryan. After negotiating the busy roundabout we were heading along the A64 cycle path and into sunny York via the racecourse looking at the river from the Millennium bridge which was full to bursting point we reached everyone’s favourite, cycle heaven’s cafe sharing it with another group from Wakefield area by the name of Calder Clarion which contained two people I knew who I met on holiday down in the S of France,.. it’s a small world!
So, all refreshed on coffee and tasty tucker we headed out to Askham Bryan but adding a different twist by looping through the sleepy hamlets of Bilbrough, Catterton and Healaugh, once home to a monk called Gilbert from Marmoutier who built a hermitage here which lasted till 1535 when Henry 8th and Dissolution arrived…as to what happened to the monk…is anyone’s guess. From Healaugh we soon arrived at Wighill turning right for Thorp Arch and on to Wetherby busy with its Christmas fair and carols in the market place, here I split from the rest of the group who went on to Sicklinghall and Kirby Overblow whilst I headed back to Knaresborough. A good day’s riding with a few dirty bikes needing a clean upon reaching home.
No pics!! Tony

With no designated ride leader, we resorted to the usual default ride of going to Masham. After meandering through the streets of Harrogate we eventually joined the Greenway via the cycle path past ASDA. We progressed quickly from there to Ripley and onto Masham via the usual route i.e. Fountains, Winksley, and Grewelthorpe. The return route to Harrogate was the trusty High Burton, Snape, Wath, Ripon and Knaresborough. On the return journey Trefor suffered a puncture near Wath. The repair was greatly assisted by a kind resident who supplied a pair of tweezers to extract the thorn from the tyre. About 55 miles in bright Winter sunshine and a tailwind on the return journey. PCJ 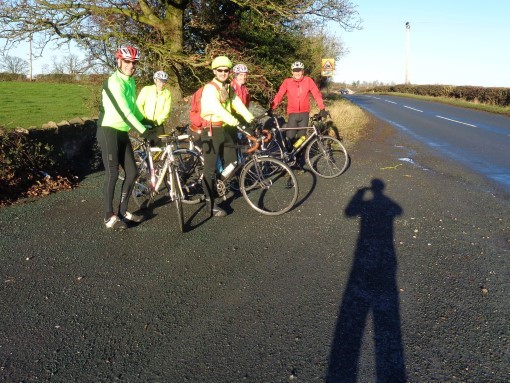 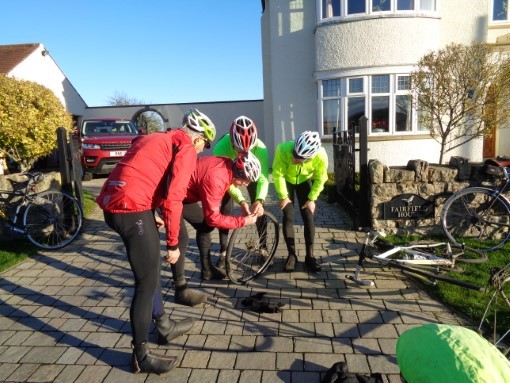