Jill call me Owain Jackson and Accuweather both said no rain ‘til 2 o’clock this afternoon….how wrong they were. Thankfully all the short ride choosers were up for a short ride with maximum effort. So short and uppy downy it was…five set off to meet Jane down the Greenway and continued through Ripley up to Hollybank and Clint Bank. It mizzled from Hornbeam onwards…..by the time we got to Birstwith it was actually doing real raining. So, taking a very deep breath or two we attacked one of my least favourite, least used hills out of Birstwith to Clapham Green. IT WAS STILL SNEAKILY HILLISH OR PERHAPS AN E SHOULD REPLACE THE FIRST I. But the downhill reward into Hampsthwaite was perfect and as we locked our bikes amongst several other cycles heavier rain gave us a further dousing.
The cheese scones and the wholemeal teacake were excellent (high praise indeed from the short slows) as were the drinks. Having once more sorted out the world problem……bike light inventions…accelerator lights?…. Tobius and Tobins part in religious tales… the whereabouts of Guadeloupe ….discussed medicine in particular and general….and met an ex Wheel Easy lady who swapped cycling for flying a plane, in near sunshine we sped, well slogged up yet another up to Killinghall, Knox Lane and home.
Not many miles 20ish, lots of exercise mental and physical… a grand morning out Gommit.CG

After all the wet weather and a wet forecast for Sunday, the weather was quite warm for the start of December and dry. There were 10 riders ready to set off, I had been talking to a cyclist on Saturday who said the bridal path from Copgrove was muddy and slippery so decided to alter the route slightly. We regrouped at Low Bridge and picked up 2 riders in Knaresborough so now 12 cycled towards Farnham, on to Staveley and Minskip avoiding the bridal path, a rider left here for a shorter route back and another left at Minskip, the drizzle had now started and it was getting dull. Then on to Aldborough and Boroughbridge stopping at ‘Plenty’ for coffee. As we left, riders from the Medium Plus were also stopping, the sun was starting to come out as we cycled to Skelton and Ripon, but the drizzle started again as we went through Bishop Monkton. At Farnham two riders left to go back to Knaresborough, we carried on to Lingerfield; as the sun came out again it was suggested that we carried on to Scotton and Ripley returning along the Greenway. Another two riders left at Lingerfield to go home in Knaresborough and after agreeing six now carried on to Ripley, enjoying the view of a rainbow and sunshine again, then the Greenway back to Harrogate and just before the bridge I got a puncture, only a 10 min. walk home. 41 miles. Chris R. 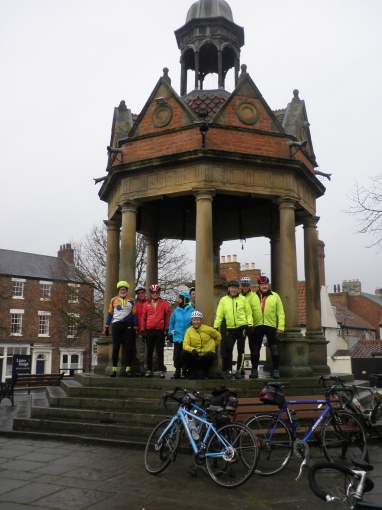 It was a bit of a dreary morning at Hornbeam but the weather forecast was optimistic. However, as we made our way towards Hampsthwaite in rather heavy drizzle, we were starting to wonder If that was right. By the time we were climbing the hills towards Markington, the skies were clearing and we all felt drier and warmer. At Bishop Monkton Gia’s suggestion of stopping at Oliver’s Pantry in Ripon was appealing and so we deviated from the published route to go there. It is indeed a very nice cafe, with tasty food and good service. James Grimshaw and Malcolm had arranged to meet us there and enhanced the convivial chat. Most of the group decided to ride onto Boroughbridge and there was some lovely afternoon sunshine and dramatic skies to enjoy on the way. It was decision time at Great Ouseburn – did we follow the rest of the published route to Whixley and beyond or deviate and take a quicker route home. Deviation was voted for again as time was getting on and the Arkendale way had more appeal. We said goodbye at the top of Knaresborough hill as some were going home via Bogs Lane and I heard Kevin say to Debby that they should go via the Starbeck Santa. Debby may have had enough of Santas though as she unknowingly got very stuck behind the Santa race in Wetherby this morning. We were all amused at her great excuse for arriving late at Hornbeam!
A very pleasant ride in good company and thanks to Justin for his usual faithful role as back marker.
Monica W 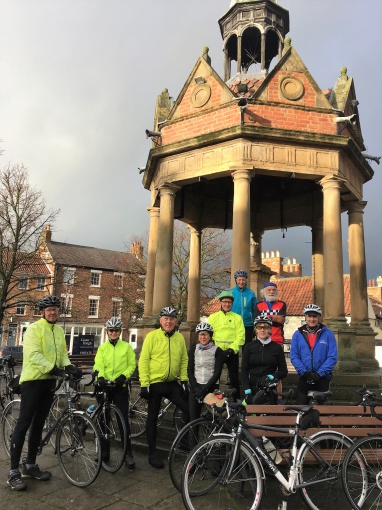 We started with 8 riders which swelled to 11 or so when the fast boys joined us as far as Hampsthwaite. We said goodbye to Mark at Bishop Monkton and pressed on the rain to Plenty at Boroughbridge where we displaced the medium group as it was rather busy. Ordering seemed to take for ever but this turned out to be quick compared to the time taken to bring out toasted teacakes and scones and then even longer for our drinks. They did apologise and said they were training new staff but we were there for about an hour!! We set off again and even enjoyed a short burst of sunshine before encountering a gale force head wind. We all felt very tired by the time we got to Spofforth and started counting down the last 4 hills- the show ground hill just about finished me off! My Strava said 49.2 miles and 2400 feet of climbing.
Thanks to all for a great ride. Julie E. 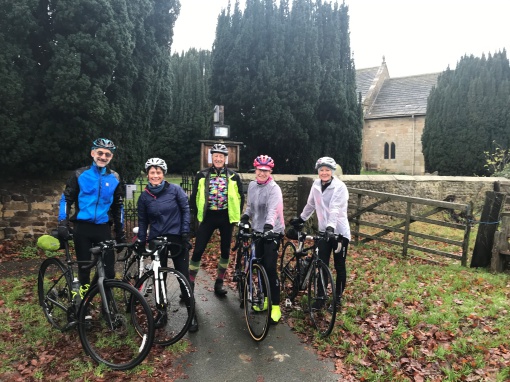 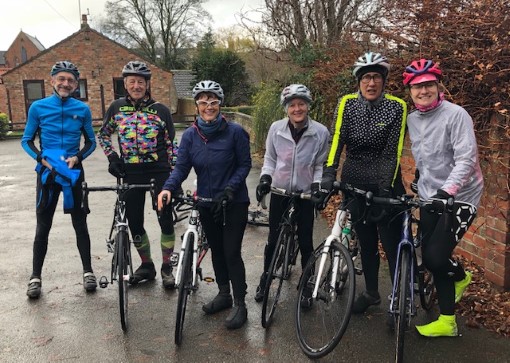 Only 3 men today for the medium plus plus.
Forecast was for mist which was actually rain so another wet ride.
We joined the main group to get ourselves warmed up and drifted off the front around Clint Bank.
Decided it was too early for lunch in Boroughbridge so headed for the log burner at Tancred farm, making sure we didn’t make any noise as we went through the Dunsforths
It was hard to leave but I had jobs to do at home.
Martyn left us so the 2 battled into a nasty headwind to complete an enjoyable 48 mile ride despite the weather. Thanks to Martyn and Mark C. Paul B
Long Ride
Eight riders set off on the first long ride using the new Winter format – basically the medium+ route with a few tweaks. There will be a note in the next newsletter to explain the rationale behind this format. The ride went well and the return to Hornbeam was at 2:30, nicely in advance of the forthcoming dusky gloom.

Today was another damp ride but at least it was warmer than last Sunday’s long ride! Some plus and some minus points:
– the onset of rain which lasted virtually to Boroughbridge.
– another puncture for me as we entered Penny Pot Lane. Thanks to Tim for some gloves!
– catching one of the Medium+ groups on the climb up to Clint. I think we subconsciously put the hammer down…….sorry!
– the efforts put in by the Plenty cafe at Boroughbridge to serve 2 ride groups. We overloaded them!
– the irritating headwind for most of the way back.
– and, finally, my tired legs until I found my energy bar!
John H