The weather forecast was “interesting” and it certainly turned out to be.

Though short on numbers we still had 10 riders at Low Bridge and whilst deciding or being indecisive on our destination we exchanged greetings with another Wheel-Easy group at Low Bridge.

This was all Male as well, so we had 100% Wheel-Easy males at Low Bridge, quite often on Wheel-Easy rides male members are in the minority, “votes for men” !!.

First cafe stop was to be Spa Gardens Cafe in Ripon and off we went at a leisurely pace after crossing the ford at Occaney remnants of the “A” team smelt the coffee and up went the pace and they were soon out of sight.

The remnants took a more leisurely pace with lots of chat, unfortunately at Bishop Monkton, Theo became unwell and was unable to continue and very sensibly rested with us all around him. Getting Theo home was the problem, with other halves either being out or non drivers. The problem was solved by Chris who rang for his wife Karen who arrived at Bishop Monkton in no time in a car with a state of the art bike rack on its roof.

Many thanks to Chris and Karen from Wheel-Easy but especially from the EG`s.

Bill, Chris, Dave P and Norman then headed for Spa Gardens cafe, the others had already been informed by Dan who had been asked to go on to tell them why we would be late.

After we had had refreshment the “A” team went on a Dave Watson “special” its his area.

Bill, Dave P and Norman then headed for Bishop Monkton, Markington, Ripley and home in the windy wet.

Chris went from Ripon to get some extra miles in, hope the weather was kind to you, you and your Mrs were stars.

Regarding Theo and how he is, we will leave this in the hands of Norman who will keep us informed.

Five ladies accompanied by Surjohn set off for a quick poddle.  Welcome to visitor Patricia…..nice to see you again Sandra, Jane, Monica and Surjohn. We gently went to Kirby Overblow, Sicklinghall and Wetherby, where John left us.  After coffees, chatting, toasted tea cakes, teas and lemon with hot water Monica left us for an extra loop and we headed home along the Harland Way through Spofforth into even more wind and a raging seemingly out of control bus, having completed a gentle 21 miles.CG 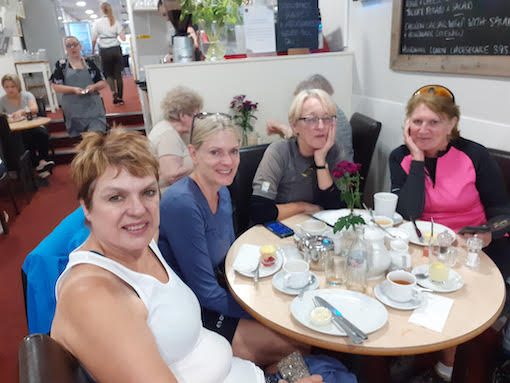 Another good turnout of Wanderers this morning, the faster group was soon off and the rest split into 2 groups of 6 heading out through Hornbeam and on to Follifoot. Here there was a problem, Margaret could not release her foot from one of her pedals, after a bit of twisting and pulling her foot was released to find that a cleat screw had come out, the cleat had twisted and jammed into the pedal. It was decided to tighten the other screw up so that the cleat could be straight, Mike looked like a professional farrier and then we were off out to Spofforth where Al was waiting for us. We thought the cycle path might be muddy so made a detour to North Deaton and on to Wetherby. Here, Margaret managed to get a free screw from a nice man in the cycle shop and her cleat was now sorted. The wind seamed to be getting up on the way to the coffee stop at Tancred, a rider left as he had to get back early and we met up with faster group. Black clouds were in the distance and now we were cycling in a headwind on the way back through Great Ouseburn towards Arkendale and Harrogate. The rain did come as we arrived in Harrogate. 36miles Chris R.
The faster group of 6 divided at Wetherby, with 3 of us going on an extended southern loop – Linton, Collingham, Bramham, Boston Spa – before re-joining the main group at the café stop. 50 miles, 1600′ climb, 13.7mph. Allen B. 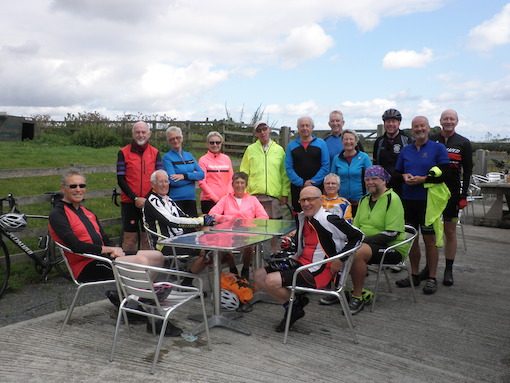 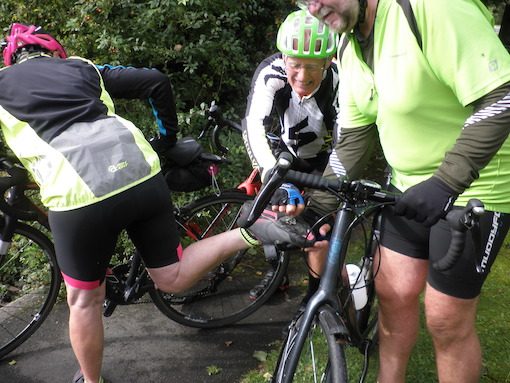 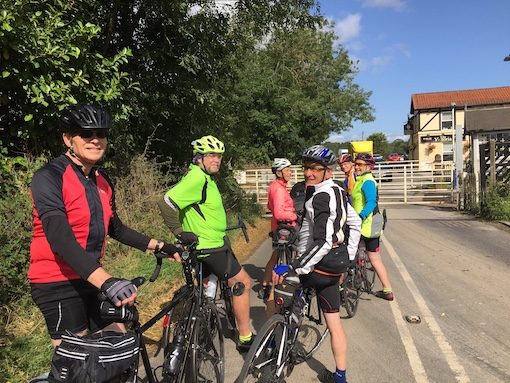 Great to see Colin out on his bike again after a 5 week lay off. Our route today was one Jill had done recently and included a new cafe stop at Spilmans Farm Shop at Sessay. As notional leader and allowing for some early returners and on account of the prevailing wind we turned the ride round and for most of the ride to Boroughbridge and Sessay was wind assisted. I made one early error which added about 3 miles but it did avoid Scarah Bank and climbing Cut Throat Lane was not too bad all. The route then took us to Markington and Bishop Monkton and Roecliffe. We stopped at Bean in Boroughbridge for a late coffee and snack break while it gently rained outside. Sue, John, Kevin and Colin returned home leaving Jill, Paul, Alan, Sarah and Gia to cycle a route we rarely do this way round. Out to Cundall, Asenby and to the farm shop at Sessay. excellent food and welcome and then the long slog home mostly in to the wind. Thanks Alan, for taking the brunt of it. A great ride a new cafe for most of us and home before we got too wet. 56 miles. Gia 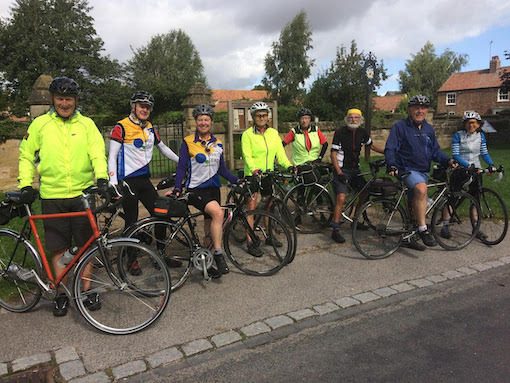