El Butler as ever led a superb ride with ten lucky riders. The group went to Boroughbridge via Bishop Monkton and straight home after a cafe stop unusually including El Butler in the old cafe in the Market place. 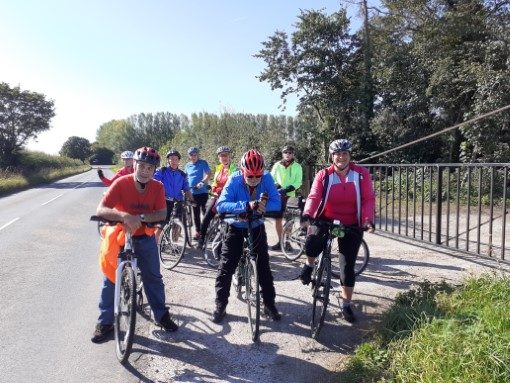 Lovely morning at Hornbeam, no wind, cool, but plenty of sun and eight takers for the Medium outing. No official leader, but Marwood took the initiative and did the marshalling. Up the Greenway to Ripley, picking up another two to make a band of 10. We were 30% electric… just the thing for the hills to come. First warm up through Hollybank Wood and Clint, then a cool run down to Birstwith and on to the Hartwith toll bridge and up Stripe Lane. Getting warmer, there were a few wardrobe adjustments at the top. Over past Brimham, (lost one early returner down Rabbit Hill farm) to Risplith and G&T’s cafe via Sawley Moor Lane. Warm enough to sit outside, the almond slice was favourite today. Off again homewards, with big efforts up Low Gate Lane. Speedy to Ripley where we started to peel off for various homes. A grand day out, about 33 miles, sunny and dry. Brian N 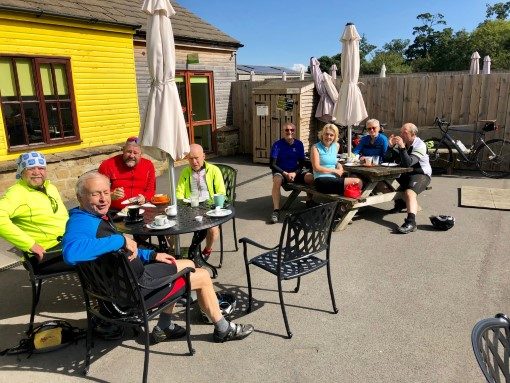 This was definitely the day for every man and his bike to be out and about. Dare I say it was perfect cycling weather? There were nine riders in our group- apologies to the three riders that got caught at the first traffic lights coming out of Hornbeam Park – we did wait but PCJ told me that you were going to ride together and not to bother waiting. Armed with my new Garmin (with route maps) we swiftly made our way to Easingwold where we decided to take the EG route towards Coxwold- turning left at the roundabout and then forking right. We all agreed that this was a lovely alternative to get to Coxwold and Allen may even change the route on the website. We arrived at the Coxwold tea rooms in good time and were able to sit in their lovely gardens. Suitably refreshed we set off back home towards Carlton Husthwaite, Boroughbridge and the dreaded Knaresborough Hill. Helen B did some sterling work on the front but we were all able to stay together as a group. PCJ left us as did Allen in Knaresborough. My Garmin recorded two rides?? However, the ride was approx. 52 miles at 16mph. No idea how many calories but I’m still having a large glass of wine! Lovely ride, great company- thank you. Janet G 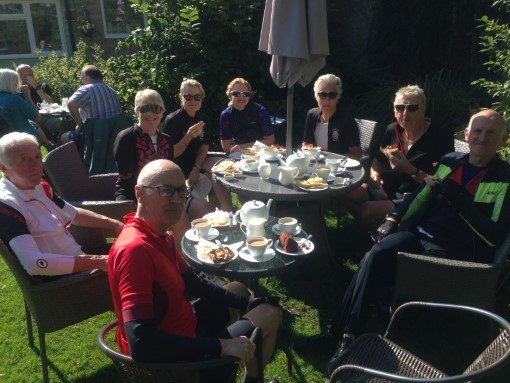 The sun was out with a little autumn chill as we were ready for setting off from Hornbeam. The faster group left first leaving 7 riders to follow. The chill was soon gone as we made our way to Farnham, picking up Dave (a guest) at Arkendale who was joining us to Easingwold, then on to York. Then through Great Ouseburn having waited our turn to cross the Aldwark bridge in a queue of cars. We stopped for coffee at Easingwold where Gia and Paul left us to make their own way back. By now it was very warm as we made our way to Coxwold with nice views of the surrounding countryside and the White Horse. We made our way back towards Boroughbridge and Knaresborough, traffic in general seemed to be very quiet today! A very good ride in warm autumnal weather. Chris R. 55miles. 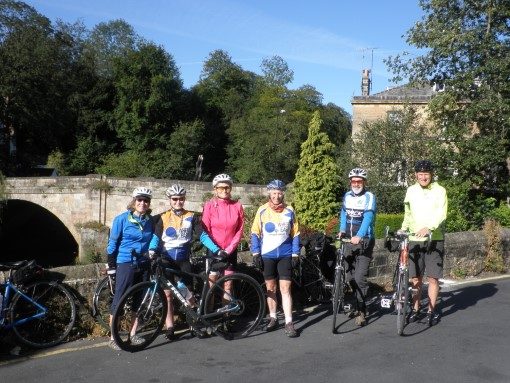 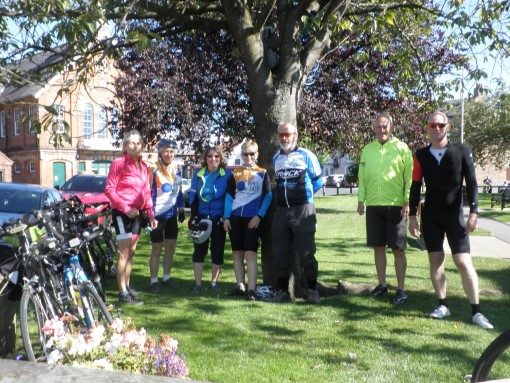 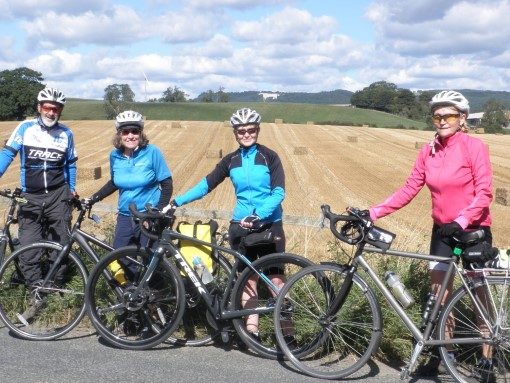 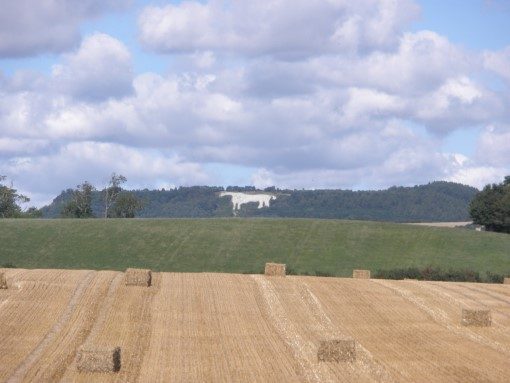 A coolish start this morning meant arm warmers and a couple of rather splendid WE Gilets were on show as the fast group was joined by usual long riders Richard and James to bolster our numbers to eight. Making good progress and benefitting from slipstreaming three mobility scooters out for a ride in the country we were soon in Easingwold by the usual route where we opted to head for Coxwold via Husthwaite. Brunch was in the garden at the Tearooms in glorious sunshine where we were joined by the other Medium Plus group and quite a number of wasps. As is often the case at this time of year, thoughts soon turn to future challenges and whilst we always think we will be fitter next year Mark T still struggled to find any takers for the mighty Fred Whitton sportive. With layers removed and benefitting from a caffeine boost it was a fast ride back with Mark C’s big turn leading to a break in the group. After reforming at Thornton Bridge we continued as a group at a fast pace to Boroughbridge. Having cycled in today I left the group at Boroughbridge leaving the guys to cycle back to Harrogate. Splendid weather conditions and good company but not much chance to chat on the way back. 52 miles @ 17.2mph and 2100 ft of climbing. Martyn B

After completing my Sunday morning church commitments, I arrived at Hornbeam just after 9.30, with the various groups assembled in their designated car parks. There were no ‘long riders’ in the bottom carpark, but I could see the tail end of one group exiting onto Hornbeam Park Avenue. I overtook the Medium Plus Group 2, and caught up the Medium Plus Group 1 at Woodlands traffic lights, where Rob M decided to join me on the long ride. Phil and Glyn also decided to join us for a while, but neither were up to a 100-mile long ride. The last time I cycled to Malton was 2 years ago, I had to be rescued by car, and that was the start of 2 years of health issues which now thankfully seem to be behind me, so today’s ride was an opportunity to return to Malton in much happier circumstances. Phil and Glyn have both had more than their fair shares of injuries and accidents during that time too, and this was almost certainly the first time that we had cycled together for over 2years. It was great to be back together again, guys!
The weather was magnificent. Yes, there was an autumn nip in the air to start with, but the sunshine and blue skies resulted in jackets being shed, so we were in shorts and short-sleeved shirts for most of the day. We stopped for an earlyish coffee at Spilman’s Stone Barn Cafe at Sessay, and opted to sit out in the courtyard and bask in the sunshine. It was just too nice to rush, so we were there for much longer than our planned mileage allowed. But, hey-ho, this could be the last time we have such good weather this year, so let’s appreciate every minute of it! As we went through Coxwold, the Medium Plus Group 1 were just leaving the Tea Rooms, so we paused for a few minutes chat before leaving in opposite directions. After taking the delightful gated road at Newburgh Grange, it was time for Phil and Glyn to leave us and make their way to Easingwold. Rob and I continued on through the Howardian Hills, frequently stopping to enjoy the spectacular long-range views in all directions.
‘Welcome to Malton, food capital of Yorkshire’, said the first sign awe crossed the town boundary. ‘Food Festival, 7 & 8 September said the second sign immediately after. This could be a very good lunch stop! All the roads into the Market Square were blocked off, so we had to walk our bikes in from the main road. The Market Square was a picture; smells of barbequed food & spices filled the air. We were spoilt for choice with the array of street food available. To the background of songs from Oasis and George Ezra from the live musicians, we had a very leisurely lunch, and thought the long ride should try to come to the Malton Food Festival each year, but perhaps not spend quite so much time there as we did.
It was after 3pm when we resumed, and we weren’t yet at the half-waypoint of the ride, so we knew we would be late back to Harrogate. Indeed, we were – It was almost 7.30pm as we crossed The Stray. The ride was billed as 97 miles, add the extra to and from home, and I completed 100miles exactly. Rob had cycled in from Leeds, so he was already on a higher mileage. He refused my offers of a lift home, and finished with118.2 miles including a climb up Pool Bank to finish. What a star! Great ride, great day, great company. Eric 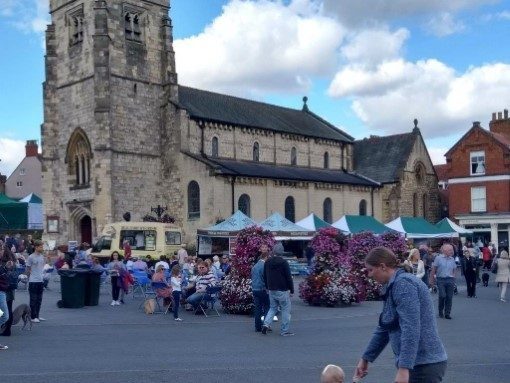 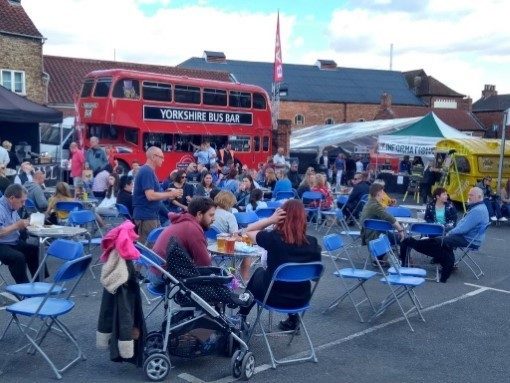