Nine brave souls took the plunge and joined me on my first attempt at leading a ride this year, possibly curious to see if I can still find my way to Sophie’s. As well as the wonderful regulars who made sure we didn’t get lost, our number included Huby Dave on only his second club ride of the year, in training for an imminent cycling holiday in Umbria, and for whom a bonus today was that our route included some lanes he’d not cycled before.
We took the usual route to Beckwithshaw and Little Alms Cliff where we had our photo stop. Sue T with other commitments turned around at this point, the rest of us continuing to the Sun Inn and along Pennypot Lane till we turned down to Kettlesing and along the lovely road through Tang. I took my planned right fork to go past Birstwith Hall but fortunately everyone else thought this was a really bad idea and took the left up to Clapham Green. When I eventually got there I had to agree, a much better option. Dennis, Peter and Paul carried on at Sophie’s, so just Sue D, Caroline, Dave, Monica and I stopped together with Sarah E who had, for the second successive week, met up with Wheel Easy by chance while out on her bike. (We must keep meeting like this!)
By the time we’d had our leisurely coffee and chat the clouds had dispersed, the sun was out and the temperature perfect. Caroline, Dave and I headed up Clint Bank to Hollybank and home along the Greenway, the others took the shorter route up Hollins Lane. Thank you to all for your company and a very pleasant ride. 25 miles, just about my limit without a motor nowadays. Great training ride though! Malcolm 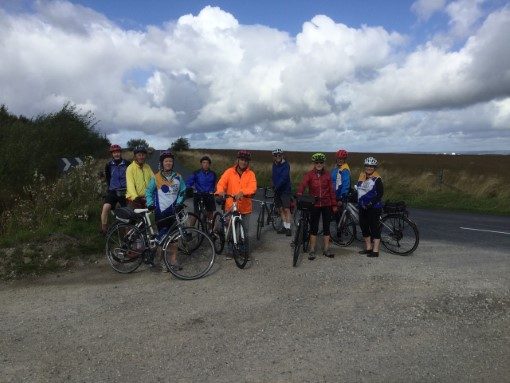 Fifteen set off on a “fairly flat” ride to Tadcaster in pretty fine, cool weather. We took the usual route down to Sicklinghall and then turned right down to Linton, across the bridge and to Collinham where we met the first couple of hills on Jewett Lane.

After a welcome freewheel down to Bramham, we decided to vary the route at Mike’s suggestion and looped around the site of the Battle of Bramham Moor, which as everybody knows, was the final battle of the Percy Rebellion (no, me neither), then headed for Newton Kyme and along the new very smooth cycling path and across the restored railway bridge over the Wharfe. Unfortunately the tarmac ended immediately after the bridge> Hopefully it’ll eventually be linked up with the Railway Path.

This took us directly into Thorpe Arch Trading Estate where we stopped at the cafe for coffee. Then on to Wetherby, up the Harland Way to Spofforth and home. A pleasant ride in much better weather than forecast. About 37 miles. Al D 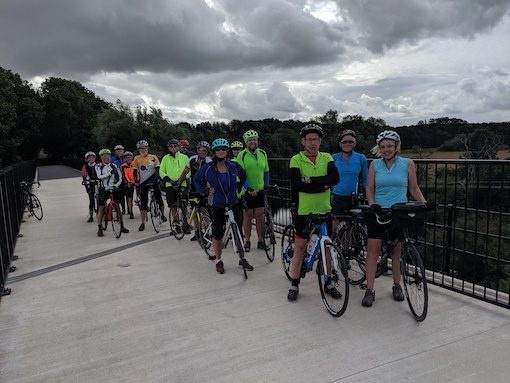 After announcements, we ended up with 8 people for the Medium Plus ride. Not usually doing the Hornbeam to Greenway leg myself, I co-opted assistant leader Mark for that leg. I also asked the group to remind me to get photos of crossing points for some work with NYCC. Paul joined us at Ripley, and we headed for the hills! Visibility was very good; we stopped to admire the views at Brimham (photo below). 3 people took to the rough, but flatter route from the B6265 to Dallow Moor, while the rest of us descended to Fell Beck then climbed back up the moor.
I have just had a look, and note that Google street view van has been on that track if you want to have a look (2009 Images)! The gentle descent to Grantley was glorious – supported by a full tail wind. In Grantley a group decision to use the RUPP to cut the corner off was a good one, nice if a bit overgrown in places. Coffee stop at Fountains in the sunshine, from where 3 headed the more direct route back via Ripley, and the rest of us through the deer park, Littelthorpe, etc – not forgetting the last crossing point photo. I took some stick for gloating that at the top of the hill after Occaney, it was my last of the day. I abandoned leadership duty and headed straight home in Knaresborough, made it in just before a rain shower (no doubt I’ll get more stick for saying that). About 45miles, just over 2000′ climb 11.2mph. Allen B. 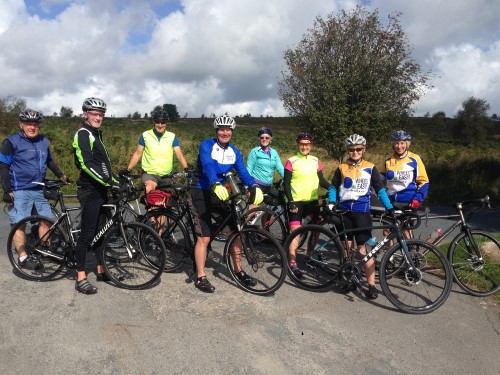 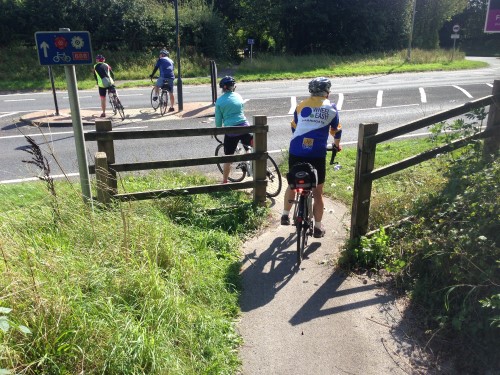 The seven musketeers set off from Hornbeam on a slightly chilly morning destination Dallow Gill Moor. All plain sailing, indeed it was a good day for it as the strength of the wind was quite strong, still, it is autumn.  Darcy said he had diamonds in his legs today as we flew along, personally I think it may have been the whiff of recreational drugs going past Brimham Rocks, or at least that’s what I was told.
Wind was that strong it was a tough cycle down the hill for the turning right to Dallow Gill, but once on the tops the wind was behind us so a nice run towards Kirkby Malzeard only halted by a slow-moving farm vehicle for part of the way.  In Ripon, Mark C and Martin left us to return to base so Mark T Diamond Legs Darcy, Grant, Fred and David joined the cycling masses in Oliver’s. Despite being busy service was still good, although Darcy (being Darcy) didn’t get his full order. Again.
Slight change to the home route in that we went back via Markington just to add few more lumps and the home via a not as busy as expected Greenway, which had a few young cyclists on today. Thank you Malcolm. Many thanks to fellow riders for a good ride with a bit of everything terrain wise.
45 miles 3200ft climbing Mark T

Six set off on the Long Ride to Kettlewell. Once we had left the environs of Harrogate we were faced with a very strong, gusty westerly wind. After cycling 45 gruelling miles, into what seemed a continuous headwind, we arrived a Kettlewell. Although the return journey seemed easier with a tailwind at times we had to contended with sudden downpours, one of which forced us to take shelter near Grassington waiting for it to blow over. Probably one of the most testing rides for a long time, Autumn can only get better surely. PCJ 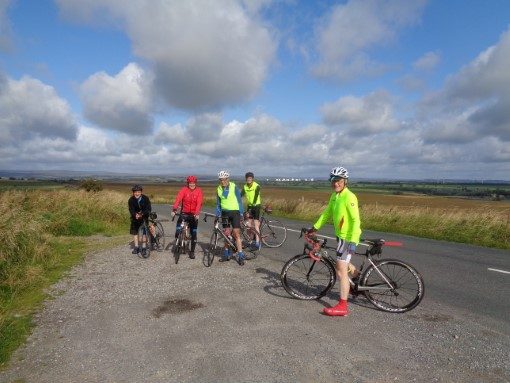 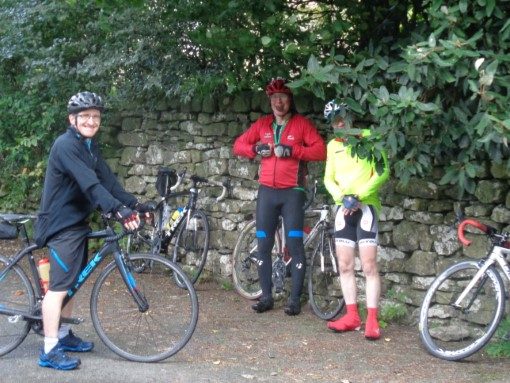 The first group (Rob, Chris, Kate, Terry, Tim, Tim and Tim) set off at 7:30 from what was a pleasant but chilly morning however we soon warmed up as we zigzagged along to Cycle Heaven in York and then out via Stamford Bridge and onto Pocklington. The jackets came out a couple of times along the way but by the time they were on the shower was all over. And then superb riding along and up the valley to Millington and the one largish climb to Millington Woods with beautiful views along the way. Just past Burton Agnes our luck changed as a strengthening wind blew in a heavy shower that saw the whole group (plus 3 other Brid bound riders) sheltering under the only road-side trees available. Five minutes later it was all over and by the time we romped into a completely dry Brid it was blue skies again. Rob had cycled from Leeds to Hornbeam and with perfect timing he managed to clock 100 miles as he cruised along the Brid seafront. Special mention to both Kate and Top Tim as it was their longest ride to date.

Following the first group’s departure at 7:30 on a cool, sunny Sunday morning, six intrepid riders (Zöe, Michael, Janet, Helen, Eric and Vince) formed up bright and early (well, early anyway) and set off on time at 7:45, bound initially for coffee and an RV with the first group at Cycle Heaven in York. Whilst the sun was shining, we were still glad of our long sleeves to keep off the chill until the day warmed up, but it soon did and we headed up past Rudding Park and the only climb of the morning and on to Spofforth and North Deighton. Sleeves and jackets were gradually discarded and we sped past Tockwith on schedule, providing the opportunity for some light ribbing for the group leader’s pocket spreadsheet. At Long Marston we joined the slightly busier Wetherby to York road and soon crossed the York ring road, from which we picked our way to the Orbital cycle path, new to most and very pleasant. We met the first group at Cycle Heaven, who had opened early just for us thanks to Tall Tim’s excellent negotiating skills, and we did our best to contribute to their profits in the cafe.

Fully refreshed, we pushed on along quiet roads through Stamford Bridge and Pocklington, followed by the delightful section up through the Wolds and a long downhill run to Tibthorpe. Before long we had reached Hutton Cranswick for lunch in the large, new farm shop, which was busy, and we found Graham sitting outside. He was due to meet his group at Stamford Bridge, but ended up pushing on to Cranswick as he was early. We were grateful as he had the best table! The other group duly arrived but had to make do with the tables around the back.

We made a timely departure (according to the spreadsheet!) with Graham in tow for the last leg and managed to dodge the showers on occasionally wet roads as we zigzagged over the railway a few times to Burton Agnes and the last hill before swooping down to Bridlington and the end point of the Way of the Roses, just over 87 miles from Hornbeam Park.

There was time for a variety of activities as the bus arrived and was loaded, including various combinations of ice cream, tea, cake, walking, fish and chips, sea swimming, beer and wine, although thankfully nobody did all of those. We even managed to miss the heavy rain shower that had been promised – perfect timing. Fourteen happy punters then chatted on the bus on the way back to Hornbeam, with Graham leaving us on the way.

Unfortunately the day ended on a down as it was discovered at Hornbeam that some serious damage had occurred to the last bike on the trailer, and some to the second one as well, despite the careful and attentive efforts of our driver, who was thorough in packing and stopped twice to check the load on the way. It appears that there had been an impact somewhere along the way, but what actually happened remains a mystery as there was no obvious explanation or incident – frustrating for a freak incident to taint an otherwise excellent day out. 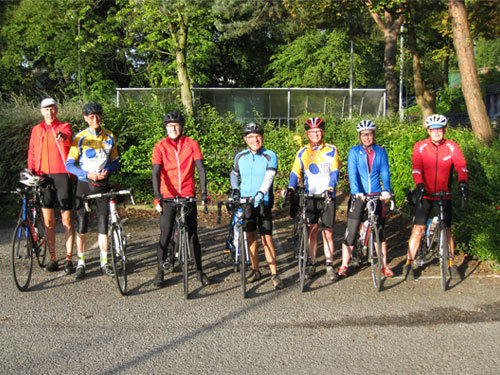 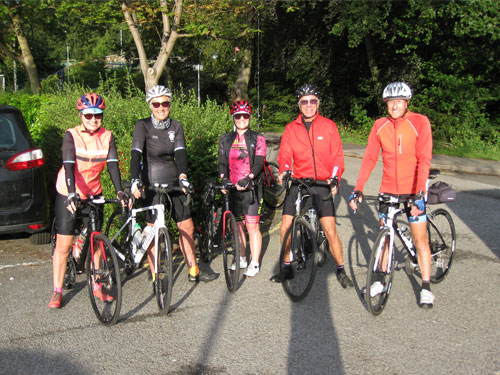 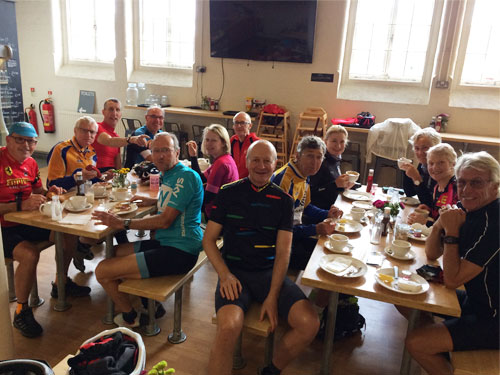 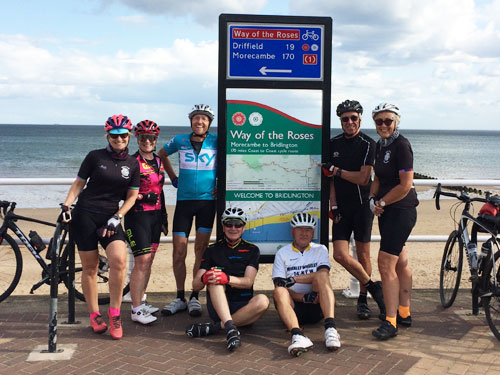 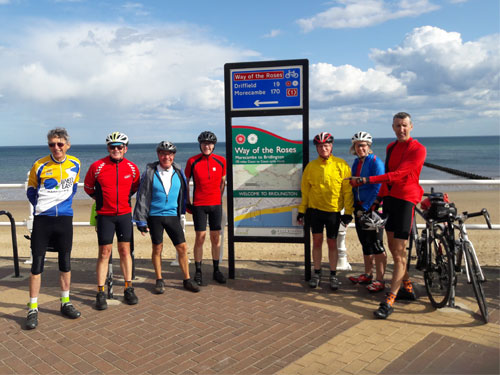 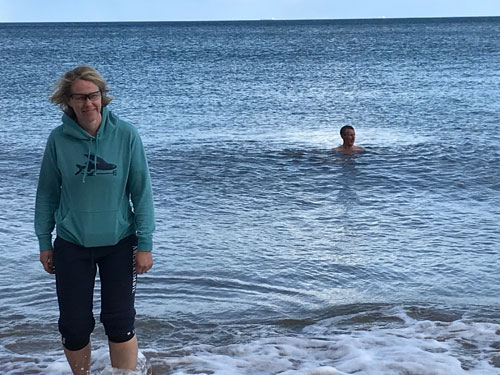 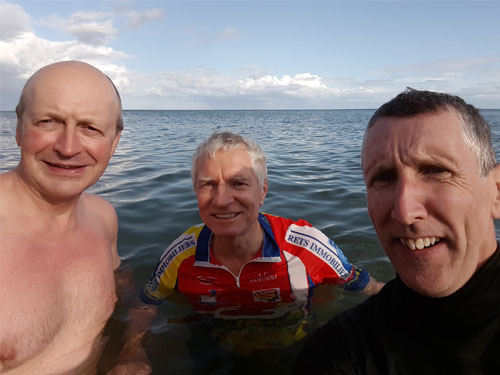 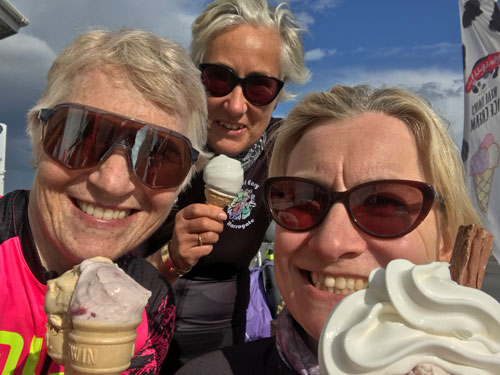