We had fourteen riders for starters, a very good turnout, but a special mention goes to Dave Watson, Nick and Theo who we are especially glad to see.
For such a number and the direction decided it could only be Morrison`s at Boroughbridge, but before we headed in that direction it was nice to have a chat with Martin and Yvonne and John R.
Then in to Morrison`s for caffeine and calories, the caffeine was still very good but for once the selection of calories was not up to Morrison`s usual standard.
(see photos).
The “A” team then headed for the hills?, and the “B” lingered over their caffeine before heading towards Dishforth airfield, Marton-le-Moor, Sharow and Spa Gardens Cafe and more of the same,
taken outside in the Sun (yes it shone on us).
The team consisting of Bob, Dave P, Roy and Theo then headed for Littlethorpe, Bishop Monkton, Markington and up the hill past the old “Drovers” pub site and a wind assist descent in to Ripley and back home via one of our favourite routes “ The Greenway ”.
An excellent ride and a good mileage for all of us, as we are all not at our best at the moment.
DaveP 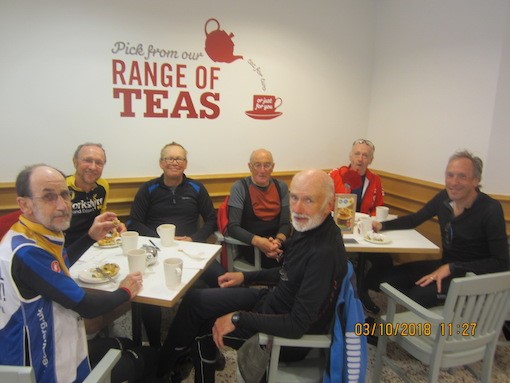 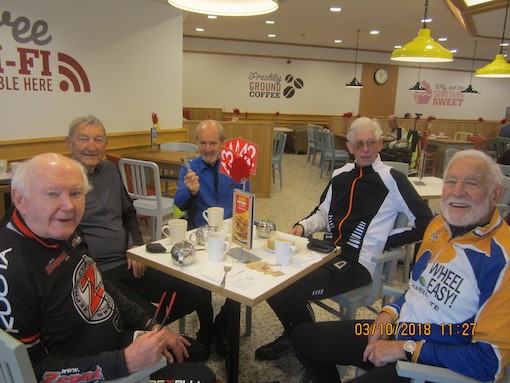 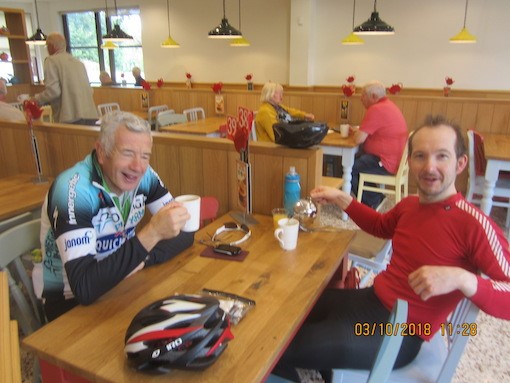 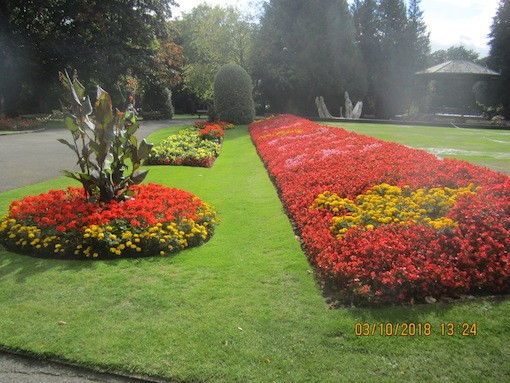 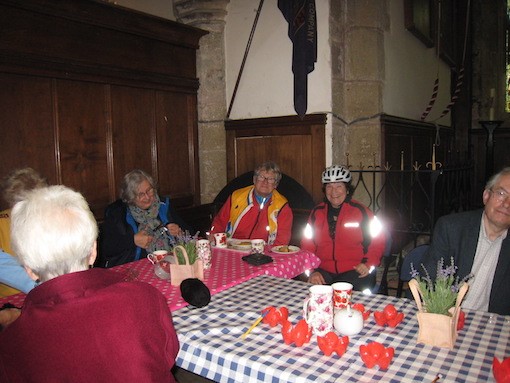 Seven of us chose the Jack Hill route, great views, some good hills and a good coffee stop at Pool Pantry. 31 miles excellent company, quiet lanes, no traffic.
Overtaken in Kirkby Overblow by the Long ride who had been to Ilkley! Maybe they had a short coffee stop! Or maybe they are just quick. Good day out. Gia. 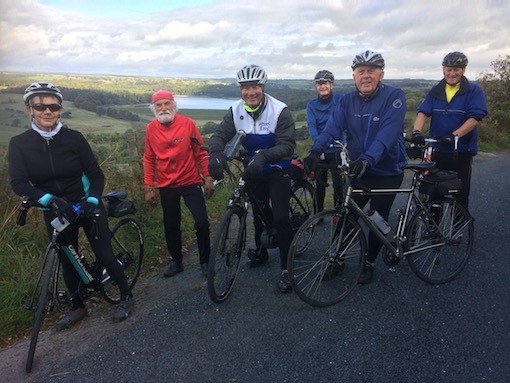 For once the Long Ride had a clear objective today and that was to get to Ilkley. The Long Ride was a bit thin on the ground with only 4 riders initially setting off but were joined by a late arrival by the time we got to the Leeds Road traffic lights. Today’s route took us to Burn Bridge and then Brackenthwaite Lane, North Rigton and along the ridge to Stainburn. The weather in Wharfedale looked particularly wet, but after passing through a light drizzle we arrived at Stainburn in sunshine. We now headed into quite a strong headwind on the Weston Lane/Denton Road to Ilkley. Refreshments were taken at Christchurch church. Which way home? Stump Cross or Cow and Calf. Given the strong westerly that we had encountered it was decided to do the Cow and Calf. The ride was going to plan i.e. Burley Woodhead, Menston, York Gate and Bramhope. At Bramhope it was decided to try a different route back to Harrogate. After doing a circular tour of estate roads we eventually found the one that went down to Arthington Lane. Then it was a full-on sprint to Harewood Bridge. On making the right turn to Kirkby Overblow we came upon the Wednesday Ride group. After Kirkby Overblow it was a case of down to the ring road, Rudding Park and home. PCJ 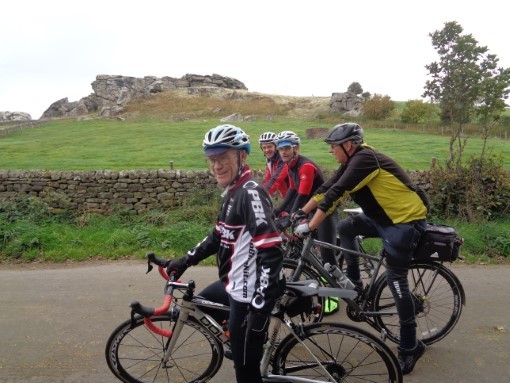 Ann and myself cycled to the Bilton Lane/Greenway junction to wait for the Wanderers arriving. First on the scene were Helen, Zoe and Collette as the advance “plus” group, so we joined them and headed off. I had looked up the route beforehand – thanks to Mike; so between Helen and myself I think we followed it accurately. Helen wanted to be back in good time, so the pace was fairly fast. The first real stop was a photo opportunity at Little Ouseburn Church (being the only bloke I decided it was safest to hide behind the camera), shortly followed by coffee stop at Tancred as planned. We were just about ready for the off when the main Wanderers group arrived, so after a few greetings and goodbyes we headed off to Little Ribston. Two of the group somehow missed us in Whixley as we turned left into Stone Gate, so I had a quick trip back from the A59 junction to retrieve them. At Little Ribston, Ann and I said goodbyes and headed straight up the road to Knaresborough, as the original 3 headed back to Hornbeam on the prescribed route. 38 miles, 317m climb, average 12.6mph (from Knaresborough, including retrieval ride). HelenB 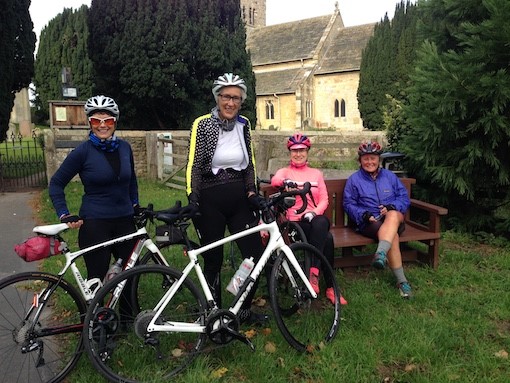 Nineteen happy Wanderers congregated at Hornbeam, including Mac a new recruit. In the absence of (fast) Tim five quickly went off to create the fast group. The rest abled down the Greenway to Ripley along with the Poddlers who were heading for the hills! It was a pleasant day without the wind that had been forecast. Going through the Mount Garret estate Tony successfully rode through the ford. After pausing at Great Ouseburn to read the Blue Plaque on the Anglo-Russian treaty we soon got Tancred farm shop where bacon and egg butties seemed to be the most popular snack. Intermittent headwind was experienced on the homeward leg but nothing like forecast. A good ride, slightly longer than I thought at 38 miles. Mainly flat except for the hill into Follifoot and the Show ground. Michael Smith 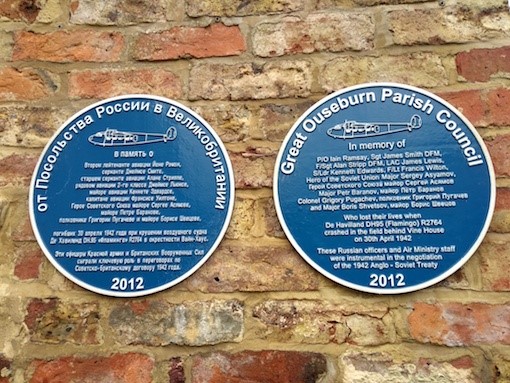 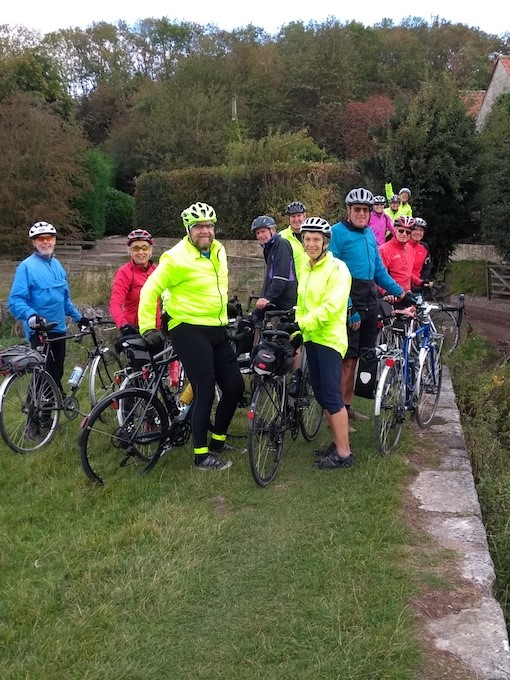 9 of us set out on this very enjoyable repeat of the September away day from Slaidburn. We knew the weather wasn’t going to be as good as the first ride but it was still almost dry. The views were not quite as spectacular but we could still see Blackpool tower and the whole coastline including the nuclear power station at Heysham. The sky brightened for the last 15 miles from the coast back to Slaidburn which made the climb into the Trough of Bowland and the glide down to Dunsop Bridge a real pleasure. Tea at Puddleducks and back to Slaidburn.
Many thanks to Keith and Helen for providing the route which was delightful and is covered in detail in the September 12th reports. Helen’s description of the ride as “wild and beautiful, with pleasingly challenging hills” sums it up very well.
Definitely a ride to repeat on a bright sunny day.
2 punctures, 2 chains off, 42 miles and 1272 metres.
Steve W 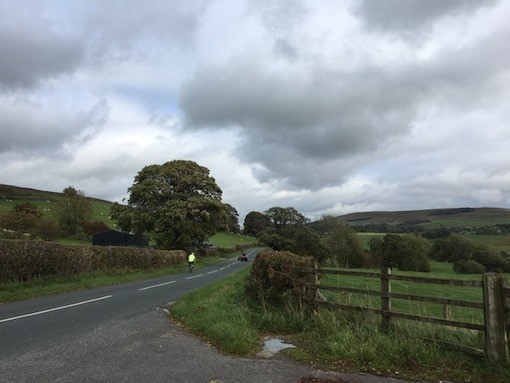 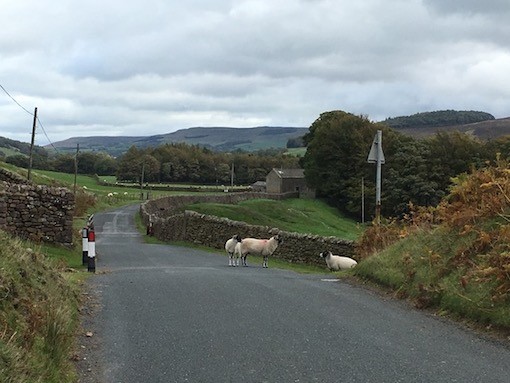 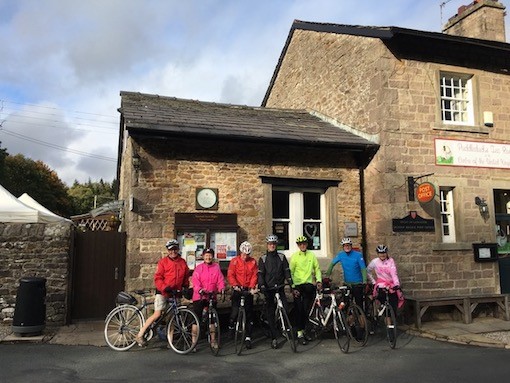 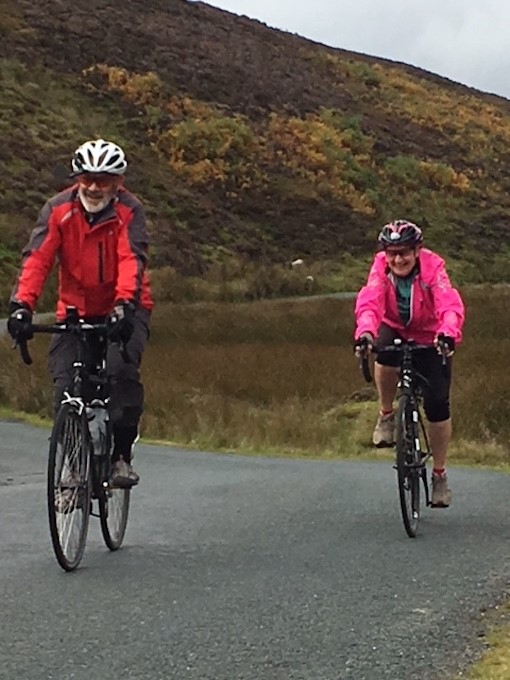