Twelve takers at Hornbeam, including Dave P, Richard (of the two punctures last week), two Chrises (one of whom, it transpires, had a broken spoke last week), Bridget, Brian and a few more blokes. We picked up Paul B and Max at the other side of the ring road near Rudding, making 14. Unlike last week, the ride was incident free to Spofforth, where most of us chose the Harland Way to Wetherby, but a few took the road via 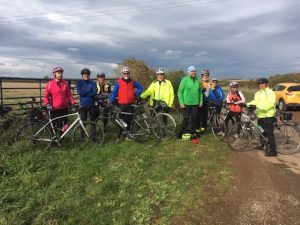 Little Ribston and Kirk Deighton. Somewhere along the way Al D joined the group. At the Wetherby end of the Harland Way we encountered a very keen Railway enthusiast with a book all about the railway which used to use the route. On under the A1 towards Thorpe Arch and Boston Spa, where the route on the website said ‘cafes’. However, we could find no cafés open and willing to take 14 cyclists (Max had left us by this stage). Much umming-and-aahing and uncertainty followed 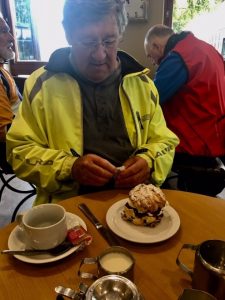 with various suggestions made, and a distinct lack of clear leadership. Eventually we decided to go back to Thorpe Arch, where we were received with the usual efficiency and friendliness. Paul B followed his strict healthy diet by eating a large scone with cream and jam. The sun had come out a bit after our stop, and we resumed the correct route on the website by going back through Boston Spa, Clifford, Bramham and westwards into the wind towards Collingham, going down Jewitt Lane. Across Linton Bridge and then to Sicklinghall and Kirkby Overblow. Several members left us at various points from here on, and about six of us went past the
Travellers Rest. Brian and Colin cunningly avoided the Showground hill by going straight on towards Wetherby Road instead of going to the Showground. About 39 miles. Joe

Janet’s deviation
It’s true, I’m not a fan of the Wath ‘gulley’ road where the majority, including me. have to walk up the hill. So,despite the promise of a great view at the top I opted to deviate and climb through Glasshouses and Smelthouses on the return. There were five in the group and just as we approached little Almscliffe the fast boys overtook us. Just for a change we turned down to Cobby Syke,over the main road and then up to Duck Street. Rather than battle the wind we turned off at the Stonehouse towards Padside – a very pleasant route. We were soon on Heyshaw Moor – one of Mark’s favourite places, so we had to have a photo. We spotted the fast boys again but decided not to give chase. Descending Yorke’s Folly (sometimes called Two Scoops) was quite pleasant in the absence of any cars on the road (just lucky I guess) Coffee stop was at Teacups and it looked as though they had had a refresh – new flooring, tablecloths and some lovely crockery on display. Prices, thankfully were the same and apart from Mark we all indulged in the 3 part toasted teacake. Just as we were leaving we said a quick hello to Steve’s group. It was radio silence as we climbed up towards Brimham Rocks junction but a big shout out to Zoe who managed the climb beautifully – no dabs – even the final 18% bit. A cheer went up when we turned off towards Rabbit Hill Farm and the lovely ‘swoop’ down towards Scarah Bank and Ripley. At the bottom of Scarah Bank who was behind us? – the fast boys – think they were stalking us. Greenway and home. 38 miles with 3195 feet of climbing at 13.1 mph. Great ride, I loved it – thanks to Helen, Zoe, Mark and Dennis. Janet G 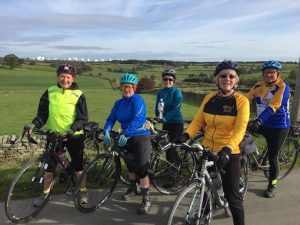 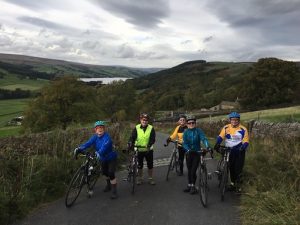 f us set out on this delightful ride – one of my favourites. OK there’s the road with the gulleys at the back of Wath but the walk up the hill is always worth it for the fabulous views and all the downhill opportunities from there.
The run down to Fell Beck was simply great. As was the ride down Yorke’s Folly and the glide down Rabbit Hill.
Although we started with frost on the ground at home, the weather turned out lovely. The sun provided some lovely shadows for the photographers among us. The cold was acceptable and the blustery wind caused a few scares on the faster parts of the ride.
Great company, great ride. 40.5 miles with 990 metres of climbing.
I hope this is on the ride list again soon. SteveR

Congratulations to Resurrection Bikes who won the award for Best Community Group and to Wheel Easy who were shortlisted in the Best Cycling Group category.
It was a good day some excellent speakers and about 20 attendees joined us on a ride down the Greenway. One on a Rational bike, similar to a Penny Farthing! Two others on vintage bikes and several Bromptons! 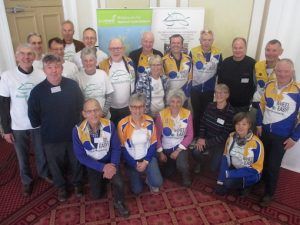 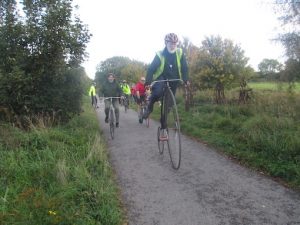 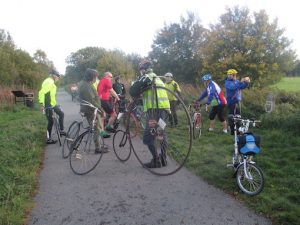 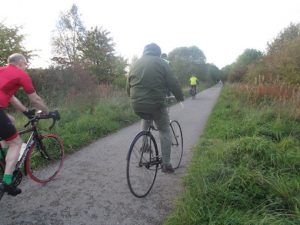 No leader, no route, so five of us set off for the old faithful of Masham. It was a chilly morning with much complaining about cold feet and fingers. A brisk ride to Brimham Rocks via Knox, Hampsthwaite, Burnt Yates, where the de facto leader, PCJ, suggested going to Ringbeck. This suggestion was met with very little enthusiasm so, it was on to Masham. Aft 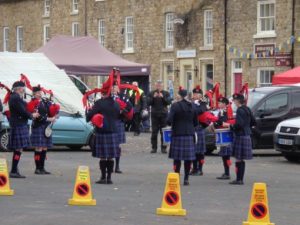 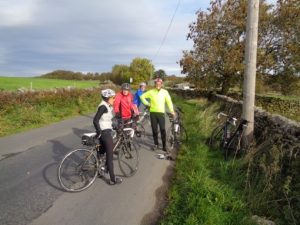 ears. A flattish return route was the order of the day i.e. High Burton, Well, back road to Thornborough, Wath and Ripon. Here two riders carried on to Harrogate while the others went to Spa Café. At Spa Café we met up with Kevin and Colin. A steady road back to Harrogate saw us complete one of the shortest Long Rides. PCJ 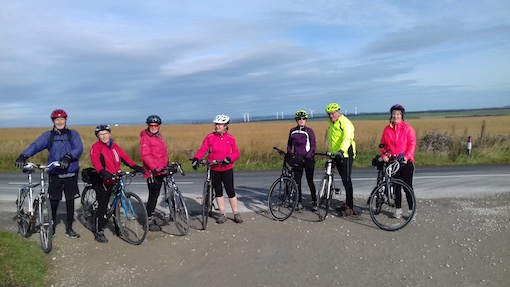