The Wednesday faithful turned out for a ride today with a completely open mind having frantically searched the relevant weather sites for a favourable reading.
Despite the likelihood of rain Kevin, Jill, Sue, James, Jeannie, John and Gia set off towards Boroughbridge and the call of Bean cafe. At Low Bridge we communed with the excellent Dave Siswick out on his first Wheel Easy ride although he proudly told us he already had a 40 miler under his belt so was in good shape.
By this time the rain was coming down, Jeannie had a puncture, the group had fractured in to three but with the help of modern technology we all agreed to carry on, despite the weather and met up at Bean in Boroughbridge. Here we had the usual welcome, good coffee and food especially the huge portion of Brack and as a sign of our time of life discussed cholesterol and pre diabetic symptoms and musicals and all sorts of other good stuff. Our group photo was taken by someone who recognised me from tennis playing days at Chapel Allerton more than 20 years ago! Sue and Jill are volunteers at the UCI and it was interesting to hear about their preparations and the fine uniforms! Our return route was via Roecliffe where we see The Crown is looking for a tenant, Markington and home along the Greenway where we met Tall Tim and then a van merrily driving towards Killinghall telling us that his sat nav had directed him along the Greenway after delivering to Home Farm. We soon got him to turn round, he could well have ended up in the river.
On parts of the ride it looked as though there had been no rain and despite a further soaking we returned home fairly dry and in the sunshine and 34 miles ridden. We all agreed it was Wheel Easy that got us out on a ride today. Gia

Gia: Thank you so much for your most flattering adjective; I like you too.  DS 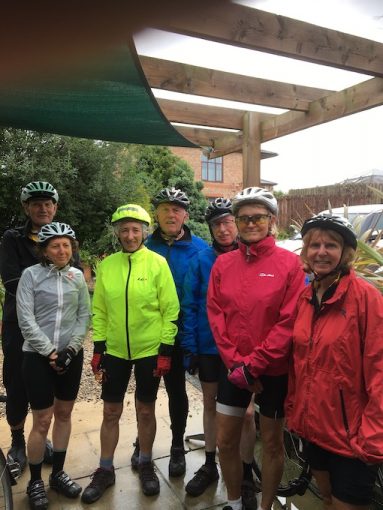 Having been off the bike for what seems like half a lifetime, it was great to finally get out with my mates again; six other stalwarts having turned out, not caring about the expected rain.

Wetherby was predictably chosen for our coffee stop where Morison’s Cafe till was proving to be challenging to the girl wrestling with it. Eventually she got the better of it and we all had a cup of tea and a chat in their “outside” section, which has found great popularity among the EG’s.

The week’s sporting events having been dissected and analysed, our attention was turned to our route. Norman, Bill and Bob wanted to meander, I think Boroughbridge was mentioned. Dave W said “anywhere but York”. Geoff said Otley and Nick and I agreed, so Otley it was.

We still had our wet weather gear on but it was certainly brightening up and we pottered steadily on, deep in conversation most of the way, into a slight headwind. It’s funny isn’t it, that whilst these conversations are so meaningful at the time,I can’t remember a word of it now. Maybe those two dreadful three letter words have something to do with it….(What’s my name?).

A slightly embarrassing situation arose when it came time to strip off the wet stuff, when I discovered that my minuscule saddlebag had no chance of swallowing my rain jacket, and further that the pockets in my super new cycling jacket would not do it either. Nick came to the rescue and found the required accommodation in his saddlebag; thanks again Nick.

The excellent Milk Bar next to the statue of Thomas Chippendale was the venue for our lunch, and I am pleased to award it a “5 Beans” rating; they don’t come much higher than that.

The soft route was chosen for our return, by democratic process, and we were back sheltering at the Kirby Overblow bus stop in about an hour.

Approximately 44 good miles, not much climbing. Thanks lads for a gentle reintroduction.   DaveS. 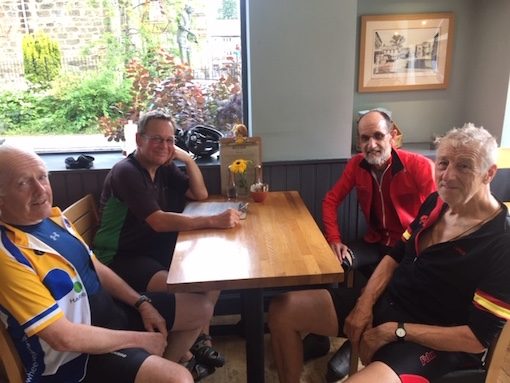 Numbers were fairly low at Hornbeam put off by the possible storm forecasts. There were only two Groups – the Wednesday Riders and the Wanderers.

Initially 11 set off in the Wanderers Group jointly led by myself and Mike Smith. Early on Margaret had a puncture on the Greenway just before we got to Bilton Lane – the cause happened to be a shard of glass. This was soon repaired and we all re-grouped in Ripley.

We decided to abandon the published route which was to take us down Yorke’s Folly due to the rainy forecast. Instead we cycled down Clint Bank to Birstwith, across the toll bridge and up Stripe Lane to Brimham Rocks where we stopped for our first Group photo. Dave R left us at the top of Clint Bank to make his own way to Fountains via a direct route as he wanted to get home early. We also decided to make Fountains’ Visitor Centre our venue which we reached by a different route involving the B6265 for a short distance (the main Pateley Bridge to Ripon road) then past Sawley Hall. The coffee stop was about the quickest I can recall, it seemed about 10 minutes long before everyone vacated the table! Another Group photo outside the visitors centre beckoned before we made our way home via Watergate Road and Scarah Bank, Ripley and The Greenway.

The initial light showers soon cleared up and return journey after coffee with in glorious sunshine – well worth venturing out today. Thanks to Nigel, Phil, Mike S and Mike W, Liz P, Margaret, tall Tim, Vince, Chris and Dave R for your company. For the record the ride was about 33.5 miles.     Tim R 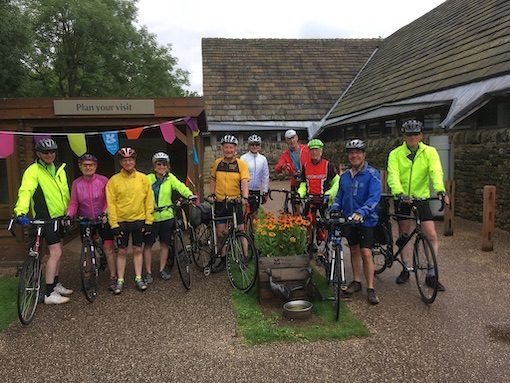 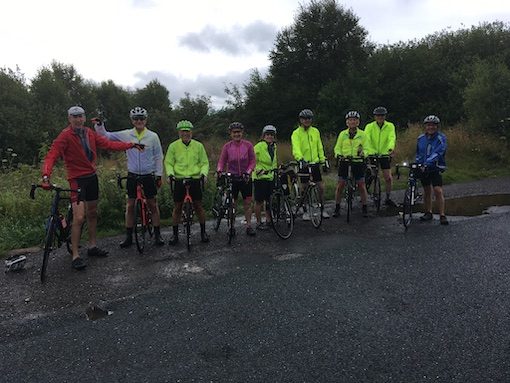