Just three set off on the long ride today, destination Park Rash – the hardest climb in the Dales.  Andy Ack joined us as far as Grassington and re-fuelling at Cobblestones, then returned home (lightweight in all senses!).
The original three headed gently up the valley to Kettlewell with varying degrees of foreboding for the hard work ahead.  Onto Cam Gill Road and the first ramp was quickly despatched.  The second was tough, as always.  On sight of the third ramp up to the top, Tall Tim, a Park Rash virgin, let loose a colourful commentary, but he dug in and negotiated the final section successfully.  Well done Tim, and without ever getting out of the saddle!
Coverdale was a bit misty, but enlivened by an encounter with the resident Heeland Coos.
Thereafter the going was a little easier, via East Witton, Masham, Grewelthorpe and Ripon, aided by a tail wind, eventually arriving home a bit after 5pm after 83 tiring miles. RichardL. 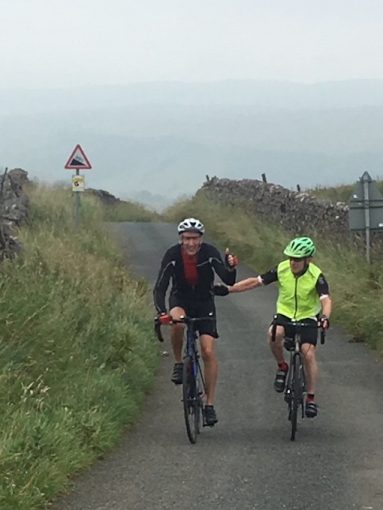 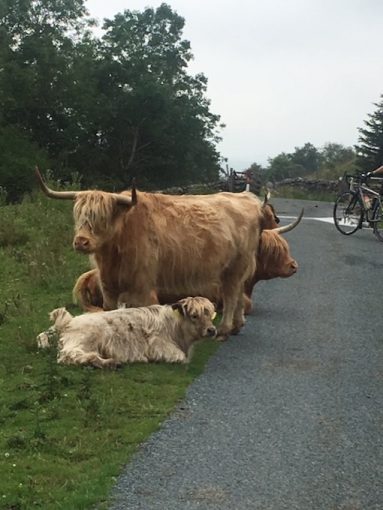 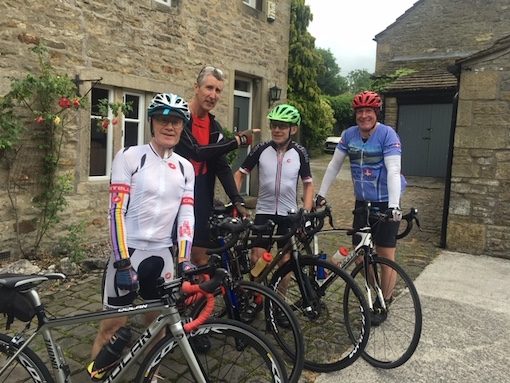 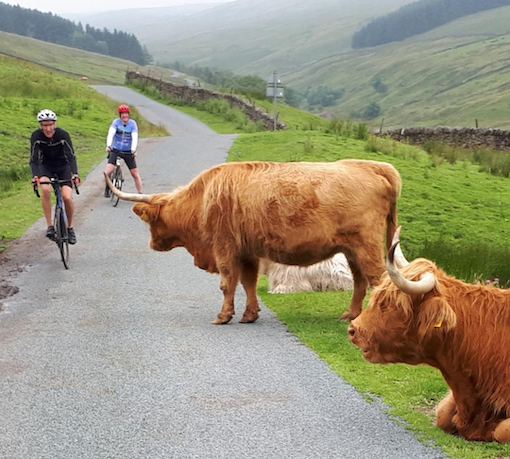 The rain gods seem to have done their worst on Saturday and so we set off from Hornbeam under grey skies but it was dry.  Three new members joined us for the ride, Jasmine, Connor and Dave.  All three rode well and I think are destined for greater things with Wheel Easy.  The route was one of my favourites heading away from Hornbeam, up to Rossett, The Squinting Cat, Beckwithshaw and across the Moor to Little Almscliffe Crag.  Then, after a tweak to Jasmine’s saddle height, we continued past the Sun Inn, over the A59 and down to Kettlesing. My plan was to show everyone the house with the fabulous garden at Clapham Green but the heavy rain had really taken it’s toll on the blooms.  So as consolation we headed straight for Sophie’s cafe at Hampsthwaite where the ever cheerful Nicola served us hearty food.  Then it was back homewards through Hollybank Woods and along the Greenway.  Dennis reminded me that on the very first ride he did with Wheel Easy at least 11 years ago I led everyone on the same route!  So, yes, one of my favourites and it has got better over the years with the addition of Sophie’s and the Cycleway back home. 23 cheerful chatty miles! Martin W. 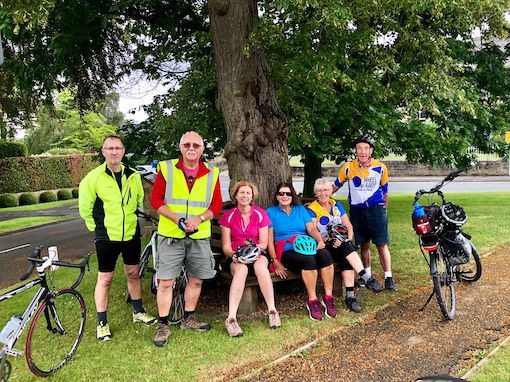 Six of us set off from Hornbeam towards Bramhope via Kirkby Overblow and Weardley Bank. It was suggested that we could try and set a Wheel Easy record of three coffee stops before we rode 30 miles. Our first coffee stop,suggested by Debbie, was at Bramhope Deli which is certainly worth a visit. The ride continued along Bramhope Old Lane and York Gate before dropping down into Otley where we stopped to decide where our next coffee stop should be. Unfortunately we stopped outside a medical centre where Debbie had worked for a number of years. James came to her rescue and quickly moved us on by suggesting Pool Deli as the next stop. The Deli was particularly busy and we were informed there was an hours wait for hot food so we just had a drink and something cold. We returned via Almscliffe Crag where Glyn left us as he wanted to do some extra miles. Unfortunately we failed in our target of three stops but Debbie did find Gia’s cycling glasses which she lost in May at the top of Leathley Lane near the Briscoe Lane turn off. Once again an excellent ride in great company.  PaulT. 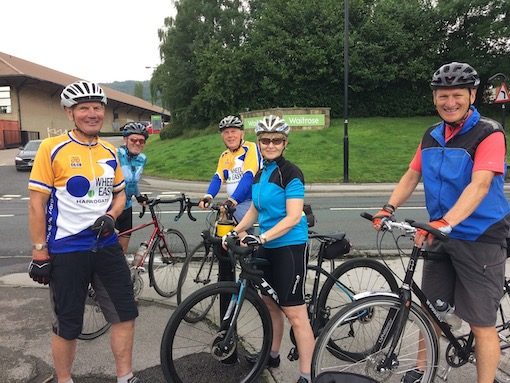 Dominated by unusual weather the skies looked grey and overcast, the snowploughs and earth movers were on standby in case of abandonment on Askwith Bank. Ten of us set of with high hopes the cycle ride would not be cancelled. Chris and Mike assigned as back markers as a few of us had various fitness issues and I wanted to make sure no one was left behind. John, Colin, Kate, Richard, Steve W, Corinne and Sarah joined my peloton. A ride to Beckwithshaw and on to Stainburn. Along the route to Fewston, Mike had a police car up his backside, I thought he might get pulled over but with a friendly wave he let them pass. Arriving at Fewston, Sarah carried on as we waited for Colin and Mike who had disappeared. A quick phone call no reply, I sent everyone on as we had the long climb up. Mike had hit glass on the road and had a puncture, Colin stayed to assist. Reaching Timble we all regrouped and climbed up Askwith Bank and then down to Weston. At Cockpit farm Steve and John carried on, Sarah was already seated as we joined her. After delicious refreshments onwards to Otley and a steep climb up to Farnley. A very posh horsebox with a woman with a very loud voice shouting at us ‘ I got 12 hands in here, let me pass’ whatever that meant!. The group had been disciplined and left gaps, but going up a steep hill at various paces with tight bends it was impossible to get out of her way, most of us managed to pull in to let her pass. This confused me where I was on the hill and told Richard we were turning right on a steep bend which brought him to a halt. Mike and Chris were on the right track and we regrouped ready for the gated road to Stainburn Forest. A quick look to see the newts, only a frog in the pond, plus orchids. Onward through the rough stony track and right back into Harrogate, where each went different ways home. Good laughs, short but hilly ride of 30 miles. Liz F. 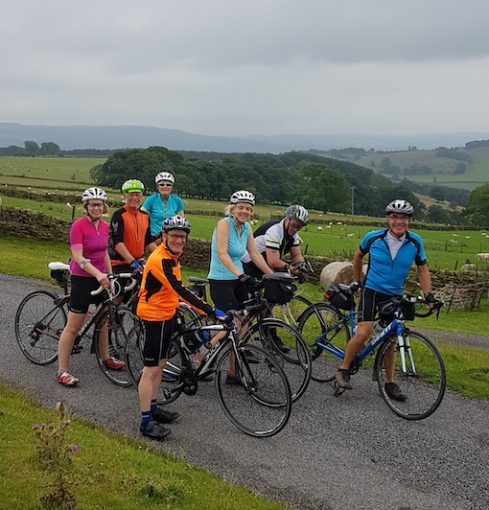 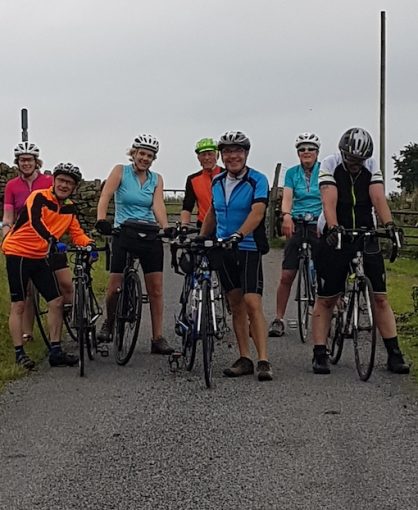 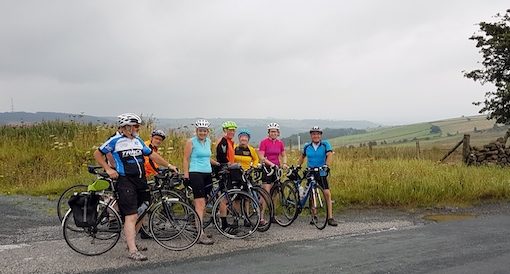 No takers for the bridlepath ride from Pateley today.

I have done most of that ride recently, so instead of repeating it I went checking out some other tracks, with good results.

The track from Scar House over to Horsehouse in Coverdale has been impassable from time to time, but its been repaired. This opens up some Coverdale circuits to us. I also rode the track which starts at Scar House dam and climbs to follow the ridge above Upper Nidderdale to join the Lofthouse/Masham road….all good.

A few random photographs; Scar House reservoir from the abandoned settlement and from the high track, and a shooters refuge got up to look like a chapel. Colin 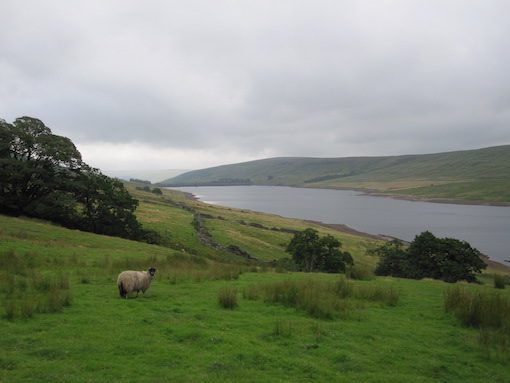 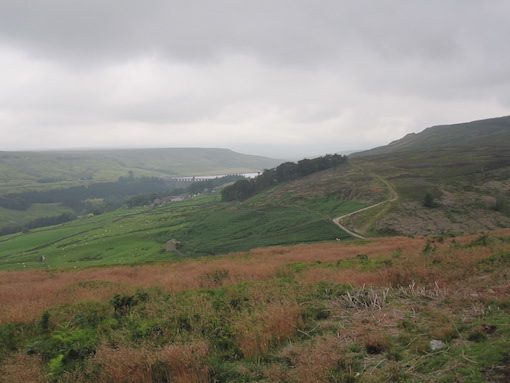 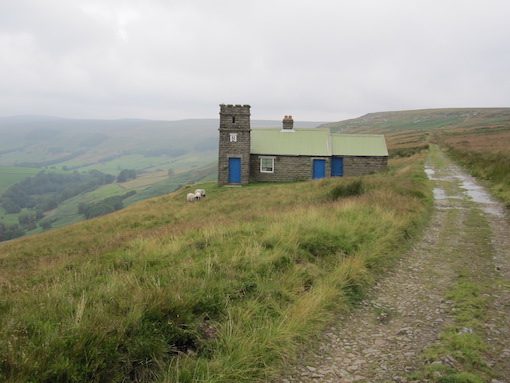