Just me today and then I found Sir John who arrived with a large boot on his right leg holding in two fractures, caused by an accident he had 3 weeks ago with some greenhouse glass.We rode to Knaresborough, Lingerfield, squeezing past the roadworks to Scotton, Brearton, Nidd, A61, Ripley and the Greenway. Around 20 miles on a beautiful autumn day.       Jean

We had a good number of riders at Low Bridge today with the promise of good cycling weather.
However our first thoughts today were of Dave Watson whose wife Pamela passed away earlier this week.
At this moment we can only express our sympathy and support.
A study of weather conditions from our seafaring riders suggested we should head southeast, our numbers and other circumstances meant that Morrison`s cafe suited our requirements.
Away we went splitting up into small groups reflecting speed required and other road traffic.
After our break the “A” team headed towards Cawood we  think ?, the “B” team comprising Bob, Dave P and Theo headed for the ridge route taking in Sicklinghall, Kirkby Overblow and the showground.
Not a big mileage but quality miles with the sneaky little hills taken in good style by us all.
Dave P
We had the usual weekly adrenin fix on the mad dash from Knaresborough to Wetherby, but today there was even more adrenelin than usual for some of us at the mini-roundabout outside Aldi in Wetherby, when there was a coming together of 2 EGs.  A friendly fire incident that thankfully didn’t involve any tarmac, metal, or actual bodily harm!
After coffee, we left the B-Team still putting the world to right in Morrisons: 2 of the A-Team (Chris B and David R) returned to Harrogate, so 7 of us (Dave S, Dave Wi, Colin P, Peter B, Richard & Lesley S, and myself) set off past the racecourse and on through Taddy, Ryther, Cawood, and Stillingfleet to Naburn, where we had lunch at the Marina cafe.  For most of us this was a new gastronomic experience.  Unfortunately, Mr Siswick was begining to regret his suggestion for our lunchtime venue when he discovered ‘beans on toast’ was not on the menu.
However, the waitress duly obliged by taking his order and Mr S was well satisfied.  Our outward journey had been hard work into the strong easterly wind, so we were looking forward to the wind assisted return leg, but – hey ho! – as you might guess, the wiind dropped during the afternoon as we returned via Copmanthorpe, Askham Bryan, Tockwith, and Cowthorpe, and was flat calm by the time we arrived back in Knaresborough.  It had been a good day of Autumn sunshine, and plenty of evidence of the floods around Cawood and Nayburn.  Mileage woould vary between 52 miles for the Knaresborough knaves and 62 miles for the Harlow Hillbillies.             Eric

The Wanderers soon sorted themselves out into 3 groups very efficiently, with the faster group setting off first. We were the last group of 8 and took up the rear allowing all the other riders to get on their way up Leadhall Lane, all the rides seemed to be going in that direction. From Burn Bridge we crossed the A61 which was very quiet for a change! We cycled on to Kirkby Overblow and Sicklinghall, the sun started to come out feeling warm, Joe and Geraldine left us at Linton. We had some good views cycling along Crompton ridge and caught up with the second group, time for the photo stop, allowing them to get back in front of us. We then turned to Bramham, Clifford and Thorp Arch for coffee. A good pace was set on the return along Rudgate to Cowthorpe, Little Ribston, Follifoot and Harrogate. A good ride with lots if chatter. 38miles. Chris R. 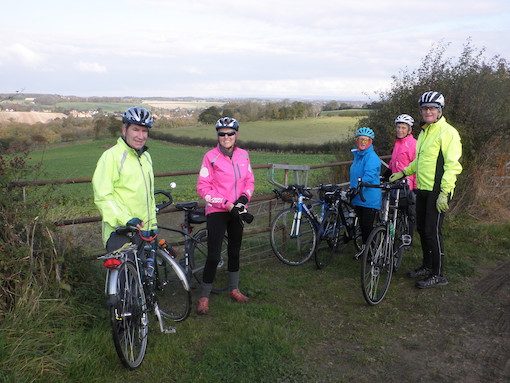 The pictures show the climb up Jewitt Lane, followed by the celebration, and a view from the top.
We also enjoyed the route described above by Chris.    Michael P. 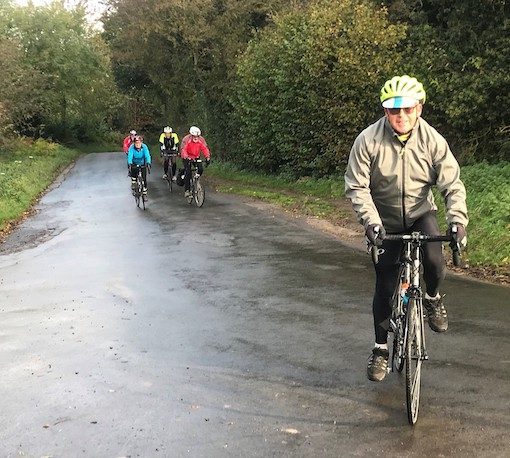 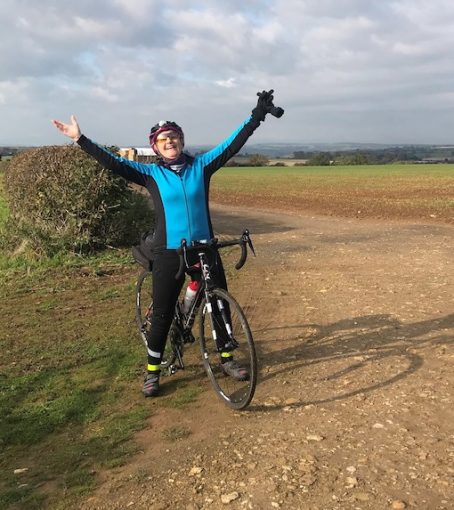 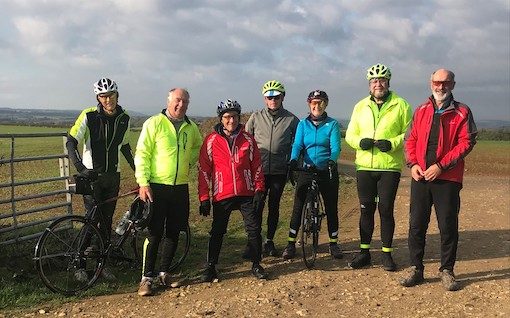 Seven riders opted for a ride to Bolton Percy this morning – the aim being to have coffee at Doyly’s cafe.We set off towards Kirby Overblow intermingling with the Wanderers group till they turned off to take a slightly different route.Onwards through Wetherby, Walton and Tadcaster in a warm sun which made us all think of shedding gear till we hit the cold wind.We were serenaded by John R doing his Gilbert and Sullivan repertoire – till he found he was riding on his own so he soon stopped!We met Sarah, who had cycled from the Leeds direction, at the cafe and it was great to catch up with her. The coffee was soon warming us up and after the usual chat we were ready for the trip back to Harrogate.Onwards towards Appleton Roebuck and then Sara and Stuart headed towards Wetherby and a shortened route home whilst the remainder of us headed towards Askham Richard, Tockwith and Cowthorpe.James and Paul T left us at Little Ribston to head towards Knaresborough whilst the others headed for Spofforth,Follifoot and the Showground hill.We all then split up to take our various routes home having done 47 miles on a route we don’t often ride. Our longest ride for sometime- more like a summer ride distance but it was a very enjoyable ride in good company on a cold crisp day.      Kevin 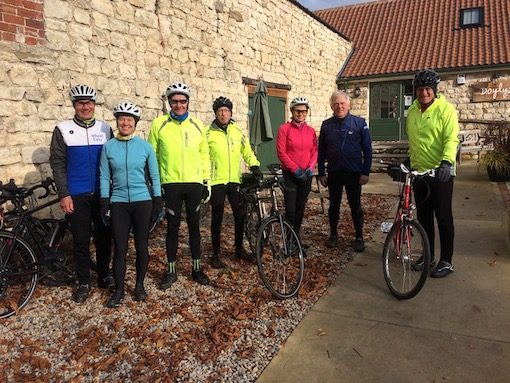 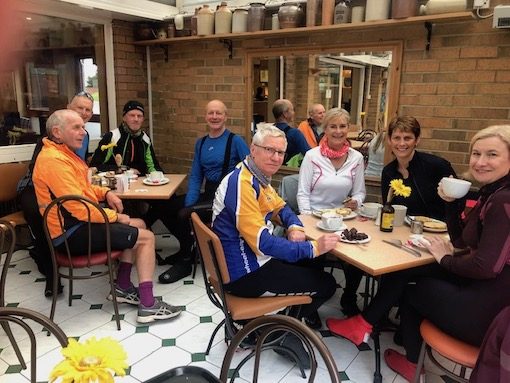 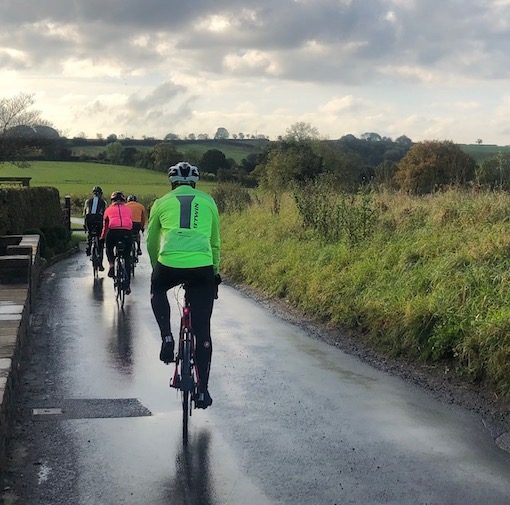 Having previously ridden north, west and east recently, it was about time to go south or south west. To this effect today’s Long Ride, was to Ilkley via Kirkby Overblow and Weardley Bank. The outbound ride was fairly straight forward with the exception of an unexpected diversion around Bramham. As we approached Menston the committee decided that Cow and Calf was a good route into Ilkley. Refreshments were taken at Christchurch church, very satisfying. Although the return route via Stump Cross was mooted the committee decided a return via Otley and Norwood was a better option. The photo shows Richard L recovering from his exertions on reaching the top of Norwood Edge. Now it was Little Almscliffe, Beckwithshaw, Otley Road and home. PCJ 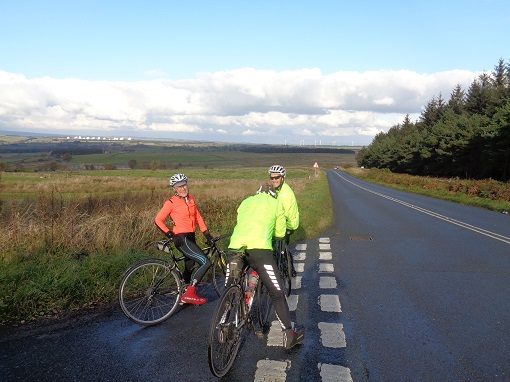