With no ride leader or route, I had a plan to do the Old Brereton Loop and see if anyone wanted to join me. Just the 2 takers said that they would follow me and after a very speedy arrival in Ripley we agreed to extend and take in Holly Bank woods and go to Hampsthwaite. After a speedy stop at Sophie’s we returned up Hollins Lane where we parted company either going Grainbeck Lane or a loop through killinghall to come back along the greenway. Thank you for your company, Jill J 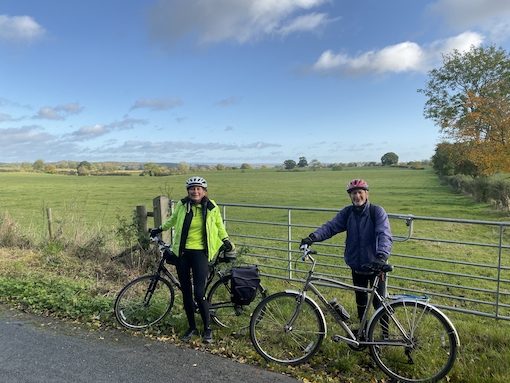 A lovely though cool sunny day forecast for one of our regular but hilly ride up to Timble. What could go wrong? Well, we had a rather more incident-filled ride today than was desired.

We had an uneventful climb up to Little Almscliffe against the wind and then decended to Swinsty Reservoir. But along the B road, Sandra came off her bike, bumping her head. Fortunately she was attended by three(!) independently passing doctors (obviously similar to London buses) plus one of our own, who pronounced that she didn’t have a head injury. We hope you’ve not been put off cycling Sandra, and you don’t have too many bruises.

Onwards up to Timble where it started to rain. Expected of course, especially as we had a forecast of sunshine all day. But fortunately it didn’t last and we soon reached the A59 and the longest climb of the day up to Blubberhouses. We had an easy ride down to Hampsthwaite, where we had something to eat and drink at Sophie’s.

We returned via Hollybank Woods, Ripley and the Greenway but not without a further incident where we came across a dog in Hollybank Woods which was obviously anxious and lost. Fortunately it was friendly and allowed itself to be caught but didn’t have a tag with owners details on it. At this point a friendly couple came along with their own dog (and a lead) and offered to take it home to find the owner but all ended happily when the owner finally turned up after about 20 minutes.

Our return to Harrogate was uneventful. Lovely weather (mostly) and about 28 miles in good company. Al D 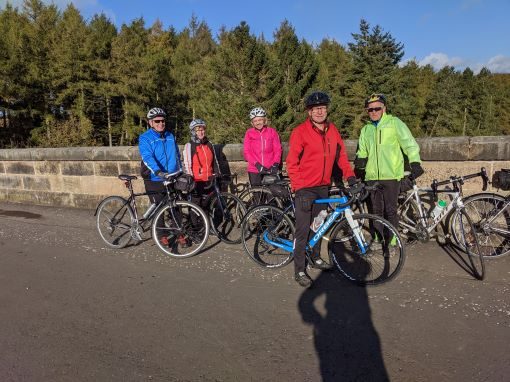 What a great day for one of the best rides on our calendar shared by a great number of members. Four groups set out for the goal of Greygarth Monument a route devised by Colin and Martin. Today was spectacular in every sense. Scenery, views, sunshine, colours, up hills and downhills and ridges. And most importantly two cafe stops. One at GT’s and the next one at a very busy Fountains visitor centre. we returned via Ripley and the Greenway where Kevin applied his skills to repair a dislodged cable on a young person’s bike. Colin left us somewhere up on the moors to go off road and am sure he had a great day out. Sunshine all day, mostly quiet roads. We are very lucky. Thank you to Declan, James, Debby, Kevin, Colin and Paul for a great ride. 43 miles. Gia

After the terrible rain Friday and Saturday WE members flocked to Hornbeam this morning to flex their muscles. On a beautiful autumn morning a large number opted for the ride to Greygarth monument which meant we had to split into 3 groups. Once the fast riders departed our group of eight(Mike W, Steve W, Alison, Chris, Liz F, Margaret, Justin and myself) set out. Aware of the warning James had given us we took it easy along the way Greenway due to the leaves. On through Ripley and up Scarah Bank(good to see the potholes had been repaired) and to Sawley. An impromptu board meeting was called to debate whether we should stop at Risplith for coffee. It was agreed it was too early. On to High Grantley and Coal Hill and upto Grey Garth monument. This was my debut to these parts therefore the purpose of the monument was explained even that Mike W’s grandfather had helped to build the walls for the grouse shoots. On to Laverton and Winksley and Fountain Abbey visitors centre(Steve left us at this point) . It was heaving. People must have known we were coming and they were there a plenty to see us. ??!!!  As we were leaving the third group of WE members arrived. Quick exchange of greetings and we were on our way. Brisk ride back to Ripley and back onto the Greenway. Saying our fond farewells at Bilton Lane while Mike and I continued to Starbeck and split our ways on Forest Lane and home. Great ride and company. 43 miles for me and 3600 ft of climbing. Thank you. Colin B 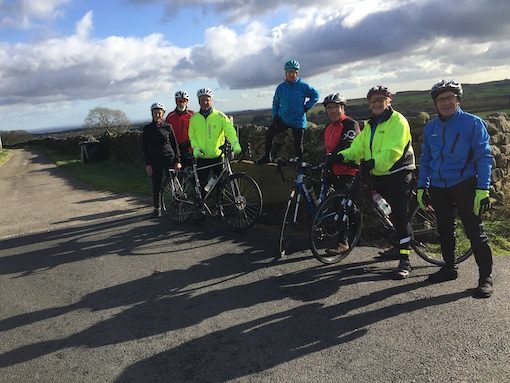 Eight riders left Hornbeam heading for Bedale, unfortunately John H suffered a catastrophic tyre failure in Knaresborough and was not able to continue with the ride.  The remaining seven were not aware of John’s plight until we were well on our way to Ripon.  The ride to Bedale was uneventful; it was just a case of avoiding the deeper puddles en route.  The North End café in Bedale was closed so we went to the Station Café.  After several rounds of “beans on toast” it was back to Harrogate.  The return journey via Thorpe Perrow and West Tanfield was quite pleasant with the weather now bright and sunny.  PCJ 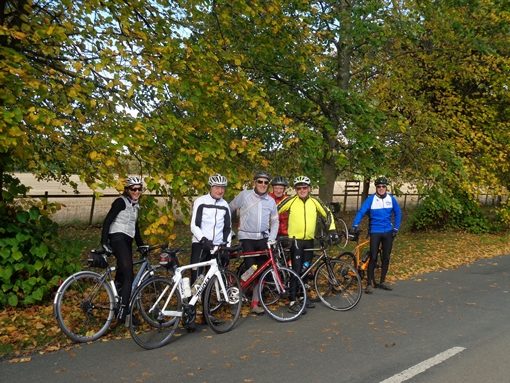