After the UCI World Men`s Championship and the somewhat “damp” conditions, it had been suggested that for drier conditions next years venue should be in the North Sea, however its seems Australia got the vote.
Today the condition were near perfect, sunny, dry and active activity coolness, not like having to hold athletic events at midnight in some countries because of the heat.
We had seventeen riders at Low Bridge, a good number, someone suggested Boroughbridge and take it from there, no one objected and away we went, splitting in to groups relative to speed , route and distance, but with one destination. After a good get together including mopping up spilt tea the “A” team headed for distant parts and the “B” team consisting of Bill, Bob, Dave P, Norman and Theo headed for Ripon accompanied by guest riders Nick and Whixley Wheelers founder Graham.  At Ripon Canal a decision was made whether to head for home or Spa Gardens Cafe, guess the decision ? . so lunch was taken outside in the sunshine “perfick”. Sorry no photo`s despite Caroline`s best efforts, somehow the effect on DP`s phone camera of us bonny lads was to much to bear and it flattened its battery in protest.
Then it was home via Markington and the Greenway, a nice relaxed ride, a fair mileage, excellent ride conditions and as usual good company.
Dave P

An arrangement had been made to meet and have coffee and girlish glee with Jen Appleyard in Wetherby . Caroline had planned a very enjoyable route and even managed to clear the skies and make way for very pleasant sunshine. Three of us – Jane, Liz and Sue – joined her for a very pleasant and quite speedy  ride through Knaresborough, past Ribston Hall and on to our Shambles cafe stop. Our very fast pedalling ensured we were actually half an hour early !!!! However, Jen’s bus tour had also arrived in good time and she was there to receive us and demonstrate her arm raising technique following a replacement shoulder joint two weeks ago. This was joyous to behold and received a round of applause  and some bemused looks from fellow coffee swiggers!! Thus fortified, we returned  via Spofforth and Follifoot to the Pavilions where a trio of red kites hovered expectantly over Fodder or fodder . We parted at Woodlands Corner and  Liz and Sue returned to Hornbeam and Caroline and Jane headed for Max’ Bike Store. A thoroughly good time. We are all looking forward to Jen’s eventual return to the saddle.  Sue D 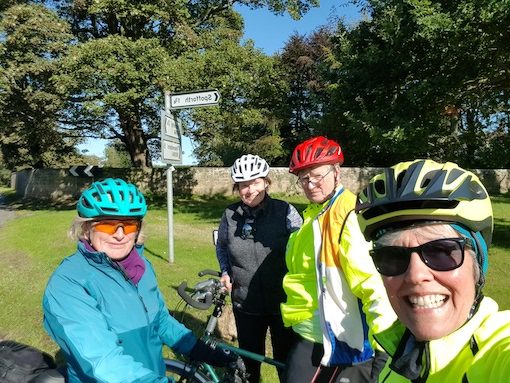 There were a lot of Wanderers wanting to ride today with a good sunny forecast after the recent torrential rain. A group of faster riders went off first leaving Steve W and I with a group of we think 21 then 3 more joined us at Ripley. We had trouble counting at Hornbeam with so many others milling about and we have asked to be directed to a separate car park in future. At Clint one of the faster riders had a mechanical but it was soon sorted and they all passed us and disappeared from sight. Then as we reached Brimham Rocks Road, Margaret had a problem with her bike which the cycle experts among us couldn’t sort, so she headed back home. She says the bike is now in the workshop and it may be to do with a shifter. She sends her thanks to everyone for their help and support.

The route continued up to and past Brimham as glorious views opened up around us and the early morning chill had disappeared. Stopping for a photo above Brimham the 2 groups became one on the promise to leave gaps and as Geraldine, Joe and Paul left us to return via Rabbit Farm. The route continued with a fast ride to Fellbeck and a slower ride up onto Dallowgill then a fast ride to Grantley and a much slower climb up to G and Ts at Risplith. They were expecting us and did a great job in feeding us all. On the way out the lady in charge had us all posing for her photos in front of the spots. Then via Low Moor Lane and Watergate Road we were soon heading back to Ripley and home. Thanks to Steve W for all his help and everyone for contributing to a great day out. Possibly 38 miles and 2,800 feet of climbing. Liz P 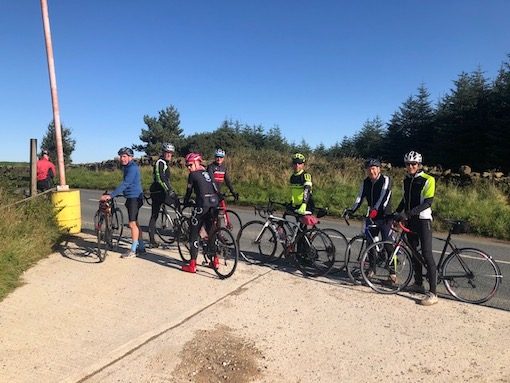 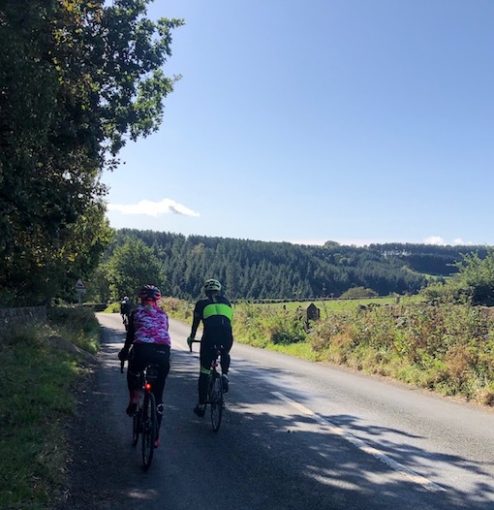 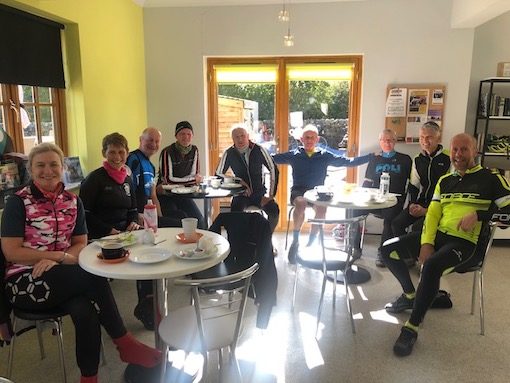 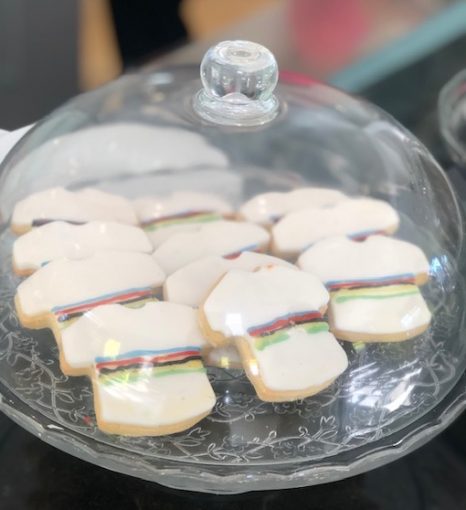 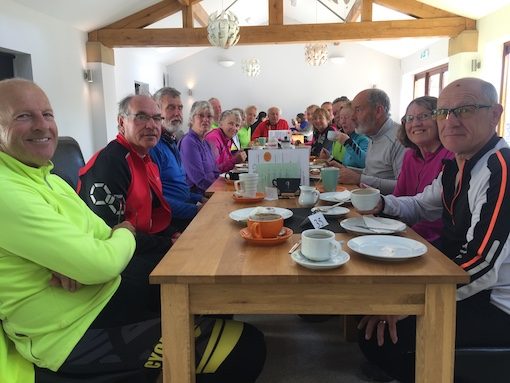 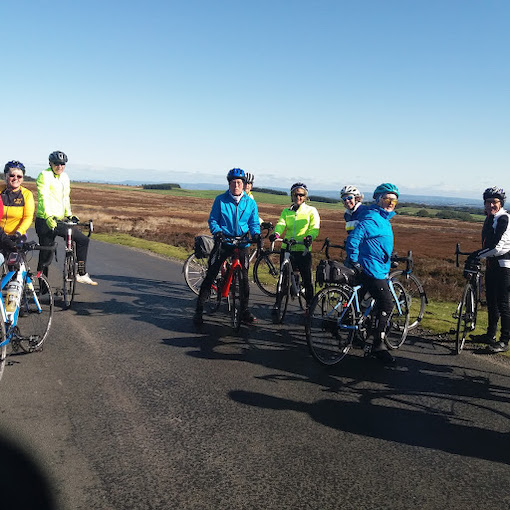 Although it was a lovely autumn day, the Wednesday Riders were a little thin on the ground, but we did manage to increase our numbers from 3 on Sunday to 5 today, that is until Colin abandoned us to go off road. Kevin and I left Hornbeam on our own, but collected Colin, Paul and Alan at Ripley and headed for Masham via Fountains and Low Grantley where disaster struck aa I punctured on the rear tyre. However we found a relatively warm sunny spot and after stripping the bike to lighten it and with expert help from Colin and the others we were soon on the way again, through Kirby Malzeard and over the moors where the views were stunning. Colin left us part way over the moors to head across country to Greygarth and beyond – thanks for your company and expertise with the puncture and hope you got home safely. After the fantastic drop down past Swinton Park into Masham we thought it would be quiet in Johnny B’s as there were only two bikes outside but it was packed. Our luck held as a table of four became vacant as were walked in and we enjoyed the usual fast service and excellent food. Our return was initially to Grewelthorpe and thanks to the men clearing the gullys on a closed road  we enjoyed a quiet traffic free ride almost to the village. Paul and Alan left to return through Kirkby Malzeard, which left Kevin and I to head home through Ripon, Littlethorpe and Knaresborough. A great day out with good company and great views plus putting 55 miles more into our legs… James G

What a day to be on the tops…as clear as clear can be, blue skies and sunshine.

I left the Masham ride at the sign saying Lofthouse 7 miles, unsuitable for motors, and did a circuit of Kirkby Malzeard moor, dropping down to the tarmac at Greygarth Tower….good shooting tracks all the way, views stretched from the factories on Teeside to the power stations in the Vale of York; from Roseberry Topping to Great whernside, and from Gouthwaute reservoir to Leighton Reservoir. ..But not all at the same time!      Colin 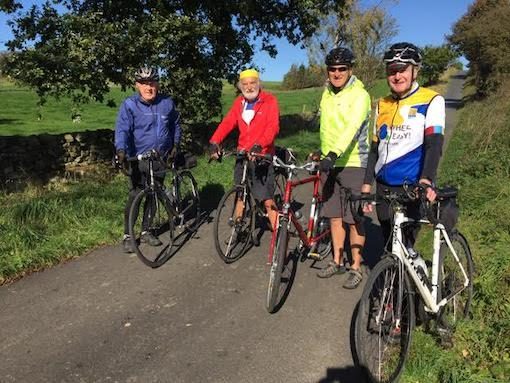 When Dave turned up at Hornbeam to join Peter and Andy, they decided a quorum had been reached for a long(ish) ride. I was at Bilton Lane waiting for the first group of Wanderers, but decided to join them instead.
A group of Wheel Easy riders were gathered at Ripley; after a little coaxing Tall Tim and Peter joined us to make a nice sized group of 6. Masham was the initial target – via Scarah bank (mind the pothole/bollard in the road), Watergate Road, Winksley, Grewelthorpe. We went through a “sump” just before Winksley Banks – see below, Peter deciding that wet feet were better than washed out chain. Before Masham, there was a diversion down Roomer Lane and Swinton Estate due to a road closure. We thought about seeing if the closure was passable, but it was downhill –and back up if not!
Dave carried on for a trip over to Lofthouse, while the rest of us had a rest and refreshments at Johnny Baghdads. Over the river then due north before turning east to Thornton Watlass, Snape, Carthorpe, Wath, Ripon, and the low route back to Knaresborough in glorious conditions. Stopping at Bishop Monkton for a photo by the stream. Peter peeled off for Burton Leonard, as I did in Knaresborough, leaving Tim, Peter J and Andy to return home. 54miles, 2100ft climb at an average13.7mph for me. Allen B. 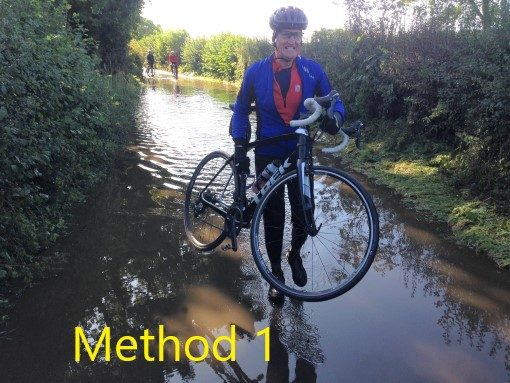 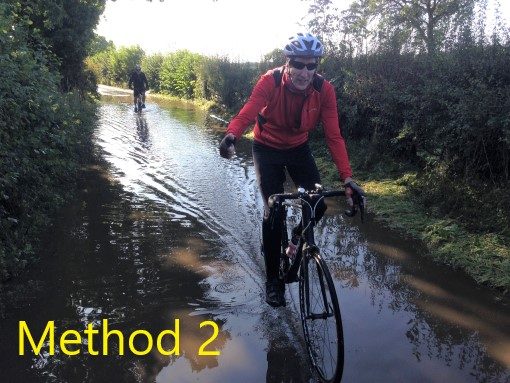 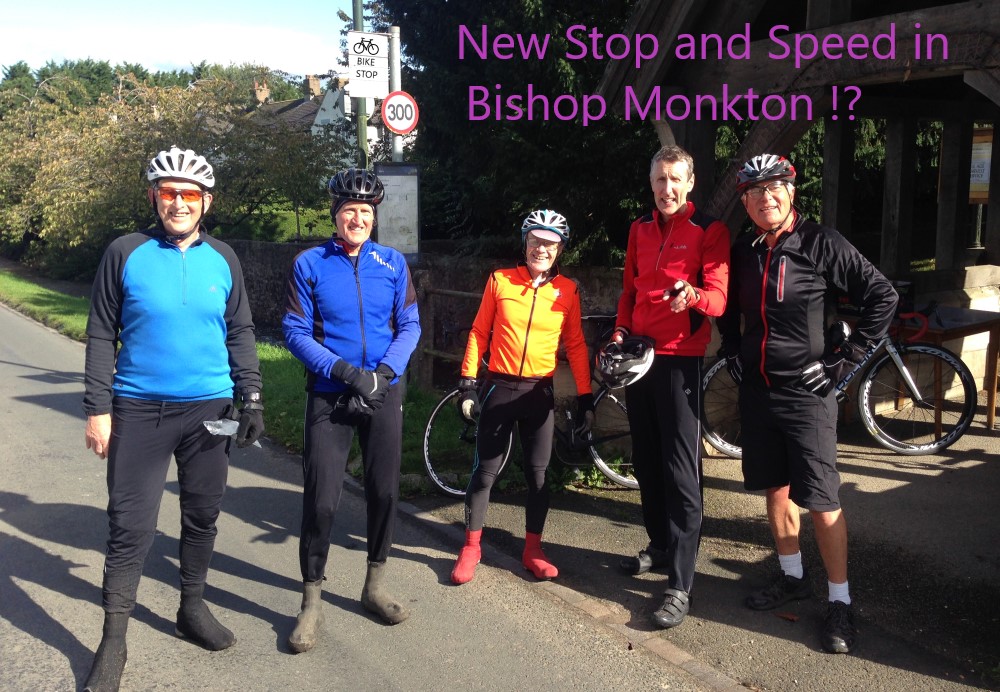 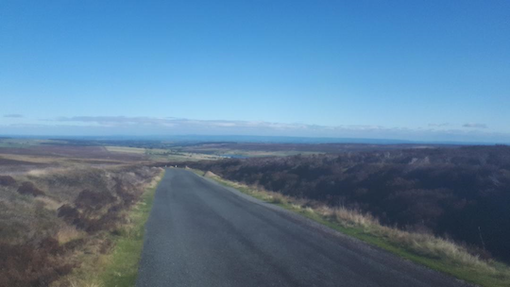