Four people decided to do route 183. Farnham, Arkendale, Great Ouseburn, Aldwark Toll Bridge, Myton on Swale, Helperby and Brafferton, Boroughbridge, a long lunch, back home to Harrogate.
Events of note include a photo opportunity at Aldwark Bridge, a delightful off road experience of about three miles cutting along a very scenic, slightly sandy, quite stony, nearly surfaced track that even Richard Pugh had never been along, Jane trying to rescue a bee from the road, lots of chat and laughing, a pleasant lunch break and five and a half hours of solid cycling. 40 miles give or take .CG from a prone position with an ice pack over my head.

Wanderers “A team”
With the luxury of 2 ride leaders, I headed off first with a faster group of about 8 people – that grew to 11 by the time we got through Knaresborough. The twists through the backwater of Knaresborough – Breary Flat Lane/Hazelheads Lane/Bar Lane was new and hopefully enjoyable for some of the team. Photostop in Burton Leonard, then off to Markington via Bishop Monkton. Karen headed back from here, the rest pressed on through Fountains deer park to Spa Gardens. We arrived to find the EGs just finishing their first (?) stop, and sat outside as the conditions were good.
As we had made good time, and 2 of the team were breaking off to visit a friend’s barge, I offered an extended ride via Skelton, Boroughbridge, Aldborough, Grafton, Arkendale to the remainder. All but one fancied this, but fortunately the B team arrived just as we were leaving, so he decided on another cuppa and join them for the trip back. The remaining A team of Collette, Vince, Colin, Richard, Tim, Tim and myself headed off past the racecourse.
As there were a few disappointed coffee connoisseurs, we decided to stop at Bean Emporium in Boroughbridge – a whole 30min after the first stop! Maybe my recent ride with the EG’s was having an influence. We met another small WE group (Wednesday ride?) at the café. Vince was the unfortunate one to get a coffee served down the back of his neck ! We continued to plan along the undulations to Grafton and Marton. As we rode up from Ferrensby, I advised the group that they would have to find their own way back from Knaresborough; and so was accused of shirking my duty! Having made a 10 mile round trip from Eastfield up to Hornbeam and back at the start of the ride, I just didn’t fancy doing it again – that’s my excuse and I’ll stick with it.
A good route if I say so myself, the extended route about 45 miles, a modest 1600ft of climb and average 13.4mph. Allen B. 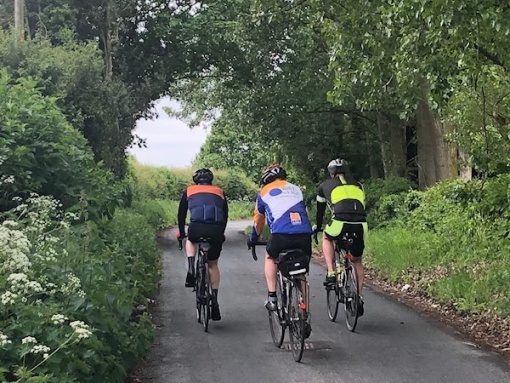 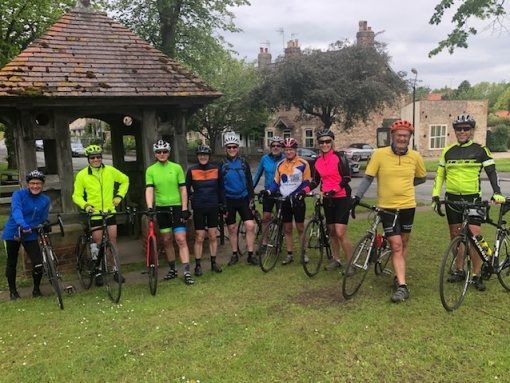 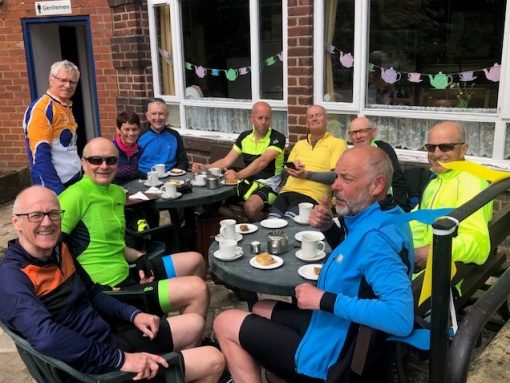 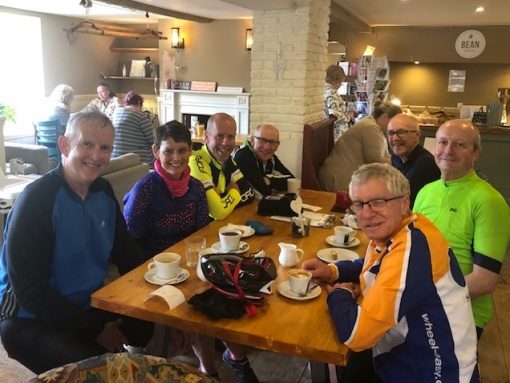 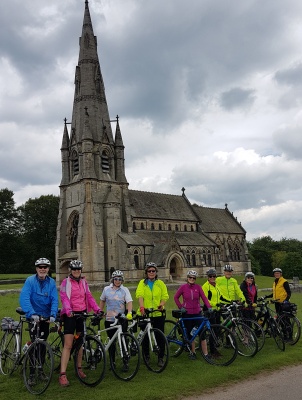 Numbers were down slightly due to the away day ride which left two groups to wander on Alllen’s ride. We enjoyed the back way past the nature reserve in Knaresborough and the lane round the back of Burton Leonard church. The group were fortunately on the ball and noted Angela’s missed turn in Bishop Monkton and a group decision was made to have our refreshment at Spa Gardens, and lovely it was too.
Mike and Keith suggested and alternative route back (and I understand Allen’s group added an extra loop) so we journeyed through the Mount Garret estate, and returned by the Greenway. The rain held off and we all enjoyed a beautiful varied ride. Angela Rickards

Depleted in numbers this week for varying reasons Jeannie, Colin, John and myself set off from Low Bridge on what for me was a mystery tour so I can’t guarantee the accuracy of our route, however what an enjoyable experience our small team made this ride. Via Little Ribston, North Deighton & Whixley to Boroughbridge we had, what is always a delightful stop, at Bean Café where the Wanderers rolled up later too. Returning via Roecliffe with photo at one of the Devil’s Arrows, John firstly whetted the off-road appetite with a smashing bridleway and Colin wasn’t going to miss the opportunity to encourage us to do more taking us through Mountgarret estate before returning via Nidd to Ripley and tea/cakes at church. A Really relaxing ride of some 40-ish miles around the loveliest of quiet lanes and bridleways. Thanks, as ever for the knowledge of ride leaders and for great company. Alan S 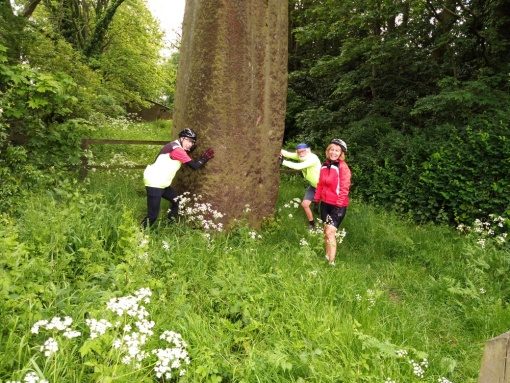 Nine riders turned up at the Car Park at Kettlewell to repeat the May Awayday ride, including Liz who did the first ride. One thing which wouldn’t be repeated was the glorious weather which the original group had.
This was reflected in the decision to start an hour earlier to, hopefully, avoid the rain forecast later in the day and the variety of dress of the riders. Some were in full winter gear and, the more optimistic, in shorts and showerproof tops.
Steve lead us off on the ride down the valley at a steady pace so we could enjoy the early morning views with the first objective the climb of Fleet Moss. We maintained this pace until the climb which strung us out as the we made our way to the top.
Everyone gathered at the top, which being early was very quiet. There were a few ‘first timers’ who were enjoying the moment of triumph (and getting their breath back) before we made the rapid descent into Hawes
Being early it was decided to designate this as a ‘coffee stop’ as it was too early for lunch so it a plethora of cake and toasted teacakes was consumed with beverages station cafe/bike shop. Richard had a chance for some retail therapy with some sale bargains on offer and a smart gilet was purchased.
Refreshed we set off and headed towards Askrigg and Hawes with the decision on a lunch stop still hanging in the air. A flattish ride enabled us to enjoy more great views and we spurned Askrigg for lunch (too soon) before we listened to Steve Wright in the afternoon (get that one?) and agreed our lunch stop at the Visitor Centre at Aysgarth Falls. Despite being busy we got served quickly and the food, and chat, was good as we refuelled for the second climb.
With it getting cooler Richards gilet was road tested (and found to be worth the money) as we made our way towards Bishopdale. We made a quick detour to the waterfalls (thanks to Liz who suggested it) which we all enjoyed and after a group photo we set off to tackle the climb.
As we set off, we were into a strong headwind down the valley which made the climb much harder and which strung us out again. Everyone made it with a few ‘touching tarmac’ over the last section.
However, we all felt a sense of satisfaction of completing the climb as we completed the last part of the ride which was, thankfully, mostly downhill. We arrived back in the car park as the rain clouds gathered and whilst we had ridden with the threat of rain we had remained dry so Steve’s decision to start early was justified.
Another great Awayday route and a great ride in good company. 41 miles and 4200 feet of climbing and we managed to keep dry.
Thanks to Steve for leading and to all the group for the company and support throughout the ride. Kevin

There was an air of indecision just before 9.30am as to where to go? Unlike the example set in Westminster we made a firm plan to head for Stean. Five riders left Hornbeam for the long ride on what was a fairly chilly start to an early summer day? We used the Greenway to Ripley and then ascended Scarah bank en route to Brimham. It was nice taking in unfamiliar views travelling along roads in the opposite direction to normal. At Glasshouses Peter J’s saddle mysteriously came loose and quite a delay ensued in effecting a repair.
We rode on tail wind assisted to Stean. Andy testing our stamina by sustaining a rapid pace up towards the top of Nidderdale. As normal the service was excellent at How Stean and during a relaxed break the normal banter broke out.  There was an assertion that the ride leader was being indecisive when considering various options to return to Harrogate (I claimed consultative !_). We eventually decided upon Silver Hill and onto Dallowgill Moor. We descended quickly to Grantley and enjoyed a second stop at Fountains before our plod back to Harrogate via How Hill, Ripley and the Greenway.
All in all, an enjoyable ride of around 60 miles, returning before the rain and as always in beautiful countryside. Martin D 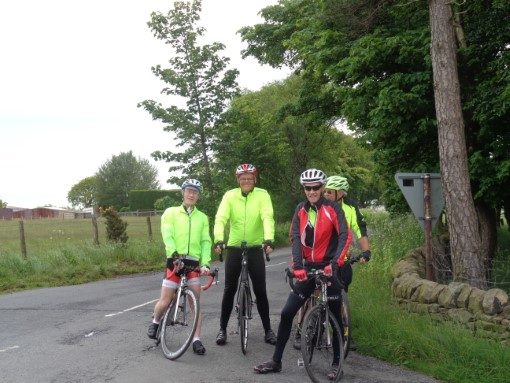 There was a good number of Wheel-Easy riders at Low Bridge including the EG`s of course, including Bob Shears without his electric bike, his bike was a lean mean racing machine without mudguards (obviously to get back before the rain starts, as forecast). Ripon was decided as our first coffee stop and away we went slowly to start with all the usual chat, then the pace picked up and away went the “A” team, leaving the “B” team consisting of Bill, Bob, Dave P and Norman with Eric guesting with us continuing at a slower pace and as it turned out not much slower. Previously on our run in to Ripon and Spa Gardens Cafe, Norman had got the caffeine urge and blasted into a sprint for the Café, this time it was Bob and Dave P who burnt rubber on the road. On arrival at the cafe Bob mentioned something about being very tired and would return very slow, Hah! After Caffeine Cakes and Chat the “A” headed for somewhere, as Dave Siswick said but where? Bill, Bob Dave P and Norman headed for Sharow, Marton-le-Moor and Boroughbridge led by Bob setting a good pace, Norman made the unnecessary drink gesture and in we went. Then it was back to Harrogate once again led out by Bob, his performance today was no one sprint wonder. A comfort break at High Bridge then up the Beryl Burton cycle track, the last pain of the day, here Bob once again amazed us by telling us he had missed his gears and gone up in his middle ring instead of hid granny ring. The term granny is not really appropriate as there are many Granny`s we know that can outclimb, outsprint and leave us looking at their dust when on their bikes.
As to Bob`s high level of fitness we can only put it down to riding a heavy electric bike with the power off?
Lastly our best wishes and thoughts go out to Dave Siswick and Jan, Dave has had an accident on his bike and is in hospital for a hip operation. Dave is a prominent Wheel-Easy member, has done and does work for our club. He`s a good un and a tough un and he can do it. Dave P.