With wet and windy conditions, I arrived at Hornbeam not expecting a crowd of riders-and I wasn’t disappointed!
The Long ride and Medium Plus ride quickly decided to join up to one ride and agreed a hybrid route and were gone and with no short Leader the short and Medium group combined to give 7 riders setting off for Ripley.
It was cold and wet and when we arrived Kevin (another one) called it a day and returned home after a quick group photo. The remainder set off up Hollybank Lane and when we reached the top Sarah and Paul (the remaining short riders) were directed to Hampsthwaite to savour the delights of Sophies and then home via Knox(hope you enjoyed coffee and made it back OK), whilst the rest set off to Shaw Mills and the climb up Cutthroat Lane and then onto the Drovers Corner.
John left us here so we were down to three as we made our way to Markington and onto Fountains Abbey. Margaret remarked on the appearance of blue sky (certainly enough to make a pair of sailor’s pants!) and the sun coming out.
We stopped for coffee at Fountains and the sun was drying us out as we shed layers.
After an enjoyable break we headed for Littlethorpe and our usual run back to Harrogate via Bishop Monkton and Knaresborough.
It was now a pleasant day and we really felt justified in deciding to ride today- even the climb of Knaresborough hill into a head wind didn’t put us off.
Mike departed at Starbeck leaving me a Margaret to ride back to Hornbeam and complete a good ride of 35 miles. It had been a mixed bag of weather but a good selection of company- thanks to everyone who made the effort.  Kevin 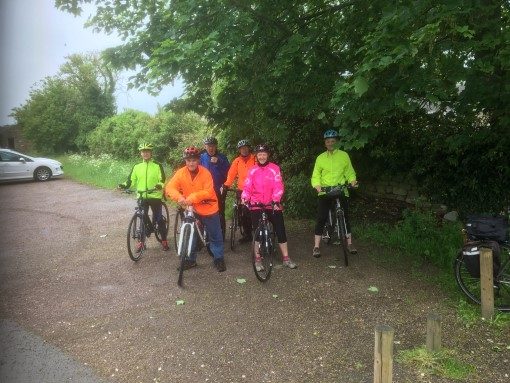 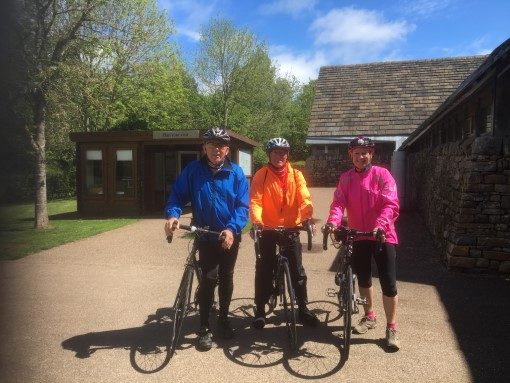 You can tell from Kevin’s report above that there was little enthusiasm across the whole club for riding activity this morning. Seven of us assembled and whilst discussing possible routes, we were gently informed by PCJ that Stump Cross and Grassington were definitely off, and that we were welcome to join him in the gym if we liked.

Decisions were made; two rides joined up, White Horse Bank cut out for slightly less ambitious proceedings, and we were off, enjoying a modest tailwind.

An early call for sustenance was suggested and Coxwold Cafe chosen as being close to the route. It so happened that the business had changed hands yesterday, but the very pleasant lady said she could could provide a good cafetierre of coffee and a piece of lemon drizzle cake she had made yesterday. This was sufficient for our needs and we enjoyed a pleasant sojurn in the slightly overgrown but pretty garden for the bargain basement price of £4.

By this time, we too could see the proverbial sailor’s pair of pants sized blue sky, and our rain kit was stowed for good, having been on and off a couple of times during the ride out.

Our plan was to bypass White Horse Bank by means of turning left in Kilnsey and go on to Bagby, and hence home by the customary route. It soon became clear that the forecast of strengthening Westerlies in the afternoon was correct, and the usual struggle with the ever increasing wind began.

Somewhere around Norton-le-Clay, the group split, with the stronger riders pushing on whilst the others took a little more time to savour the scenery.

We had a splendid day out, as we always do, with much wisdom exchanged. Thanks to everyone for good company.   DaveS 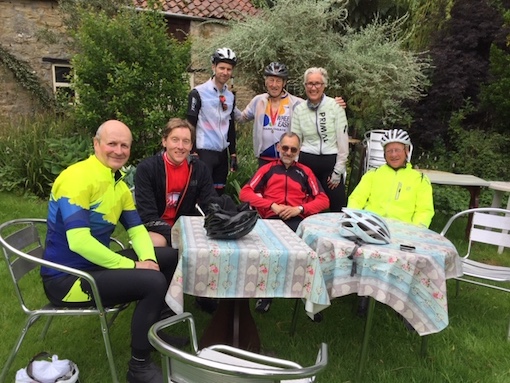