Lots of notes from home with a variety of excuses plus the prospect of a wet day gave Hornbeam a slightly empty look for a Wednesday morning.

Two and a half riders decided to poddle and what a joy the ride turned out to be.  And extremely gentle pace was maintained….up to Beckwithshaw, right and through the park to Little Almscliff, passed the Sun Inn with its two added peacocks preening themselves on the roof.

We then noticed the thunder clouds heading behind us, so we decided that a cup of coffee before we got soaked would be good. So the quickest way to the Ripley cheese and onion pie was chosen and after an excellent cup of coffee, a glorious pice of cheese pie, a chat with the lovely ladies of Ripley church and a meeting with the half poddle who’d done his own route to Brimham Rocks we set off in a mega down pour back home…having another chat along the Greenway with Mr Rowson who’d been somewhere up the Dale’s and had decided to return early to avoid an unscheduled shower. 24 delightfully slow but slightly moist miles. Caroline G

This was a lovely ride for the scenery, the company and almost for the weather. We started off with a forecast of rain from 2pm (if you use the Met Office) or rain all day (if you use the BBC). I have a theory that the BBC is rarely right so I came expecting reasonable weather and that’s what we got, mostly. A bit damp at the start and rain from around 1pm.

We started off quickly because everyone was going along the Greenway today. So, numbers were a little unclear until we got to Ripley. With over 20 and one more to collect along the way, we split into two groups with me at the front, Mike Wills leading the second group and Jonathan backmarking for everyone. We’ve now discovered that the true role of a backmarker is to lose as many people as possible – actually they all told him they were leaving. By the time we got to Brimham Rocks Adventure Farm for coffee/ lunch, we were down to 14. Was it something we said?

At the Farm, we enrolled a new member for Wheel Easy and it turned out they were the youngest too – see the photo

The ride had several enjoyable climbs with some marvellous downhill sections – Hampsthwaite over to Kettlesing, Kettlesing over to Darley and then, my favourite, Stripe Lane, Brimham Rocks and down to Ripley. All in all a cracking ride. Three of us arrived at Hornbeam wet and smiling. Everyone else had peeled of home by then. Steve W 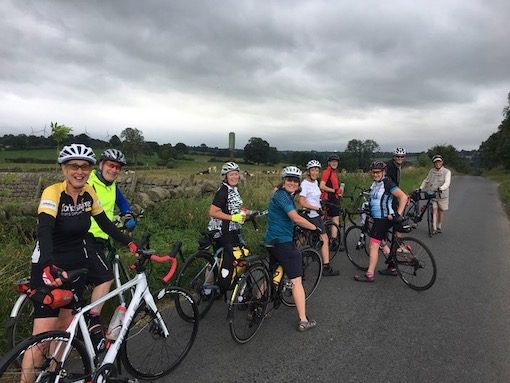 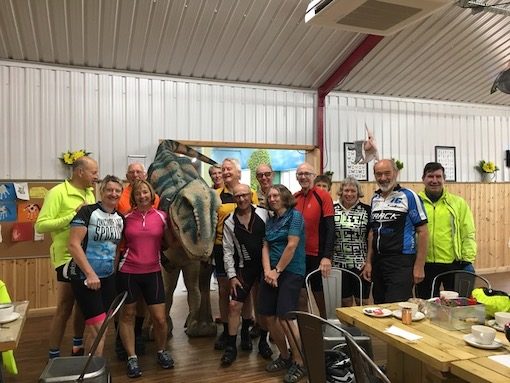 Ten Wednesday riders ventured forth after sheltering at Hornbeam from the first rain for a while and for once the forecast was right as it soon eased off and we had a reasonable morning, but unfortunately it was also right as it threw it down later as we started to return from our visit to Pateley!

Ten became nine at Ripley when Martin was not 110% and  left us to meet Yvonne in Ripon – hope you feeling better now. Having tried to out manoeuvre the Wanderers by taking the road into Ripley, it back fired when some were caught out at the crossing. However we eventually reassembled and made our up to Brimham via Stripe Lane. Stuart, Jill and Jennie then turned right for the Rocks and further afield whilst the rest descended through Smelthouses into Pateley to meet and share coffee with Colin at Tea Cups.

An enjoyable break was had with discussion dominated by the news that Parliament was to be prorogued in September and various associated topics. The rain came just as we left Tea Cups and the group then split again with Bob, Alan and Maris heading for Fellbeck, Brimham and home whilst Jeanie and I took off straight down the dale and over the Toll Bridge into Ripley. It did stop raining after a while and hopefully everyone arrived home almost dry. Thanks to everyone who came and hopefully it will not be too long before we see Colin back in the saddle. James G. 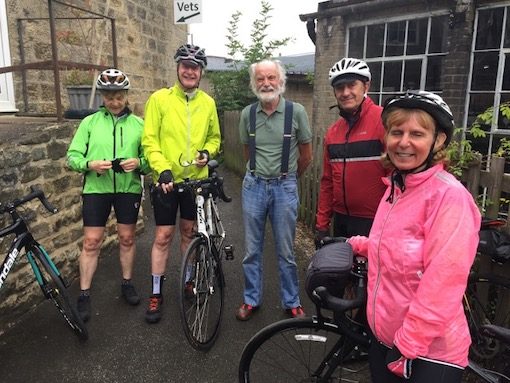 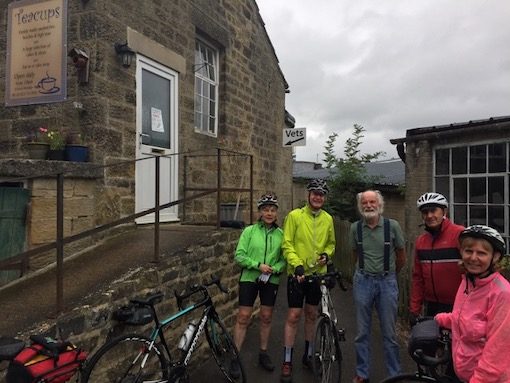 Today’s ride was long in name only.  We’d agreed in advance that we wouldn’t venture too far away from HG so that a quick conclusion could be made if the weather turned rotten.  The rider list certainly wasn’t long – just three, but the delay at the start certainly was long, caused by a late discovery of a puncture and a retreat back into the car as a sudden downpour hit the Almsford area.  Derring-do last Sunday, coupled with his late switch of wheels and higher gearing, meant a flat ride for Richard L today.  All of which pointed east to Tadcaster and Lemon Tree.

Here our discussions focussed on the balance that needs to be struck between blaming motorists for car-dooring and cyclists doing their bit by giving themselves the best margin against the errors of others.  Has Cycling UK got the balance right, we mused?  Over the last crumbs of teacake, a route was hastily conceived, heading towards Copmanthorpe and Askham Richard.  We arrived at HM Cafe at around 12.45 to find it full inside, relegating us to seats on the terrace under umbrellas that soon proved to be essential if not 100% effective.  We watched in dismay as the rain got heavier and heavier, reaching an intensity that matched my own recent soaking in Scotland on a ride from Callander to Perth via Loch Earn.  As seats were now available in the cafe we retreated indoors to wait and see.

Over an hour after arriving, we got under way again in light rain with only one intention – back home as fast as possible.  In full rain gear cum personal sauna kit, I was credited with being the talisman that kept the rain away.  Via Follifoot and the Showground, we said our cheerios, having escaped the potential soaking we might have got.  And, thanks to the deep eaves at the cafe our bikes avoided the worst as well.  At c 50 miles, the distance wasn’t “long” in the usual sense but we made up for this by taking advantage of long stays in the cafes. Terry S

Weather forecast was not good, but as yet no thunder and lightning, and no hailstones or floods that some countries have had.

We had ten riders all ready to go, and suggestions were made (we are very democratic). How about Otley was one, this caused some amusement as having been suggested on previous occasions but somehow we never made it (we must get this in before the year ends).

Tancred Hall farm shop for coffee was suggested, we have not been to Easingwold for a while was another. unfortunately the coffee stop was a bit out for Easingwold, so good old Boroughbridge Morrisons Cafe was chosen for all of us, us of mixed abilities and mixed time constraints.

After caffeine and chat decisions were made and the “A” team headed for Easingwold, yes we had rain but not to bad, and after the heat some might say quite refreshing. Dave P

The Wheel Easy “Ride to Brid” is due to take place this coming Sunday, so what was this ride to Brid? Let me explain…….

In September 2009, three Wheel Easy members (Sue Couture, Paul Tindle and myself) accepted an invitation from Sustrans to their volunteer Rangers to participate in a pilot ride of the ‘Way of the Roses’ route from Morecambe to Bridlington. The ‘WotR’ was due to be launched in 2010, but in 2009 Sustrans asked their Rangers to check the proposed route and maps whilst there was still time to make any alterations before the official launch. This ride introduced me to the delights of cycling through the Yorkshire Wolds, an area with delightfully smooth road surfaces, minimal traffic, wide open spaces, an absence of thigh-straining gradients, just gentle undulations – and its almost on our doorstep!

I then wanted to introduce Wheel Easy members to both the WotR and the Yorkshire Wolds and so in July 2010 I organised the first ride from Harrogate to Bridlington – and the first ever Wheel Easy Awayday ride – following the WotR route from York onwards. In fact, 32 long riders cycled all the way to Bridlington, and 12 medium riders cycled the same route to Pocklington. We hired a double-decker bus with a double-decker bike trailer, to bring the 44 riders back from Brid and Pocklington. If you want to read more of the ride, please check out the archived reports for 4 July 2010.

As it a few years since I lasted cycled to Brid, I was keen to join the 2019 ‘Ride to Brid’, but also pondered the possibility of offering an alternative, longer route for anybody wanting a challenge. The normal route to Brid (approx 85 miles) joins the WotR at Great Ouseburn. By joining the WotR at Boroughbridge, and taking a small diversion to Boroughbridge via Scriven and Lingerfield, the route becomes 100 miles. Magic! My suggested route was put to the faster group for next Sunday’s ride, but there were no expressions of interest. So I have now checked out the route by myself.

In summary, I left home at 7.45am, had a leisurely breakfast/coffee stop in York, an even longer lunch stop at the Cranswick Garden Centre (1hr 15 mins waiting for a thunderstorm to finish), and arrived on the Bridlington seafront at 4.50pm. So there was plenty of time to enjoy fish ‘n’ chips by the harbour, before catching the train home. Mr. Garmin tells me I had completed 102 miles in 6hrs 22mins, at an average speed of 15.9mph. The route will be posted onto the Wheel Easy website for the benefit of anybody who fancies a different 100 mile route: one that doesn’t go round in a circle, and one that ends up eating fish ‘n’ chips at the seaside! What a wonderful summer’s day out! Eric W