What a wonderful day for a bike ride and eight others agreed with me. The ride leader had a plan and what a lovely ride it was too, thank you Dennis.

Out via the show ground to Knaresborough then a quick blast along the A59 to the turning to Flaxby. From there it was on roads we’ve not been on for a while to Coneythorpe, Arkendale (where we met Alison and Gordon), Staveley and then up to Burton Leonard and the Mount Garrett estate (where we met John).

Usual route home via Nidd and Ripley. Ripley was busy with the food and drink festival and the scarecrows but we managed to find tea and scones at the castle tea rooms where we met Sarah.  Thanks all, Jill J 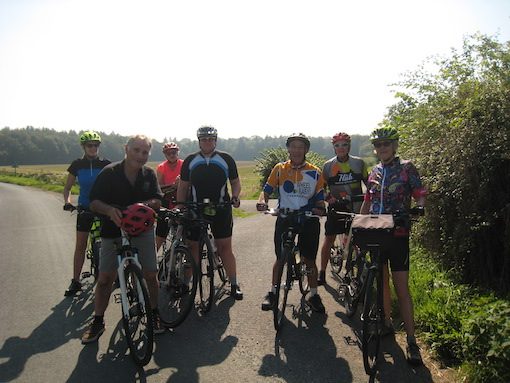 Thirteen takers for the medium ride to Fountains on this lovely summer’s day , including 3 e-bikes: Judy’s, new Peter’s and new-ish David’s. Greenway to Ripley, where Big Dave was waiting for us on his 2-day-old mountain bike. There was a Food and Drink festival on the field next to the cycle path.

Pateley Bridge Road and then right up Scarah Bank towards the no-longer-extant Drovers and then right on to Watergate Road towards Fountains, which was very busy with visitors, but few in the café; the company, refreshments and free coffee were good. Down the Deer Park and right into Ripon (it’s no good, I can’t concentrate as I’m listening to the amazing cricket happenings at Headingley). Across the by-pass to Littlethorpe and Bishop Monkton. We decided to go back through the Mountgarret Estate, but one of our number (Steve?) went straight on when everyone else turned right. Hope he got home OK.

Two intrepid riders went through the ford: Big Dave demonstrating the capabilities of his new bike, and David on his electric bike, which seemed to cope with the potential water ingress. Nidd and Ripley, which was much busier with the festival than it was on the way out. (What a fantastic, almost unbelievable result for England at Headingley). About 32 miles. Joe S. 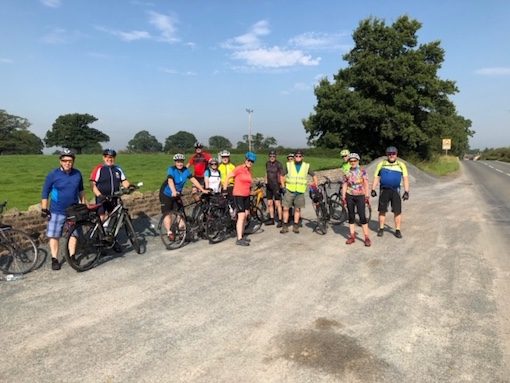 Ten early risers turned up at Hornbeam for an 8.30 start on route 216. We picked up an 11th rider (Martyn) at Farnham and  cycled on virtually traffic-free roads to arrive in Ampleforth for a planned cafe stop. However; Kirk’s cafe was closed and as it was still early it was decided to  press on via Crayke to Tea Hee in Easingwold.

After refreshments we headed for Aldwark Bridge and home -probably the best cycling weather this year and a beautiful scenic route. We also got back around 1.15 so plenty of time to enjoy the rest of the day. 63 Miles, 2900 feet ascent . Julie E 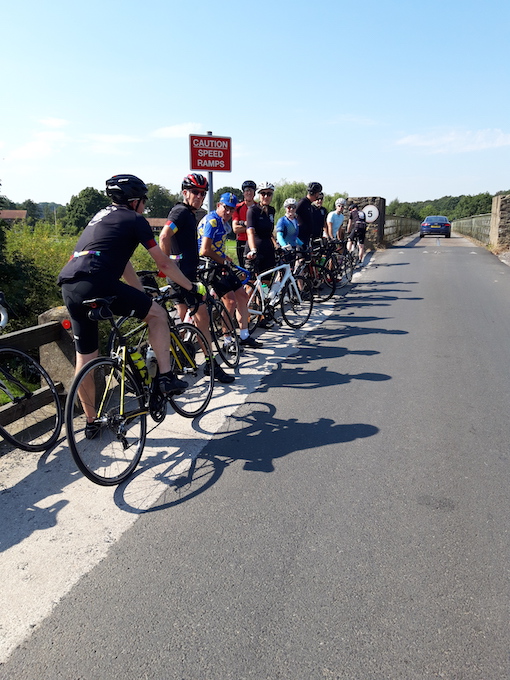 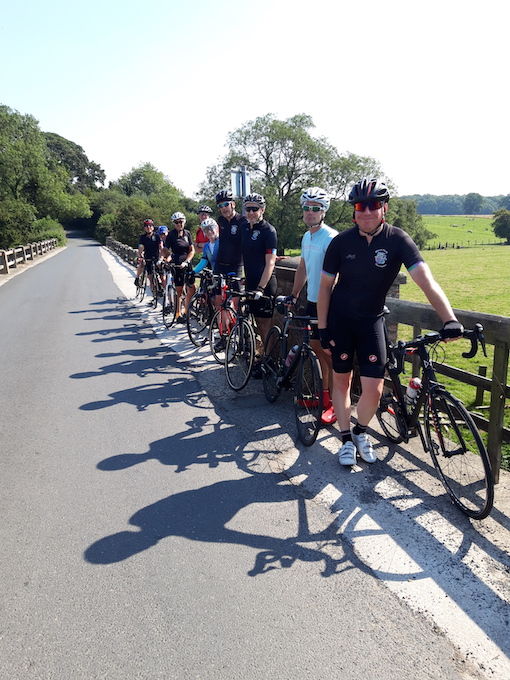 A glorious morning and just five riders up for the Medium Plus steady pace ride to York – Debby, Margaret, Colin, Dave Preston and myself. Good progress was made through Great Ouseburn, Aldwark and Linton-on-Ouse to our coffee stop at Beningbrough Hall Farm Shop. The cafe facilites have been extended and improved with very efficient service, and it was very congenial sitting outside in the sunshine – apart from some rather persistent wasps!

After a short group discussion, Colin and Dave P thought we would easily manage to reach the cafe for lunch at Askham Richard before it closed at 2.30. The route along the river into York was as delightful as ever especially in the sunshine. An added bonus was the smooth cycle path on the railway bridge over the river which has replaced the previous chore of carrying bikes up and down steps. Debby set a good pace to get us quickly to the quieter roads leading to Askham Richard. We were all pretty hot by this stage and welcomed a break inside the cafe.

Suitably refreshed we pedalled on  towards Little Ribston. Dave P followed his own steady pace, Colin left us to go to Knaresborough while the three remaining ladies said goodbye at the Yorkshire Showground. I think everyone was certainly looking forward to a cooling shower after the heat of the day’s ride! About 58 miles. Monica W 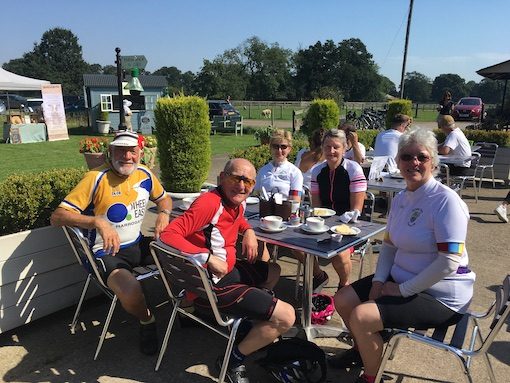 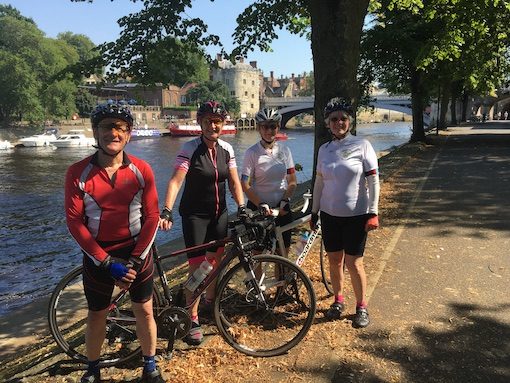 The popularity of the 8.30 ride to Ampleforth meant that there were fewer takers than usual for the 9.30 Medium Plus brisker paced ride this morning. Seven left Hornbeam for the ride to York, but we picked up an eighth rider at Picadilly Motors in Knaresborough and were making good progress when, just after Arkendale, Tim suffered a puncture and the hold up allowed the steady group to smugly sail past.

Back on our way there was some debate about the pros and cons of stopping at the Farm shop at Beningborough or continuing to Cycle Heaven in York. In the end the ride leader prevailed and we carried on towards CH. Alan, who was just with us for a gentle stretch after his Paris-Brest–Paris achievement, peeled off before York, after which the groups split, with some taking the shady riverside route and others the cycle path along the A19.

Unfortunately Tim’s puncture problem reared its head again just before the Scarborough Rail Bridge over the Ouse and we limped on slowly to our Coffee Stop, where a new inner tube could be purchased. The A19 group were by then tucking into their food. Puncture sorted and refreshed we started our journey back on what was becoming a scorcher of a day.

Glyn left us before Askham Richard and it then became a steady flat grind in the heat towards the lumps and bumps that surround Harrogate. Water supplies were pretty well exhausted by the time we got back and we remarked on the need to keep well hydrated on such a day. Dave W. 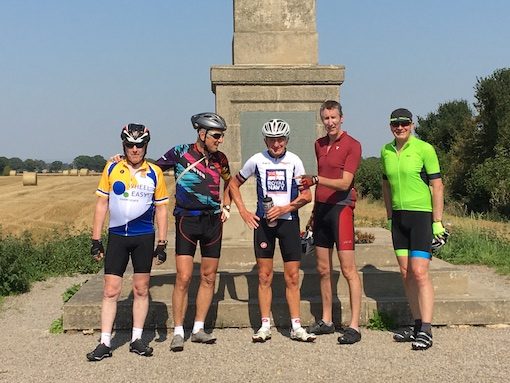 Seven left Hornbeam on the long ride, with John H joining at Boroughbridge.  The pace was steady to our first stop at Thirsk, in anticipation of the heat taking a toll later on.

After Borrowby we left the flat lands behind and reached the wonderful, but definitely not flat, road from Osmotherley to Hawnby.  Regular re-grouping wherever shade was available was the order of the day.  We stopped at Hawnby post office rather than risk being too late at the gliding club.  The garden was too hot for most, so we fuelled indoors where the stone floor toned down the heat a bit.

Next up was the climb of Murton Bank, then down White Horse Bank and back to the flat lands from Easingwold (buoyed by having heard the test match result). Mike, Peter and Dave headed for Whixley after Aldwark Bridge and John headed back to Boroughbridge through the Dunsforths. James pressed on alone while Dan, Mike W and I sought out further water supplies at the Bluebell at Arkendale.

A long hot day on unfamiliar roads for many of the group and I think we had all had quite sufficient sun after around 88 miles. Richard L 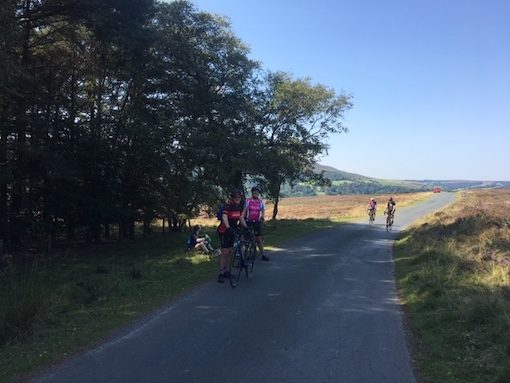 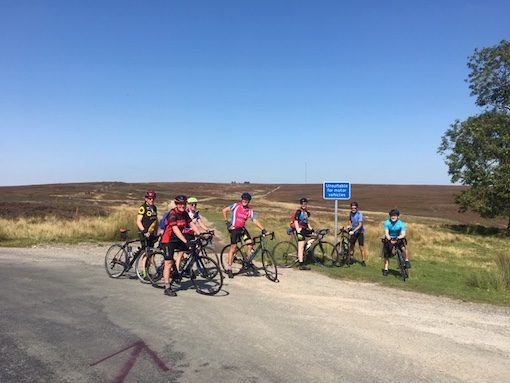 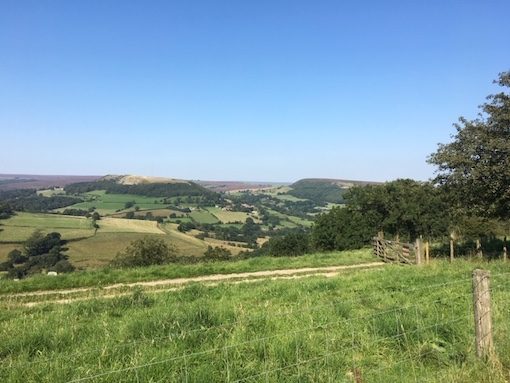