The back garden seemed warm and summery this morning….so full of anticipation and glee arrived at Hornbeam and found there were a few riders wanting a short gentle ride to Stainburn and the Pool farm shop cafe. We set off and arrived at the top of Norwood Lane….for some of us eventually.   Surjon abandoned us for household chores and we continued through the forest and onto Pool farm shop where we were meeting Jen.  We had been in there only enough time to settle ourselves in, when the Wednesday Riders who had obviously cycled round the whole of Yorkshire to get there, arrived.  After a rather heavy scone, I had lost the will for hills and 8 abandoned to follow the quick flat main road straight back home.  Monica, Rachel, Bridget, Jeanie and electric Judith chose the scenic route along the river to Dunkeswick and Kirby Overblow and no doubt would be home way before me…. slow was not really part of their vocabulary.   I understand they all arrived home safely…but perhaps noisily (Monica s bike).  So, a grey coldish ride of no idea how many miles as my odometer dropped off somewhere between Stainburn forest and the T junction to Otley or Pool. CG

This was billed as my favourite ride and it didn’t disappoint today. We started with around 24 riders from Hornbeam and arrived back at Ripley with 18. The rest left us early. Everyone organised themselves into groups with gaps. I led and Liz F and Liz P made sure that no-one got lost – many thanks to them both.  The weather was great for this hilly ride – nice and cool and it was dry. A little sunshine would have just finished off a lovely morning in the Dales. The daffodils were everywhere and the cherry blossom was glorious.

There were some great downhills which needed some climbing in the first place. We all enjoyed the long run down from Brimham Rocks past Rabbit Hill Farm and back to Ripley via Scarah Bank.  We decided to see if the cafe at Brimham Rocks Adventure Farm could cope with such a large group. The food was great, well priced and served with a smile – it came quickly too. Definitely on my list of places to stop.

We were back before 2pm having done 32 miles and around 770 metres of climbing.  Thank you all for your company and indulging me on my favourite ride.  Steve W 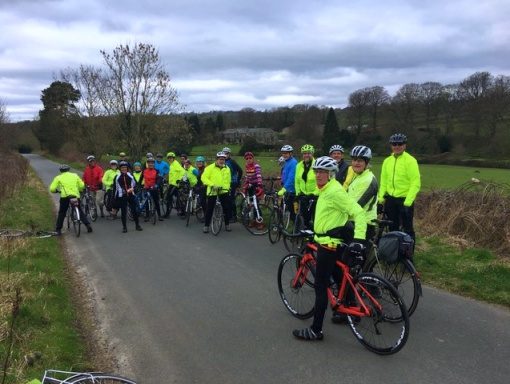 On a cooler morning than anticipated 13 riders set off to venture into West Yorkshire. There was a need to split into two groups and Janet, who knows the area well, lead the faster riders out towards Kirby Overblow followed by the ‘steady’ group.  We lost John fairly soon as he sped off to Wetherby and James followed him as he had an early afternoon engagement which meant he needed to be back early.

We then negotiated the short stretch of the A61 to Harewood Bridge and set off to climb Weardley Bank which ensured we all spread out and warmed us!  We were joined at the top by Sara who had cycled from home and we set off to Bramhope and then on to the Cheerful Chilli for refreshments.  Our hopes were dashed as poor pre-planning (by me) hadn’t discovered it was only open at the weekends.

The faster group had gone on ahead and were ensconced in the Bloomfield Square cafe so we, thinking it would be full, set off to Pool and the Farm Shop where we met the Poddling Group who were enjoying their well-earned break.  We had a leisurely stop as they were understaffed (but apologetic) and then we prepared to head off.  Paul and Gia headed straight back and Sara headed home with the climb of Weardley Bank in prospect whilst the four left (or were they remainers?)  in the steady group set off for Castley and then home. We crossed the A61 again and climbed up to Kirby Overblow where the short route home via Pannal was opted for.

A good ride where we managed to reduce the group as we went along! Thanks to Janet for helping me with the route and the faster group. 35 miles with some climbing and a decent ride on a cold day.  Kevin 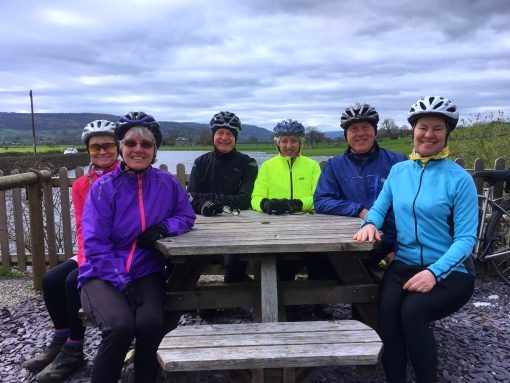 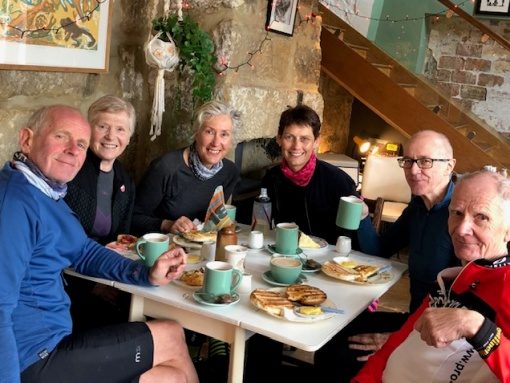 The Long Ride decided to go to the Glider Club at the top of Sutton Bank.  Leaving Harrogate by way of Knaresborough, and Boroughbridge we made our way to Kilburn and then to the foot of White Horse Bank.  After the usual struggle up the bank and after partaking of refreshments at the Glider Club we swooped down Sutton Bank and made our way back to Harrogate via Cundall, Norton-Le-Clay and Boroughbridge.  PCJ 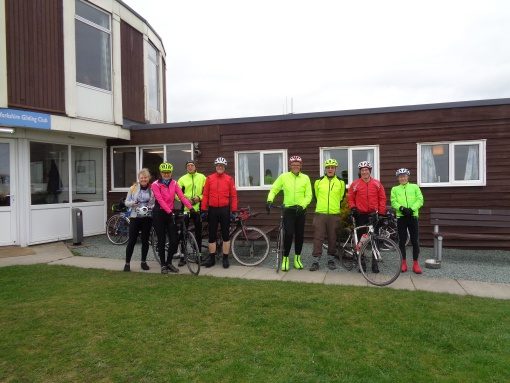 The day started with a phone call from Norman, to say Theo was coming out to ride, Norman was picking him up at his house along with Bill and they were heading for Wetherby, and where else but Morrisons by the shortest route.  A text from Eric told that he was on an awayday in Hawes with Di.

Dave P headed to Low Bridge to check out the “A” team, today it consisted of Dave Wilson, Dave Siswick, Geoff and Richard, who were heading in a northerly direction, away went DP to meet up with Dave Watson, a quick chat then away he went to catch up with the “A” team (nearly had a full set of Dave`s out today).  DP headed for Cowthorpe, Rudgate, Walton and in to Wetherby via the cycle track and in to Morrison`s where Bill, Norman and Theo were sitting relaxed enjoying the tea and the ambiance.

Nice to see Theo out on his bike and a good opportunity to wish each other “happy new year”. the topics of conversation were wide and varied, but it was noted that because Morrison`s had plenty of room it was handy if any of us Old Un`s had a “funny turn” we could lie on our backs with our feet in the air till we recovered.  Then it was North via the cycle track to take a left at the Cowthorpe turnoff and into Knaresborough via Waterside, we were led in by Theo (despite him saying how slow he was) with that superb cadence of his, from riding many years on fixed wheel, then up the Beryl Burton track and home.

A nice little ride and a few comments on buying electric bikes, and why not.  Dave P . 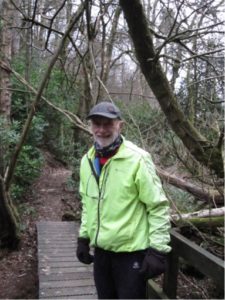 Just me and Peter today for a relaxing ride round Brimham and Fountains. 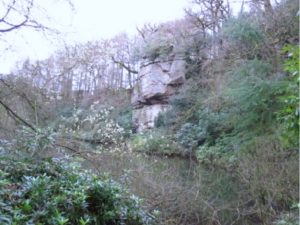 Lots of quiet tracks and not up to the axles in mud at all. Not completely without incident, we came across about a dozen loose cows who set off down the road towards Burnt Yates….then they thought better of it and went back up the track they had come down (which was where we were going) so we followed them up the track and found a rather relieved farmer.And we went to Eavestone Lake, because we could, and because neither of us had been there before.   Colin