On a lovely bright and chilly March morning there was a good turnout of 13 riders to join us for the short ride. We set off along the stray, down Claro Road, and followed the Greenway as far as Bilton Lane where we turned down the Beryl Burton way to Knaresborough. Leaving the traffic behind at Knaresborough we made our way to Farnham and then on to Copgrove and Burton Leonard. On such a cool clear day with a strong wind the views were superb and everyone enjoyed the spring sunshine and the green fields with many lambs about. At Burton Leonard we turn down the gravel track to the ford where we posed for a photograph before continuing on through the Mount Garrett estate and eventually joining the A61 for a short way through to Ripley tearoom stop. Over coffee, tea cakes and bacon butties the conversation turned to such light matters as the first book of Solomon in the Old Testament where we were enlightened by Paul on the interesting sections relating to the diseases which were given to the Philistines! We were astonished to discover that a plague of haemorrhoids was descended upon the Philistines for being naughty and stealing the Ark of the Covenant and not giving it back. Somehow the haemorrhoids were turned to gold, but by this time I was laughing so much I lost the plot.  Anyway, Geraldine looked it all up on Google. One of Photos shows exhibit No1 – a golden haemorrhoid! This highly academic conversation rather descended into the realms of “they got what?!!” so we thought it was time to go home.  Martin W 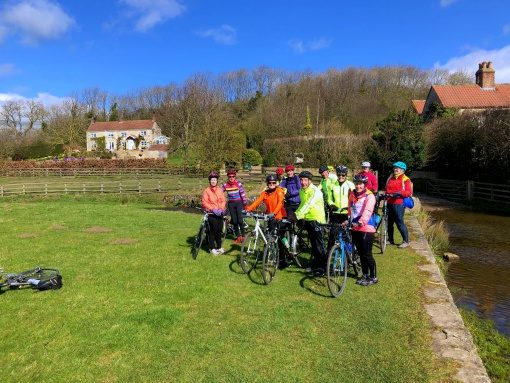 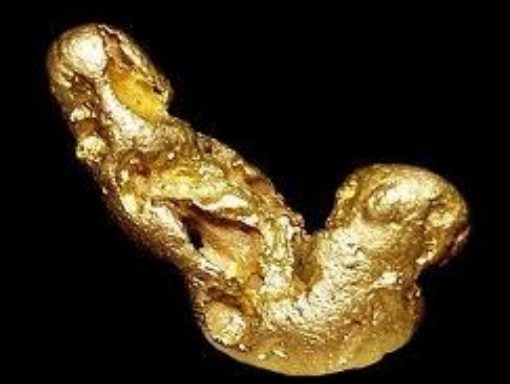 Seven takers for the medium ride at Hornbeam, including newcomer Jim (our only Jim, I think?). The weather looked promising, but the forecast said 19 – 20 mph westerly winds in the afternoon, and the route on the website would have had us cycling uphill into it on the busy B6265, so we reversed the route. As Geraldine was with the short ride today, Alison N kindly offered to back-mark. Through the town centre and along the ASDA cycle path and the Greenway to Ripley, where Big Dave joined us, making eight. Most noteworthy was the fact that newcomer Jim had brought along some jolly good chocolate flapjack which he generously distributed among us. (This is a welcome act, which newcomers from now on should note well …). Brian seemed to want to follow the prescribed route through Birstwith, Hartwith Mill and Stripe Lane, but we went up to Burn Yates and then right towards Winsley. The headwind was beginning to make itself felt as we met Dave Preston coming the other way down towards Burnt Yates. Alison monitored our group discipline from her position at the back, and found it wanting at times, but with a bit of reinforcing, it improved. Lots of people were visiting Brimham Rocks, and a there must have been a Jaguar rally, as dozens of them came along towards Brimham from the north. As we reached the junction with the B6265, Brian agreed to take us on a little detour through Sawley to mininize the time spent on the busy B6265. Coffee at G&T’s, where the group photo was taken. One of our group left us there, and the rest of us returned on the prescribed route on Low Gate Lane, Watergate Lane and down Scarah Bank to Ripley and back along the Greenway. At Dragon Bridge, Jim distributed a second helping of chocolate flapjack. Good man.  About 32 miles. Joe 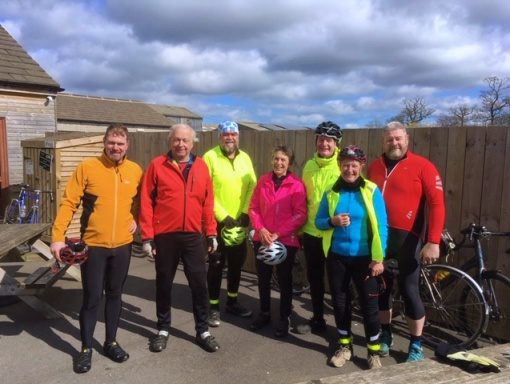 The promise of perfect spring riding brought sufficient numbers for three groups to set off for Easingwold and my eleven strong cohort made speedy progress to the Curious Table.  I’m not sure if we looked a bit scary or just plain desperate, but we managed to see off enough existing customers to provide seating for everyone within a couple of minutes of arriving.  Either way, the break was very welcome.  It’s a good job most of us went for the slightly larger snack option as we needed all the strength we could muster to battle against the strong, gusty wind on the return journey.  However, we were rewarded with stunning spring scenery, bright sunshine and fantastic views of the White Horse at Kilburn. It may have been a flat route, but we all had tired legs as we assembled at the top of Knaresborough hill – why is that hill such a killer?  Great ride folks.  Helen B 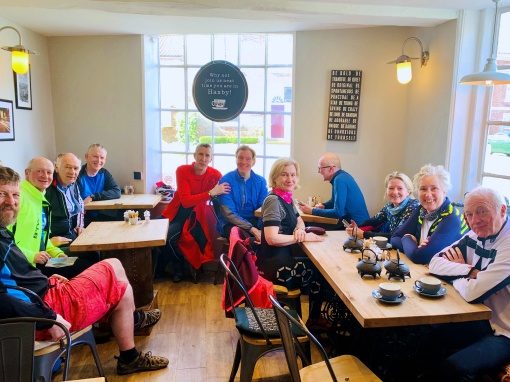 We were maybe the third group setting off to Easingwold with the wind behind that propelled us there nice and early. Kevin and Jill raced on ahead to secure a table at Curious Table and we enjoyed the usual good fare and coffee. The return was more of a mission and thanks to James, Kevin and Peter for taking the brunt of the wind for us which meant we were not quite crying by the time we got to the top of the hill the other side of Knaresborough. An excellent ride on a sunny but blustery day and we even threw in a slight diversion but cobbled together about 54 miles. A good training ride! Gia 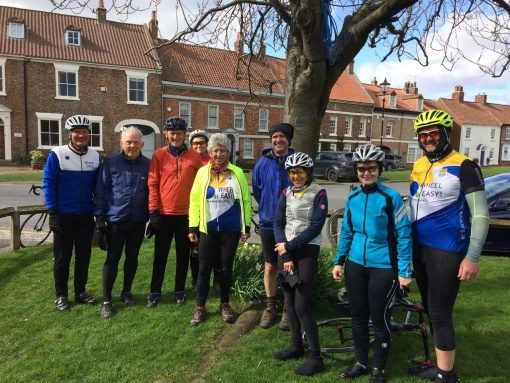 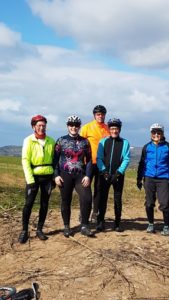 There was a large number of people going on the Medium Plus ride today as it was quite a good forecast apart from being windy. Helen led the first group, followed by Gia and James leading the second group and I was left with a select six, Liz F, Liz P, Mike W, Becky, Justin and Colin. The route took us to Low Bridge, through Knaresborough and up to Farnham. Then on to Aldwark Bridge with the friendly gentleman at the toll gate wishing us a good ride. A right turn notion to go via Beningbrough caused slight confusion as it was too early for lunch and it was decided it was best to push on to Easingwold. Arriving there all the previous groups’ cyclists and various other cyclists were ensconced in the Curious café, so no room for us, we went over to TeaHee Expresso café. Fantastic drinks, posh tea, sausage and bacon with egg buffers built like doorsteps served and consumed with delight. Mike got a free egg with his sausage. It was so relaxing we chatted about Becky’s upcoming 100 plus miles charity cycle ride for a mental health charity, world affairs, Crimplene flair trousers which Colin wore, it was not disclosed if they caused chaffing!! Time flew by and we realised that we needed to move on, outside all cycles and cyclists had disappeared and the select six were alone. Up Spring street on to Church Hill where we stopped to look at the White Horse. A lovely climbing route along the ridge took us towards Coxwold, before we dropped down to Husthwaite. A very close view of the White Horse in spring sunshine a wonderful view to stop and admire. The wind began to blow vigorously and it was heads down cycling hard feeling like battered fish, cycling towards Boroughbridge. Unfortunately trying to avoid the potholes Becky hit a pothole causing a puncture. It took all Mike’s ingenuity and brute strength to repair with Becky the apprentice, plus a various array of tools from Justin (new tyre levers) Colin’s magic tyre gripper, Liz P with jelly babies and advice it was soon repaired. The wind was now blowing strongly again and spots of rain fell as the sky darkened as the group with repaired tyre set off. At Boroughbridge the group headed to Roecliffe, Burton Lenard, over the ford at Mount Garrett. The weather remained dry and we soon reached Nidd, then along the lane to the Ripon Road, down in to Ripley and along the Greenway back to Harrogate. A ride of 60 Yorkshire miles, wonderful company and we will certainly miss our Justin when he leaves for pastures new. Liz F 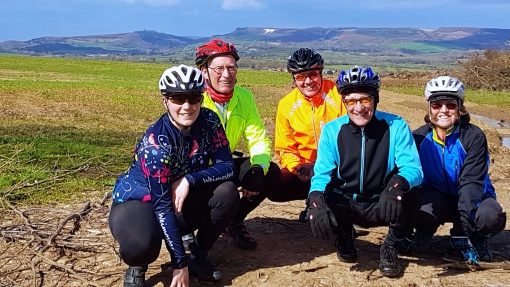 On a dry cool Sunny Sunday, we all departed from Hornbeam heading out to Easingwold and the surrounding countryside quickly finding the back route via Starbeck down to Knaresborough.  Martyn on his smart new Stealth bike built by his fair hand.

The pace was brisk more aided by a tail wind we soon reached Arkendale and up Marton lane. Mark and Darcy leading down past the now happy village of Marton-cum-Grafton having won their battle against the proposed building of a large Sugar beet plant nearby. Having cleared Gt Ouseburn, we passed a couple of lone tourers on their trusty old steel bikes turning down Boat lane to the Aldwark bridge all waved through….no waiting today!  All settled into a nice wind on the back pace all seemed resigned to a slog back home. So on reaching Easingwold tucked in against the Howardian Hills with its colourful history having seen the Danes and Anglo Saxons settled the place was also caught up in a dispute between  the Edward 1st  and the 2nd Earl of Lancaster at the Battle of Boroughbridge in 1322 which saw the latter’s execution, no such problems today though as we opted to try a new cafe called the Olive Branch with on-site “rack” parking and large sun catching windows we could drink, eat and bike watch we were soon joined by the Moonglu ride from Ripon filling the place with bikers and bringing a couple of smart Ti bikes to.

Onwards we set of for Husthwaite  with the wind now making its presence felt passing through the village via The Nookin…(well it tickles me!) and out towards the A61 via the Amplecarr road then quickly turning off for Raskelf and our homeward stretch over the East-coast line and into the wind all taking a stint at the front we reached Thornton bridge and after a steady pace we reached Boroughbridge.  By the time we reached Staveley we had caught up with another group led by a lady on a rather fancy bright Pink Colnago all equally scattered by the wind. On reaching Knaresborough I peeled of and left the lovely Knaresborough hill for tired legs.  A great ride on a bright spring day.  Tony P

Four decided that a north-south route would avoid a long slog home into the wind, so we headed for How Stean. As it turned out, it was a long slog into the wind to How Stean.  Along the way we admired the hand rails on Darley bridge, designed by Peter Roberts 54 years ago!
Over lunch Martin explained a cunning way to reset a Garmin to its original factory settings, which seems to cure many ills.  The return down the valley was turbo-charged by a strong tailwind, so much so that an ambitious plan was hatched to ascend the dreaded Wath Lane to enjoy more homeward assistance via Dallowgill Moor, Grantley, Sawley, Pheasant Alley and Fountains.
Overall 55 miles, quite a lot of up and a pesky, cold wind.  Richard Leake 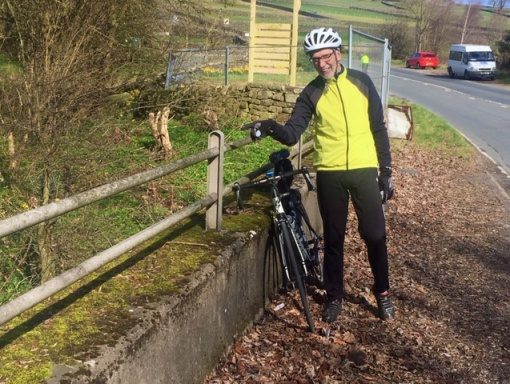 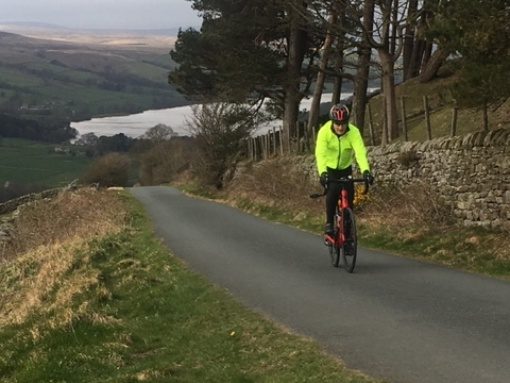