There were 8 riders for this ride in cool but bright and dry day. Some last-minute changes to the intended route were necessary to accommodate a trailer bike and child, then we set off round the showground thro’ Stonefall Park up Forest Lane and Bogs Lane joining the cycleway to Bilton and following the greenway to Ripley. We skirted the park through Hollybank Wood up to Clint and down into Hampsthwaite for a coffee in the café. The return journey took in Lund Lane, Knox via Spruisty Bridge then Hill Top Bilton picking up cycle links to Claro Road and then home from The Stray. 18 miles easy-going, back for 1 pm… PB 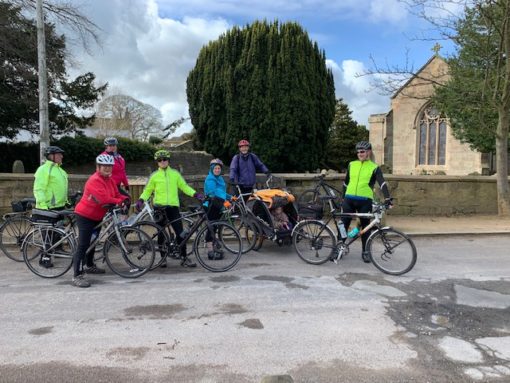 With the outlook saying ‘cold’, 10 hardy souls set off from Hornbeam and before we knew it, we had become 12 at Low Bridge. The sun shone on the righteous and the temperature fluctuated between warm and chilly. We briefly stopped to offer assistance to a couple of time triallists who had need of an Allen key (and who were soon back chasing each other down the lanes). The route took us through some familiar territory and before long the talk was of where to partake. We agreed on Plenty Boroughbridge as a halfway stop but by Burton Leonard our numbers had thinned and we said goodbye to an EG at the cafe stop who was making brisker pace than us.  After a very hospitable break in the back room of Plenty we set off through Aldborough, the Dunsforths (quiet as you go) and Great Ouseburn where the River Ure mysteriously becomes the River Ouse.  Wending our way back to Knaresborough we began to go our various ways but thanks to everyone for your company and excellent traffic management.  Dave M 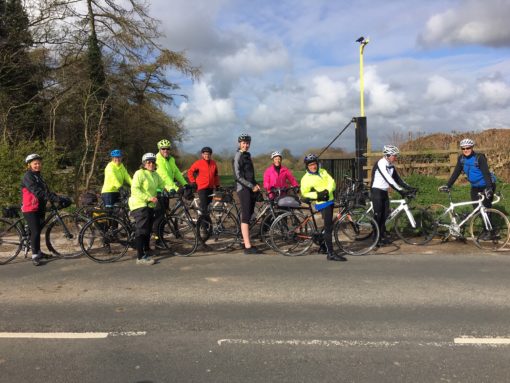 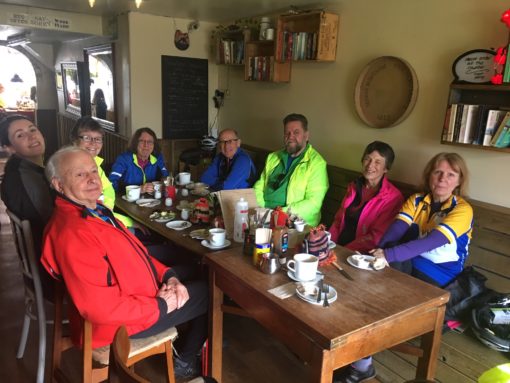 Happy Mother’s Day to all you mother’s out there. There were three on our ride (mother’s that is) and I had cycled to Hornbeam from Bramhope as I was on a time card for a promised dinner. Seven of us made speedy progress over little Almscliffe, down Norwood Edge,over Lindley reservoir and through the housing estate onto the back road to Ilkley. A short stop at the Lido allowed for ‘clothing adjustments’ and the all important refueling with jelly beans,jelly babies and M&M’s. I was trialling M&M’s for their suitability in my back pocket and they seemed to have passed the test – still edible. We all made it up the Cow and Calf, although I have to say ‘it’s a beast’! We had decided to push onto Menston for our cafe stop but unfortunately the last table had been taken so we pushed on further to The Cheerful Chilli. By that point Julie was desperate for a cup of tea- as was everyone else. I peeled off back to Bramhope and Helen led the rest of the group back to Harrogate down through Otley, over to Pool, Kirby Overblow and home. Excellent ride – thank you all for your company. I recorded 42 miles and over 3,500 feet of climbing. 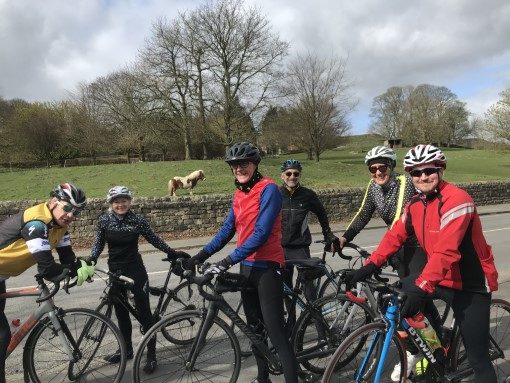 It was a chilly but bright start and there were enough medium plussers to need three groups.  Once the very fast boys and girls had disappeared over the horizon, I took Monica W, Liz F, David S, Chris R, Declan and Rob.  This was a route I have not done for so many years I actually could not remember ever having ridden up the Cow and Calf.  Nobody else was admitting to knowing the route either but, fortunately Chris had also had the foresight to put it on his Garmin and volunteered to be back marker so, had anything gone wrong, I now had somebody to blame.

After exiting Harrogate, it was nice, for a change to take the Lindley Wood Reservoir route to Otley and Ilkley with warm sunshine and great views all the way over.  We headed straight for the Station Cafe, which is one of my favourites, and were lucky enough to get a table in the warmth of the inside.  We enjoyed an excellent lunch, despite the total lack of beans on toast on the menu and were treated to the rare sight of Dave S eating a bacon sandwich!  Rob disappeared at this point.  He had a pass-out for the whole day and was heading off to do something involving the Langbar Loop.

We were then into unknown territory.  However, if that British Airways pilot can land at Edinburgh, in the mistaken belief he was heading for Dusseldorf, I didn’t feel too bad about feeling a bit bewildered between Ilkley and Bramhope.  We took a steady pace after the cafe stop as it was an immediate long, steep climb and nobody wanted their lunch to precede them over the Cow and Calf.  The roads became noticeably busier between Menston and Bramhope, with some questionable overtaking skills in evidence but the views in all directions were magnificent and Leeds Bradford Airport looked busy too.

Once we got to Pool, we were on familiar territory home, with visibly tiring legs, as we ticked off Castley, Weeton, Kirby Overblow, Rudding Park and Home.  A most enjoyable day out in great company and huge thanks to Chris R for helping out at the back, middle and front and I managed to get the whole team safely back to Dusseldorf before 3.30 p.m. 47 miles, according to Garmin.  Helen T 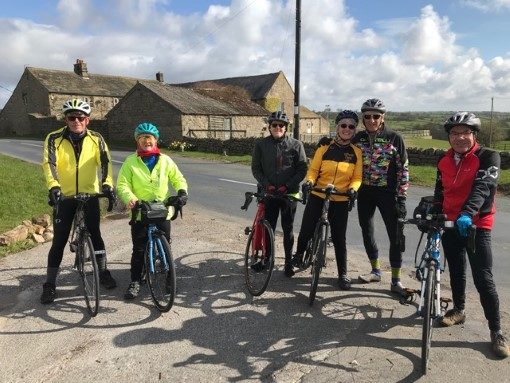 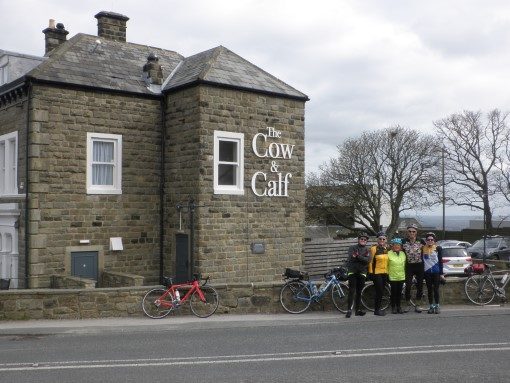 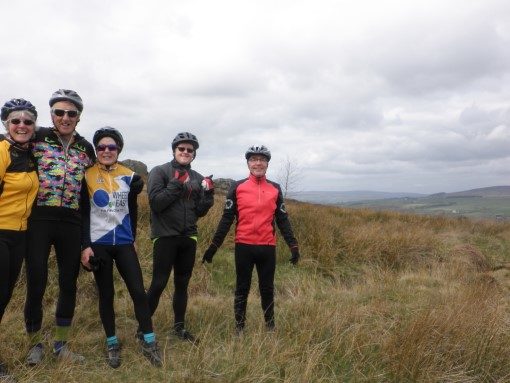 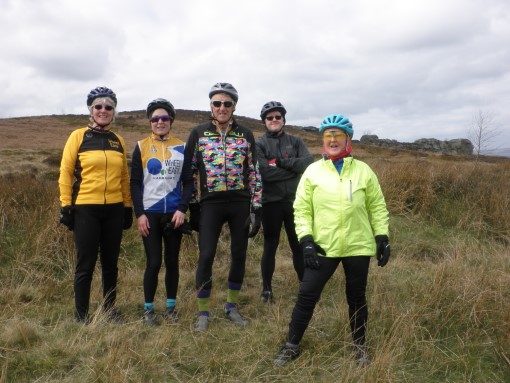 Only five riders formed the fast group to attempt today’s ride.  Everything was going smoothly until we left Beckwithshaw where two riders went of piste down Shaw Lane whilst the others carried straight on.  Apparently, this was caused by a lack of communication.  Returning to the advertised route we headed for Norwood and Farnley at which point one of the riders opted out.  Everything was back on course when we arrived in Ilkley, here Mark explained his cunning plan.  The plan was not to stop at Ilkley for refreshments so as to avoid doing the Cow and Calf on a full stomach and then head for The Pantry at Menston.  We then battled up the Cow and Calf into a biting easterly wind.  Arriving in Menston The Pantry was full i.e. nowhere to sit.  So, after taking a Meaningful Vote it was decided to head to Otley by the quickest route.  We stopped at The Milk Bar on Manor Square, very good service and food, to be recommended.  After another Meaningful Vote it was decided to get back en route by the most direct means.  This entailed climbing up East Chevin Road, on a full stomach.  Arriving at York Gate we now followed the advertised route back to Harrogate.  Despite all the deviations some of us where in time to watch the footie on the TV.  PCJ 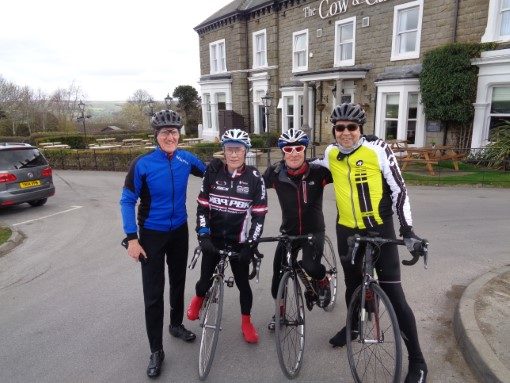