A good turn out today resulting in three groups being formed. Under the leadership of Mike W. Ten of us set off at a brisker pace on Angela’s well-chosen route. We lost Tim before Pannal as he sped up the road missing the turn. Ploughing on to Follifoot, Spofforth picking Al up at Little Ribston. Left to Cowthorpe right to Walton and on to Boston Spa. As we were the first to arrive at Wise, we got the best seats and the pick of the treats. Mike pushed his authority by taking the last tea-cake leaving three of us having to make a further decision. Life isn’t easy you know! We then had to decide on our onward route. Al and Brian wanted a few more miles in their legs and headed for Tadcaster while the rest of us wanted to get home to see the Elite Men’s Time Trial finish. So, we seven set of round Clifford and then up to Wetherby where I left them to get home to Knaresborough. The rest headed for Sicklinghall. Mike P caught me just after Little Ribston (he also lives in Knaresborough) and didn’t fancy the ‘drag’ up to Kirby Overblow. A good ride, 34 miles ‘ish, good weather and as ever great company. Thanks. Colin B 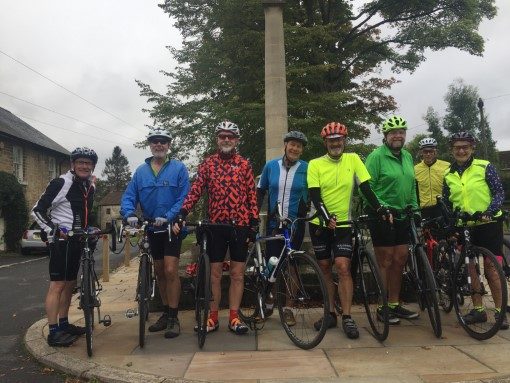 A group of six Wanderers riders were the middle group leaving Hornbeam this morning to follow Angela’s ride.  However as we were about to leave Little Ribston a lovely lady outside the Village Hall tempted us in with the promise of coffee and cake for £2. We succumbed and were not disappointed! The cakes were wonderful and our coffee cups were refilled. Apparently this occurs once a month. David did try to flag down Angela’s group but they didn’t see us. We did manage to deviate from the route when we missed the turning to Walton and then Steve and Sur John left us to head straight to Wetherby. So by the time we arrived at Wise café in Boston Spa the 1st group were about to leave and Angela’s group were being served outside. Forgoing smoked salmon sandwiches and other goodies we decided to keep going and had a lovely and uneventful ride back into Harrogate via Kirkby Overblow. 36miles, 2000 ft. Liz P 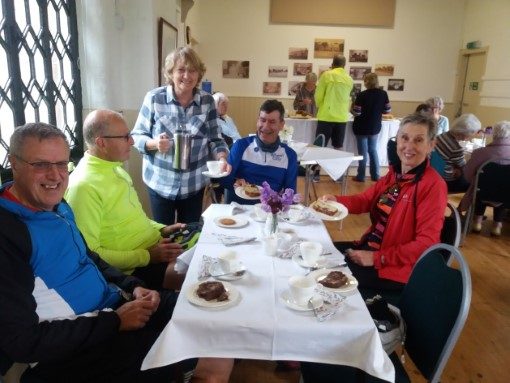 A good number of Wanderers turned up at Hornbeam, despite the excitement of the UCI racing later in the day. We divided into three groups and sped on our way. Group 3 ended up with additions and subtractions and our trusty back marker gave up counting! We were in hot pursuit of Group 2 and then lost them, only to discover later that they had been hijacked in Little Ribston, taken into the village hall and plied with coffee and cake. How did we miss that?? It became apparent that two of our speedy hill climbers had a little electronic help which gave cause for consideration (for some of us!). We all eventually congregated at the Wise Owl in Boston Spa and enjoyed chatting to some other riders who had come to watch the racing. I remembered to take a photo as I left the group, and trusted they found their way back to Hornbeam. A lovely ride in a special cycling week.  Angela Rickards 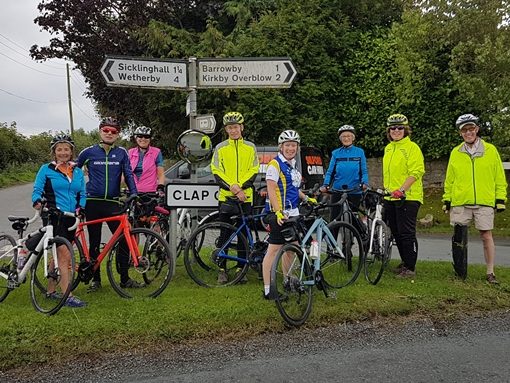 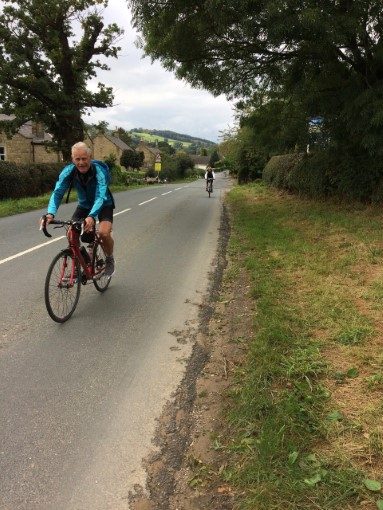 Wednesday Ride today was partly to showcase our great countryside and routes as my sister from London was visiting with her Dutch partner. Our first excitement of the day was finding a fallen tree at the Killinghall Bridge end of the Greenway. Attempts to shift it was abandoned but we strategically placed two red cones and called Malcolm to alert someone to get it removed. Very efficiently we heard that someone had been with chainsaw to remove the obstruction.
Lots of cyclists were out today, visiting cyclists, the GB men’s team, lots of local cyclists and later in the day lots of commuters on their bikes.
We stopped for coffee at Fountains then headed towards Sawley and Sawley Moor Lane to Brimham Rocks. There Dave R left us for Pateley and Yorke Folly and we carried on towards Hartwith toll bridge, Birstwith and Clint Bank.
We met Malcolm in Ripley where we had lunch outside at the Boar’s Head. Excellent and great service. At the bar we met a very famous local cyclist’s mum, that was nice. By this time the sun was out and we joined a group at the roundabout to watch the time trial coming through. Here we joined Theo who knew exactly what was going on and Dave and Norman. Home via the Greenway and a visit to Spa to fix an annoying squeak (which they did!) and a visit to Beryl Burton and Knaresborough.
All in all a good day to show our visitors some of our favourite routes and they were not disappointed. Thanks everyone for the ride, the routes and the company. Gia 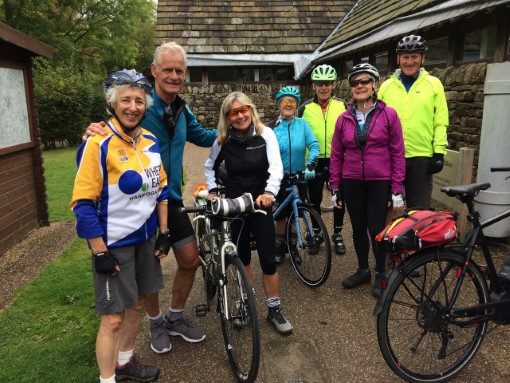 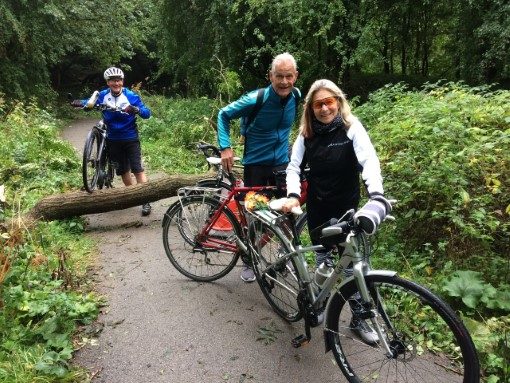 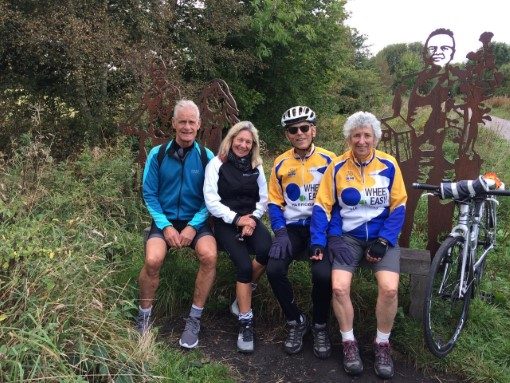 Briskly to the outskirts of Bedale, where we noted that we shouldn’t cross the route of the ITT otherwise a really long ride would follow!

Retreated to Exelby Deli Cafe and found good coffee and teacakes – a recommended venue. It really is open despite looks to contrary.

Group decided to lunch at Thorp Perrow after visiting art installation at Snape Castle Chapel – hurry as it closes this weekend.

Then to Grewelthorpe to watch last 20 ITT riders go through, followed by a rain-avoiding dash to Ripon (successful!).

Buzzed by Moonglu peloton – do they have to? Long streams of traffic coming to Ripon after the roads were re-opened.

Group split at Lark Lane Ripon to make their ways home by diverse routes but mainly via Knaresborough.  All safe.

The day started well at Low Bridge, the weather being much better than originally forecast and it was to get even better.  Chris B arrived looking like he was kitted out for a world tour, but he was very secretive about what he was carrying. At the end of the Greenway in Ripley we headed towards Bedlam on the B6165 but took the right up the hill and in the layby at the top all was revealed “a proper picnic” with an international flavour, we had Pain et Fromage with Welsh Cakes and “bubbly”, so it was Vite, Vite, Yakki Dah, and Hic.

The “A” team then headed towards the Ripon area, the “B” team comprising Dave P, Norman and Theo headed for Bishop Thornton and beyond to swing round in a loop to Shaw Mills, Bedlam and back to Ripley for coffee and homemade cake in  Ripley Church, perhaps we had lost our appetite and found a donkeys. Then it was back to the Ripley, Ripon side, roundabout to watch the men`s time trials.

The arrival times seemed to indicate that there may have been problems for some riders.  We were later joined by Gia, James and Malcolm M. The Belgium star studded National team caused a stir and a photo frenzy while spending some time at this roundabout.  Eventually it was back to Ripley for the “B” team and more coffee.

A great day out, many thanks Chris B, only one slight problem (and you cannot have it all) an Otley Road resident missed the national teams practicing on the Otley Road circuit.  Dave P

Nick and I pottered off from the alfresco elevenses up to Brimham and back again onto the Greenway. The whole area was buzzing with cyclist and there was excitement in the air.

A pleasant hour was spent over a cup of tea in Nick’s back garden in Autumnal warmth playing with his dog before leaving for home. A gentle and pleasant day with gratitude to Mrs B for the excellent repast.   Dave S.