We had eight riders at Low Bridge and our first coffee stop was to be Spa Gardens Cafe in Ripon, picking up Dave Watson on the way.
With only nine riders the freewheel downhill competition was held this was keenly contested by three riders with only a half wheel between them.
Was it all about Technique, Weight or Tyre Pressure ? we all had our own theories.
Then before we knew it the “creeping sprint” had developed to Ripon, one EG who was old enough to know better got drawn in and arrived at the cafe in dire need of a caffeine and calories injection.
The whole group sat out in the sun amongst the poppy decorations ( see photos) and some VEG`s told of their memories of WW2.
A short tour of Ripon was made finishing at the Cathedral, the Bill W Dave Watson and Norman headed for home, with Chris, Colin, Dave P, Dave S, Eric and Geoff heading for Wath, Melmerby, Asenby, Norton–le-Clay and Morrision`s cafe in Boroughbridge at the same time as York Wednesday Wheelers containing old friends like Keith and Anne Benton.
Again caffeine and calories and lots of good chat before heading for home.
Excellent riding conditions though the wind was sometimes a bit temperamental but remember the clocks go back soon and then our mileages tend to drop. Dave P 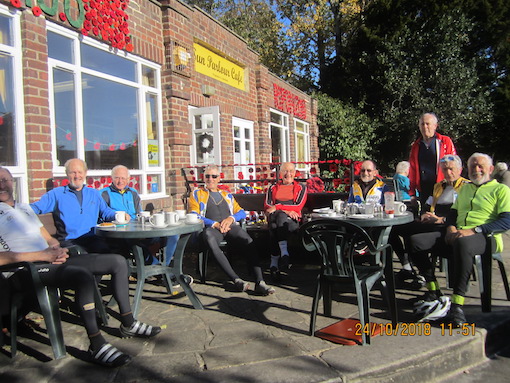 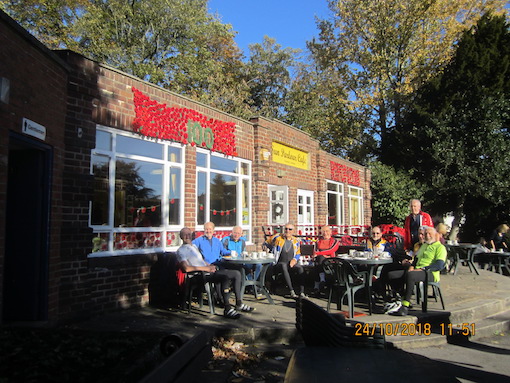 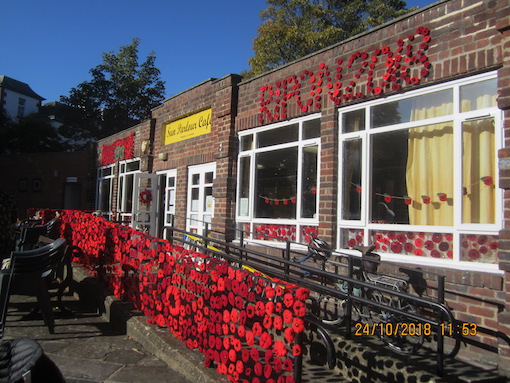 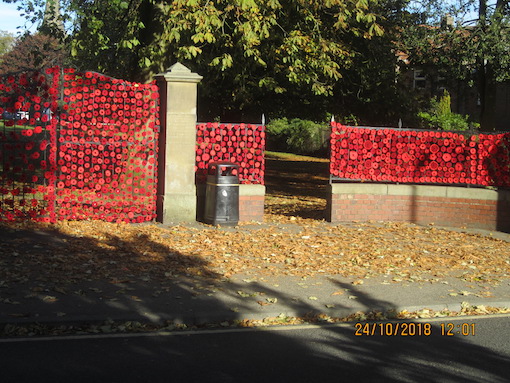 The cunning plan was to ride into 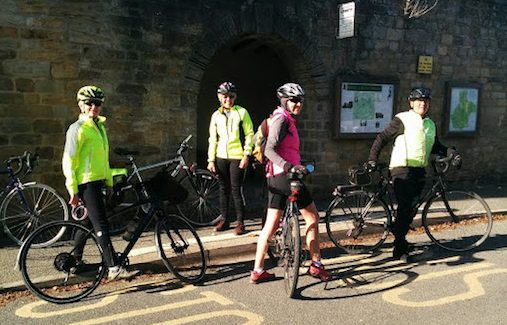 the wind on the way out, and then have the wind behind us on the way back! So I set off with Monica, Liz and Karen. At the traffic lights by M & S a lone voice shouted, “You didn’t go into the top carpark as James told you to!!!”Whoops sorry Paul B.”I didn’t realised you wanted to come with us”. So now there were 5 of us battling the wind through Beckwithshaw and up to Little Almscliffe. Across Stainburn forest the views were spectacular, and we enjoyed swooping down to the cafe at the bottom of Poole Bank. The wind was behind us for some parts of the ride through Castley, Weeton and Dunkeswick, but riding up the hill to Kirby Overblow seemed like hard work. After our photo shoot we rode down and up to the A658, whereupon Paul had a cunning plan up his sleeve. He showed us a little track parallel to the main road which gave us a safe way back towards Rudding Park. The traffic lights at Crimple Beck were green, so we were able to ride swiftly up the hill, and made our way across the Showground, with the wind raking across our path. I’m not sure if the cunning plan worked, but we had an enjoyable ride in autumn sunshine and good conversation. Come back Leader. 27 miles. Jen A

About 24 Wanderers wanted to ride today and many thanks to Zoe who took a group of faster riders. Alison and I shared the rest between us and it
was good to have Alison behind to remind us to leave gaps. The route was to Ripley then Hollybank Woods and over the crossroads below Burnt
Yates to Shaw Mills. Then up Cut Throat Lane where we stopped for a photo. It was a lovely day with the autumn colours still looking good
and the wind was not much of a problem. We went on through Markington, Bishop Monkton, Littlethorpe and into the centre of Ripon where we could
see the many wonderful poppy displays. Thanks to Chris R who is going to send some photos. By the time we got to Spa Gardens a few had gone
missing negociating the streets of Ripon but most had returned after my fruitless search for them and the ones that hadn’t were still taking
photos of poppies! Fortunately everyone turned up at Fountains after a lovely ride through the deer park and a near disaster when Glyn had left
his bike propped against the main gate, while holding the side gateopen, when the main gate was opened. Chris leaned on the gate and saved
the day. At Fountains a few people had said they were going straight back and a few others joined them when they saw the queue! It was great to see Mike W at Hornbeam this morning and even better when he joined us all at Fountains. Zoe’s group were there first and then he joined us when we
got our food, which in fact hadn’t taken long. Hope it is not too long before you are riding with us again Mike. 5 Wanderers were left after
Fountains to make our way along Watergate Lane and back to Ripley and Harrogate. It was good to have a quick chat to the Wednesday group at
the end of Watergate Lane. About 36 miles. Many thanks to Alison and Chris R for sorting us all out. Liz Pugh 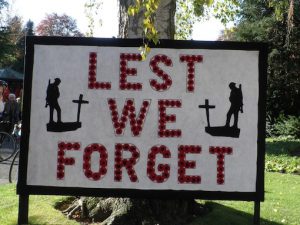 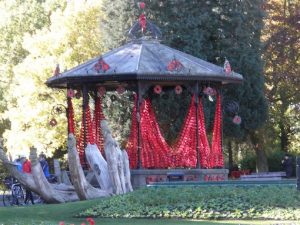 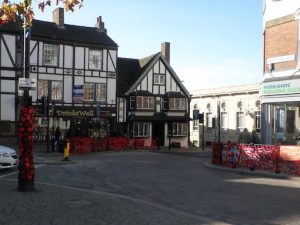 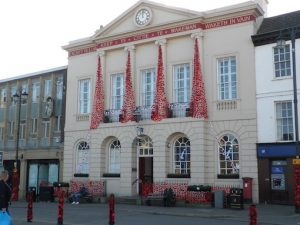 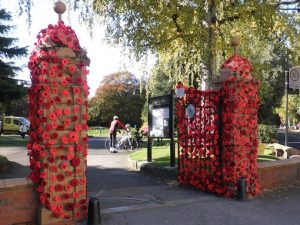 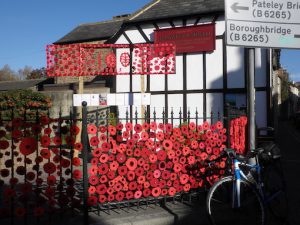 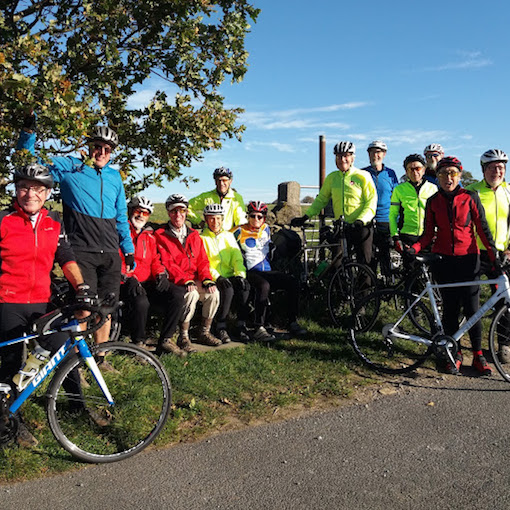 After much discussion James came up with a route to Ripon via Knaresborough, Farnham, Burton Leonard, Markington and Bishop Monkton. Seven of us set off aiming for coffee at Oliver’s Pantry where we agreed to meet up with Mike. It was good to catch up with Mike who after having a coffee with us was meeting with another Wheel Easy group at Fountains. After coffee four of us returned to Harrogate while Colin, Alan and Maris headed north. Once again an excellent 35 mile ride in good company. PaulT. 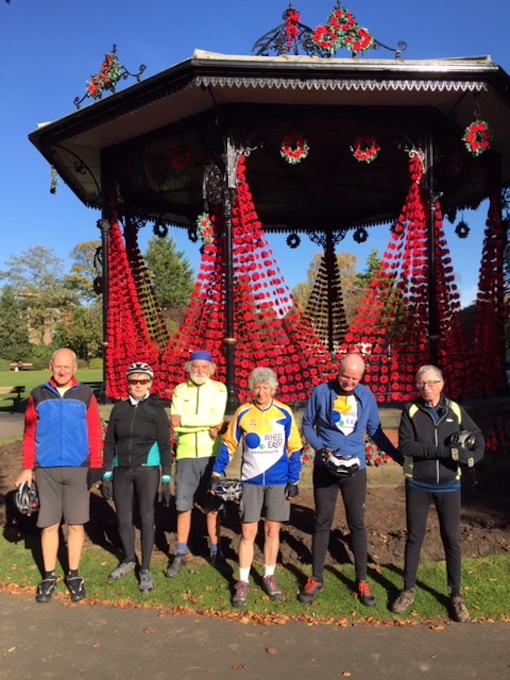 The last Wednesday before the end of BST provided the Long Ride with a broad and very bright canvas, with day-long sun, clear skies, clear views and acceptable temperatures. The only minus was the wind, brisk from the west. For this reason we chose a north-south route, using a flat route up the A1 corridor, aiming for lunch at Bedale and then taking in a stop at Ripon to look at the poppies. Six set off from Hornbeam and collected two more at Knaresborough, progressing swiftly through Arkendale to Marton, from where we took the back lanes to Aldborough. Along the ridge we got the first views of the Moors to the east and the Pennines to the west, where cloud formations gave the impression of a distant mountain range beyond – wonderful! After pausing at Boroughbridge for the customary constitutional, we progressed to Dishforth Airfield and our second Marton the day, le Moor this time. Here a navigational error, for which the leader apologises, directed the group prematurely in the direction of Ripon. A route conference resulted in the group splitting, with four heading to Ripon and the rest retracing to Marton to pick up the planned route, with its four crossings of the A1M – each with great views across to the hills. Now running a little late, Bedale was abandoned in favour of a stop at Melmerby café. The warm welcome from the staff was, sadly, not matched by the quality of the quiche-of-the-day. It pleased the eye but disappointed the taste buds, I’m told. Maybe stick to beans next time. Cutting out the Bedale loop, we headed through Wath to West Tanfield. In Wath, we exchanged cheery greetings with the EGs, who may well have been heading for the Melmerby café. Circumnavigating Lightwater Valley, we arrived at Spa Gardens Ripon for a tea stop and a leisurely look round the poppy displays (pictured). Excellent work by the knitters and crochetieres (new word?) of the city. Back to HG through the Deer Park, Ripley and the Greenway brought an excellent autumn day’s ride to a sunny conclusion. Although rides, like the days, will shorten for the next several months, it’s more the beginning of a new phase rather than the end of our enjoyment. More next week. Terry Smith