Nine riders set off from Hornbeam on a pretty mild autumn day which was warm enough for shorts. And as we progressed through Knaresborough, we accumulated two more people.
We made good progress along the usual route through Farnham, Bishop Monckton and Roecliffe to Boroughbridge where we stopped for refreshments. At this point we split into two groups to avoid overwhelming the cafes and that was the last we saw of the other group of four who seemed to have disappeared into thin air. Hope you got home OK guys.
Then our return loop through Aldborough, the Dunsforths (still no wine for sale from the vinyard), Marton-cum-Grafton, Arkendale and Knaresborough where the group began to fragment as people headed off for home. A very pleasant 34 miles in good company. Al D 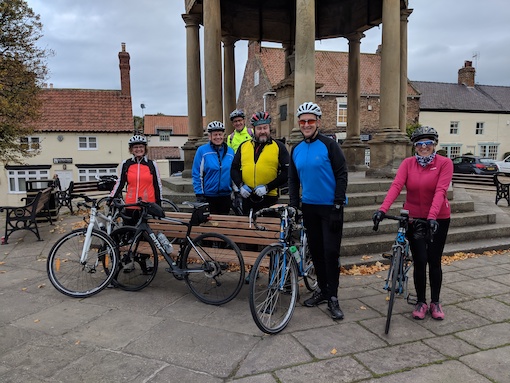 Well, another nice autumn day and 8 riders set off for the flatlands of the Vale of York. The overall ride was very nice indeed, with some good sunshine, light breezes, great banter and pleasant countryside. Highlights:
– 2 different cafes to those planned. We found Mrs B’s at Cawood nearly out of food but they just about had enough for us. I pitied the next customers! Later, we stopped at the ever good Askham Richard Garden Centre. They were out of bacon and brown bread but we managed nicely.
– Richard’s cassette which was found to be wobbling around and causing chain jumping and noise. We carried on and thankfully there were no extra problems. On later checking with a torque wrench, it was found to be tightened up properly so it looked like failing bearings.
– My tired legs! After illness and holidays, I was really feeling the miles. Richard and Eric gave me a tow on a couple of times but with little success. The only answer was to slow the pace; thanks for bearing with me guys! John H 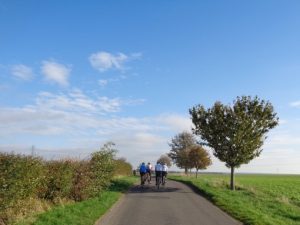 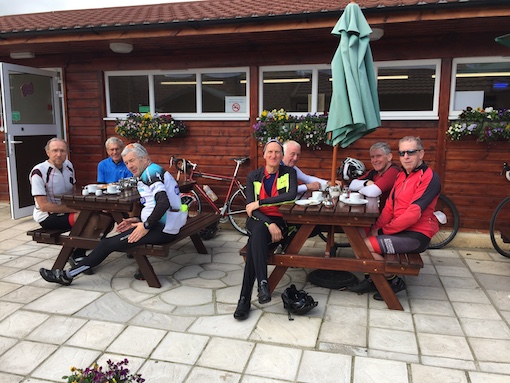 So many takers today for the short ride we split into 2 groups with Jill J leading the second group.
Lovely ride out with great views and autumn weather.
We met the first group at Ripley for tea and tea cakes and then cake home along the greenway whereupon we came across over 40 cyclists from a Bradford club heading to Ripley from Pool in Wharfedale.
Thanks all for a lovely ride. Jill J 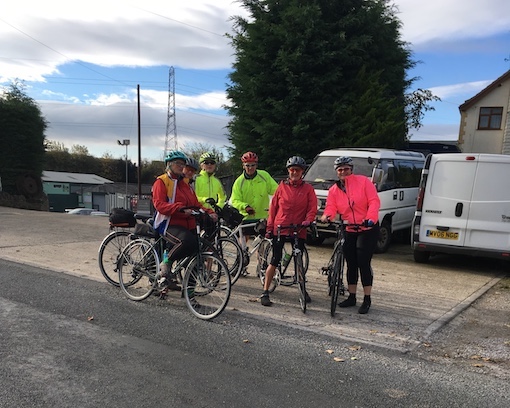 With a fine, warm autumn day in prospect, there were ten takers for a more medium paced medium plus ride. We set off briskly through Burn Bridge to Kirkby Overblow, all feeling as if we had slightly over-dressed for the occasion. Paul accompanied us as far as the A61, before heading back for other commitments. It was good to see Bob again, riding his recently re-built Giant bike. However, we still call him Bianchi Bob – so much more chic than Giant Bob. 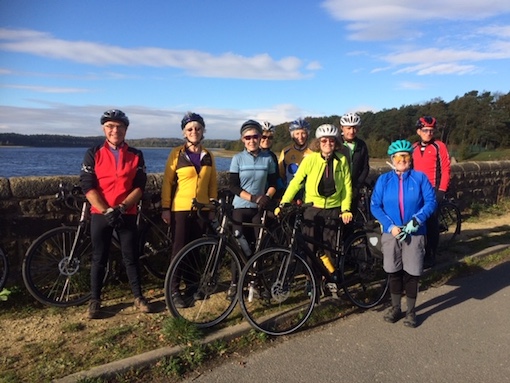 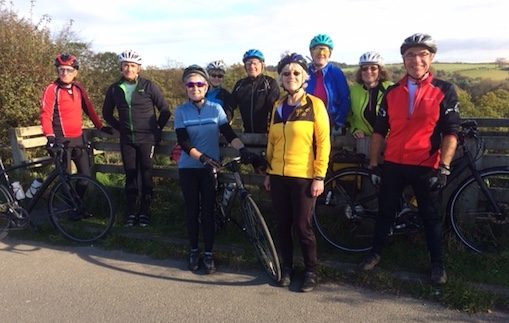 It was a busy day with large groups of cyclists heading against the tide, plus a fair number of walkers, dogs, runners and horses, all looking pretty warm. I was mindful of the expression “Horses sweat, men perspire and ladies merely glow”. Well, at the bottom of Weardley Bank, we ladies were glowing a lot, so there was a short interlude whilst we flung off layers, mopped brows and hitched up our tights. This allowed us to make a graceful and dignified ascent of Weardley Bank, which is never as bad as you remember. Eccup reservoir was sparkling in the sunshine so we stopped to take a picture of our lovely sparkly, smiling group (see pictures).
At the end of Wigton Lane we started the variation on the original published route along lanes to Scarcroft and East Rigton that, even in 2018, were unfamiliar to some of the group. The views were magnificent along Rigton Ridge and we finally plopped out at the TOP of Jewitt Lane which was a pleasant surprise, even though I was aware of a strange distant rumbling sound. We were then on familiar territory into Bramham, through Clifford and on to Boston Spa. It then dawned on me what the distant rumbling sound was – it was our tummies. It had been quite a long haul without a sniff of a cafe and we still had to get to Wetherby. The pace was visibly upped and we finally turned in to the Gourmet Cafe in the Shambles at 01.01 p.m. A range of brunches, lunches, teas and coffees soon appeared and we enjoyed them all the more for being ravenous!
It was still warm and sunny as we emerged into Wetherby Market Place and decided to take the railway track to Spofforth in view of the recent dry weather. Thereafter we had a pleasant amiable amble home through Follifoot, Rudding Park and the Showground, back to Hornbeam. Another great day and all those of us not in shorts, wished we had been! Helen & Keith T

There were 8 medium plus faster riders who set off in the glorious autumn sunshine to follow the prescribed route. After missing the turn for Village Road the group, realising their error, reassembled to discuss possible options for the route. When Julie suggested the unthinkable which was , turn around and go back , the guys looked horrified and shocked. Its a well known fact that men would prefer to cycle/drive around aimlessly for hours rather than ask for directions or – God forbid- turn back. Reluctantly they agreed to go back the 400m to get to the correct route around Eccup reservoir after which we made a right turn onto the A61 to join Wyke Lane at the traffic lights.
After Tadcaster we headed for the Deli in Boston Spa which was closed- in fact all of Boston Spa was shut so we continued to Thorpe Arch where we sat outside with splendid views of the car park.
Next we headed off via Wighill, Angram and Tockwith to Cowthorpe. Martyn headed off for Boroughbridge (home) near Cattal, Tony went on to Knaresborough after crossing over the A1, while the remaining 6 took the normal route home, through Spofforth, Follifoot ,Rudding and the Showground. There was a stiff head-wind all the way back but the boys kept up a brisk pace with Julie struggling to hang on to a back wheel ! 57 miles, 14.9 mph , 2800 ft ascent.
Julie E. 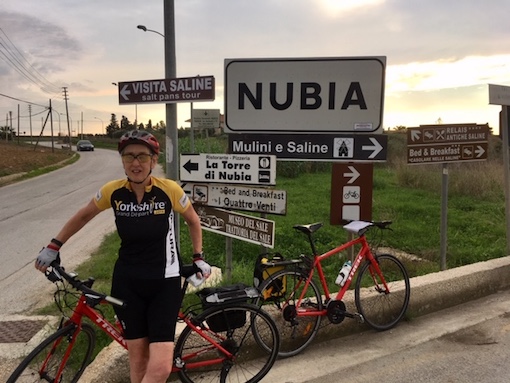 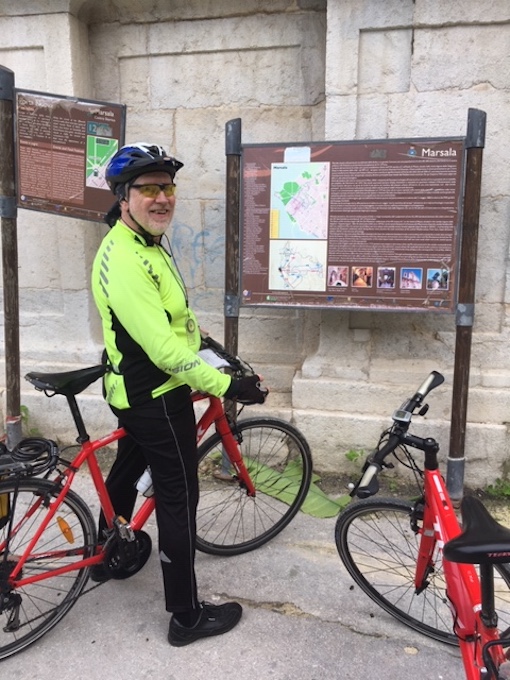 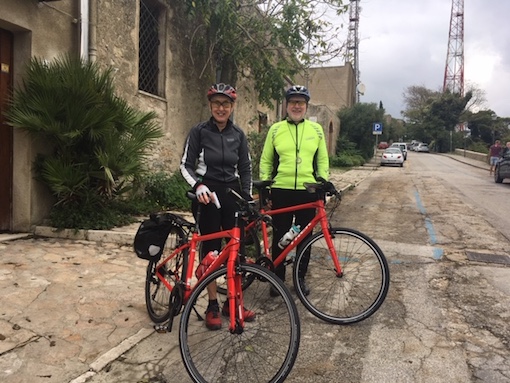