Fifteen of us opted for the Glasshouses to Pateley Walk making use of the 24 bus. There were not enough superlatives to describe the day, the weather, scenery, views, churches (all three of them), cafe stop and no-one seemed at all upset that we were missing a cycling day. We got off the bus at Glasshouses walked down to the Mill which is being restored as a residential development. We reminisced about the cafe there which we visited in the early Wheel Easy days before Tea Cups opened its cafe and where cyclists were welcomed. We walked along to Bewerley and took a short diversion to visit Fishpond Woods which has recently been restored. It was built originally as a pleasure garden for Bewerley Hall. We walked around the lake, missed the restored Ice House to get the benefit of the wonderful views across towards Pateley and walked back in to Bewerley to visit the fine one room  chapel built in 1494. Alan had called ahead to reserve our tables at Wildings where we enjoyed a leisurely cafe stop before embarking on part 2 of the walk. We headed up the High Street and up and up to Panorama Walk to visit the cemetery with views of the reservoir up the valley, the derelict church first consecrated in 1320 and  the viewing point called The Rock. Anyone with vertigo would not have liked this. our route took us further up the hill and down in to Blazefield where we were well ahead of our bus home so wandered on down to Wilsill and for one final church visit. We all agreed that more Wheel Easy walks would be very welcome and in Pateley there are any number of walks to keep us going and hopefully to keep the 24 bus in business. Many thanks to all those who joined the walk. Noone slipped on the ice and it was a grand day out. Gia 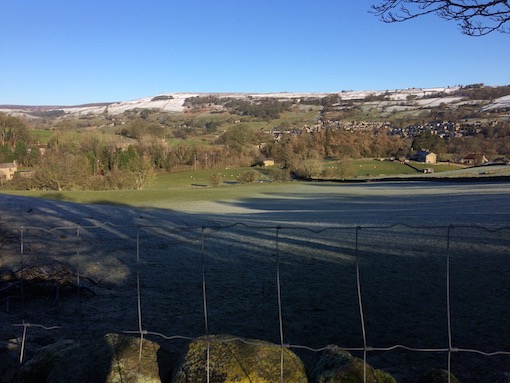 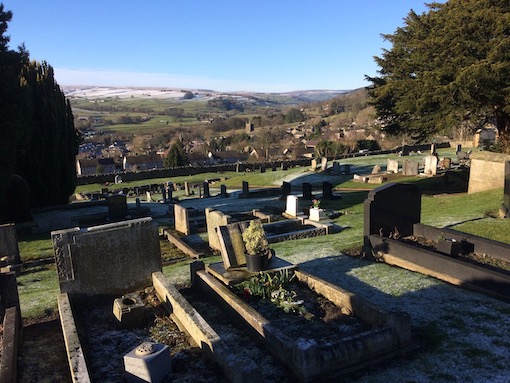 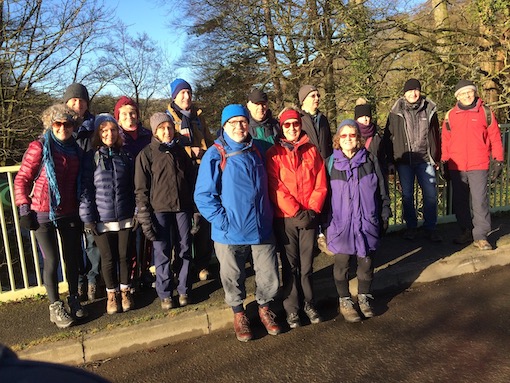 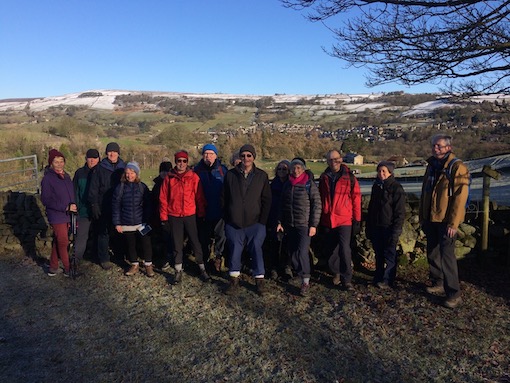 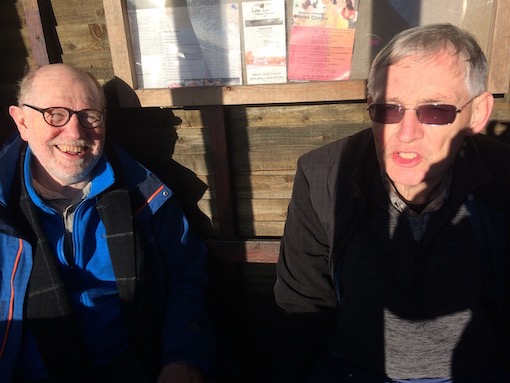 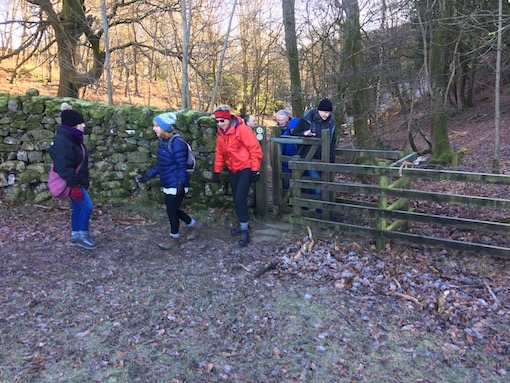 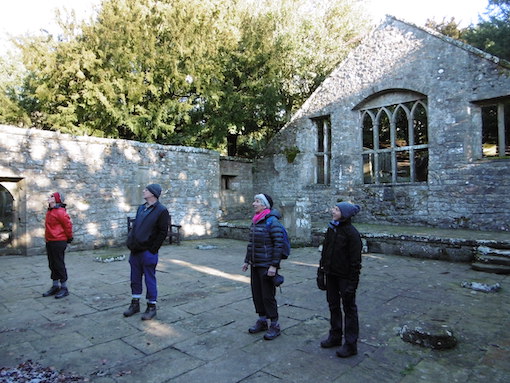 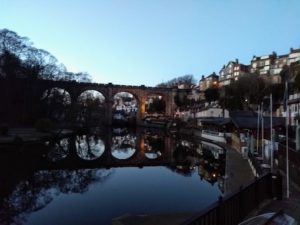 The ‘A Team’ were reduced to just the ‘A Trio’ today (Dave Pe, Peter B and Eric).  It was nearly noon when we left our usual cafe stop in Wetherby en route to York.  We were in the good company of Dave W and Dave Pr as far as Tadcaster, then the trio  continued via Bolton Percy, Bishopthorpe and across the racecourse to Cycle Heaven for lunch. We took a more direct route home via Rufforth, Long Marston, Tockwith and Cowthorpe.  Yes, the temperature was a trifle nippy today: Mr Garmin told me it was -4C when I mounted by bike at 8.45, and at no stage did Mr Garmin get any warmer then +2C.  What the day lacked in temperature was more than made up for by the cloudless blue skies, sunshine and great scenary, which is pretty much summed up by the photo of the very familiar view of Riverside Knaresborough at the end of the ride.  A familiar view indeed, but rarely looking any better than this evening.  A beautiful end to a superb ride for a nippy January day.  60 miles.  Eric.

The day started with bright sunshine and frost, and a call from Dave Watson regarding was anybody turning out and the road condition on Waterside.
It was good to see Bob Shears out after his op, he had just come down to see us before returning home.
A Happy and Healthy New Year to you Bob from all of your cycling pals. 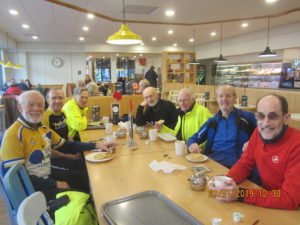 Then it was away to Wetherby for our first stop at Morrisons cafe.
The B6164 was in good condition being well gritted, however care was taken not just with the odd patch of ice but with the sun bouncing off the wet road, making visibility sometimes difficult, Dave Peatfield`s powerful rear lamp helped here, sounds daft but a rear light actually helped in bright sunshine.
From Wetherby it was on the cycle path and the road to Walton and Wighill, here Bill W and Norman headed for Healaugh, Dave Preston, Dave Peatfield, Dave Watson, Eric, and Peter B headed for Tadcaster, here Dave P and Dave W took the cycle path on the York road to head for Catterton, Healaugh to take afternoon tea with Bill and Norman at the Askham Richard cafe.
T`other Dave P, Eric and Peter B headed for Oxton  and Bolton Percy and all directions Yorkish.
Obviously care had to be taken on the very small roads and avoid where possible the shaded areas, but where the sun shone the roads later on were bone dry.
Then for the “B” it was home via Tockwith, Cowthorpe and Knaresborough.
An excellent winter ride for the “B” with good mileage and we stayed that bit longer with the “A” team.       Dave P

Four Long Riders met at Fountains Visitor Centre, leaving bikes at home as a precaution against aching hands and unwanted spills on icy lanes. Icy paths were certainly in evidence in and around Fountains, not least on the approach from the Pateley road. Choosing a route from the NT’s website, we set off from the car park to the church and followed the website’s route to the north to accompanying cracks from gunfire. We had strayed into a cull of the deer herd and were soon stopped by a polite marksman who turned us away from the scene, with one faller clearly visible about 50 yards away. Marksman explained the reason for the cull – their assessment was that the herd had outgrown the capacity of the grazing available, requiring a reduction of numbers. Targets included sick, lame or injured beasts and a quota of hinds to keep the population under control. Signs warning us to keep to main roads on the estate 0800 to 1100 were not posted on the paths from the Visitor Centre which is why we missed them. Continuing the walk into the seven bridges valley, the full splendour of the morning’s weather emerged: valley sides lit by the low sun, crisp paths, no wind and the prospect of early coffee at the Studley cafe. The cafe was crowded as might be expected given the weather and the closure of the Visitor Centre outlet but turnover was swift and soon we were having drinks and bakes, giving way equally swiftly to the next wave of walkers. The second leg of the route completed a figure of eight via Aldfield where at last there was time to take in the blue plaque in memory of William Frith – usually we are hurrying past en route to Masham. Once past a stuck gate, released thanks to the agility of Peter J, we were soon in the vicinity of the reek and ruins of the sulphur springs at Aldfield Spa, evidently the source of the water at Spa Gardens Baths. From here, hard but still icy estate tracks led us past half-lit valley sides glowing in browns and reds to the Fountains Hall road and the Visitor Centre. A shorter day than usual, but a memorable one – for the weather, the colours, for those guns and for the fallen deer. Terry Smith