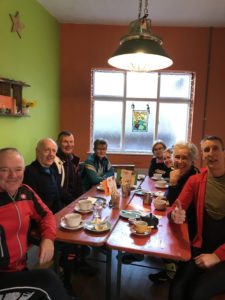 There was a very small turnout at Hornbeam -what did they know that we didn’t? Answer – 40+ mph winds that’s what.I had decided to abort the original planned route due to it’s exposed location and opted for Ripon instead. Peter (Lawley) had prepared himself to lead the original route but as no-one would go with him he was forced to come with us instead. In search of a more challenging ride he ‘binned’ us at Ripon and went solo- where we don’t know. The rest of us had a lovely leisurely coffee (or two) at Oliver’s Pantry. Helen B suggested an excellent route back which involved a tail wind – excellent we all thought ! – through Skelton, then Boroughbridge where we said farewell to James who was on a timecard, Marton-cum-Grafton, Knaresborough and the dreaded hill. Today it was particularly tough in the wind although Tim (tall one) shot up it like a ‘rat up a drainpipe’. Had he been saving himself I wonder – anyway I couldn’t catch him. Thanks everyone for a great ride and thankfully none of us got blown off our bikes although it was scary at times. I’ll do the hilly route some other time. Respectable 36.3 miles at 12.6 mph- most of it into the wind! Janet G

Having taken advantage of a lot of draughting on the way to Ripon with the rest of the Medium Plus group and the time only being just gone 11, I thought my legs needed a little more exercise before a coffee stop. I headed towards Grewelthorpe out of Ripon past the Army Camp. For the main part the hedgerows sheltered me from the wind – but where I was exposed the headwind was ferocious. After refuelling in the community cafe, I enjoyed a tailwind to Kirby Malzeard and Laverton. From the the stretch up to the moor towards Pately Bridge was tough being both uphill and straight into the wind  – with few hedges !   Cycling on the moor with a pannier catching the sidewind made it pretty dicey and definitely better being alone than in a group. From Pately back to Harrogate the wind was occasional help, but being less exposed and generally lower in height conditions were noticeably calmer. Apart from the wind the views all round and especially across the Vale Of York were wonderful.   50 Miles – and a route to repeat in Summer !  Peter L

Not many riders out today on a bright, sunny but windy morning. The medium ride was low level so myself, Tim, Mike, Fred and Margaret set off down towards low bridge picking up Colin at Calcutt, at least going along Abbey Road was sheltered! No fast freewheeling down the hill from Farnham crossroads, we just took it easy as there were some strong side winds blowing which were with us until Bishop Monkton, another hazard was debris on the road from hedges and trees. From Ripon through Skelton on Ure and on to Boroughbridge, the going was easy with the wind behind us, then we stopped at ‘Plenty’ for coffee. On the way back, we had head winds until Staveley, the views were nice looking towards the hills which had snow on the tops, a reminder winter is still here or yet to come! Then it was through Knaresborough and up the hill where we all split up at the top to go home. 33 windy miles. Chris R. 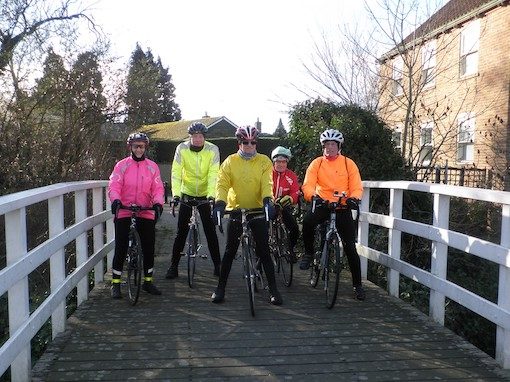 Short ride, short report. 4 in total on this cold, very windy day: two Pauls (B and T) and us. Original intention was to ride around Kettlesing, but we were so cold by the time we got to Ripley that we agreed simply to go to Sophie’s (last day before they close for 3 weeks) and call it a day. Good craic over coffee (machine working again). We went back up Clint Bank Lane, the two Pauls up Hollins Lane.   About 16 miles.     Geraldine 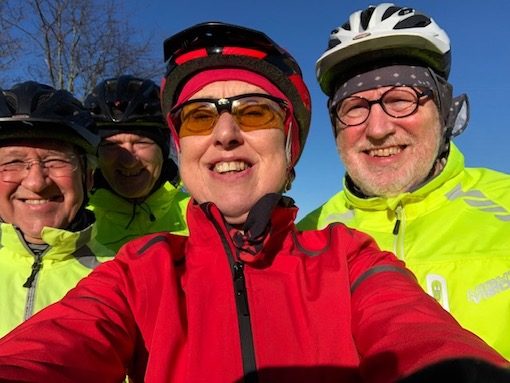