Four poddlers’ wanted a short gentle ride…actually two wanted a long chat and possibly no ride.  Anyway a meander to the Bean cafe in Boroughbridge via Knaresborough and the worryingly late E.Gs…(what were they up to), Farnham, Copgrove and Roecliffe for Jane and Caroline…an added loop for Monica via Bishop Monkton and an escape for Surjohn via Burton Leonard, completed, and an attack on the best cheese scones on offer in Yorkshire was a priority.

After chatting to Jill and Jeanie and their boys who were in mid tour of the North we headed home….Monica at speed, Caroline and Jane not at speed.  As Jen A points out no matter how slow you go…you always do more than someone sitting on the sofa..24 plus miles into an endless head wind. Caroline G 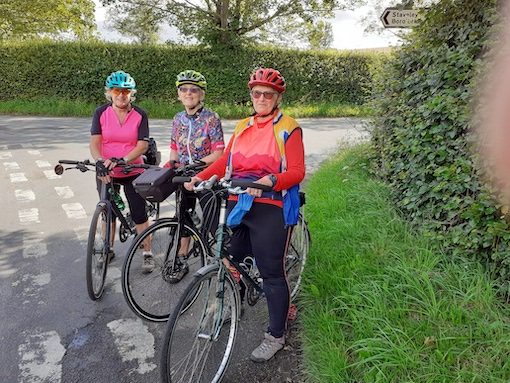 There was an Awayday so I thought there would be a smaller turnout for Wanderers than the 20 assembled to follow Alison who had kindly offered to lead when Joe found he had mistaken the time of an important conference call. She saved me, who am geographically dyslexic, from leading and getting lost before leaving Harrogate, though Brian actually did lose us half way down Leadhall Lane, not reappearing until almost at Brimham! I tried hard to keep to my promise of back-marking on the way to Beckwithshaw and onwards.

The wind was, as usual, against us up to Little Armscliffe (not Crag as Brian had set off towards ..). We met up with Mike S at the lay-by past the car park (a safer place to regroup, I think) so we were 20 again. At each regrouping we asked “Any sign of Brian?” but no. Along to the Sun Inn via the dog-leg to Dangerous Corner and over the A59 to Darley. At some point Alison invited the brothers-in-law Mikes to take a faster group and off they sped. The rest carried on to Hartwith Toll Bridge and turned left towards Stripe Lane, leaving Dennis to go home to Dorothy’s lunch.

The haul up to Brimham was significant after riding a few more miles than usual before the ascent. Newish Allan regretted coming on his full suspension mountain bike at this point despite its low gears. Just as we turned towards the Rocks a figure appeared who had not been with us for most of the ride – yes, Brian, who had done well to catch us after his detour! The run down from Warsill was welcome as was the coffee and cakes from the ladies of Ripley Church and the preview of the Pig Scarecows in the village.

The weather was much better than forecast and the sun shone making the views spectacular on a lovely ride. Thanks Alison for stepping in. About 30 miles. Geraldine B. 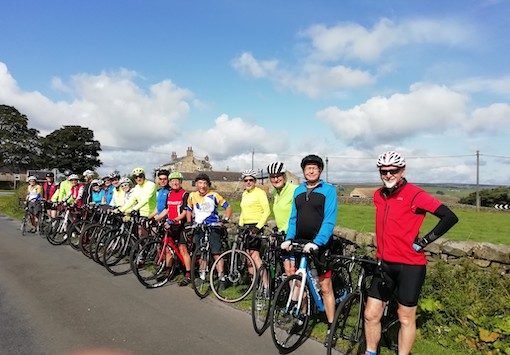 With the bulk of Wednesday riders off on the Away Day, the half dozen left under the route guidance of John and Alan, set off on in an anticlockwise loop of 55 miles. The specialized six (not being the famous five nor secret seven) comprised of Jill, Jeanie, Peter, Stuart and the route leaders The loop consisted of Kirkby Overblow, Wetherby, Whixley (where we failed to see a train at the level crossing), then a stop at Boroughbridge at 30 miles! where we all felt long deprived of food and drink. After refuelling we set off north to Dishforth and took the less used lane to Marton and then Sharow. The traffic had been light up to that point but the road into Ripon was busy but we kept the speed up and reached Ripon in quick time.

The Specialized six then fractured! Alan had already ridden to Hornbeam from Fountains area and he headed for home. Jeanie opted for Fountains route and the rest pressed on to Bishop Monkton via Littlethorpe. At that point Jill and John (was that a book title?) went back via Markington and Stuart and Peter went on to Knaresborough. Jill and John then met up with Jeanie in Ripley church’s cafe. Sadly the Gin and Tonic cake was not on offer but they do bake some great illegal alternatives. Home for 55 miles at not an unreasonable pace. Forgot to take photo! John R

We had eleven riders at Low Bridge and the ride started with greetings to Caroline and the Poddlers. After consultation with our sailing fraternity on wind direction it was decided to head for Wetherby for our first coffee stop, Otley and Ilkley had been discussed as a destination but that’s another story.

It was steady away on Waterside, however the creeping sprint started to develop till it was probably eyeballs out then kick for the last 100 meters. The last four in were Dave W1, Bill, Dave P1 and Theo, no surprise there.

After caffeine and calories a “B” team comprising Bill, Dave P1 and Theo with Dave W1 and Nick guest riders headed for Walton, the “A” team, Ilkley now not on, headed towards York to return via Askham Richard and its cafe. The “B” team made Walton at a relaxed pace, headed north east to Rudgate then south to Thorpe Arch, Wighill, Healaugh and the nursery cafe in Askham Richard, to relax outside in the sun with some excellent food and drink. We do not have a group photo (well you have all seen enough photos of us) so here’s a photo of a piece of cake, the challenge being can you eat it all?

Then it was on to Tockwith and Cattal at a steady pace. The group broke up at the junction with the B6164, Bill and Nick heading for Spofforth at a fair pace, Theo and two Daves heading for Knaresborough.

Dave P1 and Theo then picked up the Greenway to Harrogate. Theo had 46+ miles door to door, not a big number in his past but pretty fair for today. Excellent weather with a short shower in the last 100 yards. Dave P 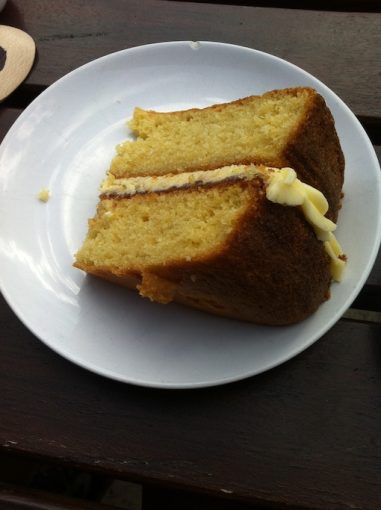 The start of this months Awayday ride did not look promising. As we made our way towards the Yorkshire Cycle Hub(YCH), there was a thick mist over the moors and the ride looked in doubt. However as we dropped into the valley it cleared and the sun came out and there was a sigh of relief- not least form those who had not bought lights!

The YCH is an impressive facility with good cafe, bike hire and a repair shop set in  beautiful countryside. Well worth a visit and perhaps a few gravel rides?

After an early coffee we set off and encountered a newly surfaced road with lots of loose chippings which made it a difficult start. However, as you would expect form a Richard Leake planned ride, we soon encountered a few hills to take our mind off that and with great views we knew we were in for a treat.

We went through Castleton and then into Westerdale and the long climb to Blakey Ridge. The hard climb was rewarded with spectacular views on all sides and then a ride along the ridge to the Lion Inn before dropping down into Farndale and into Hutton-le-Hole for lunch. The faster group were already filling one cafe so we occupied the other one and had a good lunch and refuelled before the rest of the ride.

The second half of the ride mirrored the first half as we set off through Lastingham and then Cropton and a long climb back up to the ridge and a ride on the Moors. A few smaller climbs on our way back to YCH made sure we were ready for a rest and refreshments before we set off back after a superb days riding in wonderful countryside, challenging riding and superb scenery in an area we don’t often visit.

Thanks to Richard for devising the route and to him and Steve for leading the groups. A ride that we were all glad we had signed up for – although we were all tired at the end!  40 miles and 3,600′ of climbing in (eventually) good weather. It was another great Awayday! Kevin D

Twenty-four riders wended their way to the Yorkshire Cycle Hub in the wonderfully named Great Fryup Dale for the August away day.  After passing through fog on the way there we had a leisurely coffee to allow the sun time to break through.

The road was freshly gritted for the first few miles (and the last few), which wasn’t helpful, but we were soon through Castleton and out into the wild solitude of the moors and heather country.
When the heather is in full bloom, Westerdale is as good a place to see it as anywhere in the UK and it was pretty good today.  In a week or ten days it will be even better, so I for one will be making a return trip.

The ford at Hob Hole was too deep for some to risk, but a few brave souls took it on without mishap and gained the advantage of not having to re-start on a steep gradient.  The long climb from Westerdale to Rosedale Head was challenging, but offset by the glorious scenery.

Dropping down Blakey Bank, we followed Farndale East Side to Hutton-le-Hole for lunch.  Service was a bit random, but eventually we were ready to continue through Lastingham and on to Hartoft and the (mostly) gentle climb back to the top of the moor above Rosedale Abbey.

The next climb on the road towards Egton Bridge was perhaps one too many for some, but the reward is the magnificent downhill sweep around Glaisdale Rigg with views over Glaisdale and Great Fryup Dale and all the way out to the North Sea.

There were some tired legs on arriving back at the Yorkshire Cycle Hub, soothed somewhat by tea and cake with what must be one of the best views from a bike cafe anywhere. Richard L 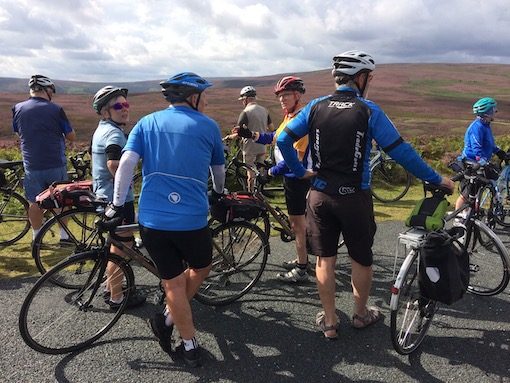 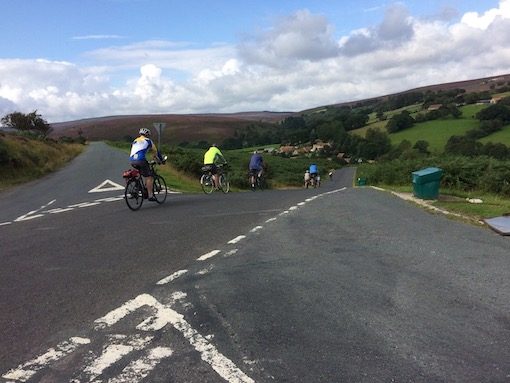 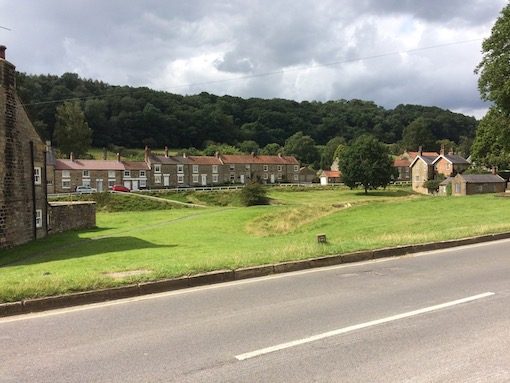 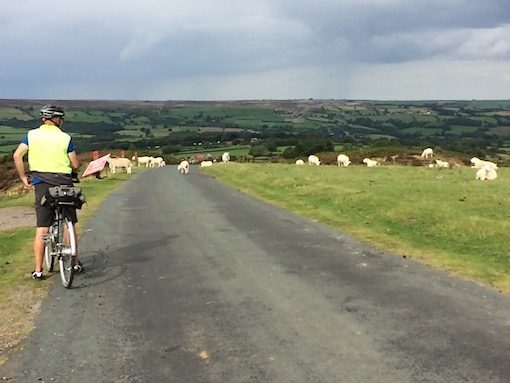 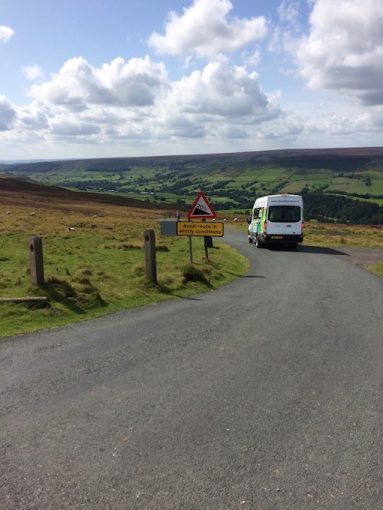 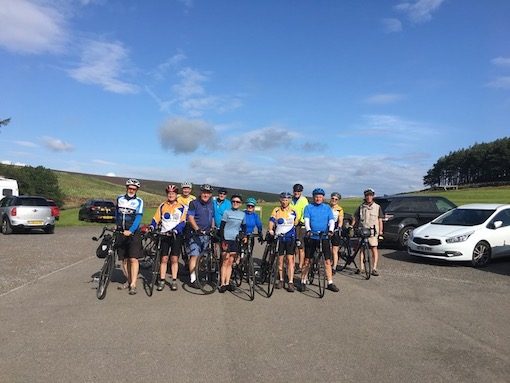 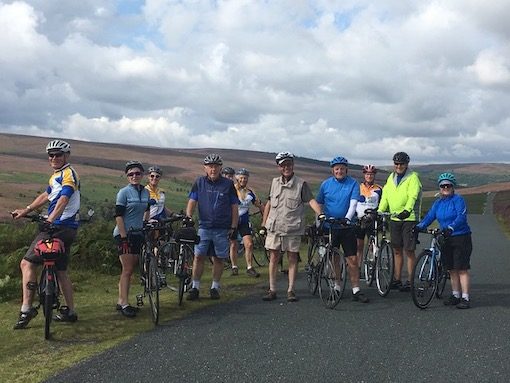