Ten takers for the short ride which was a new plan from Caroline and a magical mystery tour to get out of Harrogate. After following by ways and highways not usually cycled on we wended our way past the Pine Marten to Lady Lane and from there to Burnbridge and Pannal before heading to Rudding Park.

Along Forest Moor to Bilton Hall where we split; some to go along the greenway to Ripley the others taking the Beryl Burton to Knaresborough where then meandered through to Scriven, Lingerfield, Scotton, Brearton, Nidd and meeting the others in Ripley for tea and cakes.

Home along the greenway and back before the black clouds appeared.  Thanks all, Jill J 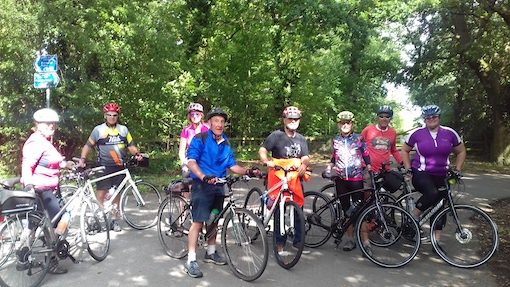 A lovely day dawned, feeling a bit like the tail end of summer, particularly with the forecast autumnal gales. Chris R and I were down to lead but after the fast boys and girls had gone, we were able to form one orderly group. Chris started off back marking but by the end of the day he had gravitated to his natural habitat – at the front! I just enjoyed the day.

We soon warmed up on all the hills, a particular favourite being Greenhow and then really began to feel the strong wind which, as Chris pointed out, was at least warm. We elected not to stop at the Stump Cross Cafe as we were all keen to get off the exposed Pateley Moor into the relative shelter of the Wharfe Valley. It is always a delightful ride down to Bolton Bridge with fabulous views of the fells, still purple with heather and you could almost hear the bees, revving up to start producing honey.

We too were now in search of food and our destination was the Abbey Tea Rooms. This reminded me of a recent newspaper article on the subject of “What to Eat in Your 20s, 30s, 40s, 50s AND BEYOND”. I can’t speak for the whole group but Keith and I definitely belong in the “and beyond” category, so we apparently need to major on protein and calcium, in a vain attempt to arrest the galloping decline in our muscle strength and bone density. That’s my excuse for ordering the giant, griddled haloumi cheese baguette, with Mediterranean vegetables and for influencing Sarah to do the same! Delicious. Rob left us here to go home via Skipton. Glyn also peeled off somewhere to head back to Leeds.

Barely able to move, we eased our protein and calcium laden bodies back on to the bikes for a favourite route back via Ilkley, Askwith and Otley, pausing only to read the entire contents of the Askwith Parish notice board. Bob wilfully misinterpreted most of the notices and was placed immediately on the naughty step. With the wind now behind us and temperatures rising we undulated happily along to Pool, Castley, Weeton, Kirby Overblow (where Steve W had parked his car and was thus able to bale out before the Showground Hill) and Harrogate. A surprisingly demanding route but it was a joy to ride with such a jolly and enthusiastic group for the 57 sunny miles. 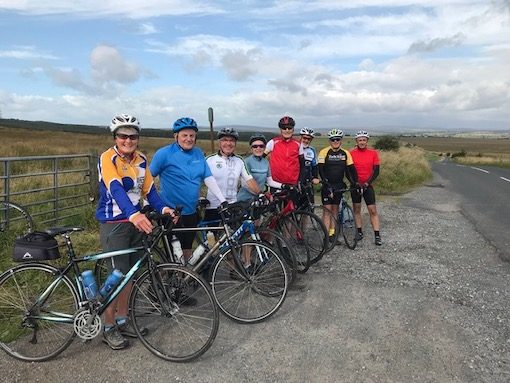 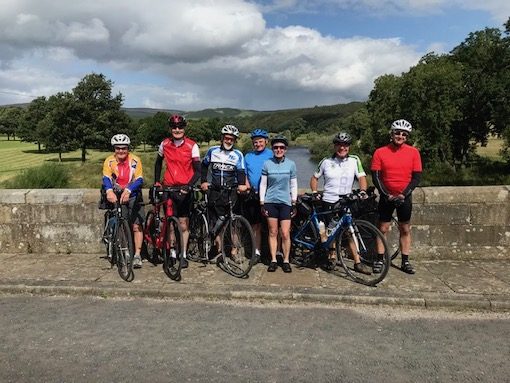 Last week we attempted to go to Toft Gate Farm but had to turn back on Duck Street due to the rain and wind.  However, four of us were determined to go there this week!

We followed Helen and Chris’s to Greenhow where we left them and made our way to the farm for lunch. After an excellent stop we continued down Peat Lane into Pateley where we turned into Kings Street and New Church Street and started the climb up Wath Road and then the steep lane up to Wath Lane. The climb was certainly worth it for the stunning views. We decided to take the shortest way home via Fellbeck, Brimham, Wilsill and Ripley. A great 40 mile ride in good company. Paul T 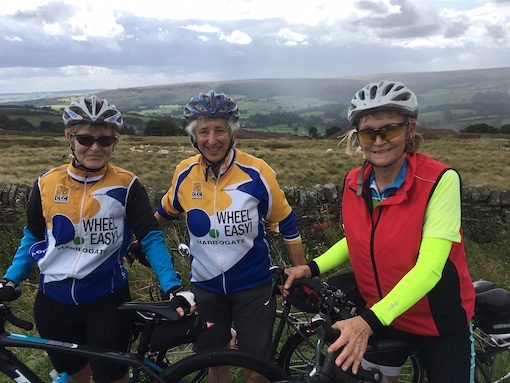 Andy A joined the group at little Almscliff to make us nine and we made our way up Menwith Hill Road and Duck Street into a bracing headwind that made the writer appreciative his new Wheel Easy gillet. Paul B producing trojan work on the front in challenging conditions to keep the pace respectable. The ride was hilly enough to provide an excellent workout without being too much. Proceeding past a busy Ilkley golf club and the popular Bolton Abbey. Refreshments were enjoyed at Tea on the Green. Café legs being gently brought back to life by the now sunny weather and a tail wind allowed us to reach top speeds on the way home. Andy A and Mark T left the group to hone their climbing skills and around 58 miles would have been achieved by most riders by the time they reached Harrogate. An excellent half-day out. Thanks, Darcy G.

Nine riders (Julie, Zoe, Helen, Janet, Vince, Tim No. 1, Top Tim, Tall Tim & Mark) followed the standard route up Menwith Hill and then on to Duck Street where the wind was just a taster for the relative gale and shower of rain going past Stump Cross – lovely weather for the middle of August. Predictably the wind was left behind us as we meandered down past Skyrholme and on to the Abbey Tea Rooms at Bolton Abbey for a cuppa sat outside in the sun. Vince and Tall Tim left the group to ascend Langbar with the main group completing the route home via the Wharf valley before splitting at Kirby Overblow. Around 59 miles or so. Tim L 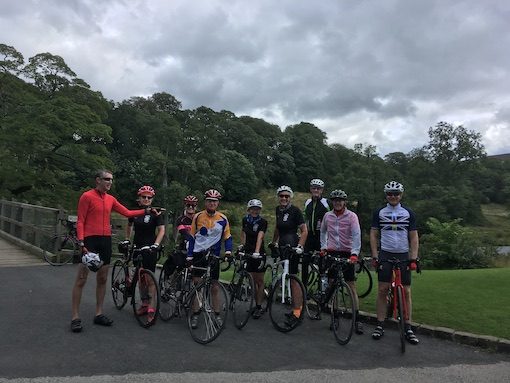 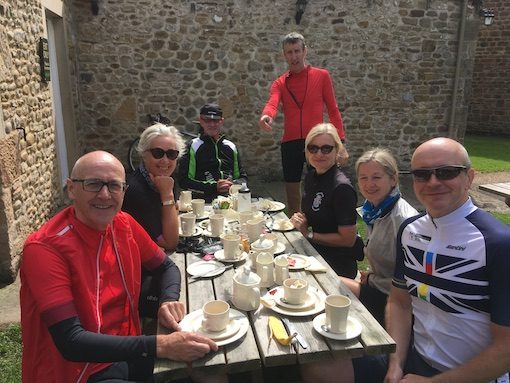 Today’s long ride was scheduled to be 80 miles via Ampleforth and Castle Howard – we didn’t get to either! I’d already amended our first cafe stop to Coxwold rather than Ampleforth due to the Rydale Cycling Grand Prix taking place there, but I’d completely missed the fact that BBC Countryfile Live was happening at Castle Howard and apparently causing long tailbacks of traffic – not a good route route for cycling!

Eight of us set off towards Coxwold with John & Richard leaving us at Boroughbridge. Over a pleasant stop in the garden of Coxwold tearooms a new route was suggested so we then headed for Kilburn, Felixkirk, Upsall, South Kilvington and into Thirsk, then via Rainton back to Ripon for another stop at Spa Gardens. We then made our way home via Knaresborough having ridden around 74 miles, a good ride although hard work into the wind at times.

Thanks to Peter for the route from Coxwold to Ripon and to all for the good company. Jill F 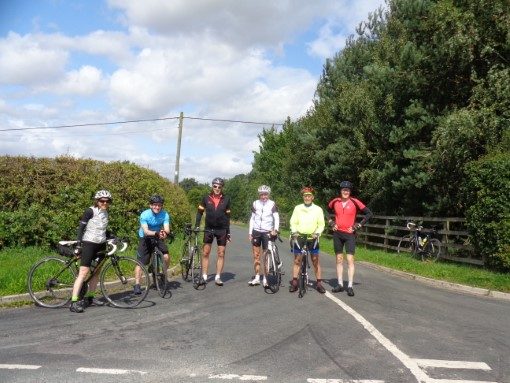 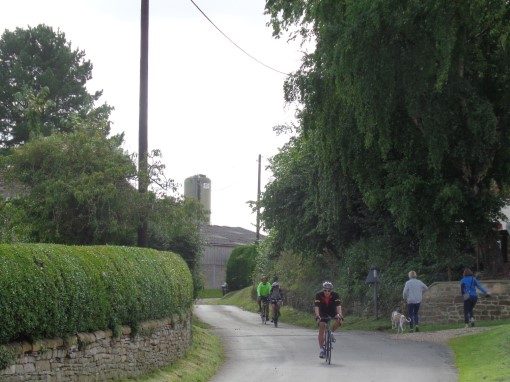