Amazingly 12 people wanted to practice their forgotten cycling skills on this wonderfully balmy spring like day with the Poddlers.  Despite there being an away day Angela R had tens of takers for her Wanderers Ride. And even more surprisingly all group had very similar routes planned…for starters anyway. New Milly…. Liz…. Barbara…. Rachel…. and the jolly lady whose name I have rudely forgotten…. realized they could still cycle speedily without stabilizers and we seemed to whizz to Wetherby via Knaresborough….Cowthorpe…. Tockwith….Walton …. and settled in outside a Cafe in the Shambles having only lost Surjon…. Max…. and Dennis en route.   We all noted the most surprising thing of the day…a plate of cheese on toast which could feed 50…. a double-decker sandwich the size of house and each plate of croissants containing two enormous croissants and a bowl of butter which could feed one family for a week of breakfasts.

Progress home was slower but we followed the Harland Way back to Spofforth and on to Follifoot and home in wonderful spring like sun…discarding jerseys and anoraks as we rode. THANK YOU ALL FOR FOLLOWING SO TRUSTINGLY. 28 MILES CG

There was a reduced gathering of Wanderers due to the Away Day ride. We split into three groups dependent on speed and set off on this beautiful March day. The fast group were never seen again, so hopefully they found their way somewhere vaguely related to the proposed route. The medium group was the majority and the slower group was four, but reduced to three when we lost Joe! Fortunately, he was found and the latter two groups met at North Deli for a repast. We cycled up and down dale (well around the environs of Harrogate and Wetherby) and joined up known routes in a different way. We came across the Poddlers at Cowthorpe who were allegedly doing the same route, but I think must have cut a corner…….

It was a lovely spring ride with sunshine and daffodils in abundance.  Angela Rickards 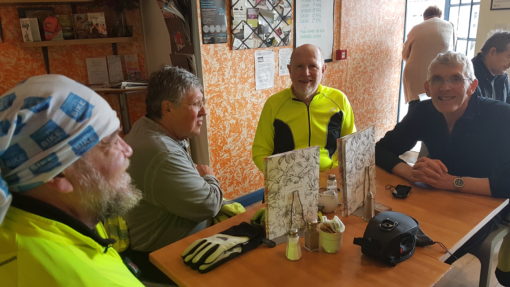 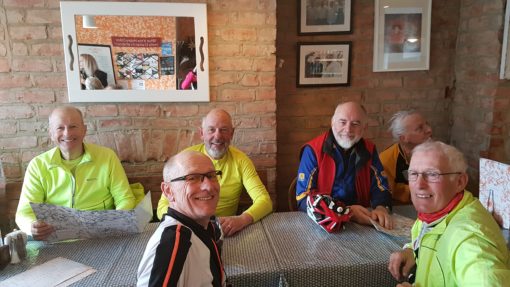 Four riders (Zoë, Mike, Collette and myself) set off before the main group to establish a gap that lasted all the way to the Hornbeam traffic lights. Onwards to Calcutt and then towards Follifoot where we were once again over taken by the main group as we ditched layers of clothing in the warm spring conditions. We thought we were following the route until we found ourselves in Tockwith at the driving school. This led to a little off-roading (after all Mike has a new gravel bike) before roughly getting back on route and ending up in the café at Thorpe Arch in the sunshine. Nice. More clothes came off as the temperature continued to climb all the way back via Spofforth and The Showground.  Wildlife spotted included a weasel, two jays and a strikingly coloured male kestrel that landed alongside. 34 miles I reckon. Tall Tim. 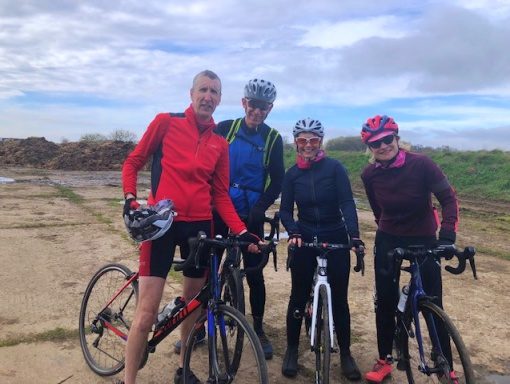 For the first Awayday of 2019 the starting point was Gargrave and a walk organised by Mike Clark. 23 riders (including Sara making a welcome return to riding with us after a bad injury) gathered in quite dull weather in the car park of the Anchor Inn and after an early coffee break the 3 groups were ready for the off. A small(faster) group of 3 riders set off lead, by Richard Leake, and were not seen again till the end of the ride! The other two groups set off on a staggered start at a more sedate pace along the towpath (a first for the Awayday programme) and headed off towards Bell Busk and Hellifield. The mist was down and there were few views but we were grateful it was not wet and cold. We then headed towards Bolton -in -Bowland and our first stop to admire the Abbey at Sawley (quite a few were more interested in the fish and chips for a fiver at the pub!) and a photo opportunity. We then made our way towards lunch via Grindleton and into Chatburn and the Garden Centre. The cafe was very busy with pensioners consuming good Lancashire fayre- and we soon joined them! Mike had done an excellent job in choosing the cafe with good service, good food and plenty of space. After enjoying our food and chat we then set off on the second part of the ride and Andrew warned us the bigger hills were to come…. He was right. The route was very up and down on the way back through Rimington and Barnoldswick and with the sun coming out we were all quickly shedding gear and enjoying the views which were now emerging. All the climbs were ‘short sharp shocks’ which suited most of us on the first sortie of the year. Some respite when we reached the canal and a spin along the towpath and then one more hill at West Marton before a superb run into Gargrave with the sun shining and everyone looking happy. A great first Awayday of the year covering 39 miles and 600 metres of climbing which had been superbly put together by Mike Clark. A big thank you. Whilst the weather wasn’t its usual sunny self it did improve and everyone had had a great day out. Thanks to Richard, Andrew Hall and Mick for leading the groups and for everyone who turned out. Steve Wright is planning to repeat this ride soon and I would recommend anyone who missed it to give it a go.  Kevin 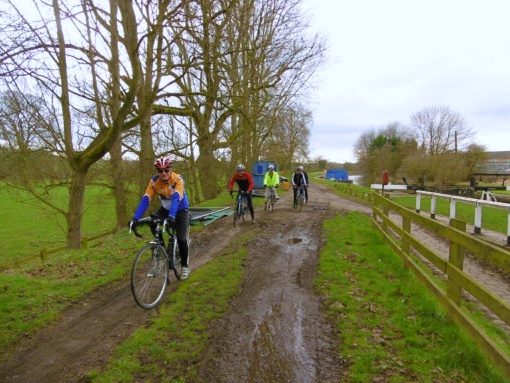 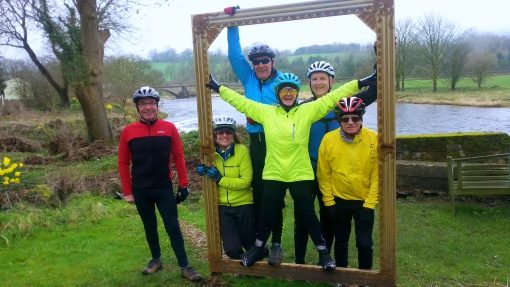 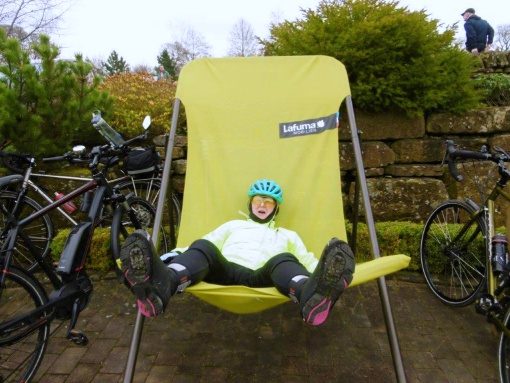 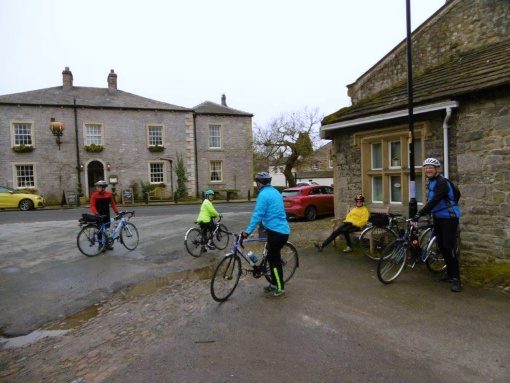 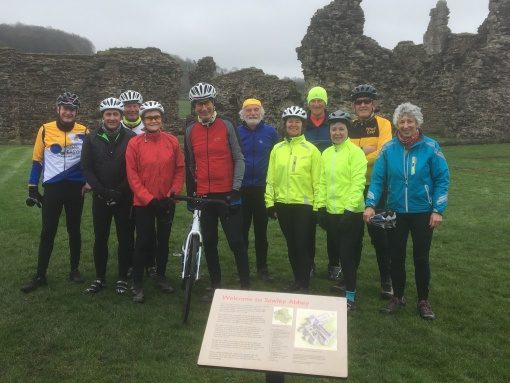 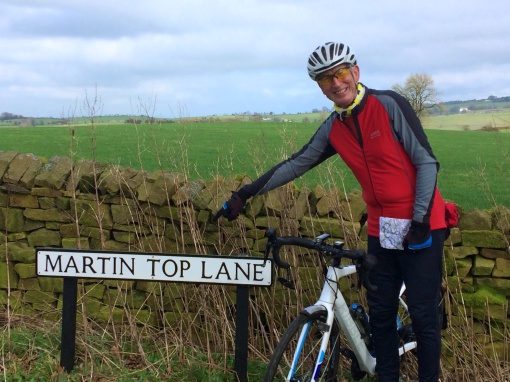 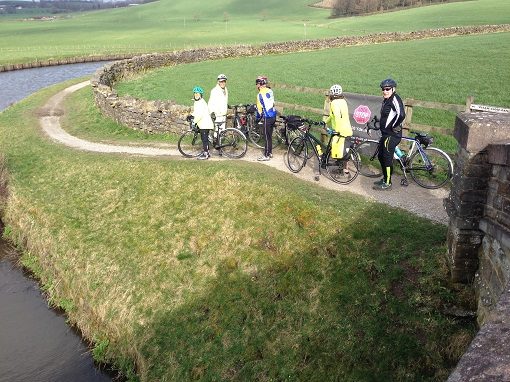 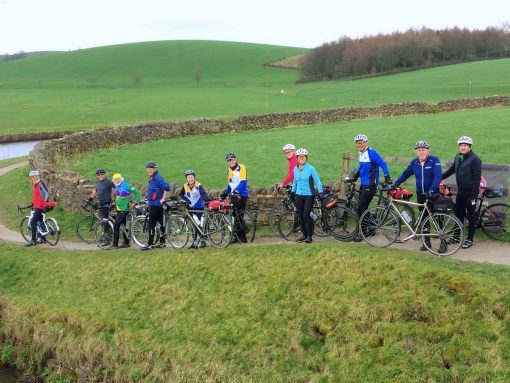 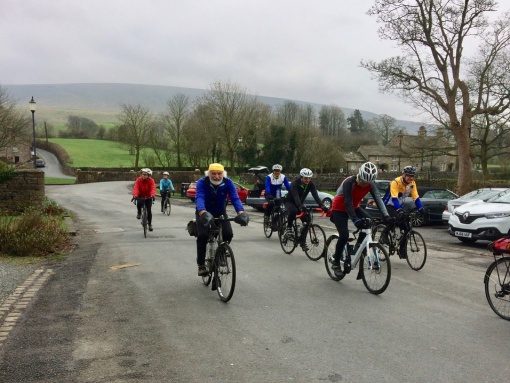 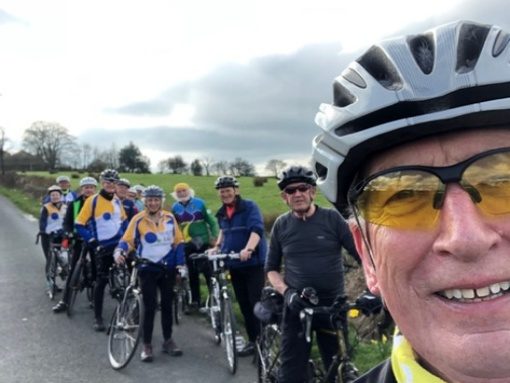 The official first day of Spring proved to be a belter.  Although depleted by regulars away-daying, we still mustered six for today’s long ride. Our route took us into the orbit of today’s Yorkshire hot spot (according to Paul Hudson) of Doncaster with a forecast high of 16C.  Early ambitions of using the RSPB’s Visitor Centre at Fairburn Ings faded when reports of the very limited fare on offer came in, so attention focussed on the nearby Lumby Garden Centre cafe, just off J42 of A1(M), opposite South Milford Hotel on A63.  South Milford Hotel is still recognizable as the former Selby Fork Motel – I wonder why we don’t call them Motels anymore?  Early chilliness soon gave way to that over-dressed feeling after the first climb to Kirkby Overblow from Burn Bridge, a feeling that increased after every climb to the outskirts of Bramham.  Here the flatlands were more in evidence, to the relief of several of us as we plotted our course through the limestone villages that were once staging posts on the Great North Road – their former coaching inns now closed or converted into residences. And so, to Lumby Garden Centre coffee shop.  Here massive menu choice is available to peckish cyclists after 26 brisk-paced miles, who could have had late breakfast, brunch, elevenses, early lunch or afternoon tea and cake.  Our orders were cheerfully and efficiently delivered to our sunny warm roost on the terrace (see photo), leaving us all giving a thumbs up for this establishment.  Toilet arrangements in a shipping container looked temporary while the building works evident in the car park progress.  This is definitely one to revisit.  Our return route through Lumby revealed yet another attractive limestone village, with an enticing-looking Orangery Tearoom to consider for the future.  Onwards to Towton took us into more familiar territory as we skirted south of Tadcaster to Bramham, Clifford, Boston Spa and Thorp Arch before heading over Wetherby Racecourse to our first parting of the ways.  Here, three opted for Wetherby (two for a Morrison cafe fix) with the remaining three pressing on to Ribston, Spofforth and Harrogate.  Many thanks go to John S, who shepherded the group from the front, the back and the middle, dropping back to help gapped riders when needed and setting the pace for more speedy folks.  Highly enjoyable miles, mostly (A63 east from the motorway the exception), and blessed with warm sunshine made this another memorable ride to conclude a winter season that has seen many bonus days out in the saddle. Terry S 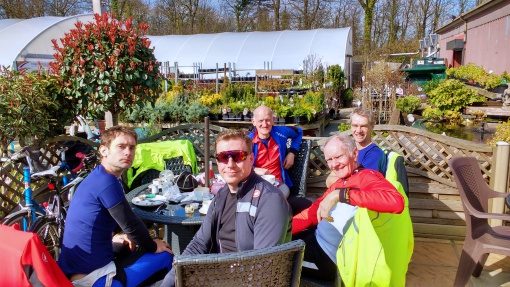 With a long overdue forecast of good weather, there was a good turnout of 14 EGs at Low Bridge.  Our esteemed leader had sent in a sick note, complete with his mum’s forged signature, saying that David wasn’t able to attend today because he was suffering from his oven being cleaned!  Hmmm! So, we were all wondering where we could possibly go today. At 10.05am, Nick suggested Tadcaster.  So Tadcaster it was, and off we went. Well, off went the A team to Tadcaster, but the B Team didn’t get there, so they must have decided on another destination.

Once we crossed the Knaresborough by-pass, the touch paper was lit and the 10 strong A team immediately split into two groups. The faster A+team (7 initially, then 6) sped through Little Ribston and Cowthorpe, passing lots of other Wheel Easy cyclists on the way.  As we crossed the A168, a large group were turning down the slip road after some indecision, and just ahead of them we passed Max G.  I thought I was being helpful letting Max know that the others had turned off, but soon after we overtook yet another group, so apologies to Max if my information was completely inappropriate.  We continued apace to Tockwith, where we turned onto Rudgate and Team Captain, Chris B, instilled some discipline into the group by organising a chain gang so each member took a short period on the front before moving aside and slipping to the back.  Back home, I checked my Garmin data, and found we’d covered the 14 miles from Knaresborough by-pass to Tadcaster in 45 minutes, averaging 19 mph. five of us staggered into The Lemon Tree and when the waitress asked for our drinks order, Marvin replied “a stiff whisky”.  Minutes later Geoff arrived, and he replied “amphetamines”.  “What have you guys been doing?” enquired the bemused waitress, to which the reply was “Dying!”

After refreshments in Taddy, the reunited A team, now joined by Graham from Whixley, split into another 2 groups: the 5 who needed to get back home early, and the 6 who had all-day passes.  The latter went on to York.  We hit extensive floods in Acaster Malbis where the road goes alongside the River Ouse and after some minutes of pondering, and admiring, we had to accept there was no safe way though, so turned round and found an alternative route to Bishopthorpe and to Cycle Heaven for lunch.  We then followed the cycle path alongside the river through York, with lots of evidence of the recent floods, large areas of silt were deposited on the path and the river bank.  I’ve never experienced anything quite like it & Geoff described it like cycling into a sand dune: you just came to a sudden halt. Wheels and mudguards got completely clogged with the silt – so bad that both wheels completely locked.  We had to take the wheels off our bikes to remove the impacted silt from inside the mudguards.  We therefore diverted onto the A19 for a few miles before returning to the usual route via Beningbrough (tea stop, of course) and Aldwark Toll Bridge.  I arrived home at 5.45pm.  It had been a memorable, exhilarating and hard ride in wonderful weather.  68 miles for Harlow Hillbillies.    Eric. 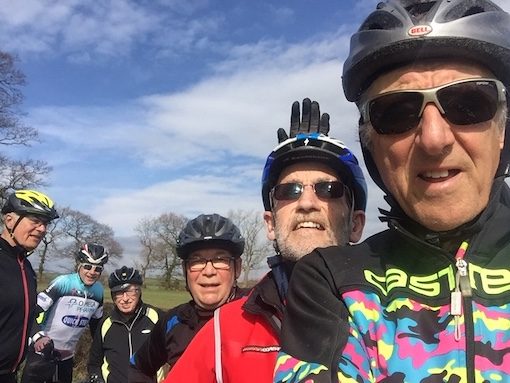 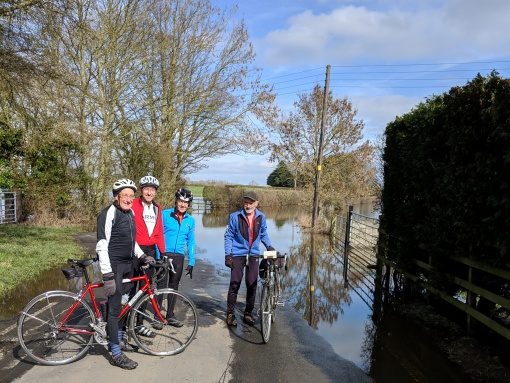 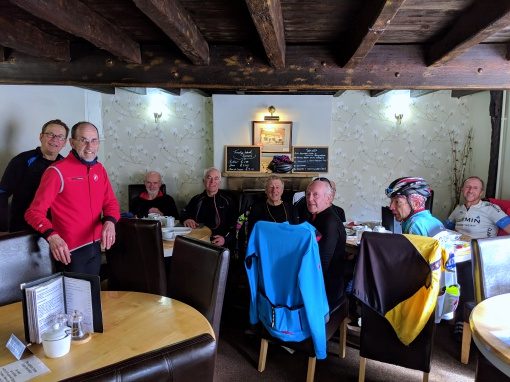 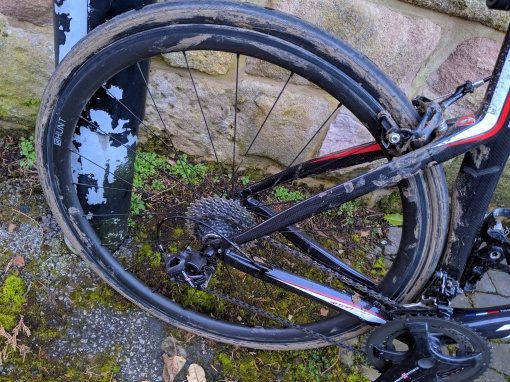