It was cool, dull and slightly drizzly at the Showground, but a large-ish group were up for the Wanderers’ ride. Yvonne D immediately volunteered to take some of the Wanderers the opposite way round from that shown on the website (that’s up Jewitt Lane; masochists…). 11 of us set off the right way round to Follifoot where Mike the vet and Anna were waiting for us. On to Spofforth, where Al Davies was waiting for us at the roundabout, and then on the Harland Way towards Wetherby. One of our group had a puncture on the Harland Way, but it was fixed efficiently with the help of Mike Wills (who was riding his sit-up-and-beg red electric bike, looking like the postman he used to be…). Over the Wharfe and along the cycle path towards the roundabout, then along the nicely-surfaced road with a following wind towards Bramham. Right towards East Rigton and then right again towards Collingham past the pig farm and down Jewitt Lane. Across the A58 and over Linton Bridge, past the posh houses and into Wetherby, where Dennis left us. Refreshments in the Shambles, but it was a bit of a shambles, as we could not get everyone outside the same café. The service at our café was faster than that at the other one, so our sub-sub-group left Mike the vet and Anna, Liz Pugh, Helen and one other (Nick?) still eating. We somehow lost Mike Wills at that point, because when we got to Wood Hall Hotel there was no sign of him. Mike Smith tried to ring him without success, but said that Mike W knew his way around everywhere, so we shouldn’t worry. On to Kirkby Overblow and back along the ring road via Rudding, where we met up with some of Yvonne’s group. The traffic lights at the bridge over Crimple Beck were kind to us before we faced the Showground hill. Joe 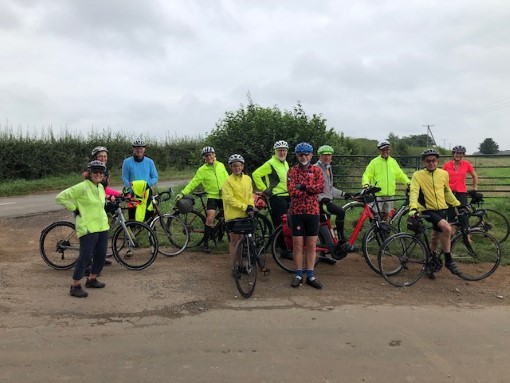 Nice group of 8 cyclists easily led, but never astray as they know the way, navigated the path around service vehicles on the closed lower section of Yew Tree Lane and onward to Kirkby Overcast.  We cracked on to Collingham and up Jewitt Lane and along Thorner Road where we caught up with another couple of WE riders and passed the Joe/Geraldine peloton coming the opposite way.  Even from Clifford, the group could smell the beans at Harts in Boston Spa.  It’s a small café with excellent coffee, swift service and very pleasant staff – the more hardy amongst us braved the elements to sit outside and watch Boston Spa life shuffle by.  The tarmac cycle path to Wetherby is a luxury – so wish every road was as smooth !  At Wetherby, we discussed our route back and 4 of us stretched our legs to return to the Showground via the Deightons, Little Ribston and Follifoot whilst the other 4 returned at a more relaxed pace.  37 miles with pleasant company. Yvonne D. 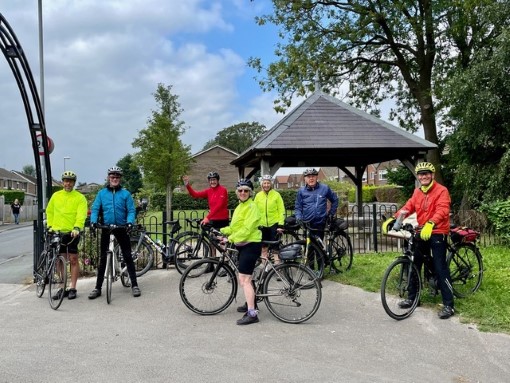