A coolish morning at the Showground found seven of us up for a shorter ride; Jean, Sue, Dennis, Steve, David, Paul and myself were soon on our way to Low Bridge, Abbey Road and over towards Goldsborough. Coming out of Goldsborough to Flaxby, the traffic gods were with us and we got across the A59 unusually quickly ! (It can take ages to get a safe gap, even on a Sunday.)

All quiet up to Arkendale, with a brief pause to see that the Tiger Inn will be opening again in late October after it’s big fire last year. On over to Farnham and Lingerfield where Sue left us (the only one actually taking the advertised route !). We saw the fake Banksy in Scotton before meeting a trio of tandems on the Ripley Road and heading round to Nidd via Brearton.

Ripley village was quieter than expected, but full of lots of Pig Scarecrows ! The Food Festival was busy though, and the funfare in full swing. After a quick coffee at the mobile stall at Bilton Lane we all went our separate ways. 25 miles on my clock, and a great morning run. Brian N

The Medium Ride split nicely into two groups and with some having decided to reverse the route it was not surprising we met around the half way mark and took the opportunity for a full group photo. The reverse group had a slight detour at Kettlesing where James was day dreaming and missed the turn, but surprisingly was still the designated leader for the rest of the route. There was plenty of room for all of us at Sophie’s and the sun even managed a short appearance and the contrast to Saturday was quite marked. However we had a good ride in good company and with a good coffee stop and no rain so what more could we want. About 31 miles and some hills!  James G 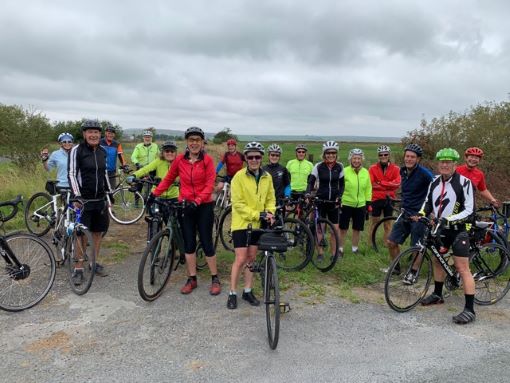