A hardy band of 6 set off in moderate rain having 1) decided against the original route to the Nidderdale uplands and 2) lost three ladies who opted to poddle for an early lunch at Ripley. We did, however, pick up Denis at low bridge where he’d arrived prematurely for his debut with the EGs. We covered about 42 miles on an improvised run involving Knaresborough, Farnham, Arkendale, Lower Dunsford, coffee at Boroughbridge and back via Ripon and Old Scriven in some welcome sunshine. Thanks to Mike and Chris for navigational support! Marwood. 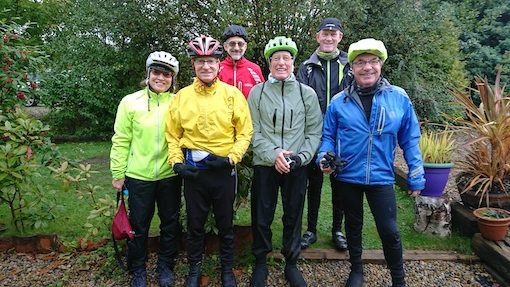 St Crispin’s day is officially the 25th of October, however, how do we know the date is right? who has kept count of the days since 0000? For the purposes of this write up it is unofficially the 16th.

To paraphrase the Bard:

Those EG’s  now a-bed shall be sick as parrots they were not here, and hold their carbon frames and deep section rims cheap whiles any speaks that rode with the EG’s upon Saint Crispin’s day and braving tempest and storm emerged in brilliant sunshine in the afternoon.

To be honest the turnout, even allowing for holiday and other sanctioned absences was poor, 4 of us!  All A team members no B team to keep the pace reasonable to 11’s. Geoff admitted that his rainometer or conservatory roof indicated staying in was the sensible option, Apparently if his better half can’t hear his breakfast order due to the noise from the rain it is too wet to go out! (If Mrs Geoff reads this I made the bit about his breakfast order up)

As ever the route evolved en route, heading for Boroughbridge, gradually extended the mileage using various diversions. We ended up going through the Duxfords having exhausted most comedic references to water, sailing terminology and getting fed up with whistling or listening to ‘Singing in the rain’ being whistled.

We spotted what turned out to be a wheel Easy group ahead and all hell broke loose as big rings were engaged and the pace shot up, determined to be ahead in the queue at the cafe. Dave W revealed later that at that point as he was showered with road debris he did wonder why he was doing 18+ mph but it didn’t stop him hanging on and we arrived together at Plenty a change from Morrisons.  The tea cakes alone were worth it, size of dinner plates and tasty too as was the porridge. There is plenty of room there so we will return in greater numbers I hope.

As forecast the rain eased and we set off with fewer layers. As we emerged we realised that the promised decision on route had not taken place, after some umming and arring Dave W gave in and volunteered to lead. Off we went under his excellent and sometimes surprising but always delightful guidance. One of the good things about Dave’s routes is that you don’t go on ahead because you can never tell which way we are going. As we wended our way big patches of blue sky appeared and the air felt warmer, the roads still wet and in places very muddy. However any risk of skidding was reduced by placment ‘Danger Mud on Road’ signs, that is how it works isn’t it? So much easier than cleaning the road.

Somewhere between Melmerby and Sutton Howgrave I asked Colin if he had ever thought of raising his saddle a little, this discussion was so absorbing that we didn’t notice Geoff and Dave disappearing into the distance and by the time we came to the next turn there was no sign of them. We tried to make out which hedges were next to the possible roads and whether we could see them but in the end we made the best guess and headed off. We guessed wrong but after asking some passers by if they had seen 2 old blokes on bikes and getting a no we found Dave waiting where the two route options joined. An emotional few moments ensued as we were reunited and off we went again this time paying more attention. We passed Thornborough and went through Hutton Conyers before we arrived at Spa Gardens Cafe. For those interested the knitted world champ jerseys are available for a donation to the Dave Rayner fund. We were also approached by a young woman in the cafe but it was only about a forthcoming cyclocross event at Druid’s Temple, details on the face book page soon!

By this time we were clearly overdressed and the selfie we took was of unknown quality and content because the blazing sun meant it was impossible to see anything on the screen of Colin’s phone.

We parted company at Ripon, Geoff and Dave W taking a fairly direct route back to Knaresborough, Colin went off for some extra miles and to ponder saddle heights no doubt, I went via fountains.

A great day all the better for an unpromising start weather wise about 55 miles.    Chris B. 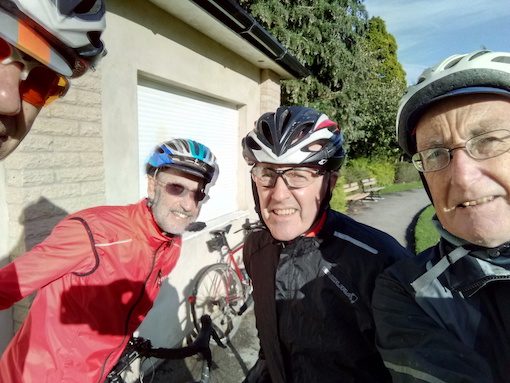 So maybe a dozen had the confidence of the forecast to meet at Hornbeam this morning and we were rewarded with a soaking for about half an hour then dry, then lovely sunshine to finish. So not quite a typical Wheel Easy day but typical in the sense that whatever the weather there is always someone to join you for a ride. Look at these three smiley ladies, well done.
Kevin, Steve, Sue and I headed out on planned route to Little Ribston, with Paul in hot pursuit. We enjoyed the closed road from Follifoot to Spofforth then watched with interest a truck stuck in the mud at Little Ribston. We cycled along the ever narrowing cycle path to Walshford and on to Hunsingore, Cattal and Whixley. Safely through the Dunsforths, no marauding residents, no flooding and the vineyards still intact. Bean at Boroughbridge were a little flustered today and shock horror no cheese scones left. But in the scheme of things these are small inconveniences. Steve left us for more miles, and we sped home through Minskip as the sun came out to make our ride well worth the effort of going out. A good 40 miler on a route we don’t do much these days. Gia 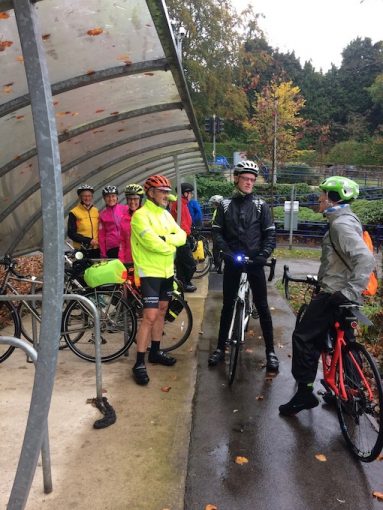 Three of us, Judi, Karen and Liz, decided that we weren’t sure enough of our ‘cycling in a downpour’ skills to join the Wanderers.  So we opted for a very short ride to Ripley for a very long, enjoyable coffee break. We were rather damp and didn’t warm up very much but the rain had stopped for the return journey and the sun was beginning to come through. Possibly the shortest Wheel Easy ride ever? Less than 13 miles!        Liz Ahmad 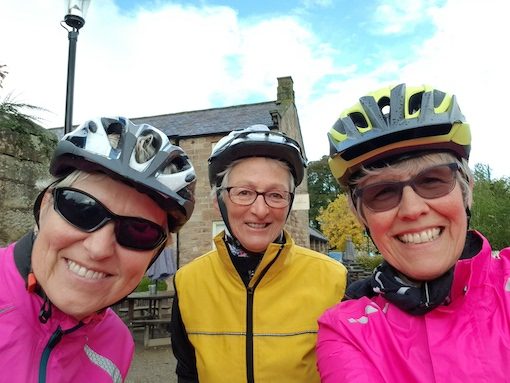 Having booked an advance return train ticket for the official Awayday, I was keen not to waste it and recruited three fearless others to join me on a ride in the Skipton area.  As previously arranged Steve W picked me up from Skipton Station and the day’s adventure began as forecast in pouring rain..  Meeting Lesley and Richard at Gargrave as planned (but in a deluge), we immediately packed the bikes away again and set off for Hellifield in the fond hope that the weather might have begun its forecast improvement a little early.  It worked to a degree, as by the time we’d parked in Hellifield and set off, the rain had eased.  Cool damp miles followed to Tosside (made more interesting for some by my unscheduled close inspection of a hedgerow after arguing with a stick on the road) for early coffee at the Old Vicarage Tearooms.  We arrived bang on opening time at 1030 to find “Sorry Closed” to greet us.  A quick phone call soon roused the staff and we enjoyed hot drinks, teacakes and a scone.  We were joined by a local cyclist from Barnoldswick, who assured us that the correct pronunciation is “bar-lick” and that we wouldn’t find many flat miles ahead.  Warmed and dried, we left the tearooms in almost rainless conditions which continued to improve when at around noon the sun peeped out and stayed with us for the rest of the day. A win!  The Forest of Bowland provided its usual bounty of pain and reward in the form of climbs, descents and wonderful views of Ingleborough ( with and later without its tablecloth) and in the hazy distance The Howgills.  Another win.   Time pressures ruled out a detour into Bentham for a lunchtime stop, which was replaced with a banana break before we set off for the ascent to Cross of Greet, reversing a climb that featured in a previous Awayday.  It was tough in places with some sneaky down-and-ups but the unfolding views across Forest of Bowland made it worthwhile, as did the late lunch stop at the cafe in Slaidburn .  Here we enjoyed various hot food and desserts sitting outside in the warm sun – yet another win.  A local rider shared his new-found delight in his electric mountain bike and the new lease of cycling life it had brought.  It also allowed him to tuck into an enormous dose of cake with impunity.  While we were recovering from the stiff climb out of Slaidburn, he shot past us exclaiming “this is what I enjoy” or similar.  The final miles were marred by a silly navigational error which put Lesley and Richard’s evening commitment in jeopardy.  Thankfully, they made it with ten minutes to spare.  Lesson for ride leader: Garmin  can be your enemy as well as a friend. Always reality check with a map as well.  But the last 10 miles also brought still-warm autumnal sunshine which lit the hills in that way that picks out the relief so magically.  All ended well, eventually, after c 50 miles and c 4600 ft of ascent.  Definitely a day of wins.       Terry Smith 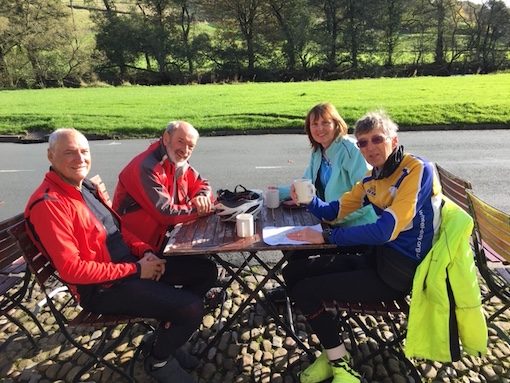 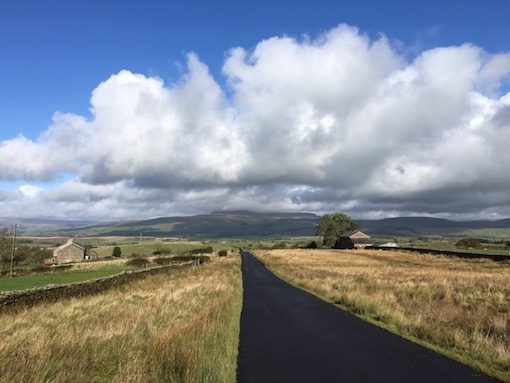