Clearly we didn’t do enough to appease the Sunday rain gods and, yet again, we were down to a few brave/bonkers riders at Hornbeam this morning.
There was a general conflab about re-routing and we came up with three options to make sure we all had a suitable ride. Although I was officially leading a medium plus group to Masham, there was a host of reasons why that failed to appeal – rugby viewing, potato peeling and damage limitation in the getting soaking wet department.
Four men and one woman in black started the published ride, but cut it short at the Drovers’ crossroads and came back via Markington and Knaresborough – a very soggy 25 miles or so.
I’m off to stuff my cycling shoes with kitchen roll again, but could someone burn some incense or make an alternative offering in the hope we might have a dry ride next weekend.

Thanks for showing up guys – it’s always fun whatever the weather.      Helen B 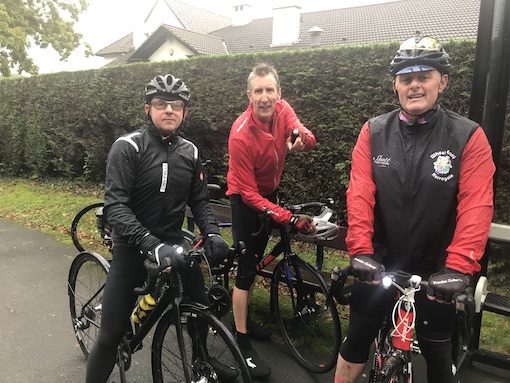 Another wet Sunday but determined not to let the weather get the better of us a few intrepid cyclists decided to brave the downpours. I waited at Bilton Cross for Chris and anyone else who wanted to attempt the listed ride to Masham. The first group of Medium Plus riders arrived but had not decided where they were going due to the weather and told me that Chris was just behind. Shortly after, Chris, Tim and David arrived and after a quick discussion the four of us decided that we would head to Fountains. The mist was quite low and it was not wise to go up high over the tops to Masham on a day like this. The rain was heavy as we cycled along the Greenway and it eased off slightly as we reach Ripley, Glyn went past with a quick hello and that he was off to Fountains. Up Scarah Bank still full of holes and running water we cycled, then turned right at the top and down Watergate Lane to Fountains café, where we met Glyn who joined us for refreshments. After drying out and warm drinks, Glyn said he would cycle to Ripon with us, then head back to Ripley to meet Jen and others who had decided to walk rather than cycle. At Fountains church which was not open, Glyn played his flute in the doorway which gave us some light hearted entertainment. Chris, Tim and I decided to go to Ripon, then on to Boroughbridge and decide the way back from there David and Glyn headed back at Ripon and we three carried on past the racecourse, turned right off the very busy main road on past Newby Hall. The weather had improved slightly and it was mainly light drizzle. Arriving at Boroughbridge we headed into Plenty’s for lovely hot soup, and other goodies. The weather had slightly improved as we cycled towards Roecliffe then on to Bishop Monkton, thankfully the road had mainly cleared of water, as the back road was impassable a couple of weeks ago, due to being flooded. On to Burton Leonard, very steady down the track to the ford which was in full flood. The bikes had to be lifted over the stile as the water was up to the track and it would have been wet feet or knees in my case if we went round the side. A dryish ride back via Nidd, Ripley and the Greenway. 40 miles a tad damp but missed the heavy rain that arrived as I reached home. Liz F 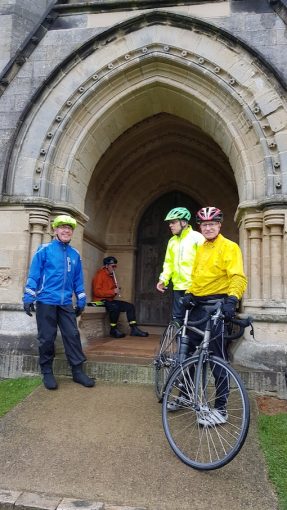 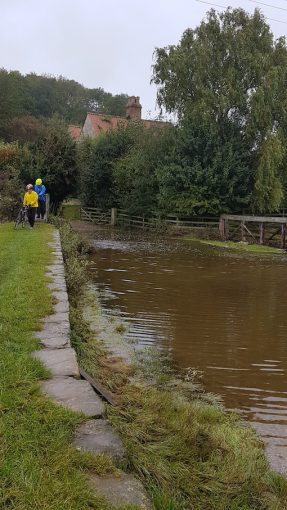 Medium Ride with a Poddler

Poor weather led to a depleted medium ride turnout and those that braved the rain quickly agreed a revised route/destination. So six intrepid members headed for Low Bridge and onto Farnham. Here Mike W and Paul (postman) went for Staveley , Minskip and Boroughbridge while Steve, Corrine , Gill and myself went for Ferrensby, Arkendale , Marton Cum Grafton , Aldborough and Boroughbridge. Despite the longer route we got to Plenty in Boroughbridge before Mike and Paul. I saw them ride past as they thought they were well ahead of us and rode on to meet us. I quickly went outside an a shrill whistle resulted in a sharp U-turn. Nicely seated in Plenty the staff were pleased to see us as it had been a quite day for them. A brief chat on route home resulted in Roecliffe , Bishop Monkton , Occaney Beck and Knaresborough where the group started to split to make our ways home. A wet ride throughout but bearable. As ever with WE a good ride , great company. Thanks. Well done to Paul(who normally Poddles) for braving the weather and us. 32 wet miles. Colin B 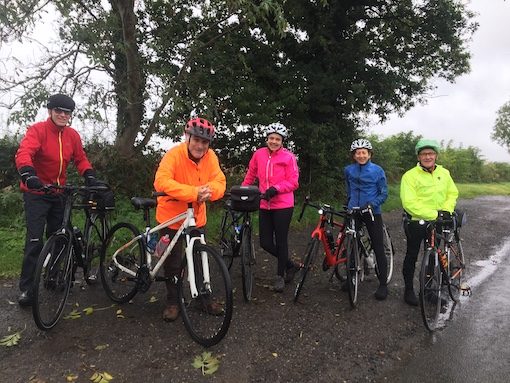