So six of us left first ahead of Liz’s main group. Three Mike’s , Steve , Corinne(one R two N’s) and myself. Leaving Hornbeam on a coolish overcast morning. Quick progress to Low Bridge and Farnham. Started to rain a little as we made our way to Bishop Monkton where we stopped for me to put on my rain jacket and Mike(the vet) to put on his cape. Photo shoot at the church gate. Within minutes of riding the rain stopped. Typical. We made good progress to Roecliffe and Boroughbridge where we arrived at Plenty just as a group of Seacroft Wheelers arrived. Concerned about seating Steve was sent  into the back to sort things out ahead of our refreshments. Mike(the vet) making the most of what was on offer with sausage role(and small salad) PLUS pumpkin soup. Mike was still enjoying his ‘lunch’ when Liz’s group arrived. Fortunately the Seacroft group had now vacated so the was no problem with seating. Suitably refreshed we six departed for Aldborough , Lower and Upper Dunsforth , Great Ouseburn and Marton Cum Grafton. Turning back towards Arkendale (bit of a tail wind now) and upto Farnham where Steve left us. On to Knaresborough and home. Great ride , good amusing conversation and excellent company. Thank you. 36 miles. Colin B 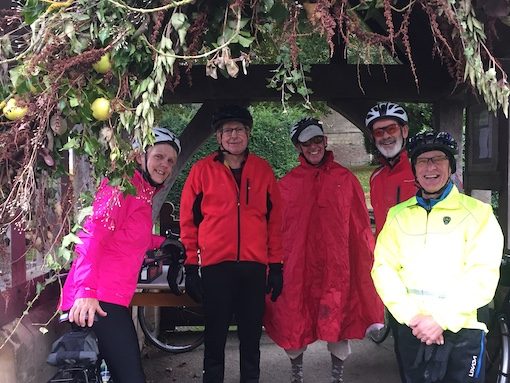 16 takers for the Medium ride today and Mike W kindly took the 1st group while I came behind with the 8 remaining riders. The route was Knaresborough, Farnham, Burton Leonard and into Bishop Monkton where we posed for photos by the stream. Soon we were heading into Boroughbridge and the chosen café was Plenty. Mike’s group were all sat at the back when we arrived but another cycling group left then so there was room for us. After lots of drinks, food and chat we set off on the return journey taking in the Dunsforths, Marton, Arkendale and back to Knaresborough. Probably a bit over 35 miles but one of our flatter rides. Thanks to Mike for leading the 1st group and Joe for backmarking for me. Welcome to Sandra on her 1st medium ride. Liz P 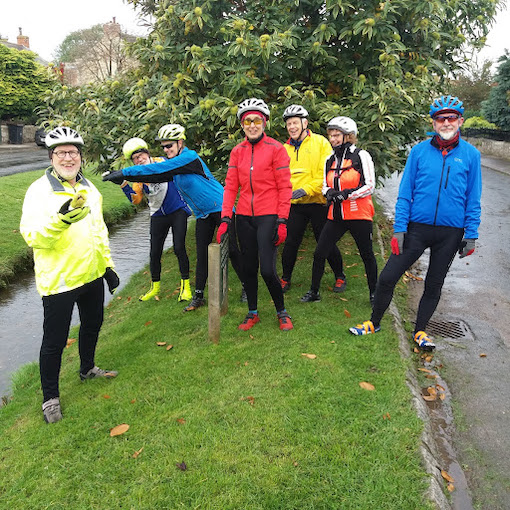 Short Ride Report – Four of us set off from Hornbeam but it is quality not quantity that counts.  We headed for Beckwithshaw where Caroline decided she would do her own thing and headed off.  So that left Bridget, Jill, and me, and by the time we reached Little Almscliff Crag the sun had briefly appeared. So onwards towards Fewston and at the reservoir we met a huge group of walkers enjoying the Autumn Colours, but we knew that up the hill and round the corner was an even better sight – the Visitor Centre Tea Room.  We sat inside which meant that we were sheltered from the heavy shower when it came.  Well refreshed by large helpings of homemade cake we went home via Kettlesing and Birstwith, Clint and the Greenway back to Harrogate.  We missed the rain and cycled 24 autumnal miles. Martin W. 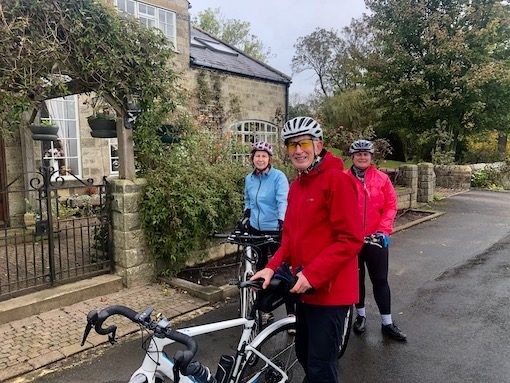 Helen led a” brisk ” paced group on the prescribed route, stopping for coffee and breakfast paninis at The Deli in Boston Spa, where we caught up with the fast group.

We returned to Harrogate via Collingham, Linton and Kirkby Overblow into a stiff headwind.
44 miles Julie E. 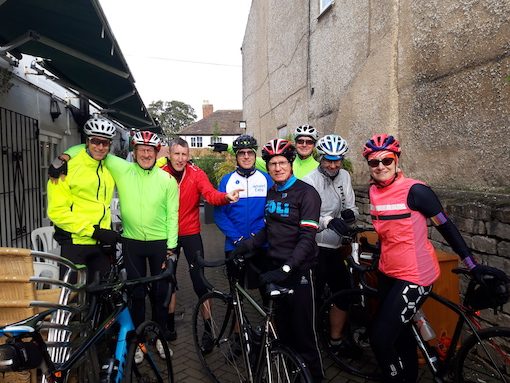 Not fancying the medium plus ride into North Leeds six of us decided to do an alternative route. We followed the published route to Eccup via Kirkby Overblow and Weardley Bank then headed to Bramhope Deli for coffee and rascals. After a long stop we headed down Kreskeld Lane onto the A659 road to Pool where we encountered quite a few dangerous drivers. From Pool we headed home via Leathley, Stainburn and North Rigton. An enjoyable 30 mile ride in good company, although probably too many busy roads than we are used to.       Paul 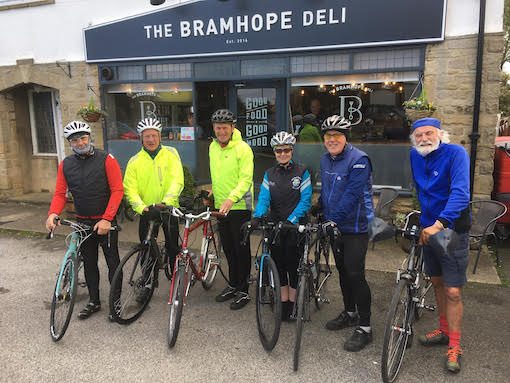 Plan A: Six riders started out to ride to Boroughbridge, Kilburn and Coxwold et al.  After leaving Boroughbridge we noticed that the North York Moors were shrouded in rain clouds.

Plan B:  Avoid the rain and head north for Bedale.  After several miles of battling into a strong headwind a revised plan was called for.

Plan C: Head for Thirsk and seek out warmth and refreshments.  This was a good plan but the downside was we had to ride in drizzle for much of the time.

Plan D: Head back to Harrogate via Dalton, Sessay, Boroughbridge and Minskip.  Best plan of the day, but we still had the rain to contend with.  PCJ