Glorious weather had lured lots of cyclists out to ride from Hornbeam today. Four people emerged from the confusion and set off to Low Bridge to meet by arrangement a new rider called Leslie…male/female we had no idea. Lots of EGs lurked at the end of Abbey Road…but no Leslie. We waited ten minutes then set off for our furthest destination…. Bramham. So off to Kirk Deighton, Wetherby, lovely Thorpe Arch Village, Boston Spa to Clifford, where we went exploring a new route…initially a pleasant wander through a stable…. then a dead end and threats of an impasse of a beck. Having been given directions to our real route we did our cross country back to the planned path and back to scones, toasted tea cake, bacon and egg sandwich and a mound of cheese on toast in the Shambles in Wetherby. Staggering to our bikes we amazingly managed to get back to Harrogate despite very full stomachs. A lovely cycle with lively company. Thank you for playing out so nicely. 29 milesish. CG 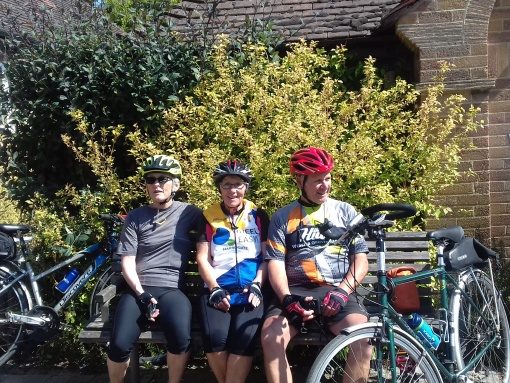 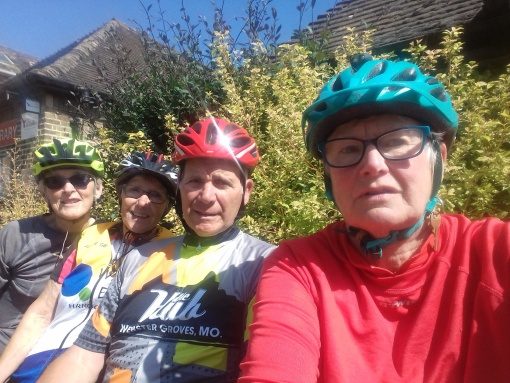 As it was an Away Day, I made my way to Hornbeam assuming there would be just a few people there. I couldn’t have been more wrong! While the groups sorted themselves, I realised there were 28 Wanderers. Fortunately, the theme of the morning was ‘splinter groups’. Steve and company decided to head for Brimham as they had done the suggested ride earlier in the week. Brian volunteered to lead a group, so the remaining 24 made their way to Low Bridge. Here we reconvened and Brian set off with the first group, supported by Mike P as ‘route adviser’. We agreed to meet up at Bishop Monkton. By the time our group arrived Kevin and company had ‘splintered off’ towards Ripon, lured by the thought of coffee. All those remaining posed for the team photo. Then Brian’s group set off, never to be seen again. Although we had reliable reports that they’d made it to Ripley. Our group meandered along in the sunshine, enjoying the country lanes. The final ‘break away’ happened at the Drovers. Dennis and a group headed straight back to Ripley. The rest of us made our way down and up through Shaw Mills to Hollybank woods. At the request of Angela, we stopped for another photo opportunity- this time of the ”Bluebell girls and friends’. At Ripley, sitting outside, enjoying delicious cakes was a delight. Moreover, we met up with people from all the ‘splinter’ groups. Thanks to Brian, Mike P, Angela and Dennis for leading and back- marking. A great morning! I hope everyone enjoyed it as much as I did. Alison N 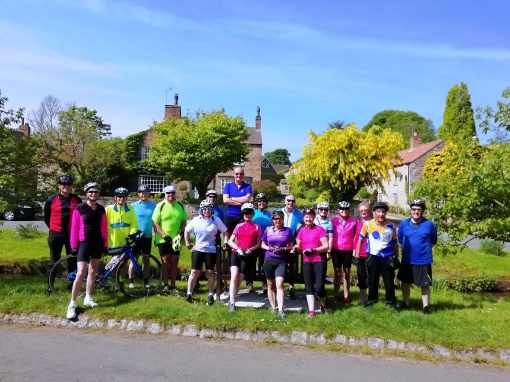 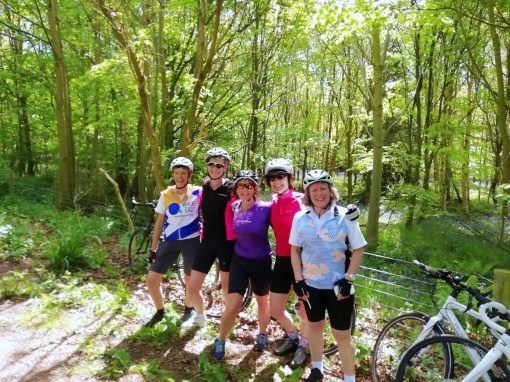 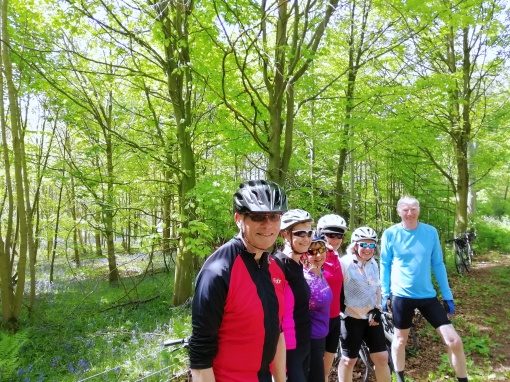 The few Long Riders combined with the Wednesday Wanderers Faster group for a ride to Cawood. Leaving via the trusted route of Burn Bridge, Kirkby Overblow, Bramham and Stutton we arrived at Cawood. After a brief discussion it was decided to head straight for Naburn Marina for lunch. While having refreshments at Naburn Helen informed us that she was on a mission to do 100k today, even if it meant riding around Harrogate in ever decreasing circles. When we reached Copmanthorpe the main group made for Askam Richard while two of us set off for York. The Lone Long Rider then continued on to Beningbrough, Aldwark, the Dunsforths and Boroughbridge before returning to Harrogate. PCJ 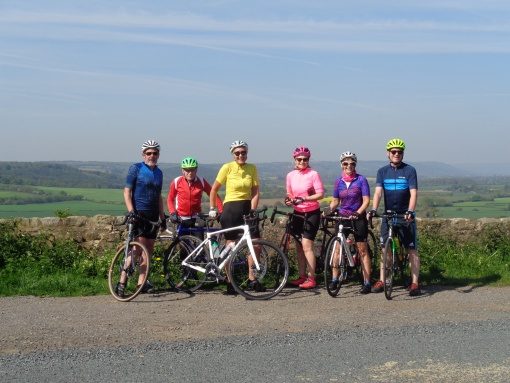 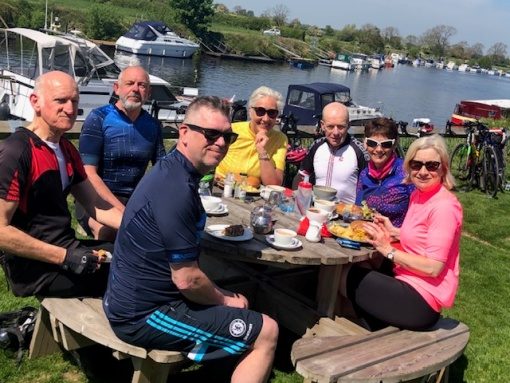 It was fantastic weather for our Awayday Ride in Wharfedale and Wensleydale. Starting at Kettlewell we followed the valley up to Buckden and then over the great climb of Fleet Moss. The drop down was treated with some caution before we arrived in Hawes with hot brakes to enjoy lunch at the Cyclist’s Café at the Old Station. After a lengthy rest we managed to wind up the legs again and crossed the river to take the back road passing through Askrigg and then turning to cross Aysgarth Falls. We then headed to West Burton and at Colin’s suggestion we had a stop to look at the magnificent Falls – something your ride leader had never seen despite having cycled and walked in the area since 1972! Then it was heads down time to climb up Bishopdale, a climb all agreed was the toughest of the day, especially after having already climbed Fleet Moss. Finally, we dropped down to Cray, Buckden and back to Kettlewell for a nice cuppa. 40 miles, and I don’t know how much climbing because I forgot to turn off Strava and it recorded the first 12 miles in the car going home. Does it really believe I can cycle that fast?!! Martin W. 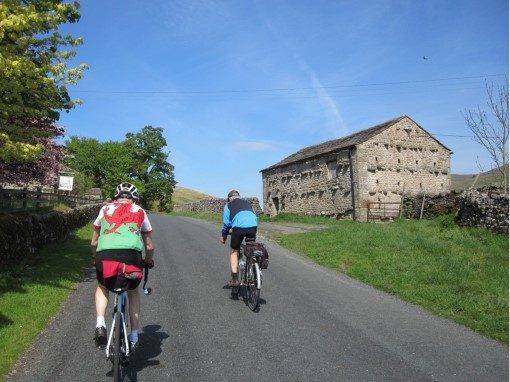 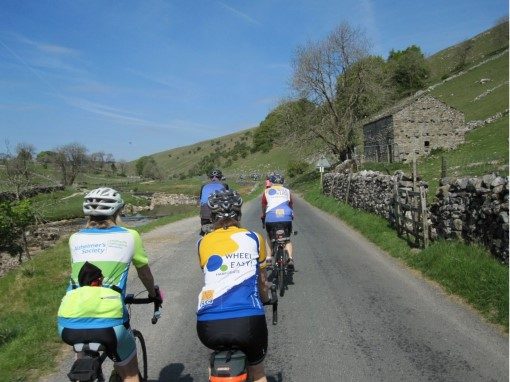 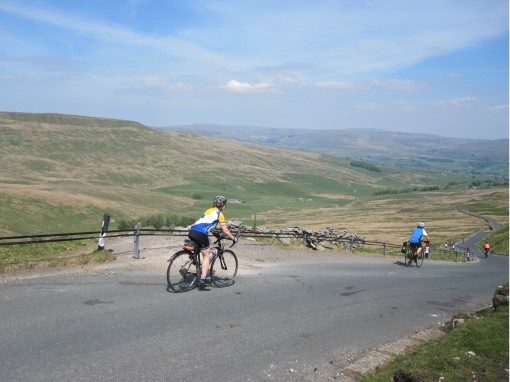 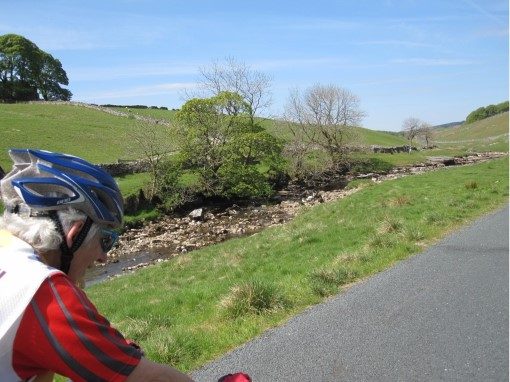 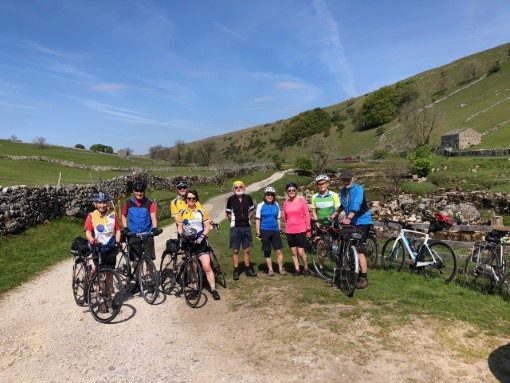 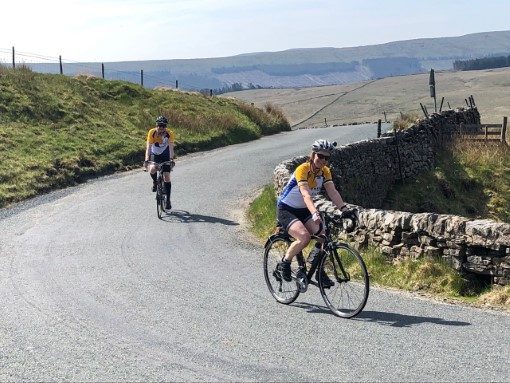 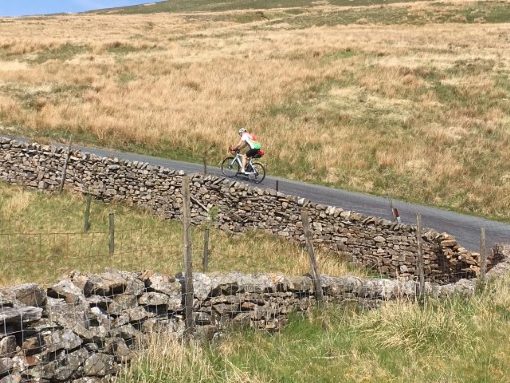 Was it the leader or was it the hills which reduced the faster group to 4 assembled at Kettlewell car park? For certain it was not the weather which remained glorious throughout the day for our romp over Fleet Moss and Kidstones. Travelling towards Oughtershaw we debated whether the river was still the Wharfe and yes, it is. An uneventful climb and descent to Hawes where we decided to try the Creamery – good choice!
Refreshed we started out of Hawes but our progress was short lived as Eric reported a puncture to his tubeless tyre. Back to the Station bike shop which provided help and advice to remove the thorn and the tubeless tyre magically healed itself. The so-called fast group was now behind on the road. It took until West Burton to restore the natural order though from there to the top of Bishopdale the groups seemed to change composition with smart aero bikes to the fore.
Lovely downhill descent to Buckden and then the niggly headwind back to Kettlewell for well-deserved ice creams and cake. Terry then put the rest of us to shame cycling back to Skipton station from where he started the ride. Chapeau!

On a glorious warm, sunny morning, seven riders were ready to set off at 10.15am from Kettlewell. A steady pace was set as we made our way to Buckden passing the second group. Leaving Wharfdale and cycling along to Yockenthwaite and Langstrothdale. Then it was time to climb Fleet Moss and into Sleddale at a much slower pace! From the top there were plenty of nice views of the Dales, then it was a nice downhill run to Gayle, Hawes and Wensleydale where we had our coffee stop at the cycle café in the old Hawes railway station. The return was towards Askrigg then dropping down past Aysgarth Falls where the fast group suddenly appeared from behind due to a rider having a puncture. We cycled through Bishopdale with a good flat’ish run before the hills again and the steep Kidstones Bank, meeting up with Richard Leake at the top. Then the downhill to Cray, Buckden and Kettlewell where a few riders went straight to the café for ice cream. A very good day out, in good weather, good company and Yorkshire scenery. Chris R. 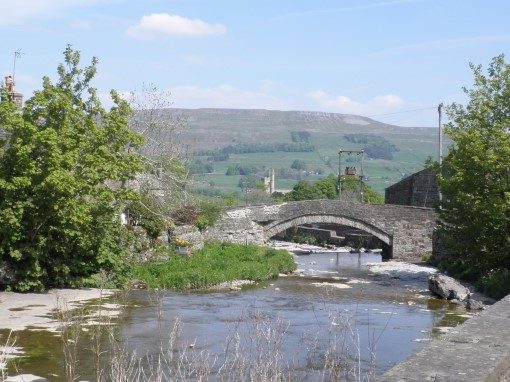 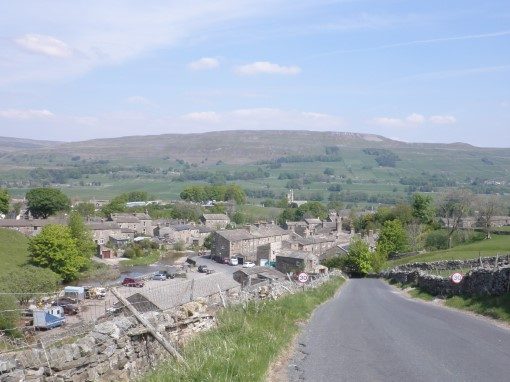 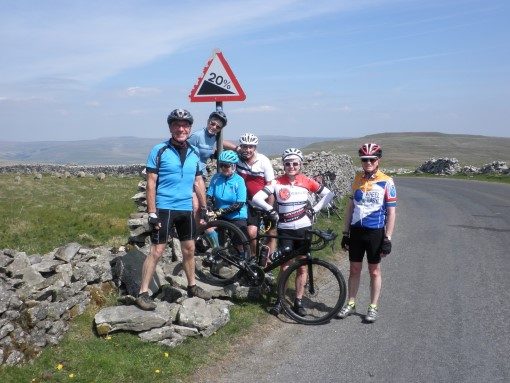 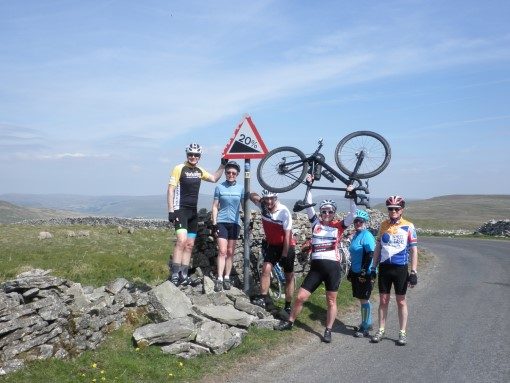 It is May and the buds are all out, even so it was Perfick cycling weather. We had a good turnout at Low Bridge and it was good to see Roy out with us again, whilst waiting in the sun (not to hot and no wind) greeting were exchanged with other groups from Wheel-Easy.
Spa Gardens café was chosen as our first café stop for a chat in the sun and to decide where the teams were to head for. On the way we passed another Wheel-Easy Group led by Alison, then the hard bit drinking tea and coffee in the sun, (see photos).
After the sun soaking, Dave Siswick to the “A” team Northwards? Norman to the “B” back to Harrogate via the shortest way, and Dave Watson took the “B+”team (Bill, Dave P and Nick), North to West Tanfield via some quiet sun shaded lanes. A relaxing break in West Tanfield, then back via Wath, Hutton Conyers, Copt Hewick, Littlethorpe, Bishop Monkton, Farnham and home. A slight wind developed on the way back, but nothing could spoil the weather and the day. Dave P 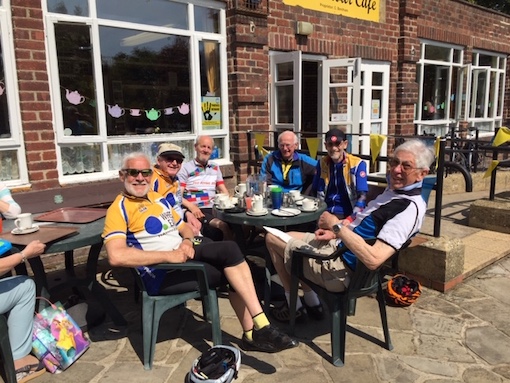 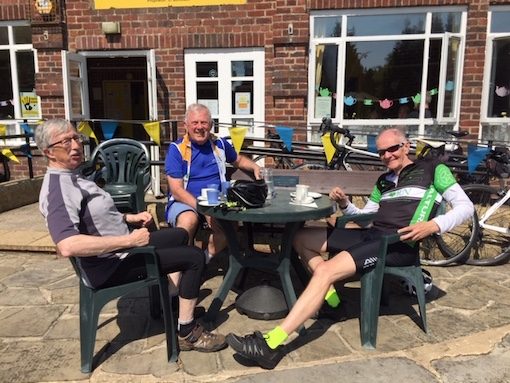 EG’s A, A Plus (and Fred Whitton Challenge)

From Ripon Spa Gardens Sun Parlour, six riders opted for the ‘A Team’ ride northwards to Bedale for lunch; Allan, Dave S, Marvin, Dave Wi, Peter N and Graham. The ‘quick’ route was chosen and soon dispatched, via Hutton Conyers, Wath, Kirklington, Carthorpe and Exelby. Allan had not heard the suggestion to go ‘steady’. It was steady as in consistent, but quite brisk. Tour de Yorkshire bunting still out in Bedale to welcome us and we piled in to The North End café for our lunch.
Split intentions emerged over the refreshments. Four chose to return via Well towards Ripon and back to Knaresborough.
Peter N and Graham extended the ride northwards to try new ground for them. So their route went via Leeming Bar and part of National Cycle Network Route 71 to Kirkby Fleetham, Great Langton and Thrintoft (west of Northallerton). Then Ainderby Steeple, Newby and Kirby Wiske to a third and brief café stop at Arabica in Thirsk Market Square. Good coffee and Terry’s Chocolate Orange Brownie, mmm. Then off through Sowerby, Dalton, Sessay on NCN 657, before we too split up near Thornton Bridge, to return home ( Graham starting to feel a bit transcendental by this stage). Wildlife Report: Stoat, Brown Hare, and many Yellow Hammer and Skylarks singing.
75 miles, total ascent less than 2,000 feet, staying as we did, not far from the Ure and Lower Swale.
However, compare that with Graham’s Brother-in-Law Nigel who successfully completed the Fred Whitton Challenge in the Lake District on Sunday: 114 miles with about 14,000 feet of ascent over 9 of the toughest passes including Honister, Hardknott and Wrynose, maximum height nearly 1,500 feet. Chapeau Nigel!!!
Graham W, Whixley Wheelers 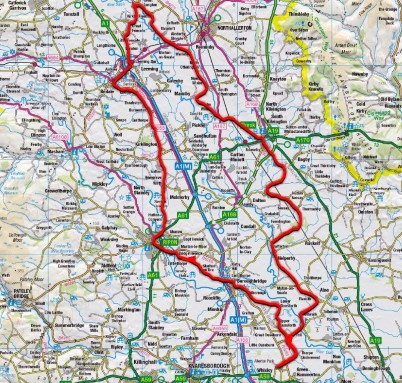