‘A Team’
After a fast adrenaline burn-off, the first stop of the day was The Lemon Tree at Tadcaster. An extra EG joined them there to make 8 in the ‘A Team’. The Group photo opportunity came as the ‘B Team’ wheeled in to take our places. In improving sunshine and a gentle south-easterly breeze, the ‘South of the Wharfe’ route to Ulleskelf, Ryther and Cawood soon passed by. Then north-east over the Ouse at Cawood Swing Bridge to Stillingfleet and Naburn. Chris ‘Beanie’ (Omega Pharma Lotto Quickstep) took a little deviation to enquire of lost/found glasses at the Coffee Station, but no luck for him there. For once the Team did not circle Bishopthorpe but soon found themselves ensconced in the welcoming arms of Cycle Heaven for lunch. Your reporter can recommend the Jamaican Special, but this and another purchase of cycle accessories led to his reputation for ‘last out of the door’ being continued. 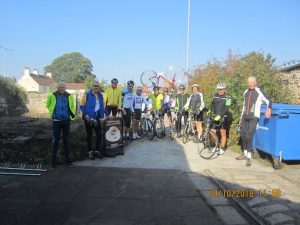 York central was alive with people sunning themselves in the beautiful weather, including many taking river-boat trips. The next part of the route was the cycleway each side of the Ouse, popping out on the metalled highways west of Skelton. Two main groups formed on the next section, with the last rider struggling to keep up with the pace. However, we re-grouped and stopped for a Team chat at the bench near Great Ouseburn, pondering tactics for future rides. Here, Chris was to aim for Boroughbridge, Graham returning to Whixley. The remainder, Dave S (RadioShack), Dave W (Royal Navy), Colin, Geoff, Tollerton Tim and Marvin heading back through Marton and Arkendale to Knaresborough. A great day out, around 60M. Graham W

Well the BBC weather forecast had little suns on the hour, however on Harlow hill it was thick mist, this seemed to clear at Hornbeam, but was just as bad at Low Bridge, well it was for Dave P and Marvin till they wiped the moisture of their glasses.
Odd behaviour is not always age related, as will be shown later.
Caroline and the Poddlers then joined us and after greetings were on their way.
York was chosen as perhaps a destination, so it was on to Tadcaster, and the Lemon Tree was chosen as the first coffee stop, and away went the “A” followed by the “B” team consisting of Bill, Bob, Dave P, and Theo ie 75% VEG`s.
We were caught up by Chris who was told the destination, and away he went, was that a sonic boom?. 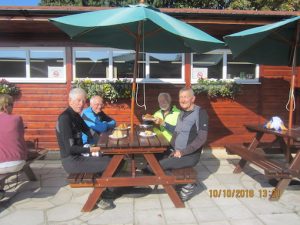 Theo led the pack into Tadcaster with that superb cadence of his, due to many years of riding fixed wheel.
Coming in to Taddy we met up with Caroline and the Poddlers, but they must have been riding at more than a Poddlers pace because we had not hung around.
They went on to another cafe while we pulled in to the back of the Lemon Tree to store our bikes only to find the “A” team about to depart for the York area.
(see photo).
On entering the cafe a young man on the staff asked me if anybody had left a very stylish pair of sun glasses, and if not he was having them, they belonged to Chris, so it is not an age thing.
Bikes were then locked up ?? and it was Toasted Teacakes and liquid caffeine for the four of us.
Minor panic, Bill could not find his keys, how would we unlock the bikes ?.
But the Cycle Fairy was on our side, the bikes had not been locked up, but even so Bill would have to return home to try to get in to his house, but then the Cycle Fairy struck again and the keys were found on his person
(that`s because he is a good lad), so the four of us headed for Catterton, Bilborough and Askham Richard and the Nursery Cafe to introduce Theo to the cakes, we know it is not far from Taddy but we did not need to twist Theo`s arm very much (see photo) but we are the VEG`s and we can caffeine and cake for England.
Then home via Tockwith, Cowthorpe, Spofforth and the showground.
A great ride in superb Autumn cycling weather, bright sun, slight breeze, with no power assist only our legs, mileage would range between high 40`s to low 50`s
Look forward to hearing where the “A” team got to.
Dave P 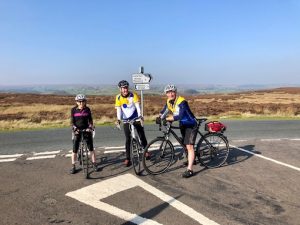 Moors Route. That was a chilly start! Despite the forecast of bright sun all day the morning started with quite thick cold mist and a chilly ride along the Greenway. Seven of us had to opted to join the Wednesday ride heading north from Harrogate. After Ripley we climbed up Scarah bank and turned down to Markington with the sun making every attempt to break through, but the ride on to Bishop Monkton and Boroughbridge was quite chilling at times and we were grateful for a hot coffee and scones stop at Bean. At this point we suffered a traumatic 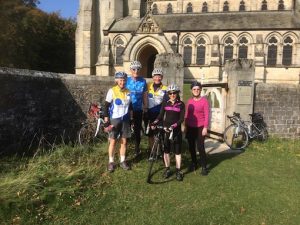 confrontation when it was discovered that all the cheese scones had gone, except that is for Jill, who had sneaked in early and got the last one. James and Martin had to placate the ensuing troublemakers who continue to grumble for much of the ride, and exceptionally a yellow card was issued. Then the Sun came out! All was well and we continued on our way to Skelton and Ripon, then following up through Studley Park where the group split off and four of us headed through the lanes up to Grantley. From there the road up onto the moors was quite delightful with the sunshine and the autumn colours coming into full full splendour. We finished the ride by turning across to Fellbeck and Brimham rocks before turning down to Burnt Yates and then Sophie’s for afternoon tea before riding back home. 57 glorious sunny miles. Martin W 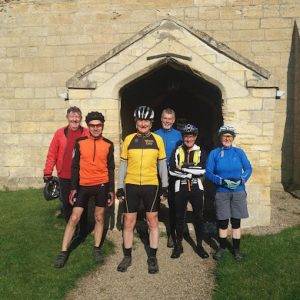 Twenty five or so Wanderers met at Hornbeam on this beautiful autumn day. We split into three groups. Angela, leading the third group, nearly lost one of her nine lives at Hornbeam traffic lights but fortun

ately escaped unscathed. We sped through Pannal, though at least one group did a detour via Burn Bridge. The two leading groups took a wrong turn on the bypass so had to create their own route to Wetherby. We dodged the dog poo under the bridge onto the Wetherby to Thorp Arch cycleway and all met up at the Coffee Pot at Thorp Arch Retail Park. It was warm enough to sit outside with the carp. We re-grouped and found the Roman road passing pigs with piglets on the way! It was suggested the Little Ribston road was a quieter option the North Deighton and so we wandered on to Spofforth. We 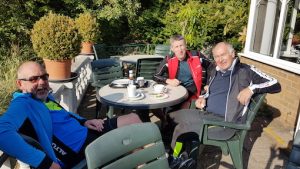 temporarily mislaid two members of our group there and met Group 2 who had done an (intended) detour to Tockwith. The lost were found and we made our way back via Follifoot and the showground. We finished with more than half the group present which didn’t seem bad!
A lovely ride on a beautiful day. AR.

As it was going to be an “Indian summer” day, leader decided it would be a good chance to do a long ride, to Tadcaster. It was not scorching your eyeballs out at Hornbeam, and it was still cold and claggy
when we reached Knaresborough. However by the time Wetherby was approached the sun made an appearance, and the day got better and better as we cycled along the cycle path to Wighill. Then off to Tadcaster, after debating which café to stop at. Graham was lusting after an egg and bacon sandwich in 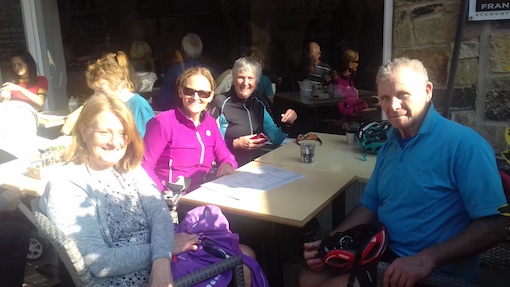 Wetherby, which was just as well as the EGs swooped past us, making a bee-line for the Tadcaster café. So onwards and upwards through Bramham, along the cycle path to Wetherby. We sat outside enjoying the sunshine and a variety of dishes. The stop was an extra long one today, as interesting stories were told about long lost families, schools in common that were attended, and realising that you were cycling with your daughter’s French teacher of years ago. Graham had had enough of chatting and needed to be somewhere, so he zoomed. We four ladies cycled to Foolifoot, whereupon Barbara zoomed. I left Caroline and Rachel to return to their homes, while I tackled the showground hill, and returned to the car. It was a truly lovely 37 mile ride in fabulous weather. Jen A 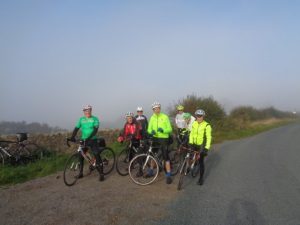 Given a forecast of clear skies and light winds, and the absence of likely mutineers at the prospect of an off-road section, we set off with a plan to ride over Ilkley Moor on the ‘road’ from Riddlesden to Ilkley.
We headed via Kirkby Overblow to enjoy glorious views of Wharfedale; alas the mist didn’t clear in time for that early delight. However, by the time we reached the top of the Chevin the sun was out for good and we couldn’t have asked for a better autumn day.
Having started with eight riders, Stuart disappeared on the climb out of Menston. E-bike Dave went back to find him and told us to carry on and not wait. I hope you both got back safely. Dave R then headed for Ilkley and Burnsall, leaving five to continue to Hawksworth, Baildon Moor, Eldwick and East Morton and on to the ascent of Ilkley Moor. From the top there is about a mile of rough dirt track; fortunately (for me) the views over Ilkley were tremendous and no insurrection ensued!
After lunch at Outside the Box, we returned via the valley road, Askwith Bank, Timble and Little Almscliff.
50ish miles, lots of hills and a unique route (ie unlikely to be repeated!)
RL 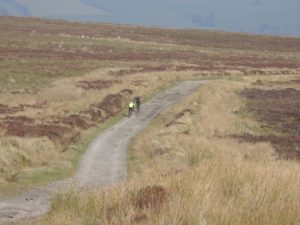 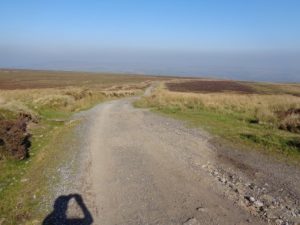