Rain kept everyone away today. Just me then.
I had a little ride to Knaresborough, Abbey Road, Wetherby Road, Chain Lane, Halfpenny Lane, Scriven, back to Knaresborough and home via Beryl Burton.
About twelve miles getter wetter and wetter as the day went on. Nice hot bath now – well deserved I think. Jean B

Drizzle at Hornbeam, and so to the eternal question: go home, or gamble on the likelihood of drizzle or downpour? A few sensible souls went home. Six – Dave M, Jill F, Kevin D, Margaret, Paul T and me – went for the gamble. We agreed on a short-ish ride, to Little Almscliffe, across the A59 and on to Hampsthwaite, which should have improved our odds. It didn’t. Arriving at Sophie’s, my Wetometer (patent pending) showed, ‘soaked to the skin, and then some’. We found Gia and Malcolm there, who as far as I could see were completely dry: had the downpour just followed the rest of us round? Conversation ranged across the predictable – a disappointing Expo – and the less so, with opinions sharply divided on the merits of A Star Is Born (2018, not 1976, which all agreed is fantastic). Putting wet layers back on was, as always, the moment when you wonder why you came out at all. The answer is the usual one: even on days like this, it’s great to get out. Many thanks for the company. 35km if we stay in the Customs Union, 22 miles under WTO rules. Justin K

I would not know which ride I went on today as I started out from home assured by Malcolm that it wasn’t raining and we cycled along the Greenway to Sophie’s in the ensuing downpour! There we met Jill, Paul, Kevin and Justin who seemed to have got even wetter going out to Little Almscliff and Menwith but we warmed up at Sophie’s with good coffee and chat and returned safely quite pleased with ourselves. Two others declined the coffee stop but chapeau to them too for going out today. Gia M

The Royal Parks Half Marathon

There was no lack of enthusiasm this morning in Hyde Park despite the near-torrential downpour we were experiencing. Sixteen thousand runners of very varying abilities were lined up at the staggered start.
The grid was arranged in order of expected finish time which we had provided ourselves, and so due to my extreme modesty (ahem), I was well down the pecking order. I was waiting in the line-up for fully 32 minutes before I crossed the start line by which time I was cold and very wet, but nonetheless undaunted. 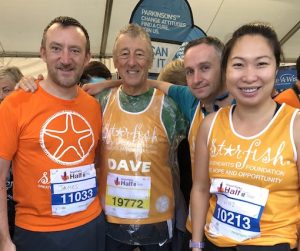 Fortunately these days, your timing chip is only activated as you actually cross the start and so an accurate time is produced.
A lot of the iconic London tourist sites were visited including Trafalgar Square, Big Ben, The Strand, The Mall and Constitution Hill, before re-entering the park at about 6km.
The remaining 7km took a bit of completing, and my time was nothing to brag about, but I was able to run the whole way round.
There was a great atmosphere on this run, partly due to the huge turnout of Londoners forming the crowd, and there were very many cries of “You can do this Dave”, or similar encouragement, which I always find to be a great incentive, when spirits might otherwise be flagging.
My final total funds raised amounted to £400, enhanced by use of the Gift Aid system.
The Starfish Greathearts Foundation and I wish to offer our our wholehearted thanks for these contributions, the majority of which have been from Wheel Easy members.
Thank you. DaveS. 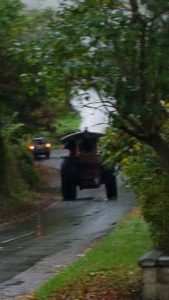 Sunday. Mike Wills turn up to say hello and let us know how he is progressing. Mike is having medical investigations into a benign tumour on his spine. Though still in pain it is not as bad as it has been and 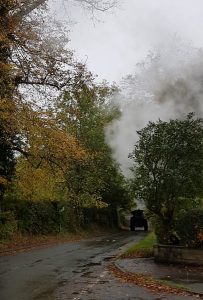 we wish him well and I gave him a card from Liz P and the Wednesday Wanderers. The few hardy folk that turned up deliberated what to do, I decided to carry on with my route and Chris joined me, we were both fully covered in waterproofs. Chris was on a mission to practice for next year’s Liverpool 100 mile race and wanted to get some miles in. The two of us whizzed off down the Greenway, our plan to reach Fountains and make a decision if we would carry on to Masham. The Greenway gave us some shelter and despite the rain, it brought out the autumn smells. Soon up to the Drovers X roads and then down Watergate Lane, which lived up to its name as we cycle through deep puddles. Our decision was to forge on past Fountains on to Aldborough and the rain eased a tad!! Chris had a plan to add a few more miles on and we went up the moors, over the tops. Despite the rain, no mist and the views were good and we could see the moor and views of autumnal delight. Past the golf course where people with no hats on were playing golf, who in their right mind goes out golfing or cycling in this weather? As we swooped down into Masham, a Steam Traction Engine was blocking the road, trying to get the camera out to take a piccie it shot off up the hill, I did not know they went that fast!! Jonny Bagdad’s provided a welcome respite from the rain, Liz had baked beans to provide some energy for the return journey. Stepping outside the rain was teeming down as we bravely got on our trusty steeds for the return journey. Along a very busy B6267, and water running like rivers, down the road we flashed down and turned to Wath, then on to Hutton Conyers to Ripon. The rain eased a little and it was not too unpleasant as we reached Ripon. A quick dash along the bypass before turning to Littlethorpe, on to Bishop Monkton where blue sky appeared. Last little hills up through Markington to the Drover’s X roads and down to Ripley. It was drier and people had turned out for a walk, so dodging, prams and dogs we reached Bilton, Liz turned right for home and Chris straight on. A wet ride of 56 miles, but despite the rain we both enjoyed our adventure as I was determined as nominated ride leader to do my duty come what may!! LizF 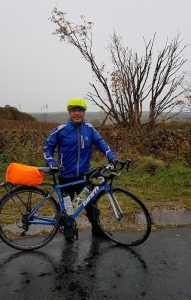 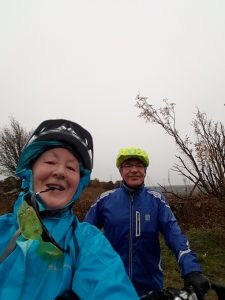